Team Girl Comic Issue 10 starts with a short comic by Gill Hatcher and Claire Yvette (the editors) telling the story of how Team Girl Comic came to be. According to the legend, it all started a long, long time ago (2009) in a mystical and magical kingdom (Glasgow) when Hatcher was selling her DIY comics and noticed the lack of other women making comics. She soon gathered other women from across the realms who shared similar hobbies and talents (and “a slight lack of confidence”) and together they published the first ever Team Girl Comic. The legend has grown, and that brings us to where we are today: the landmark tenth issue of this Scottish anthology of comics written and drawn by women. 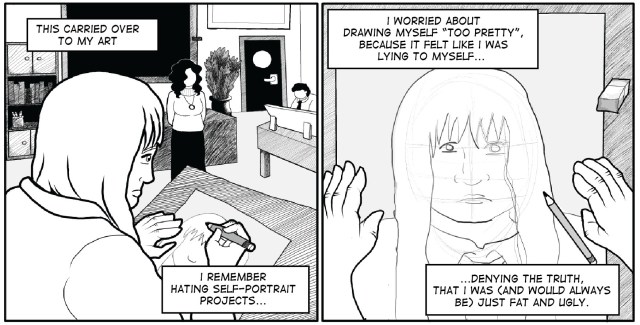 The first comic after that is “How I Learned to Stop Worrying & Love Me” by MJ Wallace. Although the themes of self-acceptance and body image issues are familiar ones in anthologies like this (and I mean, why shouldn’t they be?), I really did enjoy this comic and especially enjoyed the different take Wallace has on the topic. She focuses on how her art and learning to become a better artist also helped her to love both her body and other people’s. Learning to love the human form — in all its forms — through art is a technique that I’ve never seen explored before. 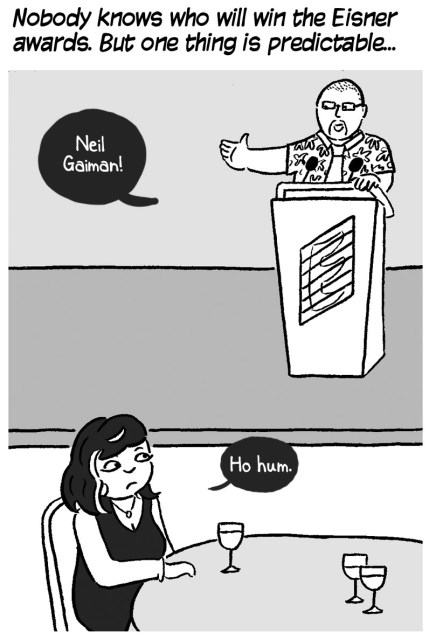 Trina Robbins and Gill Hatcher add a funny, but also topical, comic that talks about how the Eisners, like awards for so many other things, are usually given to men. Like, come on, seriously? I know that the majority of comics professionals are men (which this anthology addresses both in its stories and in the fact that it exists), but women write and draw so many amazing comics! And that’s what this story points out. I really love the way it celebrates women in comics and creates a real sense of community and shared excitement for all the women who are finally getting their due.

A few of my other favorites include the touching and deeply personal “The Art of Getting By” by Jef Sinclair, “Four Easy Up Dos” by Carolyn Alexander (which is exactly as bizarre and hilarious as I could’ve hoped for) and “HC” by Donya Todd which is fast, angry and hardcore. There are also great scifi stories like Amanda Hateball’s “Gems Saltire Squad,” more biographical pieces like Lucy Sweet’s “What Will I be Doing When I’m 40?” and just plain strange ones (in the best way) like “The Winston Churchill Guide to the Zombie Apocalypse” by Shona Heaney. There are really a ton of great comics and I’d be surprised to find anyone who doesn’t like any of them (or even someone who doesn’t like at least a handful.)

I really, really love anthologies of comics like this. Every time I read one, I find at least a few writers and artists whose work I end up falling in love with and following outside of the anthology, which is especially helpful for me in writing this column. Plus it’s just nice as a woman who loves comics. As this collection shows, there really are way more talented, funny and creative women comic creators out there than we think there are. They just need a place to show off their skills.

In order to celebrate the release of this special tenth issue of Team Girl Comic, there is going to be a launch party this Thursday, June 26th in Glasgow. If you’re nearby, you should definitely go and say hi from Autostraddle! It will also be on sale at Glasgow Comic Con on July 5-6. They also have an online shop where you can buy all sorts of merch and older issues of the anthology, and preorder the new issue (which I would totally recommend doing). If you look on their Facebook, they’ve got several sneak peeks of comics that are included, if you’d like to check it out a bit before you buy. They’re also all over social media and the internet.