It’s a problem of unknown magnitude — recent estimates place the number somewhere around 100,000 — but the consequences of the nationwide rape kit testing backlog are clear and appalling. While precincts with budget problems can’t afford the $1,200 price tag that comes with examining them, the attackers whose DNA they may contain walk free; the victims who told their stories to police and allowed doctors to swab their body for evidence have no hope of seeing justice.

The problem is part cultural, part monetary, but only one of those is directly within the power of Congress, which last week looked ready to approve $41 million in grants to aid in kit testing. However, that funding and the other provisions of a $51.2 billion Justice Department budget bill were pulled from the floor Thursday after Senate leaders disagreed over how many votes should be required to approve amendments. Senate Majority Leader Harry Reid (D-Nev.) is expected to return the bill to the floor this week, but any further delays could pose a serious threat to the bill, which must be approved in either the next five weeks or during the 10 legislative days in September before existing funds run out. The House voted in May to approve a similar bill with the funding.

A 2004 Justice Department study estimated there were untested evidence kits from about 221,000 rape and murder cases nationwide. That study, along with a massive awareness campaign from the Rape, Abuse and Incest National Network, helped push Congress into passing the landmark Debbie Smith Act. That bill, which was renewed in 2008 and again this April, has since provided $1.51 billion in funding specifically aimed at clearing the DNA evidence backlog. 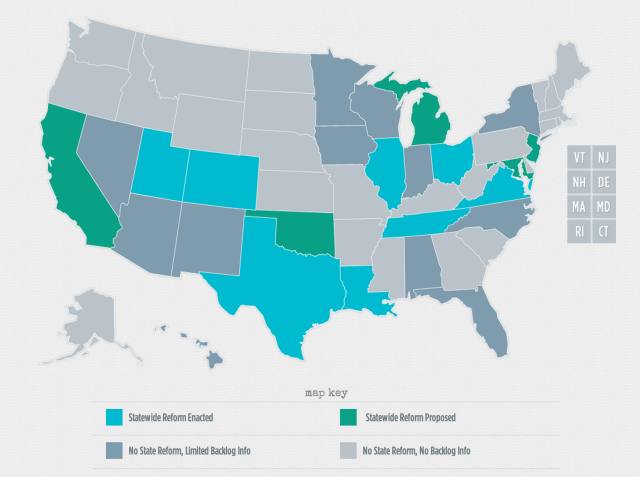 Still, untested kits are piling up in police precincts across the country, in part because much of the money granted by the Debbie Smith Act hasn’t actually gone toward testing.  Many kits sit in storage for decades, oftentimes without the victim ever knowing they haven’t been tested. That’s why the Obama administration asked for additional money this year, and why it is especially vital that Senate leaders resolve their disagreement and pass the bill with funding intact.

If the money is approved, it will go toward training and testing that could identify suspects in thousands of cases. The Washington Post reports that renewed testing efforts in Detroit has helped identify hundreds of perpetrators:

After testing the first 2,000 kits [of more than 11,000 found in 2009 in a lab that had been closed down], authorities identified 127 serial rapists and made 473 matches overall to known convicts or arrestees, or to unknown people whose genetic material was found at crime scenes.

The matches came from Michigan, 23 other states and the District of Columbia. Eight men have been convicted and sentenced to prison, 61 others have been charged and await trial, and 150 investigations remain open, according to prosecutors in Wayne County, Mich.

But the biggest motivator for approving this funding should be the victims of these attacks, who sometimes go decades without any progress after their initial experiences with police officers who are uninformed or unsympathetic to their trauma. A look at some of the survivor stories recorded by EndTheBacklog shows just how powerful receiving the results of a kit can be. Here is an excerpt from an essay by Helena, who was violently assaulted in 1996 and received no leads in her case until she and a rape victim advocate pressed the Los Angeles Police Department to process her kit in 2009:

Within one week a sergeant contacted me and informed me that my kit had been processed, and told me that they had a match. My rapist was serving a sentence of 25 years in Ohio.

I was elated. Here was my justice! But victory became defeat, when I learned that the sentence he was serving was for a nearly identical assault that could have been prevented if my rape kit had been processed. My rapist was imprisoned for sexual battery a year after my assault. But because the evidence had not been processed and there was no evidence to link him to my rape, he was released. Seven weeks later, he abducted and repeatedly raped another woman leaving a grocery store in Ohio, the crime he is currently serving for.

… I think of him sitting just a few miles away—the mysterious monster a real person, with a name —someone I’ll meet again soon. I want to feel relief. But I don’t know how yet. How do I come to terms with the lost years of my life, the lost parts of myself? I spent nearly half of my life waiting for this to matter. Now that it does, there are new challenges to face — ones that require much more strength than forgetting ever did.