Hansen and I created the Diarist’s Hike for A-Camp 2016 because, despite having done almost all A-Camps ever, neither one of us had taken a hike with our journals at Camp before last year. Camp is already a space for big, complicated thoughts and feelings: about how we do community, what we want from our world. It is already a place that could benefit from some moments of quiet reflection. But isn’t always space for that — people sometimes come with a “leave it all on the field” mentality. Sometimes I fill every part of a day with panels and workshops and crafts and board games and decide I’ll sleep when I’m dead. And yet, we are surrounded by mountains that look like ancient, sleeping giants, hairy with trees. The air smells only like air. If there is ever a moment to pause and reflect on what we’ve learned about the world and ourselves, it is in the early morning sun of Angelus Oaks. So the Diarist’s Hike was born.

I submit that a little of that philosophy is useful not only in the semi-magic extra-temporal pocket that is A-Camp, but in our every day life as well. The same connection between physical activity and writing that I feel on the mountain must exist at sea level, too. The act of taking a walk, of taking off the headphones and listening to my surroundings, should jog sentences out of my pen where ever I am. Even if the hike I am taking isn’t bookended with A-Campers or swaddled in majestic nature. It might feel semi-magic; it might feel extra-temporal. Making a little time to hike, no matter where you live, and write in your journal could have expansive effects on your life and the way you think. It could be bigger on the inside.

To test this hypothesis, that a Diarist’s Hike need not take place at A-Camp or even in beautiful nature, I took myself on one in New York City (the opposite of beautiful nature). I packed my picnic blanket, grabbed my friend Laura, and found myself sitting among the discarded candy wrappers and bottle caps in Washington Square Park. 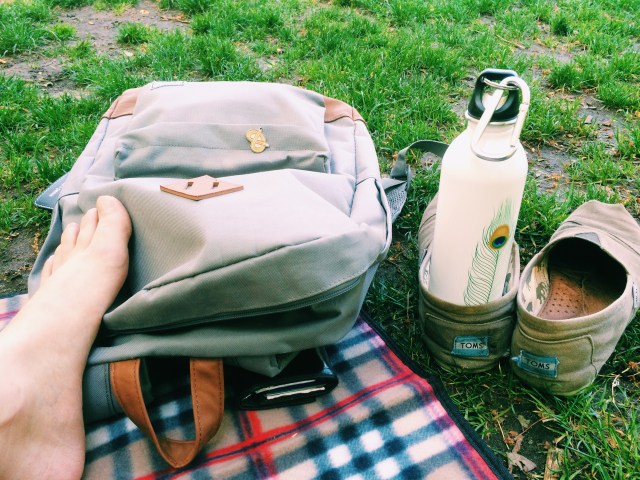 We talked for a while, and then settled into writing. But what came out of me wasn’t any deep, existential epiphany or whispers from my unconscious mind just waiting for me to listen, no. It was dialogue for my novel. For a second I worried that I was incapable of doing anything but work, of sitting down and actually checking with myself. I worry often that the performance of writing, the idea of writing for someone to read, has become so ingrained in me that I’m incapable of letting loose. But then I got into the swing of things and there wasn’t anymore worry after that, which I suppose is part of the point. The thing you have to know about me is that I used to be an actor, so when I write dialogue, I mouth every word and make really obvious facial expressions. As such, I suppose that Washington Square Park was an appropriate place for me to wind up — we sat not twenty feet from a man practicing with a wooden katana and talking to himself. I did not look out of place.

My New York City hike took me to lunch with Laura — Indian vegetarian lunch special the size of my face. A table of what I suspect were babely queer PhD candidates sat down next to us. I got super spicy food and destroyed my stomach lining, which was totally worth it. This is the advantage of the Diarist’s Hike in an urban center — it can include restaurants. If you want, though, you should make yourself some trail mix. It’ll add to the atmosphere. As good as the Indian food was, I wished I’d done that. Because atmosphere is what I thought my hike was lacking. I’m used to the Diarist’s Hike being a little bit magic, because A-Camp is a little bit magic. And New York City is, well, just where I live. It’s not magic at all. I was beginning to get discouraged. Perhaps moving my limbs would only bring about taking a walk, not a Diarist’s Hike.

When we walked ourselves back to the park, we sat across from one of the pigeon men — the men in Washington Square Park that feed and hold and talk to the flock of pigeons. Until my Diarist’s Hike, I did not know they existed. I was tickled. I cannot hide when I feel tickled. I was tickled because I watched a man call two pigeons out of the flock BY NAME. He reached his hands out, made kissing noises and called Gracie and Opal. And THEY CAME. I watched him do this again and again, and the same two birds came to visit. Then he said, “oh, that’s my sparrow!” and held his hand out to a comparatively tiny fluff ball, who took seeds from his hand. I listened to the pigeon men talk to each other — I witnessed the flock take off to greet a third man coming into the park. They caught me staring, writing details from the scene in my journal and murmuring “I love this, I love this,” to Laura over and over again. 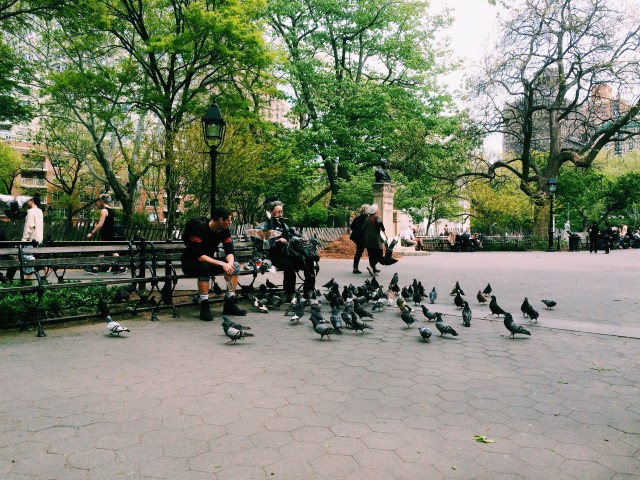 So one of them came up to me, by the name of William, and what follows is a long list of pigeon facts written in my journal. Did you know that every pigeon in the city is descended from people’s pets? That the pigeon is the second smartest bird, under the crow? That the white doves people release at weddings are actually pigeons? That genetic testing for biological sex in is only 55% accurate? (“I’m pretty sure Gracie is a boy, but that doesn’t matter,” he says with Gracie back on his shoulder.) Anyone who knows me in real life has heard me call New York City pigeons “rats with wings.” But that day changed how I see pigeons around the city. But more importantly, I changed some of my attitude about the city itself. It isn’t just a place where I live; it’s a place where magic lives. A few hours did some of the work of integrating the splendor of Camp into my life off the mountain, something that many of us forget. A-Camp is real — we get to take it with us.

It’s always a rough balance, isn’t it? Sitting down, writing, processing one’s internal life and also going out, moving around having an external life to process. Most people favor the latter. Most writers favor the former. But taking your journal with you you, i creates that balance. Your journal won’t run out of batteries. No one need see it. It’s another kind of tough balance, the kind between home/reality and hike/magic. But bringing that journal and taking that hike, it brings about that sort of balance too; bringing your extra-dimensional and extra-temporal book with you and setting aside a few hours, or even a few minutes, to be a diarist, flâneur (or shall we say flâneuse for most of us), will not just find you the magic you’ve been looking for. It won’t just make the world bigger on the outside, or the journal bigger on the inside. It’ll make you bigger on the inside too.

Only one question left: where will you hike?