I’m happy when I spend time outside. It’s the one thing I really need to do to feel good.

It’s taken me a full 30 years of my life to get to that realization, but I’m glad I’m here now. After 15 spent ambling through mirror-image suburban wastelands and at least six sandwiched into the urban thicket of lower Manhattan/various corners of Brooklyn, I moved to the Pacific Northwest and started figuring some things out. Right now, I’m figuring things out full-time. 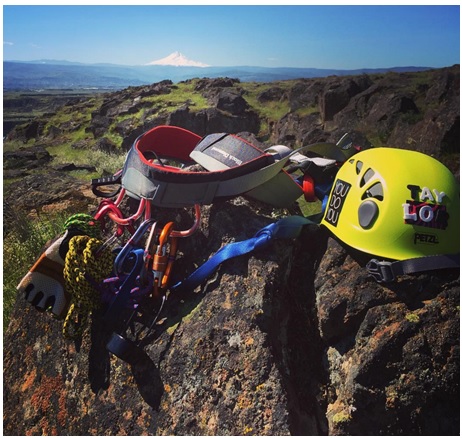 For the past year I’d been imagining what it would be like to climb the various crumbly, foreboding, impossibly beautiful volcanic mountains sprinkled throughout the Pacific Northwest. Unfortunately for my mountaineering career, that interest manifested exclusively through obsessive online research, which was more than enough to scare me off. As it turns out, people fall off mountains all the time! Pro tip: Don’t google it.

In recent months, my therapist, well acquainted with my tendency for obsessive over-research, started emphasizing the idea of “showing up” which is exactly as simple as it sounds. Nervous about something? Overthinking it? Just show up and see what happens. So I did.

After stepping away from the Google and into an often immobilizing state of psychological reckoning/imposter syndrome wrestling, I signed up for a mountaineering class put on by one of the oldest, largest alpine climbing and mountaineering organizations in the country. 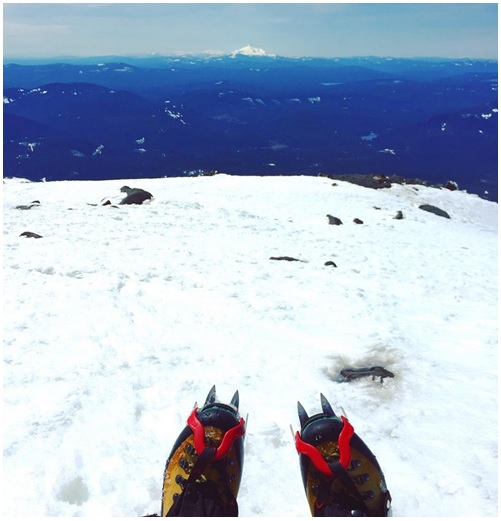 Crampons: Not what they sound like even a little bit

Some things I figured out in the course of getting ready for the class, mostly by hiking alone and experimenting: 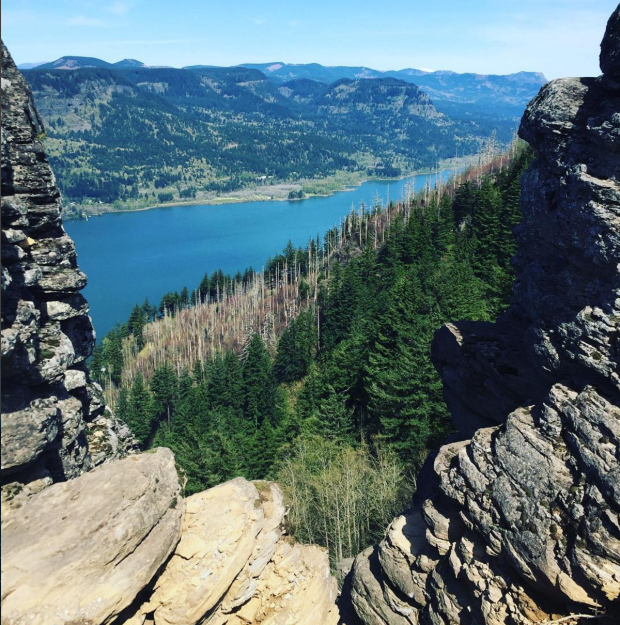 Taking this class seems pretty much in character for the people who know me now, which is sort of funny looking back. In Portland, my friends know me as outdoorsy, which can mean a lot of things but seems to reflect the fact that I go camping alone, obsessively over-research new places to explore, and likely seem sanest/happiest when outside (accurate!). It feels surprising then that in 2010, I was just a city queer new to the natural wonders of the West Coast (volcanoes! snow-covered ones!) with a vague interest in nature. In retrospect, I have no idea how I lived in New York City for six years without losing my mind, though I guess I did lose it eventually so I packed up a car and drove west with my partner at the time.

Prior to 2012 or so, my most immediate connection to nature was probably the god knows how many hours I spent looking at ground squirrels on Cute Overload or the nature club I founded in the fourth grade when I moved to suburban Houston from Atlanta and made enough friends to found a nature club; apparently you need three. The nature club casually disbanded after one outing to some kind of local conservation place where a regional ranger volunteer showed us a horny toad and a barn owl. I was captivated by the strangeness of natural things, the inability to parse intentions out of their sharp eyes.

In a few ways I’m an unlikely hiker, a term I borrowed from a couple of Very Smart Local Friends who write about hiking. In most ways, I’m not. I’m white, thin, able-bodied for the most part (my own chronic illness ≠ a static physical disability), and financially comfortable enough to take time away from work to figure my shit out, outside. 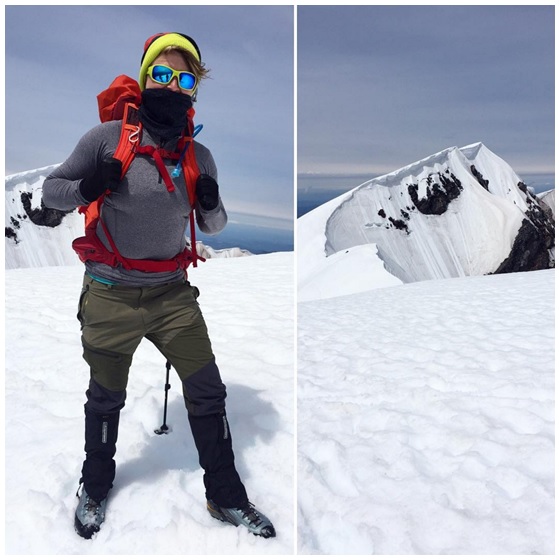 Knots and How to Tie Them

I didn’t grow up hiking or Girl Scouting or skiing or anything like that. None of the stuff that functional families seemed to do together. Here in the Northwest, it can feel like everyone hiked or downhill skied or extreme sport I’ve never even heard of out of the womb. I still have a tinge of jealousy about the functional, non-abusive family dynamics that must make things like ski trips possible, though I’m sure class and race are way bigger barriers to the Great Outdoors that continues to belong to some and not all of us.

Living in the Southeast, when I did end up in the woods, everything looked the same to me—humid, lush, and one shade of green in summer or leafless, brown, and still in winter. And when I went there, usually it was to get away from my family not to spend time with them. When I moved back to Texas, before I had friends, I’d spend whole days in the woods behind my house unfurling imaginary worlds that I wish I could conjure in my adulthood.

To his credit, my dad tried, sort of. When I went to college, my dad conveniently popped back into my life in a meaningful way and we forged a fragile, fraternal sort of friendship (the paternal one was rockier; we only saw one another a few times a year). When I was 19, he casually mentioned that we should go snowboarding “up in West Virginia” (that sounds funny now) which would have been a lot of intensive time together and a pretty big departure from our new relationship. It didn’t happen, but it did feel like he’d vetted me for friendship and I’d made it through the first round, for what that was worth. In the summers prior, we went car camping a few years in a row to the same place, a lush pocket of Appalachia with a lake that seemed to attract a thunderstorm as soon as you jumped in, but it was more of a new backdrop to string vodka tonics over than a particularly present outdoor experience.

Growing up as awkward a tomboy as they come, I wanted to know all of the stuff my dad seemed to have ambiently absorbed and taken for granted or even resented. Making a fire, knives, compasses—the stuff guys just knew about. As a blonde boy squarely in the middle class, the son of two good Southern Baptists who lived through the Dust Bowl and worried a lot about keeping their kids involved, the gates of father-to-son style knowledge transfer were flung wide open for him. I resented that he didn’t open those doors to me, while he resented me for being like the son he secretly wanted but still not quite right. When I was 10, in an apparent compromise, we went to the downtown Atlanta REI before a Braves game and he bought me a tiny, forest green swiss army knife which quickly became my favorite thing ever.

After my dad died, I slept in his childhood bedroom surrounded by light pine bookshelves full of worn copies of The Wolf Cub Scout Handbook and Knots and How to Tie Them. Now, those books, their 70s primary color palette covers fraying, rest in a long, low fir shelf below a window that opens into the rose garden behind my house. 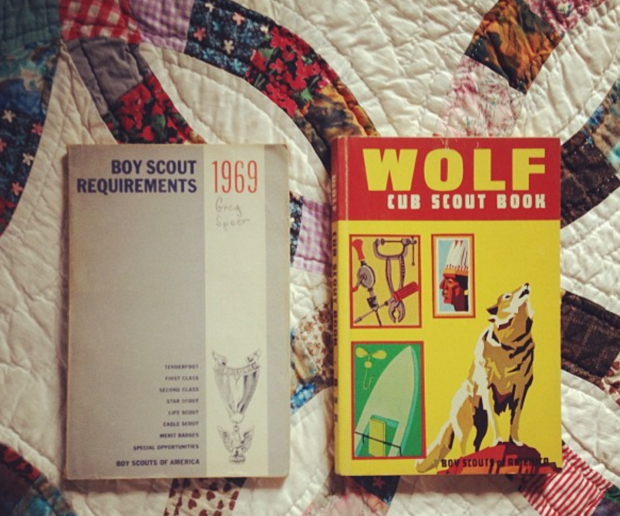 A couple of my dad’s old boy scout books

Before my first mountaineering class lecture began, the room roared with 200 men excitedly swapping summit stories with anyone who’d listen. When we split up into smaller groups, they showed off the knots they just knew with deft hands so quick I couldn’t follow.

The rest of us fumbled through, starting from the starting place.

Originally published on Out Lab. Republished WITH PERMISSION MOTHERF*CKERS.