Hello, I’m back with an all new Taco Tuesday! This is a column all about tacos, their history and origins, how they’re evolving everyday and my love for their tasty goodness.

When I was a junior in college, I studied abroad in Sevilla, the capital and largest city of Andalusia in southern Spain. I choose to study abroad in Sevilla for a variety of reasons: I understand and can speak Spanish (I’m better at Spanglish), I wanted to be in a specific magazine journalism program that was only offered in Sevilla, it was within my tuition budget, and also because Sevilla seemed like the most fascinating city in Spain with a rich history influenced by the Christians, Jews and Muslims who lived and worked alongside each other in medieval times.

I was mostly interested in Sevilla’s history under Muslim rule when it was part of Al-Andalus, which spanned the 8th to 15th centuries and yielded such huge, beautiful structures and architecture that you can find in the city today like the Alcázar (a royal palace that use to be a fort), the Giralda (originally built as a minaret) and the Torre del Oro (originally built as a military watchtower). Granted these structures and some of the architecture found within them were changed and/or copied by Christian kings later on (which is called mudéjar style art/architecture) but the Arabs’ influence is undeniably found throughout the city. 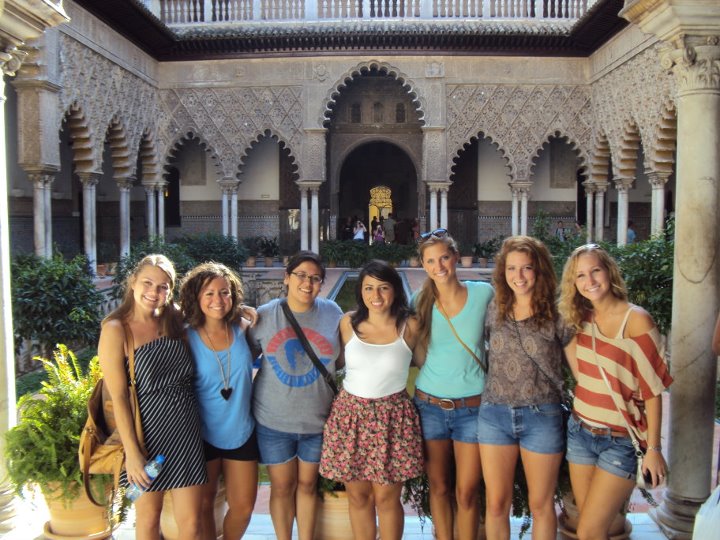 My study abroad cohort at the Alcázar. You can see examples of mudéjar style architecture in the background, which was influenced by the North African people who conquered the Iberian Peninsula.

I had a grand time frolicking through the city as a 20-year-old and thoroughly enjoyed Sevilla’s nightlife. I did what all American students do while studying abroad and I went out to the discotecas to party with my classmates ’til the wee hours of the morning and was well-acquainted with the popular bars in my neighborhood. The only problem with drinking and partying late into the night is that there weren’t any 24/7 fast food restaurants open in Sevilla to save my drunk ass. It’s fine, my friends and I survived because there was this tiny little place near my friends’ apartment that sold doner kebabs till 1 a.m. We would stop by before getting our night started or leave the club/bar early just to eat a delicious kebab before the shop closed.

Doner kebabs, which originate from Turkey, are ubiquitous in Spain and are usually sold as pita wraps filled with beef, lamb or chicken that’s been cooked on a vertical rotisserie and then dressed with tomato, lettuce and various types of sauces. At that point in my life, I had never eaten a doner kebab, shawarma, gyro or anything that resembled anything like them. I grew up in the Valley and wasn’t really exposed to cuisines from different cultures. So when I saw this seasoned stack of meat slowly turning on this vertical spit while a dude was shaving off the cooked meat, I automatically thought — wow, what are al pastor tacos doing here?!

Of course there weren’t any al pastor tacos in sight. I was confused and astonished because here I was half a world away and witnessing something so familiar and centric to taquerias found back home and Mexico. It wasn’t till a couple years ago that I found out how these two similar street eats from different cultures were connected. 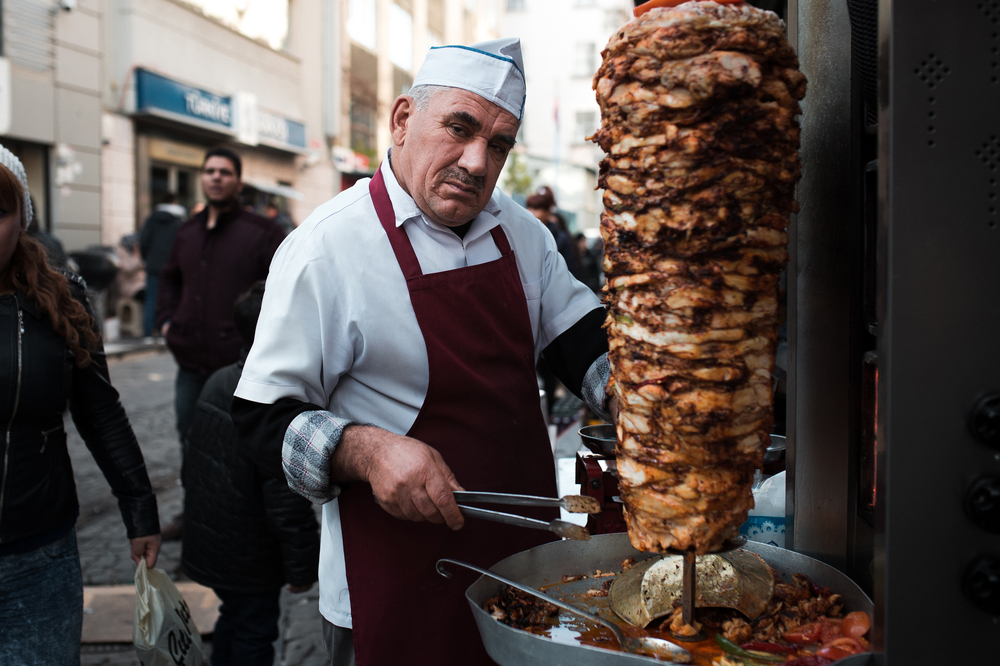 Tacos al pastor are made from strips of adobo-seasoned pork then stacked onto a long spit called a trompo, which means “spinning top” in Spanish, because the shape of the meat is similar — narrow at the bottom, wide at the top. And usually at the top of the spit is a pineapple, while the stack of meat sits on an onion. As the pork turns on the vertical rotisserie, fat and juices drip down the skewer as the outside layer of the pork becomes crisp from the heat. A taquero will then shave off the crispy outer layer straight onto tortillas and then top it off with some of the pineapple from the top of the spit along with onions, cilantro and a tangy green salsa.

Tacos al pastor are intrinsic to Mexico’s taco scene and what we think of when talking about street tacos. But it turns out tacos al pastor only date back to the 1960s in Mexico and actually have a direct connection to the Middle East, specifically from Lebanese immigrants who moved to Mexico in the early 1900s, and brought along with them their shawarma recipes. 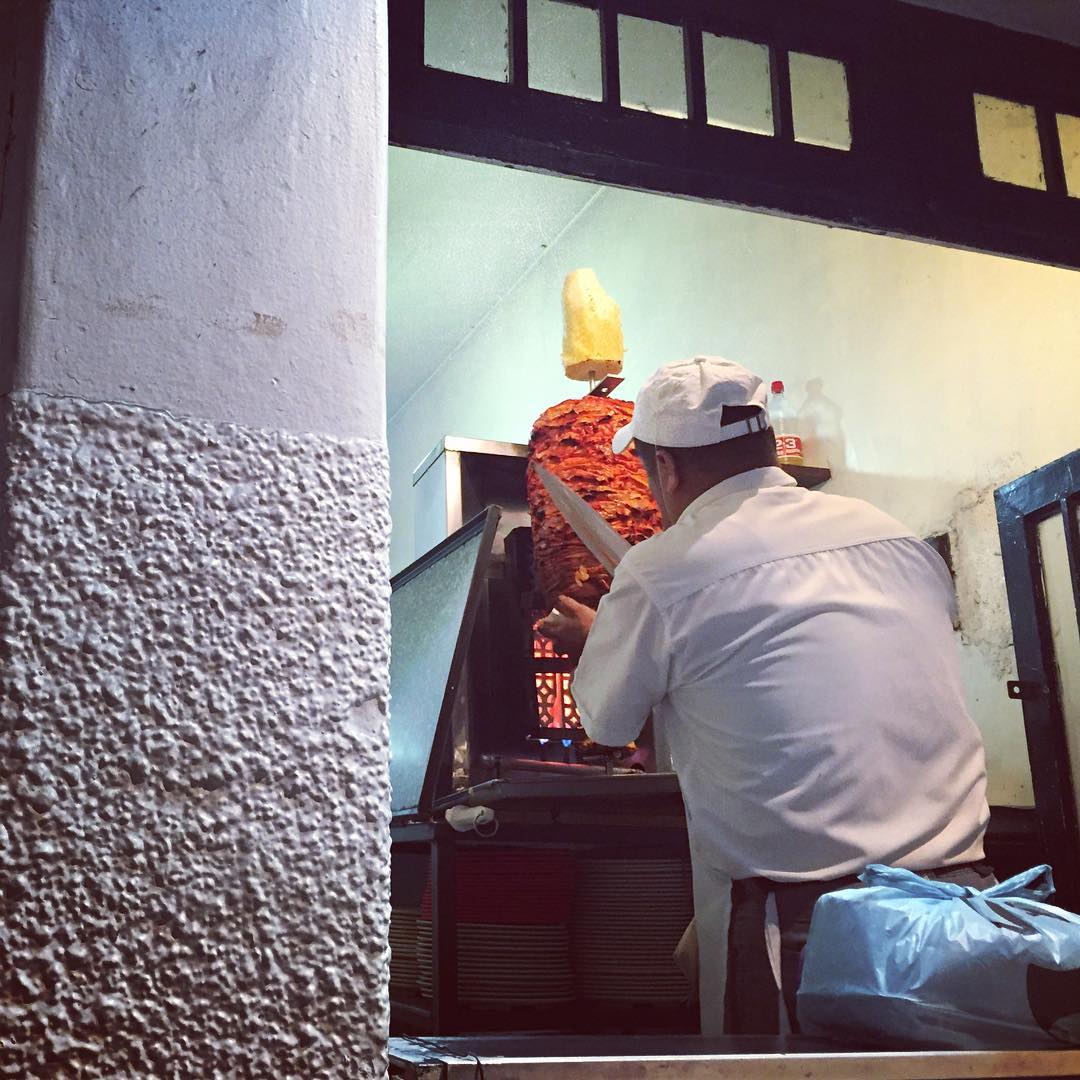 Tacos al pastor served window-side in Oaxaca, Mexico. I gobbled these tacos up.

Shawarma, like doner kebab, originates from the Ottoman Empire and is a pita filled with beef or lamb that was cooked on a vertical spit. The origin of the word shawarma comes from the Turkish word çevirme, which means “turning.” Between the 19th and 20th centuries, about 36,000 people under Ottoman rule, mostly from modern-day Lebanon, came to Mexico to look for economic opportunity, to avoid being enlisted in the army and to escape violence from their crumbling empire.

When they arrived in Mexico, they also brought their food, and by the 1930s Middle Eastern immigrants opened restaurants selling shawarma and calling them tacos árabe — Arab tacos. Tacos árabe were direct interpretations of shawarma — they used pan árabe, (pita) but instead of using beef or lamb to fill the pita, they used cumin-and-orgeno-marinated pork. Many of the migrants settled in Puebla, which is a couple of hours away from Mexico City, where you can still find tacos arabes today.

A few decades later, tacos árabes evolved into what we now know as tacos al pastor. In the 1960s, there was a culinary boom in Mexico City, where there was a lot of experimentation and trendy restaurants opening up. According to Jeffrey Pilcher, food historian and author of Planet Taco, during this time, Mexican-born children of Lebanese migrants started to open up their own restaurants and created “a kind of hybrid cuisine.” “They take the technology that they grew up with in these Lebanese restaurants, the vertical rotisserie — but instead of using lamb, they use pork,” Pilcher tells Public Radio International. “They marinate it in a red chili sauce, which gives it that distinctive color, and they cook these up and serve them and call them tacos al pastor.” The term “al pastor” which means “in the style of the shepherd” is a nod to the original dish made with lamb.

The only thing left to explain is how the pineapple came along in the picture, but that fact remains unknown. My theory is that pineapple is associated with Hawaii, where they traditionally roast entire pigs on spits, so Mexicans made that connection somehow and thought pork and pineapple would be tasty. However it came to be, I’m glad it did, because tacos al pastor wouldn’t be complete without the piña on top.

For me, it was far more interesting to learn tacos al pastor are still a fairly recent invention because it feels so ingrained in Mexican culture. It’s amazing how Middle Eastern immigrants introduced a totally new concept of food to another country which greatly impacted their menu and created a staple for years to come. The origins of tacos al pastor are a testament to how easily adaptable tacos can be and when they collide with another culture, it can be a recipe for flavorful perfection.