If your social circle is anything like mine, you have a funny friend. In fact, if your life is actually like mine, all of your friends are hilarious / clever / witty – but I digress.

Sylvia Traymore Morrison is funny. But she’s more than that. Sylvia Traymore Morrison is arguably the only famous African-American woman impressionist in the United States. She made history as the first black woman asked to be an Associate Writer for Saturday Night Live. She toured with the late Whitney Houston, the Four Tops, and the Temptations. And she recently self-published a book about her life called Almost There, Almost that I think you should read:

The book, written over a period of eighteen years, follows the ups and downs of Sylvia’s career and life. She discusses her struggle, but balances it with all these great, lively and enthusiastic stories about her totally fabulous life as an up-and-comer. She knew Jerry Seinfeld back when he was just standing up. And she even dedicates two chapters to Whitney Houston:

Near the end of Whitney’s set, she sent security to look for me and motioned me to come on stage with her. I did not know what to expect. Had I done something wrong? Did she want me to see something? Was I in trouble? Did she want to make a special announcement? None of the above. What she did was, grabbed my hand, held it high in the air with hers, and I believe you could hear the roar of the audience for miles. While the audience was going nuts, Whitney looked at me and smiled. I knew she was pleased. We left the stage and before security could take either of us away from the stage, we gave each other a big hug. Whitney was the absolute biggest thing in the industry at that time, and she was delighted with having me on her tour. I went back to my dressing room, broke down and cried. Whitney Houston selflessly shared her stage with me. No one told her to do that.

Sylvia opens up about her own tribulations: bouts with domestic violence, a brush with HIV/AIDS during the peak of the crisis, and growing up 12 blocks from the White House (which is not glamorous, not one bit) in a way that is moving, involving, and honest. Her strength, courage, and ability to continue to laugh makes all of those stories even more poignant:

Tweety Bird, Regina’s little 3 year old daughter was outside playing by herself in the courtyard. There we were, in a huge apartment complex with no one outside in the courtyard but a 3 year old baby. I found that mighty strange considering it was around 8 in the morning. I stopped, spoke and asked where her mother was. She said her mother was “upstairs on the floor dead.” I looked at her concerned because that was a really strange answer coming from a 3 year old.

You’re going to want to read this book. 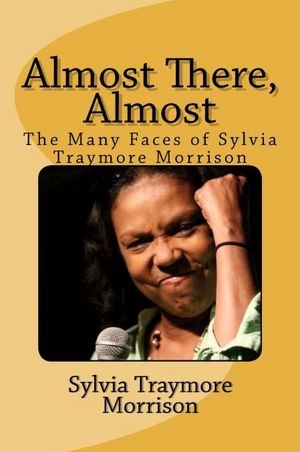 Ty Gray-EL writes in the Foreward:

It is my humbled opinion that Sylvia Traymore Morrison should be lauded as a national treasure and that her story become required reading for anyone who is in need of motivation. This story outlines some of the most outlandish, extraordinary and yet, triumphant experiences anyone could imagine. They serve as inspiration to us all. You simply cannot read Almost There, Almost without being inspired.

Almost There, Almost is an easy read for the most part. The tone is casual and relaxed – just like Sylvia’s demeanor in person. (Meeting Sylvia was possibly the most fun I’ve had all year.) This book promises you two things: it was written by a funny person and it was written by a great person. You can’t go wrong.

Plus, all orders for softcover copies of the book will now get you the first manuscript edition, with no edits and with all the original content. The book may go through revisions before its second publishing, so what you’ll get now is the original version of the story.

If you’re anything like me, you’ve probably looked around at your life once or twice and gone, “Hmm, where am I going? Who am I? What’s going on? Where are my keys? I lost my phone.” Sylvia’s right there with you, still. We’re all almost there. She’s just honest about it.

You can buy Almost There, Almost online on Amazon.  You can also buy it for Kindle.