In a highly anticipated decision, today the Supreme Court ruled that a key portion of the Affordable Care Act (“Obamacare”), which requires citizens to carry health insurance or else pay a penalty, is in fact constitutional. A 5-4 vote, in which the usually fairly conservative Chief Justice Roberts joined his more liberal colleagues in upholding the ACA, says that it’s legal for the government to mandate that citizens must get health insurance by 2014 or else pay a tax. The court essentially ruled that the penalty in question doesn’t function differently than other taxes on US citizens, and is therefore constitutional. As Roberts wrote in his decision, “because the Constitution permits such a tax, it is not our role to forbid it, or to pass upon its wisdom or fairness.” Justices Scalia, Thomas, Alito and Kennedy were dissenting, and said they would have struck down the entire law.

The court didn’t find the entire law constitutional, and struck down part of the law dealing with Medicaid. The court ruled that an expansion of Medicaid can’t be made mandatory for states because it threatened states’ funding, and that the federal government can’t put sanctions on states’ current Medicaid funding if they choose not to participate in the expansion. And while Roberts did surprise and disappoint conservative supporters by siding with the more liberal half of the court, he didn’t necessarily throw in his lot with them philosophically. He still agrees with the conservative viewpoint that the federal government can’t force people to carry health insurance, but his argument is that the government isn’t forcing anyone to do anything, and is instead just choosing to tax those who don’t. 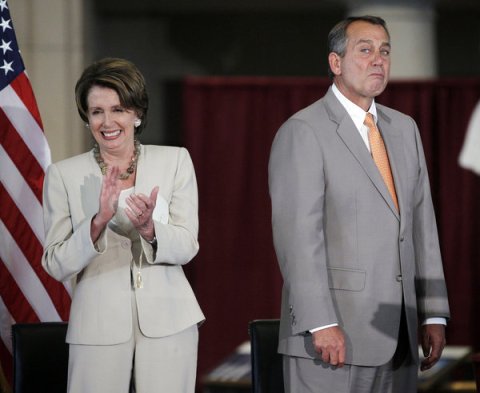 As is to be expected, Democrats are in general very pleased about this decision, and Republicans less so.  Mitt Romney declared that “What the court did not do I will do on my first day as president… ObamaCare was bad policy yesterday. It’s bad policy today.” How Mitt Romney will manage to reverse a Supreme Court decision on his first or any day as President is unclear, but the sentiment stands. The GOP is expected to “try to dismantle the law “piece by piece” in the words of Rep. Lynn Woolsey. But in the meantime, it could mean a huge difference in the lives of those with chronic illness.

The expansion of Medicaid means that some people who didn’t previously qualify may now benefit from it, and tax subsidies can provide a big help to those who are now uninsured, thereby making insurance much more affordable. The Congressional Budget Office estimates that 17 million more Americans will now be eligible for Medicaid by 2016, and an estimated 20 million will be able to afford their own through exchanges. Insurers are guaranteed to provide coverage to people with preexisting conditions. People who don’t have access to an employer-provided health plan can shop for insurance at state “exchanges.” If someone’s insurance premiums would equal 8% of their income or more even after subsidies and employer contributions, they are exempt from buying insurance but also exempt from the tax penalty for not buying it.

One question that remains is what will happen to insurance rates if it becomes a product that everyone is required to buy — ordinarily, supply and demand would dictate that prices would rise. A ballot initiative that would allow the state to regulate insurance prices (and thus keep them from becoming unaffordable) is being pushed for November, but is facing protests from insurance companies like Blue Cross Blue Shield. And even if insurance rates aren’t able to be regulated, there will still be Americans who can’t afford insurance — those who don’t meet the 8%-of-income mark but also don’t qualify even for extended Medicaid coverage.  But there will also be Americans who may be able to access care that they would never have been able to afford, and diagnoses that may have previously been death sentences because their victims weren’t in the top income bracket of the United States may now be treatable. There’s no way to know whether the Affordable Care Act will remain in its current state, especially if we find ourselves with a Republican president in November. But it will certainly be added to the list of accomplishments of the Obama administration during his first term, and for many it will be remembered as a major step forward.