Pixar’s animated Scottish-princess-mother-daughter-magical-adventure flick Brave opened at number one in the box office this weekend, taking in $66.7 million and giving everyone a lot of feelings about the company’s first woman-fronted movie.

When the trailer originally premiered, I had more than a handful of reservations, most of which centered on my fear of straw feminism. I went into Brave with low expectations, but after watching it again and again and again, I feel like I can safely say that I am very impressed with how it turned out. A good mother-daughter story with some kick-ass animation and a solid if not somewhat dark screenplay to boot? Yes, please! Really, my only beef was that there weren’t more women characters overall, but even that seems intentional. You guys, it’s just a really great movie, and I strongly recommend seeing it.

But where there is light, there must also be dark. Entertainment Weekly ran a story with the attention-seeking headline “Could the heroine of Pixar’s ‘Brave’ be gay?” While asking this question only proves that someone missed the point of the film, Princess Merida’s complete lack of romantic interest was bound to raise a few eyebrows. From the EW article:

But could Merida be gay? Absolutely. She bristles at the traditional gender roles that she’s expected to play: the demure daughter, the obedient fiancée. Her love of unprincess-like hobbies, including archery and rock-climbing, is sure to strike a chord with gay viewers who felt similarly “not like the other kids” growing up. And she hates the prospect of marriage — at least, to any of the three oafish clansmen that compete for her hand — enough to run away from home and put her own mother’s life at risk. She’s certainly not a swooning, boy-crazy Disney princess like The Little Mermaid’s Ariel or Snow White. In fact, Merida may be the first in that group to be completely romantically disinclined (even cross-dressing Mulan had a soft spot for Li Shang).

Of course, EW isn’t alone in their feelings, not by a long shot. Roger Ebert even called Merida “a sort of honorary boy” in his review, which is infuriating and lacks any sort of real perception of how gender and gender roles work. 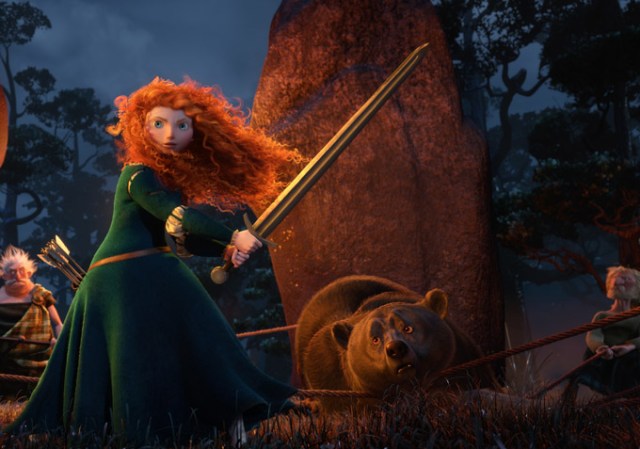 Probably not thinking about banging chicks at this particular moment

Here’s the thing: It’s ok to think that Merida is a lesbian, not because she shirks traditional gender roles but because she doesn’t have a love interest. Archery prowess and a love of the wilderness does not a lesbian make, otherwise The Hunger Games might have been a little different. She’s not “an honorary boy” because she’s not actively trying to find a husband. On the contrary, it is unlikely that this story could have happened to a guy in this setting, and this conversation about sexuality definitely wouldn’t have happened. Also, stop conflating gender identity with gender presentation! Commentary like these reviews is frustrating, but maybe that’s the point Pixar is trying to make: Merida’s sexuality is a non-issue in the film, and the fact that this topic is even worth mentioning is because women are constantly sexualized.

That being said, it’s not a stretch at all to imagine Merida as a queer person. That’s part of Brave‘s genius, really. Merida is a princess, but she’s also the hero, and because she’s not openly into dudes, it leaves her open for people of any sexual orientation to project themselves onto her without feeling weird. Besides, the story isn’t about romantic love. It’s about the conflict between Merida’s duty to her family and her duty to herself with a focus on her relationship with her mom.

Everything about Brave is beautiful: It has swoon-worthy accents and strong female characters and Mumford & Sons and slap-stick and goofy brothers and what’s probably Pixar’s most gorgeous animation to date. It seems silly that people are willing to write-off everything positive about it because it’s a story about a princess. Comparisons to Disney princess movies are fair, but only insofar as to mention that this fairy tale is a departure from the glossy, Prince Charming-centric stories audiences have come to expect. Brave allows Merida to be an angsty teenager first and a princess second.

This is the kind of movie that needs to be made more often. It’s like Tangled on feminist steroids. I feel like part of the reason why I like this movie so much is because it’s the first time I’ve really been able to identify with a princess because, to borrow a phrase, “I don’t want to get married. I want to stay single and let my hair flow through the wind as I ride through the glen firing arrows into the sunset.” (Literally, that is what I want with my life, except I also want the Brave soundtrack on repeat while it’s happening.) To send young girls the message that there really is more to life than stumbling onto true love is not in any way a bad thing, and to discuss this in a movie that both uses and circumvents traditional princess fables is brilliant.

I’m going to see this movie again, is what I’m saying.