Kelly does what I do when paid a direct compliment and pivots the conversation back to Supergirl’s problems. She tells Kara that the PSA went viral because Brainy made it personal. And Kara realizes Kelly is right, they need to tell a story, but it’s not her story to tell. So she’s going to use her platform to amplify voices. Which probably didn’t need to be said in so many words but I try to remember sometimes that teenagers watch this show too, so hopefully they learned something. 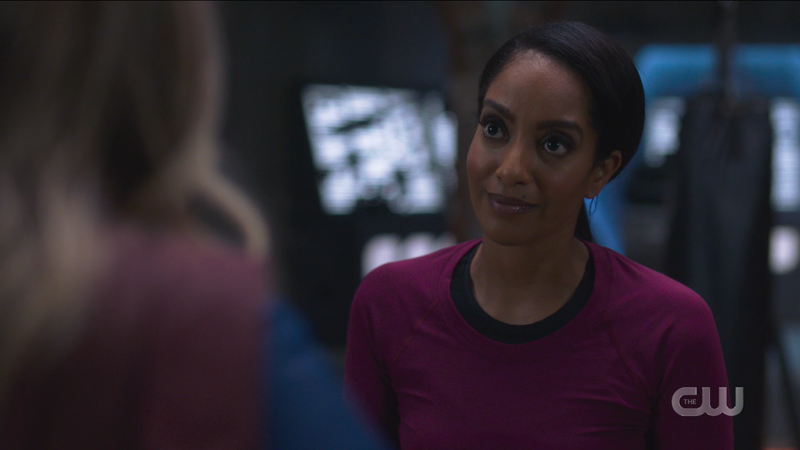 “Can I go back to punching things now that you’ve caught up?”

Back in Nia’s apartment, her mom makes them hot chocolate and she’s still being kind of rude to Nia, if I’m being honest. “You’ve gained answers, but at what price,” she asks. She tells a fable about how mistakes can’t always be undone, and how Nia can’t fix this, she just has to sit in the discomfort of realizing she fucked up. Which is all well and good, and solid advice in general, but if I’m being honest, I think having Nia at full strength will eventually be a net positive, despite the angry imp on the loose.

Mom starts to fade, and Nia is so, so sad. 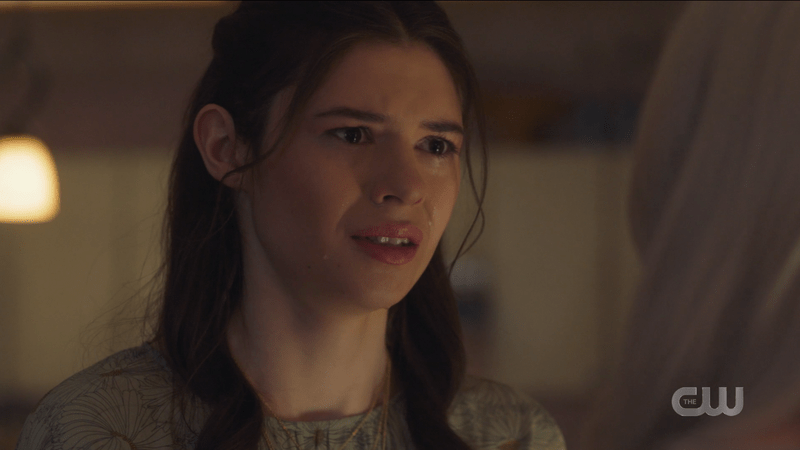 EVERY TEAR ON HER CHEEK IS A DAGGER IN ME

But Mom knows Nia is ready. She tells her to trust her dreams and own her mistakes, and just like that she’s gone.

Supergirl and Kelly go to the council meeting and Supergirl says that they’ve heard the stats and seen the numbers, but now it’s time to hear from the people who would be displaced by this deal going through.

She calls up Orlando, who tells them his story. About how this is the best way to set Joey up for success, that he made some mistakes but that shouldn’t ruin the rest of his life. Of Joey’s life. He’s just asking them to see them, to help him give Joey some hope. It’s emotional and moving and honestly this is the second episode in a row that Jhaleil Swaby has really knocked it out of the park.

Nyxly is watching this from the glam rock spaceship and chooses now to deactivate the cloak, luring Alex, Brainy, and J’onn onto the ship. Nyxly poses as a prisoner and J’onn lets her out, and the team finds an ice bomb that can trap even a Kryptonian.

The Superfriends get to work escorting everyone out of the building while J’onn and Kara go down to try to stop the bomb from spreading more ice. They realize they have to run up instead of down because the origin of the ice is in the basement, and things are pretty chaotic. Alex tries to use her gauntlet to melt some of it down but there’s just too much and it’s spreading too quickly. In the chaos, the councilwoman almost gets pelted by a barrage of glass, but Kelly swoops in and improvises a shield to protect her. 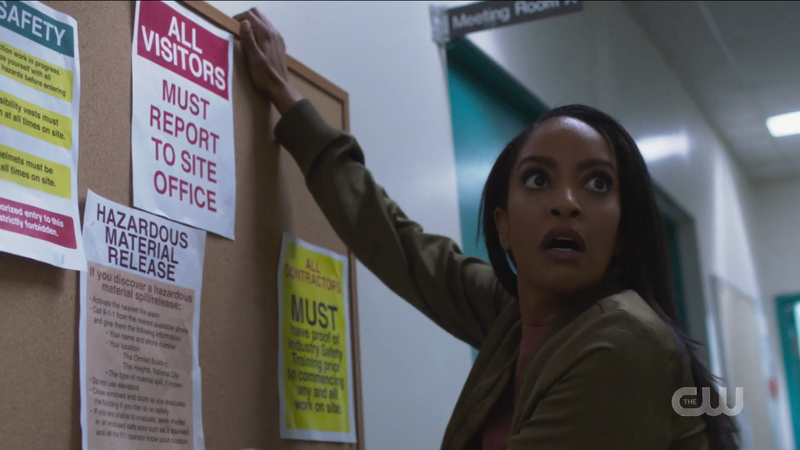 We need to get this girl a retractable shield.

The Superfriends manage to get everyone out to the feelings balcony required by the National City Building Association and Brainy calls the Legion ship to get them out of there.

Down in the basement, Supergirl uses her heat vision to explode the bomb and it seems like they’re in the clear. 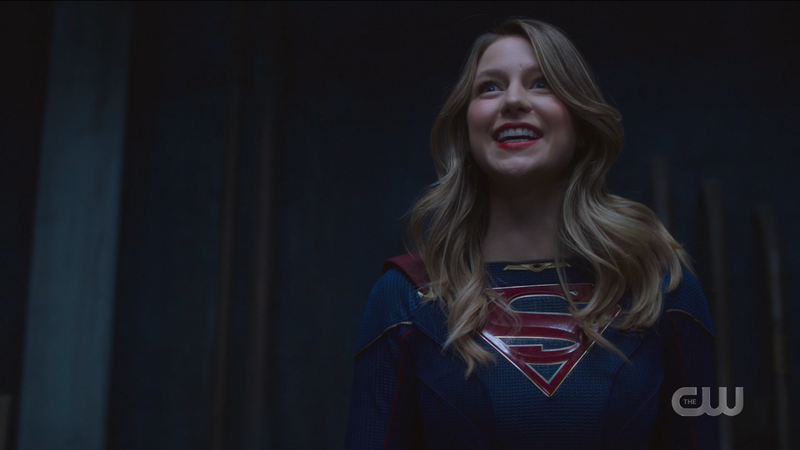 This is the face of a girl who desperately needed one (1) thing to go right today.

For some reason the council decided to do the vote whale waiting for emergency services to arrive, so they tell Supergirl that they’re going to rezone the building for affordable housing instead of selling it to Big Tech. Supergirl congratulates Orlando. She also tries to thank the councilwoman but she makes it clear that she didn’t actually change her mind, just the rest of the council’s. She still thinks the neighborhood is going to hell in a handbasket without this change.

Alex scoffs at her but Kelly says that the councilwoman did do one thing for her today, albeit unwittingly. Saving her from the glass, acting on impulse, improvising in the moment, it felt right to her. She realizes that being a hero is being able to adapt in the moment and do the next right thing, and if there’s one thing she’s good at, it’s adapting. 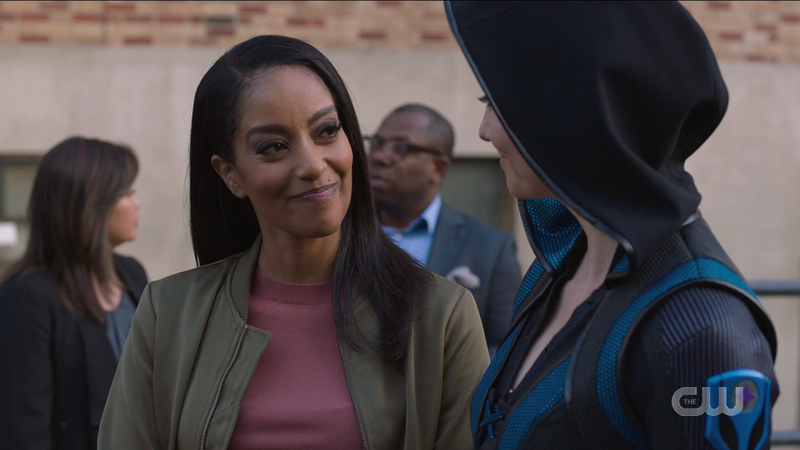 If I were running the National City gossip column I would accuse Kelly Olsen of cheating on her girlfriend with Sentinel after this blatant public flirting.

So now she knows what the rest of us already knew: she’s going to be a kickass Guardian.

Nia finally gets a handle on her dream and cracks the ice cage, and I have a feeling this one is going to be too little too late.

Back at the Tower, Brainy finds Kara on the feelings balcony, and says he understands now what she meant when she said she wanted to use her voice as Supergirl for bigger things than leafy greens. But Kara is pretty bummed. This victory still feels so small. She helped one neighborhood, but she can’t help but think of all the neighborhoods that she didn’t help. Brainy gives her important advice: when fighting against systematic change, the fight is long, and will feel neverending. They can’t expect to solve it overnight, all they can do is keep showing up. And he can’t promise her they’ll always be able to help, but he can promise her that he’ll keep showing up too, right by her side, every time. 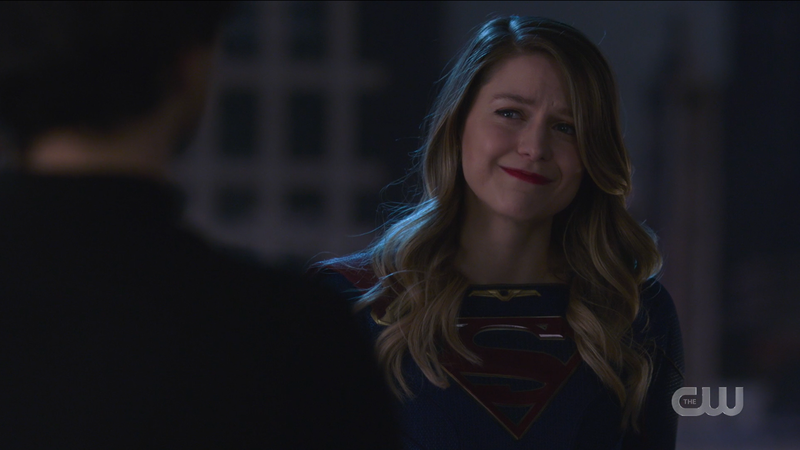 And I think this was an important message. I think sometimes hero shows like this try to solve real world problems, like how Zor-El tried to solve global warming. But this show is having even the superheroes have to take it one fight at a time. Granted, this Special Issue of the Week stuff does feel a little more like Season 1 Supergirl and I do wonder if they should be doing more character stuff than taking on such complicated issues with only the ability to cover it in broad strokes, being the show it is, but I again think of the teenagers who are constantly awash in headlines of terrible things and needed to hear that even the small wins matter.

J’onn calls them back in, saying he senses some extra energy from the bomb site, so Supergirl goes back to check it out. But it turns out that was all part of Nyxly’s plan. The bomb had absorbed some of Supergirl’s powers and gave them back to Nyxly, and also it didn’t stop the ice, which Nyxly now uses to encase Supergirl. 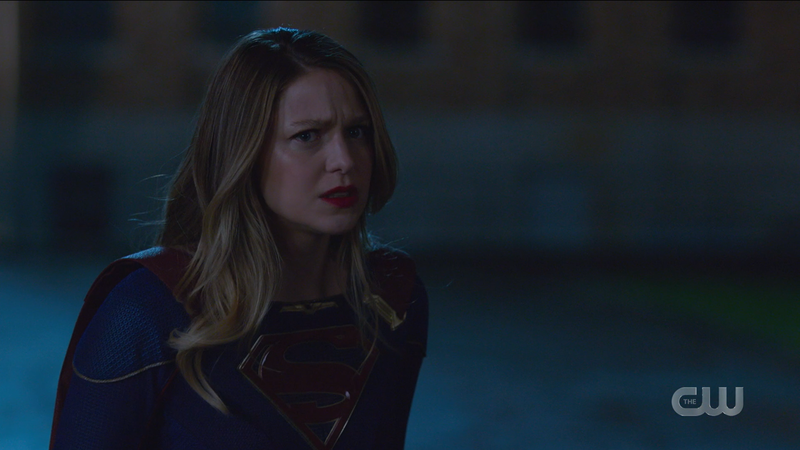 “That was heckin’ rude.”

For some reason, the ice around her legs makes her lose ALL of her powers, and she can’t even call for help. I am delighted that Kara called Sentinel first and Martian Manhunter second and Nyxly is delighted that she’s able to stop the comms. And I also personally appreciate that the more evil Nyxly gets the hotter she looks. 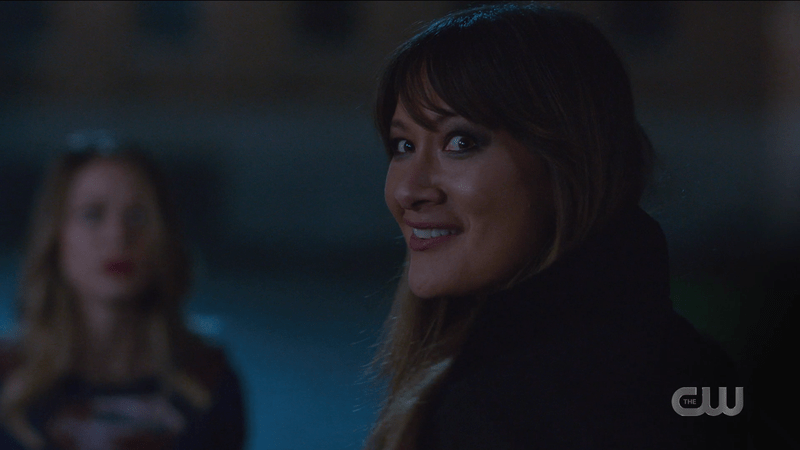 Nyxly says she wants Supergirl to feel as alone and powerless as she did in the Phantom Zone. She also wants to kill her father but that is neither here nor there, apparently. Nyxly wants Kara to feel the betrayal she felt when she was left in the Phantom Zone for the second time, she wants to watch Kara’s hope crumble. 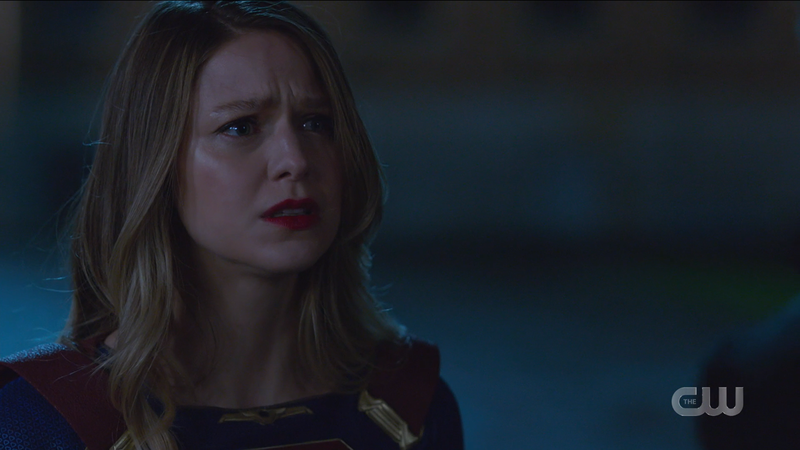 Ma’am? Some of us are relying on Kara’s hope to keep our own alive? If you could not kick our puppy, that’d be swell.

Nyxly destroys the building Kara just fought to save, and toodleoos, saying good luck getting out of the magic ice, because only magic can beat magic. And Kara knows that she needs more than the magic of friendship for this one, so she shouts out to Mr. Mxyzptlk, and he appears in a flash.

I can’t set up a proper teaser for next week because there was no promo yet again (why?! And no the cheesy ‘Tuesdays are for girl power’ combo teaser with Star Girl doesn’t count) but according to the short description, (of which I’ve seen two versions: one that says Ireland, one that says Newfoundland) it seems like two things are going to happen that will make me squeal in delight: seeing Lena again, and SINGING.