Hello and welcome to this recap of Supergirl Season 6 Episode 10, Still I Rise aka the One Where We Learned What Dreamer Dreamed.

And we begin just after that deal was set into motion, with Nia using her powers to bring Nyxly into the real world. It’s not long before Nyxly starts to show her true colors and Nia has some regrets about this deal, especially when she finds out that the 24 hours she’ll spend with her mother will be in a magic trap where she can’t communicate with anyone to warn them. She needs a head start.

But, to her credit, Nyxly does the one thing that she promised that Nia was most worried about, and in the blink of an eye, Nia’s mom is standing before her. And because sometimes moms just gotta mom, they are barely out of their hug before Isabel tells her daughter she’s disappointed in her. 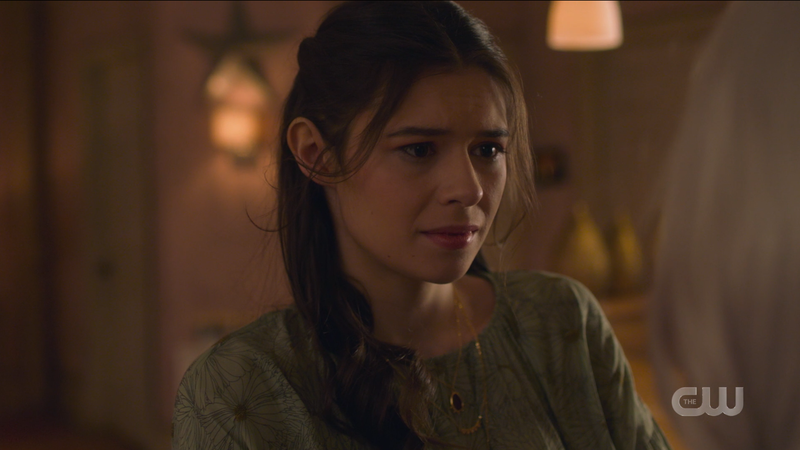 “Well how was I supposed to know that magic has a price!”

Nia says she needed her mom to train her, that she left before they could work together, and her mom is like, “Haaaave you considered that me and my dream powers were trying to teach you about dreams while I was visiting you in your dreams.” The owl was indeed her mother, and Nia brushed it away. Nia knew that if making this deal had any consequences, she could solve it with her mom (I mean they got Kara out of a fractured Phantom Zone for Rao’s sake!)…though now that they’re trapped that might prove a little more difficult. Mom doesn’t mince words, saying that Nia unleashed something terrible. But since they’re stuck here, they might as well make good use of their time, so they get to work.

Back at the tower, Kara and Brainy are watching the PSA they made in which a very enthusiastic Brainiac 5 and a very awkward Supergirl tell kids to eat their vegetables. 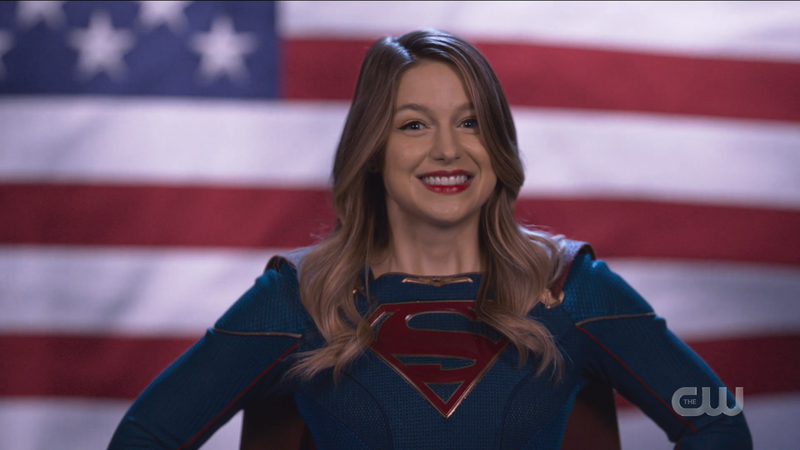 Me trying to pretend things are “back to normal” knowing full well it’s not.

Kara is so embarrassed and wants to kill the whole project; if she’s going to do a PSA she wants it to be about mental health or something bigger. But Brainy says not only is it too late to keep it from being published, but it’s too late to take it down, since it already has 800k views. Kara is feeling a bit panicky about this news so she decides to distract herself by following the sounds of grunting. Which…feels like a dangerous choice when you work with your sister and her girlfriend, but power to ya.

And while Alex and Kelly are indeed getting physical, it’s because Alex is training Kelly to fight. 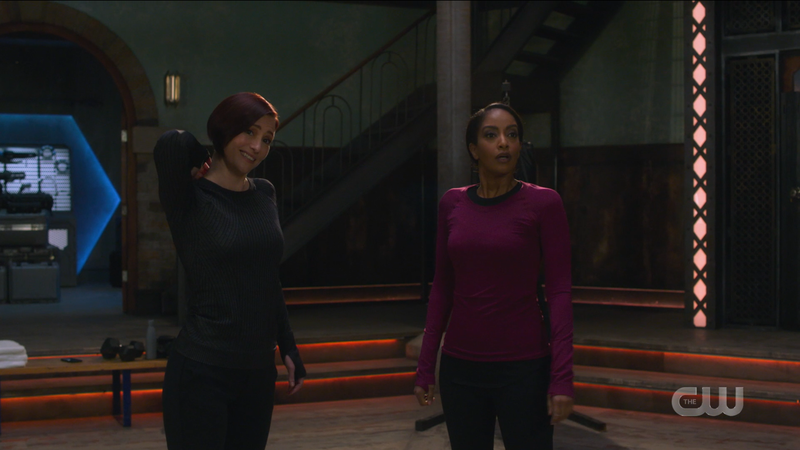 POV: You just walked in on your sister getting sweaty with her girlfriend.

Kelly takes Alex down and Alex says she did a good job but Kelly doesn’t crack a smile; she didn’t do the move exactly how Alex taught her, so the perfectionist in her wants to try again, to get it right.

Kara beams, all proud. She remembers when Alex trained her. She looks like she’s considering joining them but Kelly gets a message from the foster home that Orlando’s apartment fell through so he and Joey won’t be together next month like they planned, so Kelly wants to go be there for Joey like she promised. Kara made the same promise to Orlando, so she goes to find him, too.

Orlando is surprised to see Supergirl catch his stray basketball, and before telling him about the Earth-25 version of herself that is the captain of a basketball team called the Lakehawks, she asks what happened to his apartment plans. 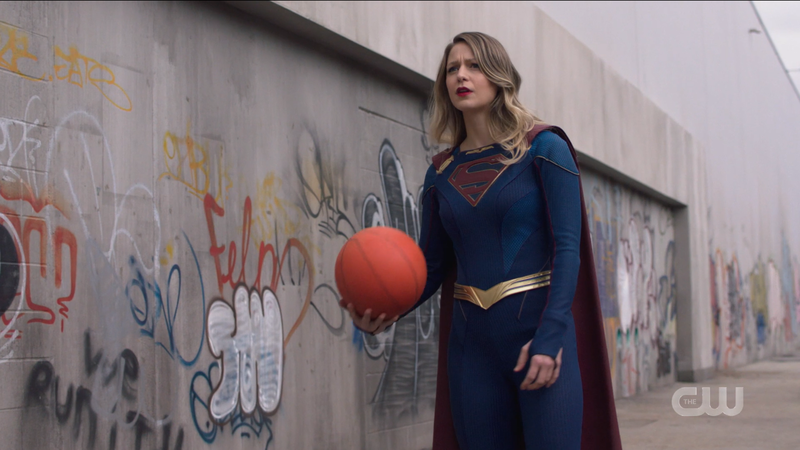 “It’s a tad mesmerizing for Lena to watch, though she doesn’t want to admit it…The ball seems to be an extension of her body.”

He explains how he got approved for an affordable housing building that specifically has some units designated for the formerly incarcerated to help reduce recidivism, but that the building is being sold to a tech company. He’s feeling despondent, like he’s stuck in a vicious circle, because he can’t get an apartment without a job, but he can’t get a job without an address, and he can’t take Joey home without both. Supergirl promises she has his back but he doesn’t look like he believes her.

Up on a spaceship, one of the Glam Rock aliens from the Midvale episodes, looking much less Glam these days, tracks Nyxly and captures her in his cage, planning to put her in his menagerie. She uses her wiley ways to convince him that since she has no powers, she wouldn’t be a good act for his show, so he hangs his head and lets her go. 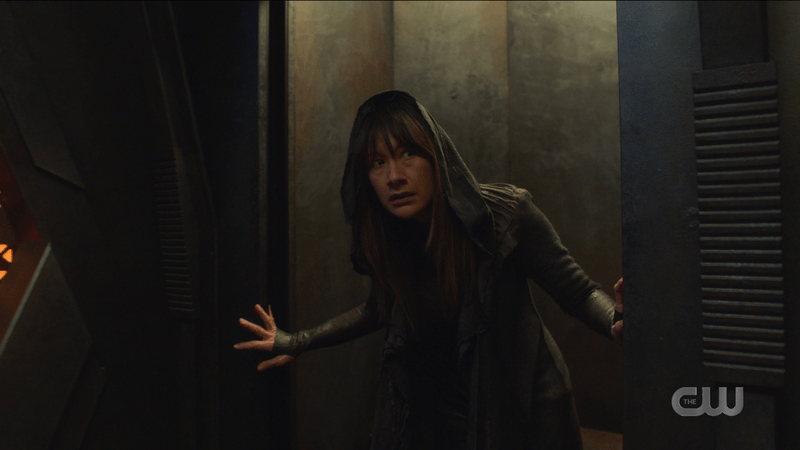 But on her way out she sees a bunch of news articles taped up with Supergirl’s picture crossed out and she realizes their interests might be aligned, and offers to help him catch her. All she needs is an engineer to set up her trap, and he’s happy to kidnap one for her.

Kara shows up to work at CatCo already on the phone and balancing a stack of papers. She really wants to get this information about the low-income housing being bought off, and wants to “work with” Supergirl to convince the City Council not to do this. Andrea appears as silent as a shadow and says that a bunch of articles about stats aren’t going to help, not even if Supergirl rattles them off. Andrea thinks Supergirl should do a social media takeover, leverage the platforms people are already using. 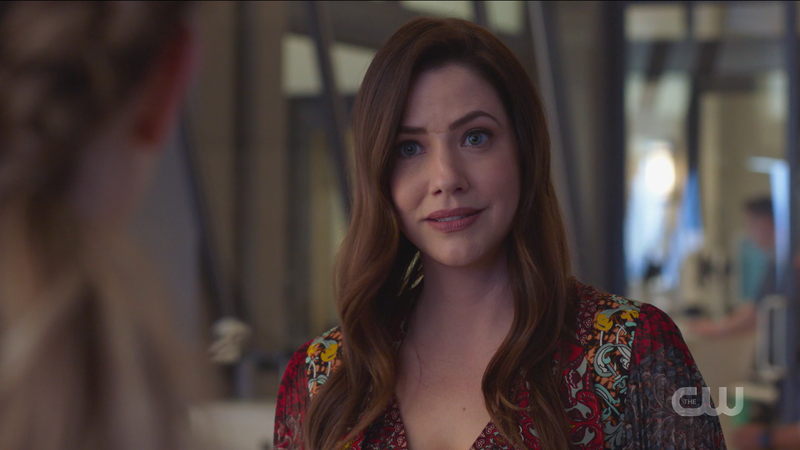 “The right hashtag can save just about any show. Even that one God-obsessed show starring Prince Charming.”

Also this isn’t really a suggestion. It’s happening. Much to Kara’s dismay.

Nia and her mom are practicing dreaming, and Nia ends up in her dream forest, but on purpose this time. And she’s pretty proud of herself. She sees an ice cage and tries to figure out what it means, but before she does, she gets attacked by ravens again. She wants to snap out of the dream but her mom won’t let her: she can’t run away from these feelings, she has to face them. Nia starts listing the symbolism of ravens according to her dream books, but mom tells her to combine that knowledge with what ravens mean to HER.

Nia sees her old dollhouse with a stained glass raven in the attic window, and is transported into it, where she sees a little version of her sister Maeve. 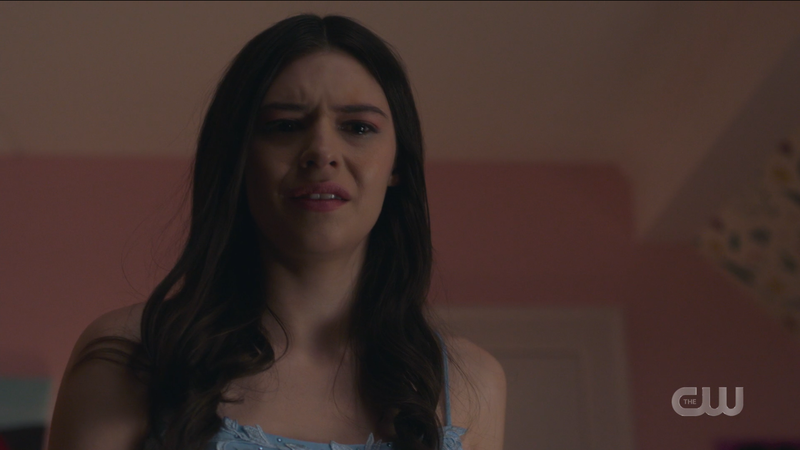 As someone who often has hyper-vivid and/or lucid dreams, returning to an old one can indeed be trippy.

Elsewhere in National City, the circus jerk beams down to steal an alien engineer. His cry for help interrupts Supergirl’s very strained live feed where people are calling her a hypocrite and she is probably grateful to have a good excuse to leave in the middle of it. The glam rock alien disappears before Kara can stop him, and when she gets back to the Tower she says that she searched the whole city and can’t find him, but she knows he looks familiar.

Somehow they have identified him though; does Supergirl wear a bodycam? Anyway, the kidnapper is Mitch, and he kidnapped a builder alien, so they know he’s starting up his menagerie again.

Since it seems like the team has this handled, Kara wants to go have Supergirl talk to the city council woman to try to convince her not to make this building deal. Alex looks supportive, but concerned. She knows Kara has to figure out that she can’t solve systematic racism/classism/capitalism in a day but she also knows Kara has to figure that one out on her own. 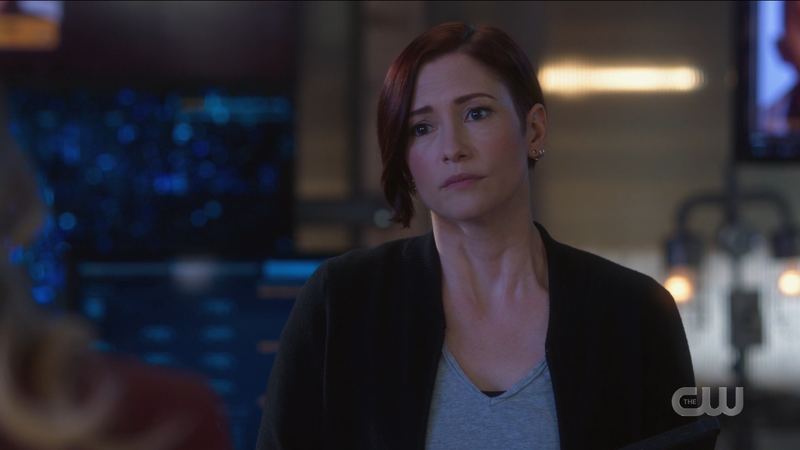 Me when my straight friends explain to me an issue LGBTQ+ people face as if I, myself, have not faced it. Trying to be supportive but also wondering where the hell they’ve been.

In her dream attic, Nia is playing with little Maeve, and she realizes she’s holding a ball of light. The little girl asks her for the light, says if Nia gives her the light she’ll love her forever, but as soon as Maeve touches it, it burns her. Nia wakes up crying, knowing what the dream means. The ravens are Maeve. Nia knows how much her having these powers hurt Maeve, because all Maeve ever wanted was these powers. So maybe Nia has been holding back, not wanting to let her light shine too brightly, because even though hiding her light was hurting her, she knew letting it glow would hurt Maeve. 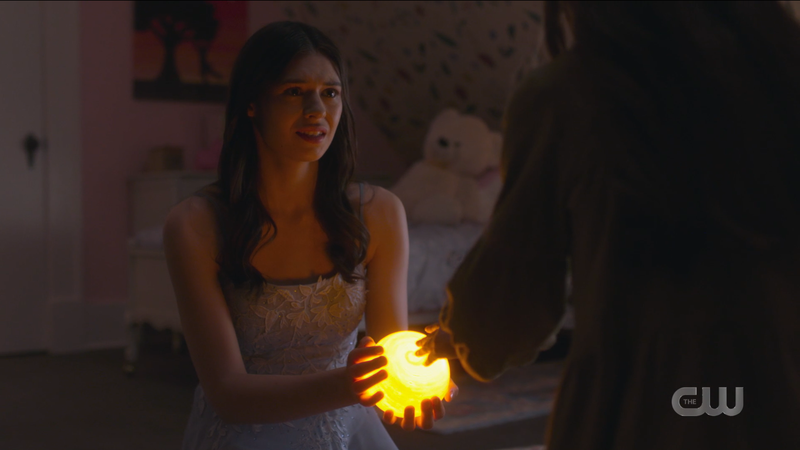 If your light is too bright for someone, don’t dim it, just tell them to get sunglasses.

But the thing is, Nia isn’t doing anything TO Maeve, even though that’s how Maeve feels. It’s not right of Maeve to make her jealousy and hurt feelings Nia’s problem. To lash out and make it personal when it’s really an internal feeling that could have been worked out with uninvolved parties instead of making Nia feel guilty for doing something she loves. Maeve’s feelings are valid, but her reaction is unfair to Nia. And frankly a bit hypocritical, because when the roles were reversed, when Maeve thought she was getting the powers, she didn’t seem to care how Nia felt about it.

Nia’s mom says that her authentic self is the greatest gift she can give the world, and hopefully Nia really hears that.

Supergirl goes to the councilwoman to talk about recidivism and gentrification. 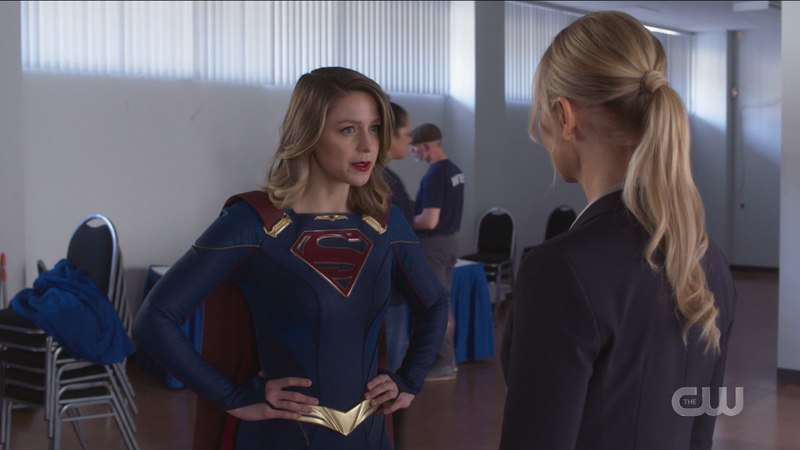 At least she didn’t get the Superfriends together to sing Imagine?

But the councilwoman won’t hear her. She says she’s doing it for the community and that she doesn’t want “criminals” in the neighborhood, so Kara knows she’s really not hearing her.

When she gets back to the Tower, Kara finds Kelly training again, and joins her. They both have had DAYS and are taking out their rage on some equipment. 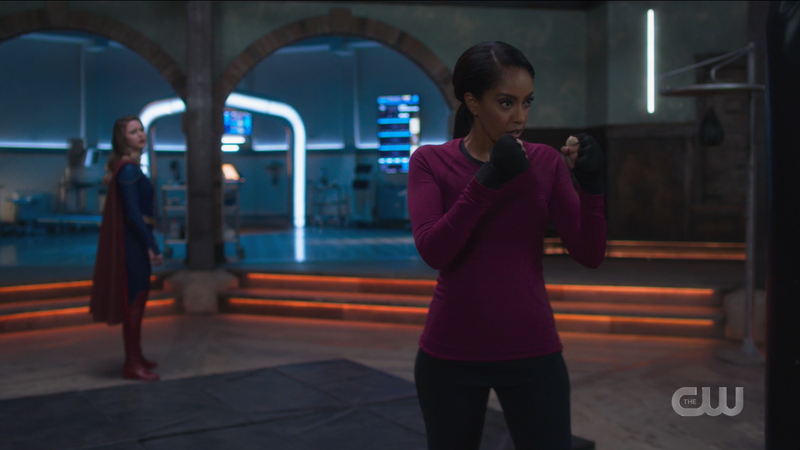 I am just so obsessed with Kelly having a relationship with Kara that has nothing to do with Alex.

Kara tells Kelly that she thinks she’s being a bit hard on herself. But Kelly is honestly freaking out a little. She doesn’t have powers, or a magic glove, getting the moves right is her only way to fight alongside the Superfriends. But Kara reiterates what Alex told her, that the move she DID do was perfect for the situation, even if it wasn’t her original goal. Kara says Kelly needs to see that she’s as capable as everyone else already knows she is.

Next page: A couple of gay lady superhero’s flirting (no, not Kara and Lena this time).