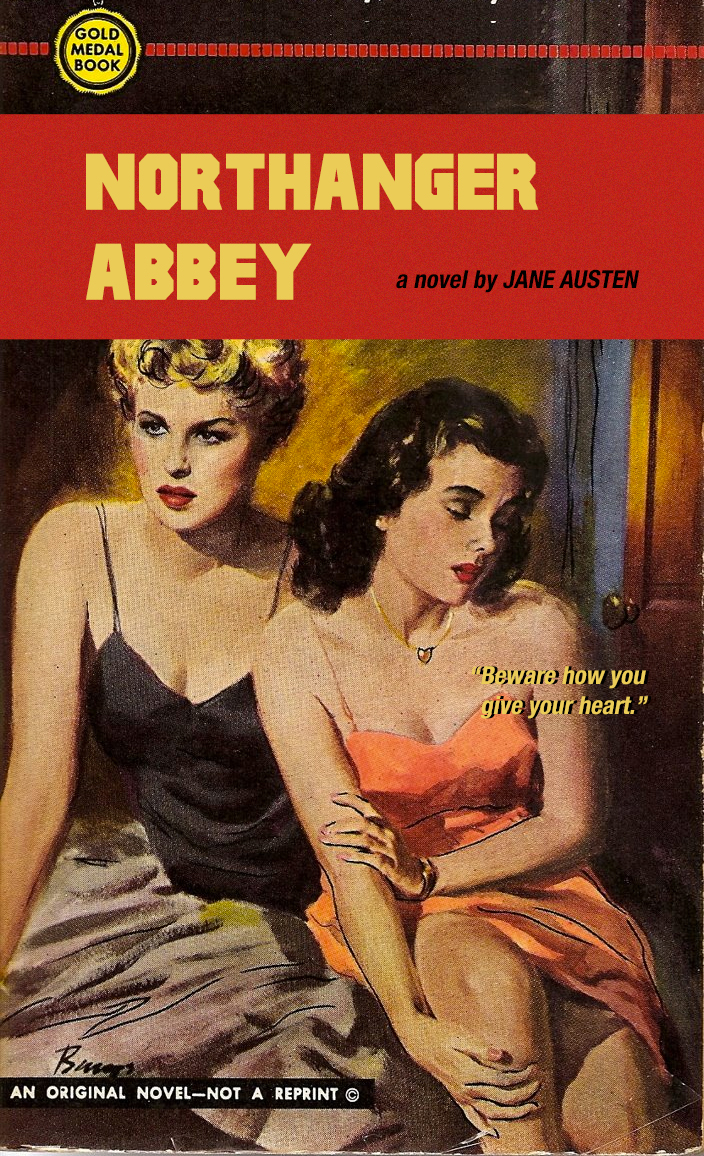 When naive, bookish, kind of goth tomboy Catherine goes on vacation to Bath with her family friends, she’s psyched to immediately meet Helena Tilney, who is cool and interesting and also loves books and knows all the good parties in town. Through her friend Isabella, Catherine also meets Joanna, who is sort of fun but also has auditioned twice to be on Bad Girls Club and really thinks the third time is gonna be the charm. As the summer progresses, Catherine watches Isabella break hearts all over Bath, while trying to avoid the increasingly exhausting attentions of Joanna and also getting weirdly into her beloved true crime novels. Catherine finally turns down Joanna, who does not take it well and vows to talk shit about her to all their acquaintances, and alienates Helena when she gets tired of Catherine’s true-crime-fueled suspicions that everyone around them is an axe murderer, which are really weirding out Helena and her whole family. Dejected, Catherine begins the journey home after Joanna turns pretty much everyone in Bath against her — before Helena catches up with her and says she’s sorry, she loves Catherine even if she is a morbid weirdo, and that they can make collages of The Craft and Wednesday Addams together. They live happily ever after and throw really good Halloween parties. 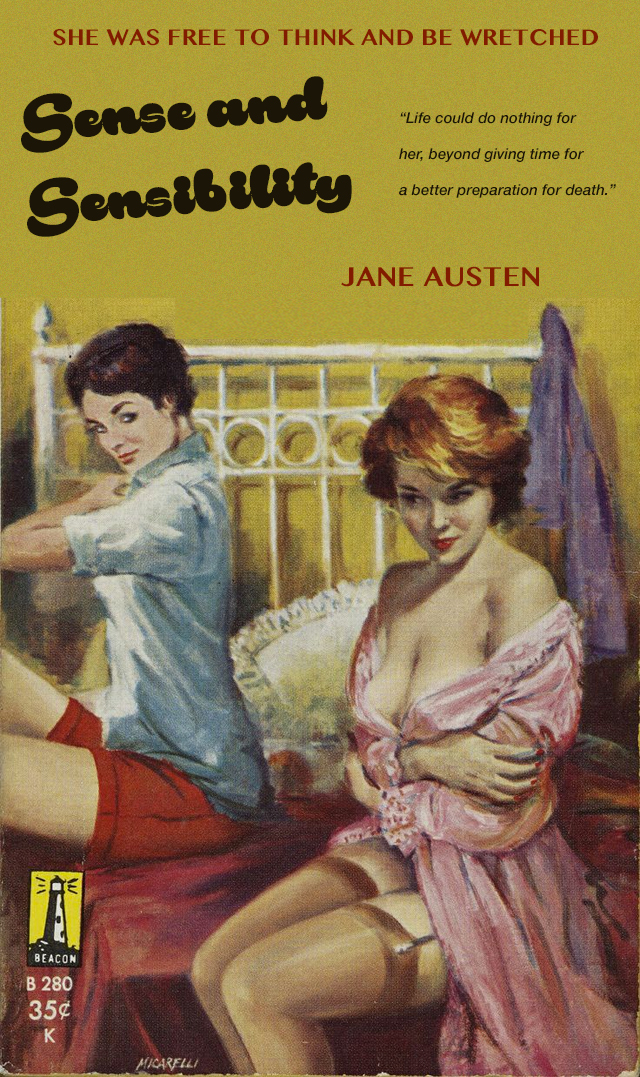 Unmarried sisters Marianne and Elinor take to the countryside, having lost the favor of their wealthier brother and his sister-in-law. There, Marianne meets Brandalynn, a country gentlewoman who enjoys cigars and complicated cocktails, but spurns her because she thinks Brandalynn’s too old for her and that her successful career as a large animal vet is unbecoming. Instead, Marianne is drawn to Wenda, a dashing and urbane young woman with the most fashionable of undercuts, who she meets while on a walk and who woos her with smoldering harpsichord ballads that she writes herself in the style of Chris Pureka. In the meantime, Elinor is getting closer to the enigmatic Edwina, who she’s super into until she finds out that she’s still living with her ex, Lucy Steele, who she doesn’t have feelings for anymore but they share a dog and their apartment is rent-controlled and if Edwina moved out Lucy would probably have to move back in with her mom, and Lucy’s mom is a total bitch. Marianne’s heart is broken when Wenda ghosts and moves to Portland to become a craft brewer, but decides to give Brandalynn another shot when she sees her on Tinder and finds that actually they really click. Edwina is suddenly single when Lucy moves out because she’s met an up-and-coming fashionplate model, and she and Elinor are finally able to make it work. 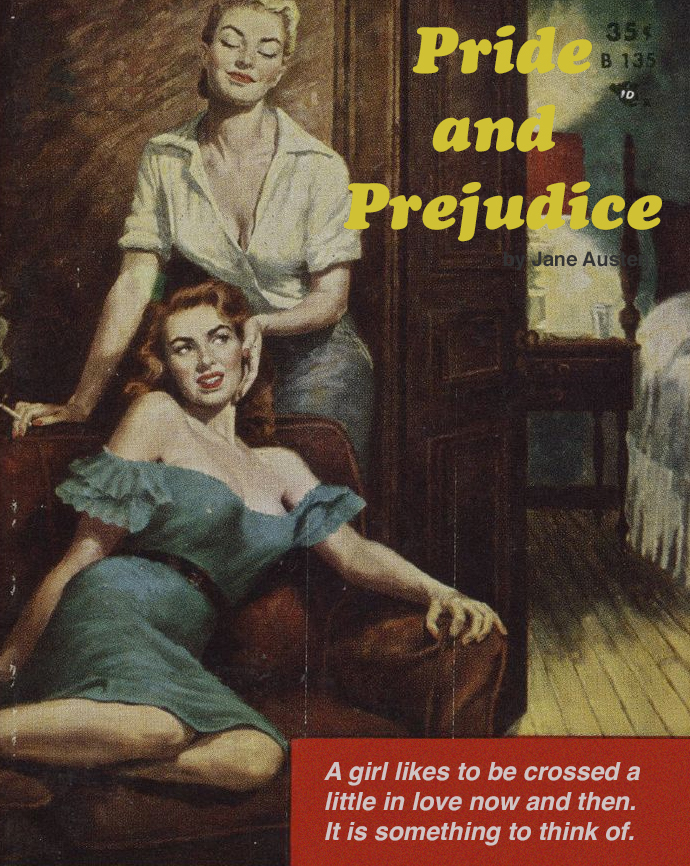 Elizabeth Bennet lives out in the country with her parents and four sisters, of whom she is closest to the oldest, Jane. Their world is turned upside down by the arrival of wealthy bachelorettes and close friends Ms. Charlene Bingley and Ms. Fiona Darcy. Charlene and Jane hit it off immediately, bonding over being generally very kind and good-looking and a little bit boring. Unfortunately Fiona is a stuck-up monster, and Elizabeth is annoyed she has to put up with her if she wants to hang out with Jane and Charlene. As they keep bumping into each other at social gatherings, Elizabeth begins to realize that Fiona is more just kind of awkward than a jerk, but still isn’t a huge fan. Then, when Elizabeth’s younger sister Lydia gets a really ill-advised courthouse wedding with her annoying on-again-off-again girlfriend without consulting anyone first in the heady rush of the recent same-sex marriage legalization, Fiona, surprisingly, steps in to utilize her degree in family law to help them quickly negotiate a legal separation the next day with a minimum of drama. Fiona also confesses her love to Elizabeth, and says that being a total weirdo is just how she lets girls know she’s interested. Although she’s initially skeptical, Elizabeth is eventually won over by how Fiona helped Lydia, and also her sweet vinyl collection. Eventually, the two have a small ceremony on Lake Michigan the weekend after Charlene and Jane’s extremely Pinteresting treehouse wedding. 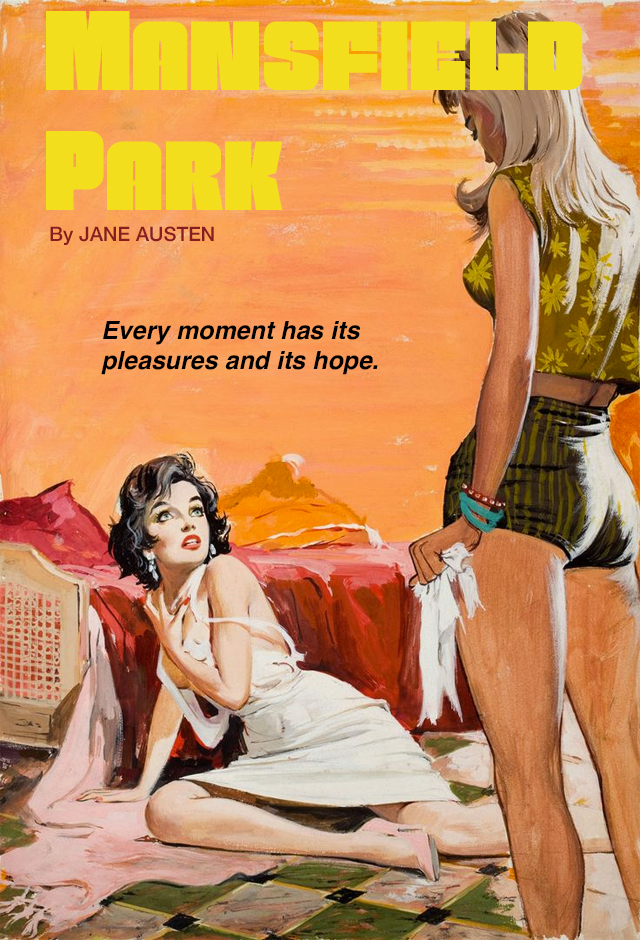 Insufferable uptight raw vegan Fanny Price has been raised by her rich aunt and uncle, because her immediate family is poor and does not have the money for the Vitamix and fruit dehydrator she requires. Fanny hates all of the relatives who are housing and feeding her except for Ellen, who is very polite and likes to help Fanny make crackers out of leftover juice pulp. Fanny actually thinks she has feelings for Ellen, which is weird because they’re cousins but pretty normal in the Regency era, I guess. Hot upper-crust sisters Hazel and Mary move into town, and Mary immediately locks her sights on Ellen while flirtatious Hazel begins breaking hearts left and right. Mary is a little disappointed that Ellen’s only aspiration in life is to be a sustainable urban farmer, and works on convincing her to aim higher, like starting her own line of high-end ethically sourced cotton underskirts. Hazel gets bored of partying and decides to emotionally manipulate Fanny’s heart, but it backfires when she finds that Fanny is so emotionally unavailable and aloof that Hazel ends up obsessed with her. Ellen realizes that Mary never truly saw her and her zucchini plants for her, and just wanted to be trendy; Hazel goes on an incredible tear of two-week-long relationships to rebound from Fanny, confirming Fanny’s suspicions that she dodged a bullet. Fanny and Ellen are left free to consummate their boring and gluten-free love, even though they are, again, first cousins, because that was a normal thing to do, apparently. 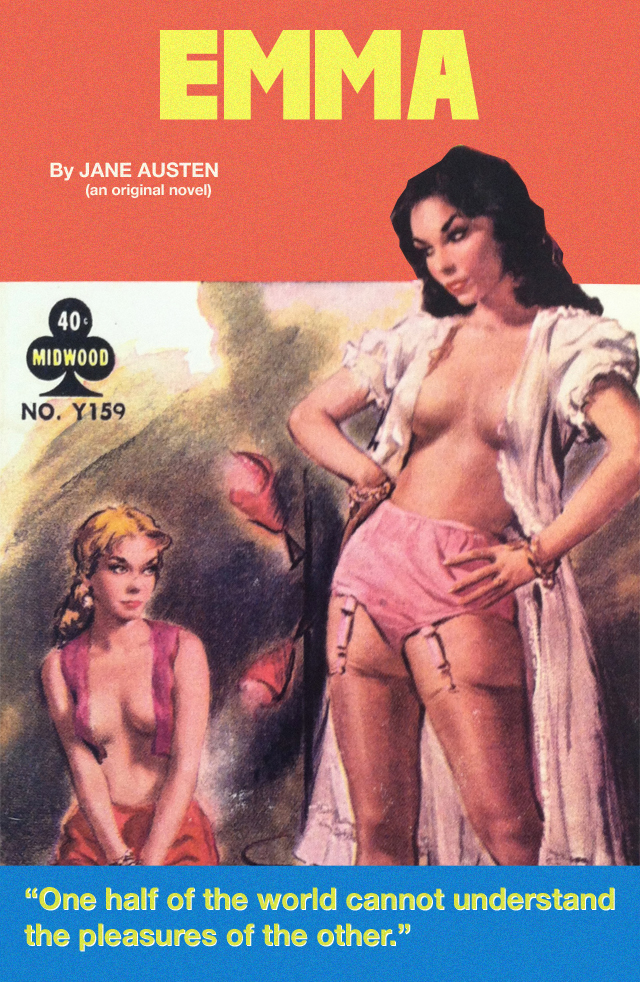 Emma had a ton of fun at her friends’ recent wedding, and tells her best friend Georgia Knightley that she’s going to make sure their whole circle of friends is paired up by the end of the year so she can keep going to parties with open bars. Georgia points out, correctly, that this is a terrible idea, but Emma won’t hear it. First, she persuades her friend Harriet to stop seeing Rita, who she’s been on three dates with and is super into, because Rita isn’t marriage material. She tries to set Harriet up with Philippa, who is a rising star in the Regency-era social sphere, but Philippa fashionably elopes with Augusta instead. Hot new it girl Jane Fairfax crops up in their social circle, and Georgia thinks Jane’s going to start dating Frances, but Emma is too focused on being weirdly jealous of Jane to agree. Philippa is being a huge bitch to Harriet, who is already sad that Emma convinced her to stop seeing Rita for what turned out to be a terrible reason, so Georgia steps up and starts hanging out with Harriet a lot more. Georgia turns out to have, again, been right, and Jane and Frances have a whirlwind romance and are super in love. Surrounded by romance, Harriet confesses to Emma that she’s fallen for Georgia after Georgia was such a good friend during her recent rough times; upon hearing this, Emma realizes that she actually has feelings for Georgia, which is a super cold thing to do to Harriet but makes sense because Georgia has been right about everything since page one. Emma tells Georgia how she feels, and Georgia is like duh, you idiot, and asks her out. They’re grossly cute and happy. And! Harriet is able to get back together with Rita, finally. Jane and Emma even manage to make up, and Emma learns an important lesson about chilling out a little. 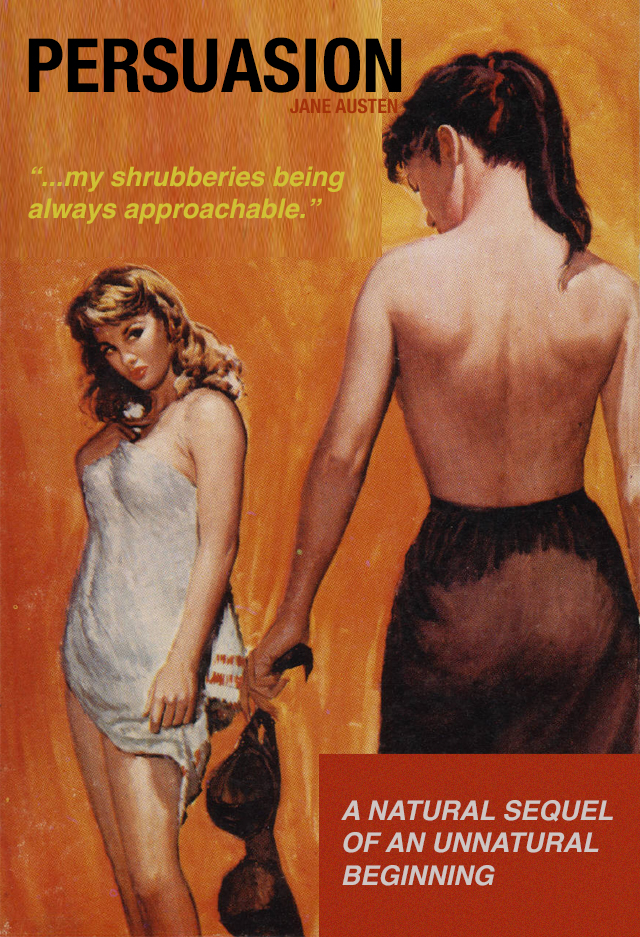 Anne and Faye dated for like five minutes in school, a fact which most people don’t know because it was so brief, but which Anne still kinda thinks about sometimes. They haven’t seen each other in years when Anne’s family moves into Faye’s neighborhood because they’ve taken a financial hit. Anne goes with Faye, her sisters and a few friends on a beach vacation, where Anne attracts the attention of local rich hottie Willa Elliot. Seeing this, as well as how much of a babe Anne is hanging out on the beach, Faye remembers why she liked Anne back in the day. After the beach weekend, Willa continues to flirt with Anne, although Anne is a little weirded out that Willa doesn’t seem to have any other friends, or any social media accounts, and still uses hotmail. Shockingly, an acquaintance reveals that Willa’s interest in Anne is likely more opportunistic than romantic, for financial reasons that mostly involve primogeniture laws and therefore do not translate very well to f/f storylines. When Anne writes an impassioned and typo-ridden screed on Instagram about the importance of only keeping people around you that you can trust to be real with you, Faye realizes in the twenty minutes before Anne deletes it how much Anne really means to her, and sends her a DM to tell her so. The two of them get brunch the next morning and agree to see where this goes, keep it casual, before adopting three rescue cats together and moving into a tiny house.