WHO WE’RE STICKING IT TO:

The man. Duh. This week’s Ethicist column at The New York Times features a gay advice-seeker who’s married to her partner, but whose marriage isn’t recognized by their state or the US federal government. 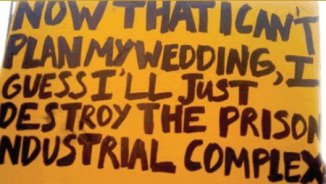 My same-sex partner and I are legally married in another country, a marriage not recognized by our state or (obviously) federal government, with significant negative consequences to our modest financial situation. My partner would be eligi

ble for some government aid if she applied as a single person, but it feels disingenuous to do so, because as a family, we make well above the poverty line. In some sense, however, the government owes us this money since it unjustly disregards our marriage. Should she apply?

The Ethicist’s answer: Yeah, duh. It’s not your fault the government has created discriminatory and misleading standards, or that it’s fucking itself over by not recognizing your family as a family. Or, as he put it: “…you have no duty to set stricter standards for such programs than the law itself.” And as you may have noticed, as far as the law and queer people go, STANDARDS ARE PRETTY LOW. So, it got us thinking: what are your favorite fringe benefits of long-term disenfranchisement by the country we profess our loyalty to and the culture we grew up in? Just off the top of my head, here are the top five:

1. SLEEPOVERS. If all teenage girls are boy-crazy, then they are definitely up in that bedroom calling boys on the phone all night, not making out and unhooking bras effortlessly because it’s just like yours but in reverse.
2. “Allowed me to rationalize essentially stealing from the government by getting Medicaid.*” — Riese
3. Saves you from having to sit through all those weddings and family holidays held at the houses of your religious fundamentalist cousins (timely, amirite?)
4. Lots of privacy in the locker room?
5. I haven’t tried this but I imagine that when filling out financial information for your children’s colleges it is very beneficial to look like you have one income and have two. Can someone testify w/r/t this.

*Howerver, Riese legitimately qualifies for Medicaid at the present time.

Feel free to share your favorite silver linings in the comments. Or just have a sleepover. Do what you need to do.

Our favorite former West Point cadet, out lesbian Katie Miller, isn’t giving up on the army. “I’m trying to get back into the military,” Miller tells the Associated Press. “I’m not trying to make that difficult when that occurs.” Aside from being totally Managing Editor Sarah P*lmer’s type, Katie Miller makes me feel very safe and secure and I am looking forward to the day when she is able to return to her true calling. (@advocate)

Someone on ONTD made a list of top 15 GLEE guest stars. How many guest stars have there been? More than 15? Anyhow, it seemed relevant to your interests. Kristen Chenoweth! (@ontd)

Are you obsessed with Privilege Denying Dude? Yes, I know, because so is everyone else on the internet. As you are probably aware, the popular meme was pulled off the internet for violating the intent of the original creator of the stock image somehow. The day was saved, however, by a guy named Edman. He’s offered his own image as the new Privilege Denying Dude, with the acknowledgement than in real life he is “one of the most privileged members of society” and that in the past he’s totally “been that dude.” Thanks, Edman! Thanks for being a good guy and lending your image to something dickish in the interests of ending dickishness! (@jezebel)

Sophie Aslawhere and her partner of 15 years are challenging France’s ban on gay marriage in court. “Our children are fed up of being treated as though they are on the margins of society. For example a few years ago when they held elections at our children’s school for a new parents’ organization, they didn’t accept my partner’s vote. That marginalizes our children and that shouldn’t happen.” It’s nice to see a “for the children’s sake” argument utilized where it actually makes sense! France, we are crossing our fingers for you. (@queerty)

A Twitter account that I’ve never heard of but is probably someone important has reported that Lady Gaga’s new album, Born This Way, will have 20 new tracks on it. I know, I know. I was really overwhelmed too. It’s ok. (@ontd)

A landmark study has shown that a new antiretroviral drug taken orally reduced the number of HIV infections among gay men by 44%. While the article says “a measure of caution remains,” Obama said that: “I am encouraged by this announcement of groundbreaking research on HIV prevention… While more work is needed, these kinds of studies could mark the beginning of a new era in HIV prevention. As this research continues, the importance of using proven HIV prevention methods cannot be overstated.” (@healthasiaone)