Sunday Funday is a time of joy and celebration, so we are not going to remark upon the emotional toll that the insane rollercoaster of DADT news is having on us, and merely be glad that today is a moderately positive day in this special magical journey that we’re all on. A Washington court ruled yesterday that Margaret Witt, an Air Force medic who was discharged under DADT, must be reinstated because the military could not prove that her sexual orientation had an effect on unit cohesion or morale. Specifically, the court has ruled that she should be given the chance to return to her job “at the earliest possible moment,” and that DADT violated Witt’s due process rights under the Fifth Amendment. (@washingtonblade) 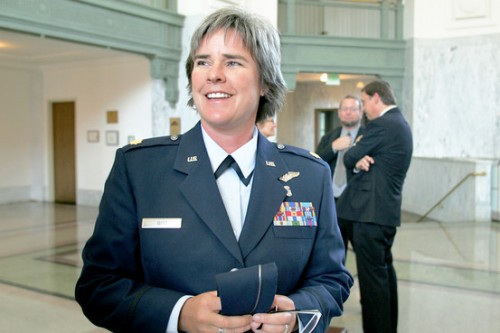 We have very little knowledge of the repercussions of cases like this; we know that the ruling on Witt’s case only directly applies to Witt, and does not imply that anyone else needs to be reinstated or force the military to repeal DADT. But, like, it can’t mean anything bad, amirite? At the very least, I think it’s safe to count this as a moral victory, or at least one singular instance of the outside world confirming our understanding of how the universe works, therefore postponing our complete emotional breakdown over this issue for a short period of time. And seriously, thank God for that.

I am simultaneously excited about finally reading a review of this movie and enraged that someone else got to it before me. IT IS ONLY PLAYING IN VERY LIMITED THEATERS IN MY CITY. But just you watch, I will review this movie. I will review it so hard. Anyways, here’s what Slate said. “You think it’s a conventional indie biopic of the Beat poet Allen Ginsberg, with an earnest but mannered lead performance by James Franco. Instead, it’s a minimalist oddity, a full-length movie devoted to the recitation, comprehension, and appreciation of a single poem—that would be “Howl,” of course, published by City Lights in 1957 and made famous in a landmark obscenity trial.” omg omg omg omg omg HOWL (@slate)

I think Riese’s birthday may have been “Celebrate Bisexuality Day”? Is it me, or is that really funny? Also, Queerty used a photo of Malcolm X for their post on this, which I have a lot of feelings about. The end. BISEXUALS WE LOVE ALL OF YOU. (@queerty)

Jill Johnston, celebrated author of ‘Lesbian Nation,’ has passed away this week at the age of 81. She will be fondly remembered for her seminal and intensely personal writing and her contributions to political lesbianism/lesbian politics. (@kansascity)

Hi, do you want to listen to every track from the Television Event of The Week, the Britney/Brittany episode? Or would you like to talk about race, gender and sexuality in the second season? Because both of those are totally options you have on the internet right now. (@jezebel) (@ontd)

Continuing on the theme of not understanding anything that is currently happening w/r/t the legal system in our country, somehow Stephen Colbert was allowed to testify in character on a Congressional hearing on migrant workers. That happened? Yeah, I know! (@bestweekever)

Are you one of the approximately eighteen million thousand Americans reading Freedom right now and therefore preventing me and everyone else I know from getting it from the library? If so, maybe you are interested in hearing Jonathan Franzen to talk to Slate about his book and stuff. “Q: Obama famously was photographed with a copy of “Freedom.” If he read it, what do you hope he took away? A: I hope he was so preoccupied with urgent national affairs that he wasn’t able to take away much more than a general enjoyment of the experience. I didn’t vote for him in expectation of his mooning around pondering literary novels.” (@slate)