mild spoilers in intro, if you want to avoid them you can scroll down to the outfits, which are mostly spoiler-free!

I don’t know if y’all have heard, but Netflix recently released a new show called Stranger Things — which I devoured in eight hours this weekend. The show is supposed to be Netflix’s homage to 80s horror films, and as someone who knows very little about the 80s and very little about the horror film genre, I think it’s a pretty good show. The plot centers around a young girl named Eleven, played by Millie Bobby Brown, who has been raised in a secret government facility by a doctor she calls papa (barf) who makes her do awful things with her mind (like, killing cats awful).

But the surprise breakout star of the show is Barb, played by nineteen-year-old Shannon Purser. Barb is like everyone I knew and hung out with in high school, but with way better fashion. She studies hard, she’s serious about her female friendships, and she’s super snarky. Unfortunately for us, we only get one episode with Barb before she’s abandoned by her so-called best friend Nancy, and then dragged into another dimension by an evil monster and killed. Oh, Barb, you deserve so much better.

Barb’s style is “I’ve got really strict parents who don’t let me wear anything too scandalous but I read Vogue religiously.” We only see her in two outfits, but they leave an impression. Barb isn’t afraid to play with patterns; the first time we see her, she’s wearing a plaid blouse. Who does that?? Barb does, and it works. She’s also all about embracing her femme side with lots of frills, pink, and perfectly swooped bangs. She’s everything I wanted to be in high school but wasn’t. Barb’s outfits look effortless — like she just threw something on and didn’t take every single item out of her dresser that morning before deciding on a mediocre pair of leggings and a t-shirt. 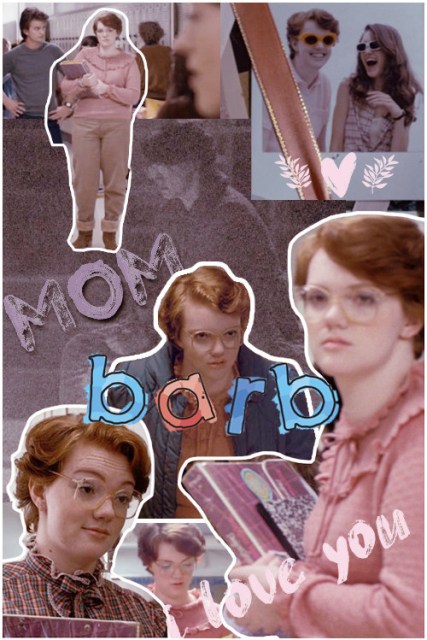 Barb loves a high collar, and she wears it well. Anything with a bow attached to the neck is even better. It’s the small touches of femininity that make her style look so graceful and elegant, but it’s never too busy that it distracts from the real reason she gets dressed every day: to go to school and get into a good college. God, I was such a Barb. If that plaid blouse taught us anything, it’s that Barb believes in boldly wearing patterns or textures and owning it. Whether it’s a peter-pan collared blouse covered in cats or a vintage plaid shirt with a ruffled collar, Barb isn’t afraid of anything, and she wants to inspire you to be fearless, too. Due to the injustice of Barb’s limited screen time, we don’t get to see Barb in more relaxed outfits, but I like to imagine that when she and Nancy are hanging out studying for a Bio exam, she wears fun graphic tees that express things like her dedication to supporting her girlfriends.

Carreerist and Dearest Top / To the Nines Top / Vintage Pretty Victoriana Blouse / Workshopping Around Town Top / Advert Yourself Top / Up, Up, and Amaze Top / Cross Your Universities Top / Style You Can Laugh About Tee / She Eye to Eye Shirt / Victorian Revival Vintage Blouse

Barb is that person that basically has three kinds of bottoms that she wears over and over, but she wears them so well that it never gets old. She’s a classic classy broad, and likes her neutral browns and classic denim. When she wants to be more casual, she balances out her ornate blouses with a simple pair of jeans, chinos, or a skirt. When she wants to add a little more pizazz, she adds suspenders or wears a wide-leg pant in a dark neutral to balance everything out.

I wish I could see Barb’s accessory collection. She’s the kind of person who wants her clothes to say something, which is why I bet she’s obsessed with enamel pins. She also seems like the person that would want her jewelry to be functional and attractive, and so I bet she takes a lot of pride in picking out the perfect watch. Even when her outfits are a little more toned down, she pulls out her plaid tights to throw some excitement below the belt. When she’s wearing a high-collared shirt, I can imagine that she sometimes glams it up with a chunky bejeweled necklace. Also, because Barb is the BFF Nancy doesn’t deserve, she probably would’ve done something like buy them a Best Friends necklace with two halves that separate. I bet she still even wears her half tucked underneath her shirt every day, even though Nancy keeps hers at the bottom of her jewelry box.

Barb understands that a good shoe can make the outfit. The two pair of shoes we saw her wear in the show were both sensible (because what high schooler is going to walk around school all day in 4-inch heels?) and adorable. I bet most of Barb’s shoes are her mom’s old shoes — well worn, well loved, and super cute. She’ll throw a pop of color in her shoes for some extra excitement, or go neutral and let the clothes speak for her. Either way, Barb’s shoes are the final step to pulling together the perfect outfit that allows her to walk into school every day with her head held high because she knows she looks good. It’s hard to walk confidently if your feet don’t feel just as great as the rest of your body, so pick any of these and you’ll be side-eyeing like Barb in no time.

The very last time we see Barb, she is pleading with Nancy to come home with her, and wearing a pink blouse, mom jeans, and a blue puffy coat. That coat was probably my favorite character of the show. I love a good puffy jacket. They’re lightweight but incredibly warm, and they add a sporty vibe to any look. Unfortunately, this coat doesn’t have the best memories associated with it, but it’s a great coat for the upcoming fall/winter.

Bernardo Quilted Anorak / Patagonia Bivy Down Jacket
Barb, I miss you already. Thanks for teaching me to wear my favorite mom jeans with pride. I wish I’d gotten the chance to know you better because not only were you an astounding dresser, you were an amazing friend. I knew it from the moment you stepped on screen, even if it took way too long for Nancy to realize it. Here’s hoping that generations of teenage girls write fanfiction about you and Eleven, living happily somewhere in a world where men and boys aren’t trying to ruin everything. 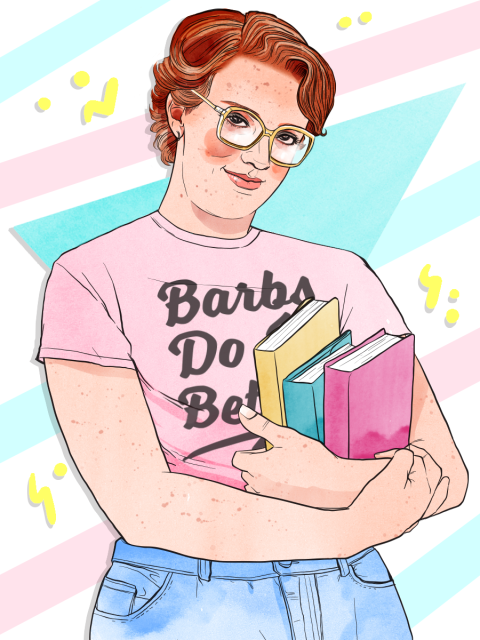