Welcome to the fifth installment of Style Thief, where I steal the clothes off queer style icons’ backs. Metaphorically, that is. I’ll try figure out just exactly what makes queer style icons tick by breaking down their look into itty bitty bite size pieces. I get a lot of questions about how to look like different celebrities/characters, so I’m finally tackling the question “How the hell do I dress like that?”

In this very special edition of Style Thief I’ll be setting aside my usual One Icon One Article policy to take a look at the Fashion Ghosts of New Year’s Past. I’ll be presenting nine queer style icons in their New Year’s Eve best (or their New Year’s-iest outfit I could find). We’ll figure out exactly how to steal their look for that big bad moment when the clock strikes midnight 2013. 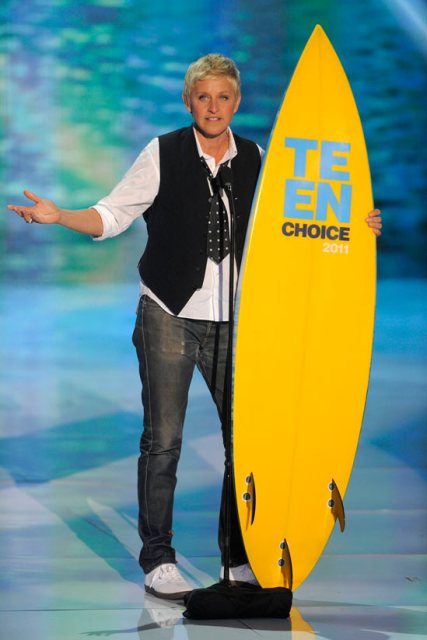 To my surprise, Ellen Degeneres’s Teen Choice Awards 2011 outfit was the first thing I thought of as I started to ruminate on iconic New Year’s Eve styles. Despite the large kid’s surfboard, Ellen’s look has that perfect balance between caring and not caring. While almost definitely meticulously planned, Ellen’s look seems to claim that this is the aftermath from a much bigger, much more important party she’s just ditched out of. 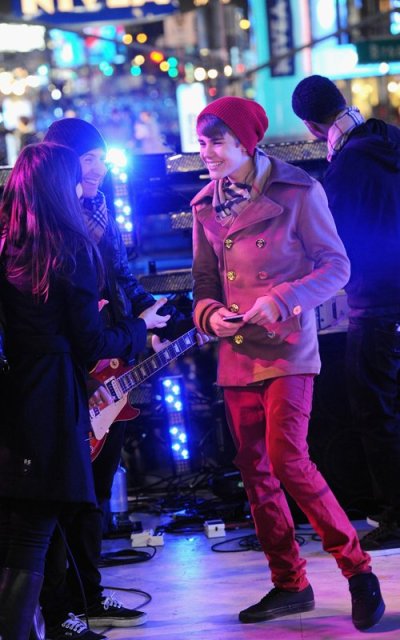 The Biebster’s New Year’s look is great for anyone daring enough to face the crowded freezing cold at Time Square. The key is to pick a hat and scarf that compliment and complete your look instead of clash or cover it up. 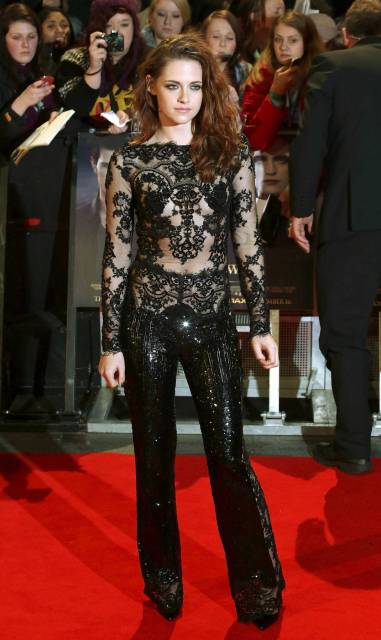 While K. Stew doesn’t show her face around the celebrity New Year’s Eve circuit much, she’s been turning heads at the Breaking Dawn Part II premieres. New Year’s is the best time to match glitter with lace. While K. Stew is technically wearing a jumpsuit, her outfit is a great example of how sparkly pants can modernize and uplift a sheer lace top. 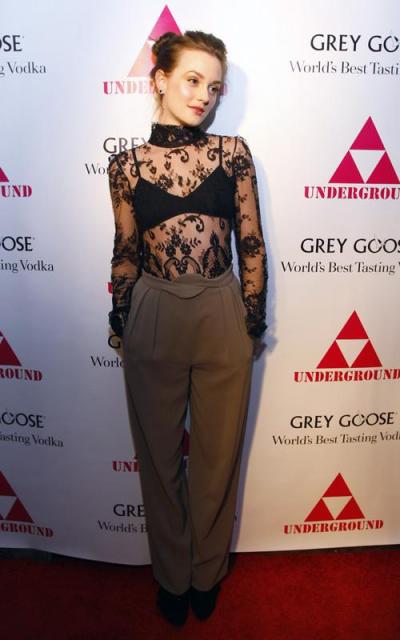 Leighton Meester is my personal favorite, perfect, amazing style icon. If K. Stew’s glitter-pants are a bit much for you, perhaps try Leighton Meester’s high waisted trousers instead. While hoards of folks will be using this opportunity to double down on All Black All Sequin, you can also draw attention by going against the current and choose softer, dimmer fabrics. 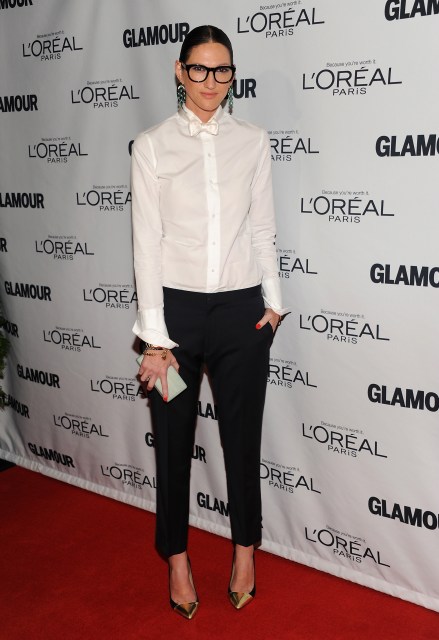 Jenna Lyons can be a savior for those straddling the butch and femme ends of things. Never one to disappoint, Lyon’s outfit at the 2012 Women of the Year Awards is the perfect candidate for a more formal New Year’s Eve.

If you’re on the femme side of things, nothing is easier for New Year’s Eve than a little black dress. Lilo shows us exactly how to take a somewhat simple dress and play it up with accessories. Who says you can’t wear sunglasses indoors at night in the middle of winter. 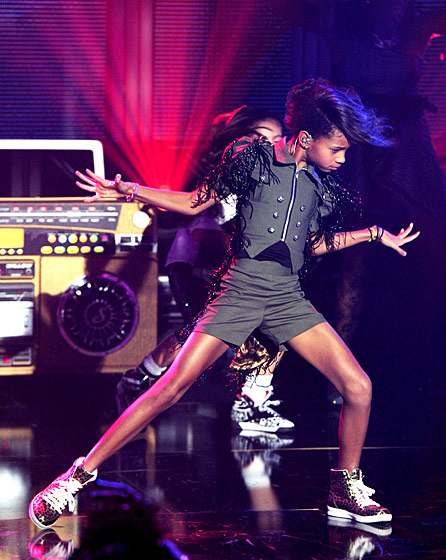 I can’t exactly explain how a pre-teen girl became a queer style icon, but Willow Smith knows how to rock a vest/blazer, shorts and sneakers like nobody’s business. 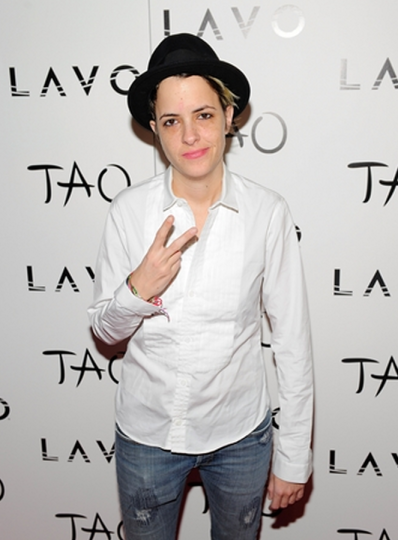 Sam Ronson shows us just how you can take your regular everyday look and almost effortlessly transform it to be New Year’s Eve ready. Just swap a tuxedo shirt for your regular button-up and mix in a dapper black hat and you’re good to go. 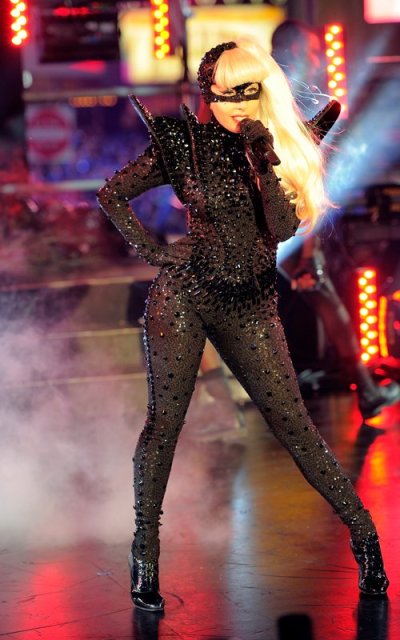 Um. I got nothing on this one. But if Lady Gaga teaches us nothing else, it’s that when it doubt, go black and studded. What’s the worst that could happen?

What all these icons have in common is that they take a special occasion as an opportunity to pick a head to toe look and execute it full throttle. New Year’s Eve is the perfect night to be adventurous and wear something you’ve always wanted to or never thought you would. It’s practically risk free since, as you already know, the next day is a whole new year.

If there’s a queer style icon you’d like to see stripped down in Style Thief, send me an ASS message, ask on my formspring, or tweet me @Ohheyitslizz Past. I’ll be presenting nine queer style icons in their New Year’s Eve best (or their New Year’s-iest outfit I could find). We’ll figure out exactly how to steal their look for that big bad moment when the clock strikes midnight 2013.