You know what my least favorite part of Coming Out Day is? The straight people who appropriate it.

And never has that feeling flared up so strongly as yesterday when ABC News published an article about Timothy Kurek, a 26-year-old straight Christian man who lived for a year as a gay in order to understand the gay plight. Also: his memoir about the experience and his subsequently acquired empathy, Cross in the Closet, came out on Coming Out Day. Maybe I’m just grumpy and jaded. But this guy spends one year undercover in the gloomy, dismal underground world of homosexual heathens, and then he and his new-found compassion return to straight male privilege with the added bonus of a book deal, and all I can think is HOW NICE FOR HIM, as my eyes roll back into my head.

Kurek grew up as a religious Christian in Nashville, where he was told that homosexuality is a sin by his church. He drank the Kool Aid so eagerly, in fact, that he not only became That Guy who would tell his gay friends that they were abominations — his friends’ parents would call him to “set their kids straight.” But then, something magical happened: one of his friends came out to her parents and was disowned by them. As she cried in his arms about it, Kurek had a sudden spark of self-doubt, and it occurred to him that maybe he was wrong.

But it seems this thought was more of a hypothesis that needed testing. Rather than developing a sense of empathy from listening to the stories of marginalized people, Kurek needed to actually pretend to be one. For a year.

For the sake of this espionage mission, Kurek “came out” to everyone in his life except for his aunt and two friends, one of whom pretended to be his boyfriend for the year, so that he could have an excuse not to actually have gay sexual experiences. But by giving himself a guaranteed safety net, Kurek made sure that his queer year couldn’t actually ruin his life. It was, after all, an experiment.

This safety net was made up of people who supported the experiment, and who applauded his efforts; witnesses to his brave self-sacrifice. So instead of letting himself experience the full-on shame from those he “came out to,” Kurek made sure he didn’t lose the privilege of approval. Though he claims to have felt isolated, he never actually was. 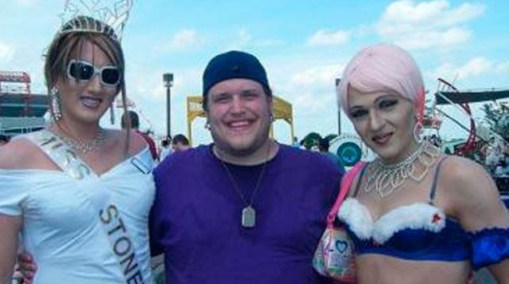 Safety net aside, is it even possible to experience being gay without actually being gay? It’s one thing to do as Kurek did and claim gayness, to hold hands and embrace with someone of the same gender, to occupy queer spaces; but what does all that matter if you don’t actually feel the attraction? If you know that whenever you want, you can return to your Real Life, shedding the stigma as quickly as you gained it? I don’t doubt that he felt ostracized by his community and his family — his mother even wrote in her diary (he snooped it) that she’d rather have terminal cancer than a gay son. But since he’s not really gay, could he read that and actually experience shame? At most, the prejudices of his mother were revealed to him. But since her homophobia wasn’t actually about him, Kurek didn’t have to take it to heart. He didn’t have to feel the self-loathing that reaction would have inspired in a real gay person — he only had to feel disappointment in his mother for her reaction. It was literally just fodder for the memoir.

And how many memoirs by actual queer people got turned down so that this one could be published? Queers have so many stories to tell: stories of shame, isolation, strength, community, bravery — stories with real consequences, with lives on the line, where getting shunned by everyone you know because you’re gay is a devastating, life-altering possibility, so much bigger than a lesson learned about prejudice. There are infinitely more queer stories than their are published queer memoirs.

As a person with gay people in his life, Kurek could have asked them questions, could have listened to their stories and taken them to heart. He could have been a supportive and respectful ally. Maybe he even could have put together an anthology of their stories, writing an appropriately respectful introduction about the importance of the voices of marginalized people.  But he just couldn’t take other people’s word for it. It seems the rest of the world can’t, either — does it really take a straight man to get our stories told and validated?

What’s more, by publishing and promoting his memoir on Coming Out Day, a day that is supposed to be ours for telling our stories and giving other members of our community the space to come out, Kurek is occupying space that doesn’t belong to him. Can’t we have anything nice? I don’t want to read a story about a straight man who walked in our shoes, only to take them off at the end of the day and make some money off of the simple lessons he learned. I think it’s great that his mind was changed, that he no longer thinks that gay people should rot in hell. But I find the lengths he had to go to to get to that conclusion deeply disturbing. People can develop empathy just from listening to others. Why was he above that?

The people whose minds will be swayed with this book probably would not read a memoir by an actual queer person, so in that sense, Kurek is doing somewhat of a service. And it’s true that he’s donating part of the proceeds to a charity that helps homeless LGBTQ youth. But by nominating himself to “bridge the gap” between the queer community and people who think we are abominations, Kurek is making a very strong statement about what voices count, and whose voices have the power to create change. It seems that as long as straight memoirs get priority over queer ones, privilege is going to maintain its structure, and queers will remain a subject to be discussed, rather than a group of people to listen to.