Straddler On The Street: Maddy, 22

Maddy is a junior at Barnard, majoring in Women’s, Gender & Sexuality Studies, with a concentration in Race & Ethnic Studies and minoring in Spanish. She took a year off between high school and college, attended Kenyon college for a year and then transferred to Barnard last year as a sophomore. Now she’s super involved with Q, Barnard’s only queer group, and has been the social chair and now is one of the two presidents of the group.

Maddy is also a peer educator for WellWoman, Barnard’s health and wellness office, a member of the QueerCentral committee, a group of students and administrators checking in once a month to stay up to date on queer issues on campus, a Columbia organizer for IvyQ, an annual conference held by the Ivies for their queer populations, and this year’s facilitator for the Women’s Leadership Retreat at Barnard. And because she’s totally not busy at all, Maddy is now running for president of Barnard’s Student Government Association! Obviously I think you should vote for her if you go to Barnard… read on to see why! 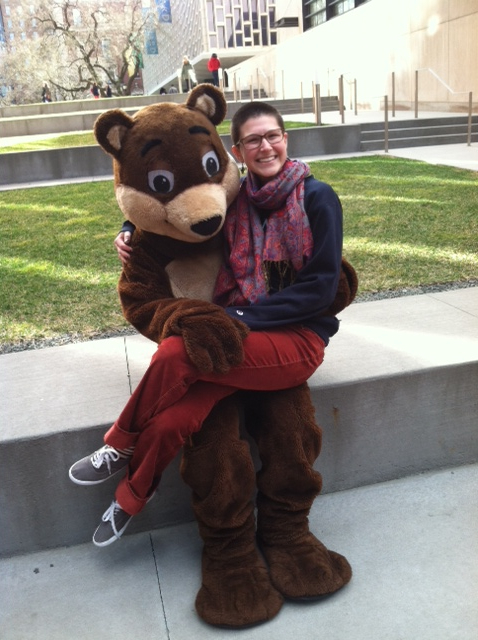 Hi! Let’s talk about your work with Q, Barnard’s queer group. Tell me a bit about it, please!

Q is Barnard’s only queer group. We meet weekly and are open to queer/gay/trans*/genderqueer/allies/everyone. This year I’m one of the presidents of the club so I organize board and general body meetings, maintain our Facebook group, do outreach to other clubs and work with administrators on behalf of the group. Our goal this year was activism through community building and visibility, and I think we’ve done a really good job. Q provides really solid support, space and social network for our community at Barnard.

A big part of your activism this year is the bathroom initiative. Can you explain to our readers what that is and how it came about?

Yes! It’s definitely the most exciting thing Q has done this year. We’ve been concerned with queer and trans* issues at Barnard for ever but decided to really start advocating for tangible and material change this year, and so the gender-inclusive bathroom initiative was born. Bathrooms are both a huge injustice and [should be] an easy fix so we’re starting there. We launched the initiative at our annual queer issues forum, an event that the president and dean of students always come to. This year we had three incredible student speakers who shared their experiences navigating bathrooms as trans* and non-gender conforming people. Our proposal of having at least one gender-inclusive bathroom in each building on campus was met with a lot of support from the larger community: the 70 people at the forum, President Spar, Dean Hinkson, and later, the student government representative council.

So the initiative worked?

Yes, the bathrooms will be converted soon! We’re also conducting an educational campaign to accompany the change on campus to explain what’s goin’ on. These posters will be hung up in every bathroom and all around campus with a map of gender-inclusive bathrooms at Barnard and an explanation as to why this is important and exciting for our community as a whole.

Thank you! I’m so psyched!

So on top of all this goodness, you are now running to be the Student Government Association (SGA) president, yes?

What has your campaign been like and why should people vote for you? It’s legal for me to tell people to vote for you, right?

I think it’s legal! My campaign is very people oriented. My biggest reason for running is to make SGA more accessible to more people on campus. I believe in the power of the student body to shape our institution, and I want to mobilize the student body to be actively engaged with growing our community. I am new to SGA — I just started working on a club task force this semester, and had never before considered it a tool that I could use. But it should be! I want SGA to be connected enough to the whole huge diverse incredible student body to advocate for our needs, wants and ideas. Also it’d be super cool for queer visibility and inclusion into the larger Barnard community to have a queer and out president! And for students who identify with other groups who don’t necessarily feel represented by the traditional SGA candidate — I want to broaden the scope of who and what people think of when they think SGA. 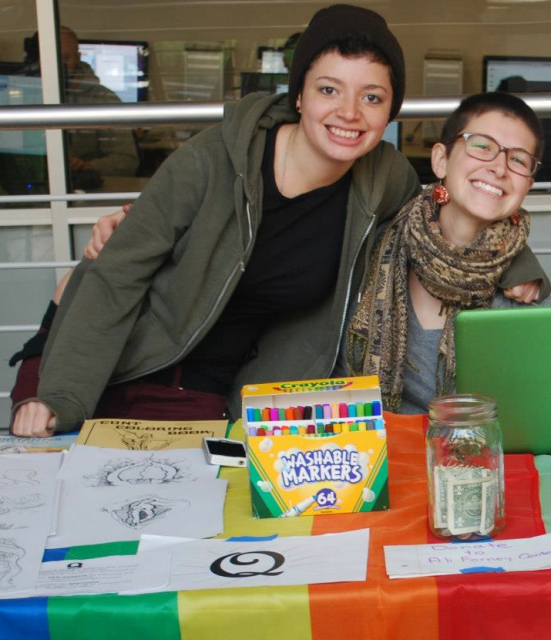 Maddy with her friend Chris (left) tabling for Q.

Well if it’s legal, I’m going on record telling everyone to vote for you. And now that I’ve quizzed you on all the serious stuff, let me ask some fun questions.

I just taught myself how to use a sewing machine so I’ve been doing that a lot recently. I’m very big on crafts, like jewelry making and stuff. I like to walk and be outside, be with friends, read not-school-things. Read Autostraddle. I tried learning to play the bass — my brother was teaching me over winter break — but that has fallen by the wayside a little bit…

I never would’ve guessed that one!

Haha, I know, so random. My dad used to travel to that part of the world for business a lot and would bring them back for me. They’re gruesome and horrifying but I love them. Oh and Murakami. But I was really disappointed with his last book, 1Q84.

As a college student, how do you navigate finding time for yourself?

It’s super important to find a balance between yourself and your life. I am still working on feeling okay about not doing anything and taking a break. I need structure… so I try to wake up early and have some routines. But also spontaneous crafting, walking explorations, cooking and baking are my times for me.

Do you have any advice for high schoolers planning to go — or not go — to college, or to college students trying to find more balance in their lives?

Knowing yourself, your boundaries and limits, and practicing self-care is hard but important. Also finding a support network, an activity that you’re really into, or creating an intentional community at college — especially urban or really large schools — is so fundamental for being grounded and successful, for me at least.

As an NYU grad, I 100% agree. Now a really fun question: Do you have any celeb crushes?

Haha, yes obviously. Carmen from The L Word and Johnny Depp, but only as a pirate. 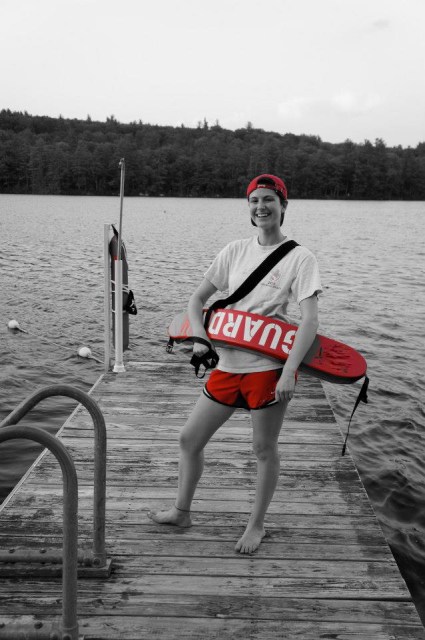 Maddy will save you!

Awesome. How did you discover Autostraddle?

A friend told me about it and it’s been my homepage ever since.

If you could be granted three wishes, what would they be?

Woah okay ummm…one, I would like everyone to wake up one morning and have internalized anti racist, anti colonialist, anti sexist, anti homophobic thinking and behaving. Two, I would like a liveable tree-house on a beach. And three, I really want a dog.

What kind of dog?

I love pitbulls. They get such a bad rap. It’s very sad. But I won’t have the space [for a pitbull] for a long time, so maybe in the meantime a Frenchie. Or a puggle.

Oh my god puggles. My girlfriend wants a puggle so badly.

Get one! I’ll babysit whenever you want!

Hm, tempting… okay one final question: Do you have anything else you want to share with the Autostraddle community?

Well my go to is “you do you” but they already have that. But maybe an addition to that, you do you but also take care of each other.