Episode 8: What Are Little Girls Made Of? (Android Revolution!)

So I’ve had some time to recover from the ragefest that was Episode 7. Sure, I know this series was filmed in the 1960’s, but last episode’s issues have me on edge. My partner loaded the fridge with some emergency booze just in case things get scary during this next viewing. Episode 8’s title has me a bit worried: “What are Little Girls Made Of?” Luckily, we already know the answer to that question, thanks to the tireless efforts of researchers in Townsville during the 20th century:

If you’d like to watch along, you can! And if things get rage-inducing, well, we’re in this together.

The episode opens up on Nurse Christine Chapel, who is hitching a ride with the Enterprise in a mission to save her long-lost fiancé. Turns out she ditched a promising career in bio-research to save her man, Dr. Roger Korby, who went missing five years ago during a research expedition on Exo-III.

I gotta say, this is a refreshingly feminist shift from this annoying TV trope of the lady who waits forever for her lost sailor/adventurer/explorer dude. At least Nurse Chapel is going out to save him! 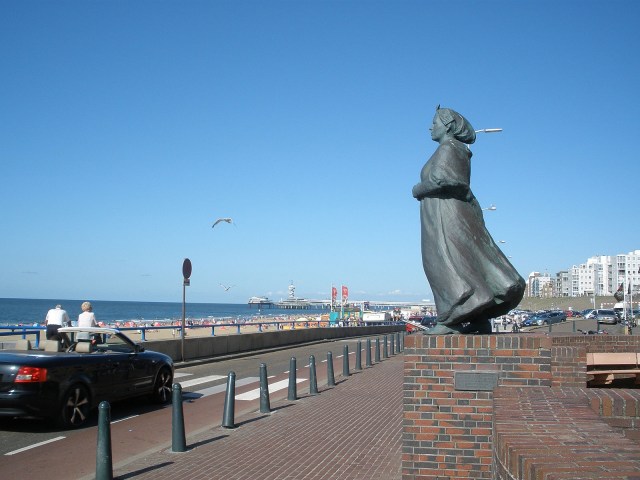 I waited here so long, that I turned to stone! via Wikimedia Commons

Unfortunately, it doesn’t seem likely that Dr. Korby is still alive. I mean, they’ve sent two rescue teams after him. Spock is silent when Kirk asks if he could still be alive. The Vulcan gives the crew a rundown of the planet with his PowerPoint slideshow. Guess the planet’s surface temperatures drop all the way down to -100 degrees. 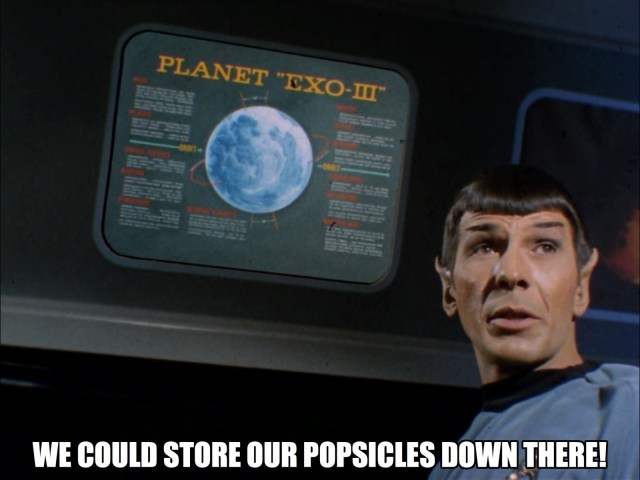 This tidbit gave me a knee-jerk reaction. Better not send Sulu there, because the crew will totally let him freeze, only to thaw him out later! Still a little sore from episode 6.

Uhura scours the emergency frequencies and gets nothing. Right before they declare it a lost cause, Dr. Korby’s voice pops up on the radio. And he makes a strange request—he wants Captain Kirk to beam down alone, because “we’ve made discoveries of such a nature that we may require an extraordinary decision from you.” Hmmmm, that doesn’t sound safe at all! Wanna bet that this is a trap, where Kirk will face the next Big Bad? 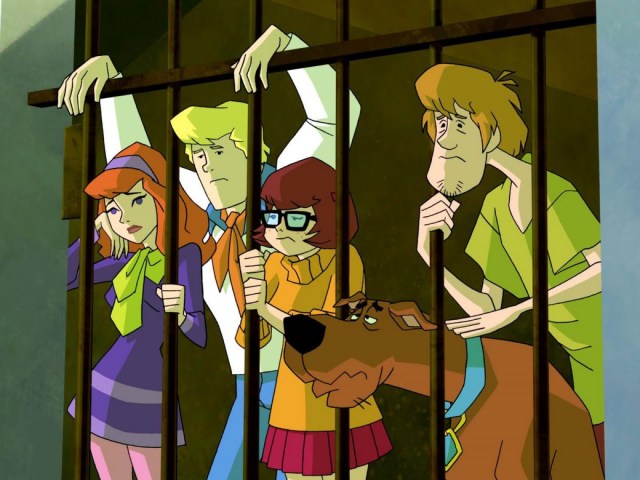 Gee gang, why do we keep walking into these traps? Source: Everyday is Like Wednesday

Spock rushes to the Captain’s side with worry. It’s hella cute. 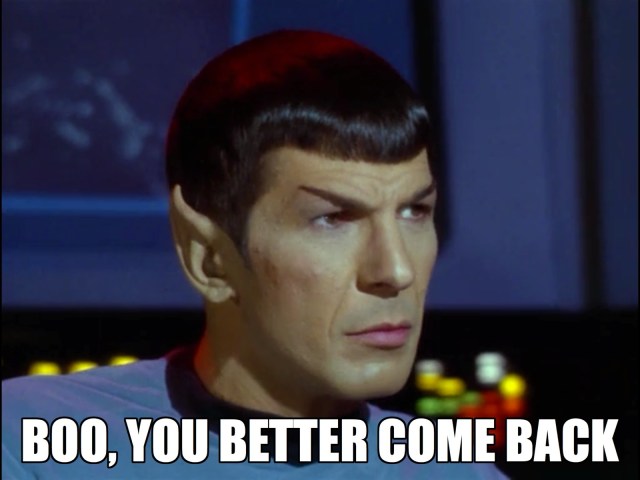 But what about Nurse Chapel?! She says “Hi” to her now-suspect fiancé. He is shocked to hear her over the radio, and insists that she beams down too.

Kirk and Chapel zap down into the planet’s icy caverns (where Dr. Korby took refuge with his scientific team). Without cold weather gear, WTF? My Hawaii blood couldn’t handle this—I’d be bundled up in a bajillion layers.

Dr. Korby is nowhere to be seen. Kirk decides to play it smart and asks Spock to beam down two security guards. They creep around the cave, and I gotta admit, I was on the edge of my seat waiting for something to pop out. Suddenly…. 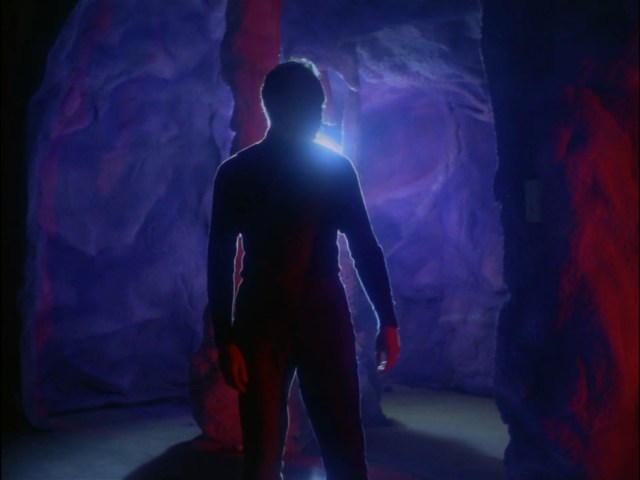 The space-cave version of SLENDERMAN appears.

Turns out it’s just Dr. Brown, Kolby’s lab assistant, who’s standing in front of a really bright light! Phew! After some nervous laughter, they hear someone scream behind them. One of the security guards just fell down into a bottomless cave chasm. While Kirk and Chapel are distracted, this Purple Wizard guy sneaks past them. This episode is just getting more and more like Scooby Doo! 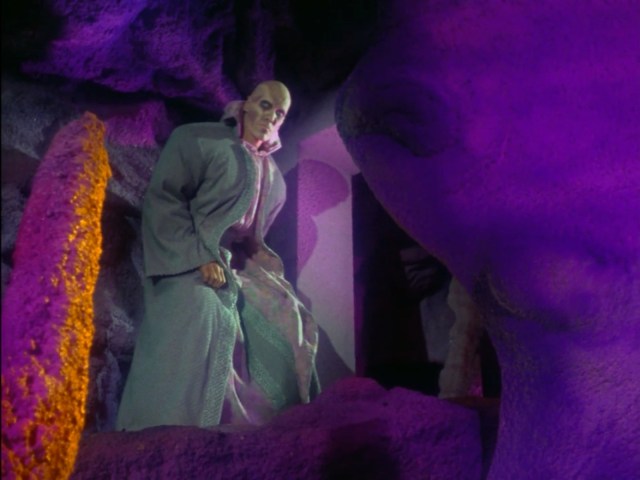 And then Shaggy unmasks him and Velma says “Gee wiz! It’s Big Bob Oakley, the actor! But why did you want to find the Franken Jewels in the Franken Castle?”

Purple Wizard guy slips over to the second security guard and kills him. Looks like they’re in deep shit and will need the Mystery Machine soon. Fingers crossed that Spock will save the day!

The gang meets up with the long-lost Kolby in his study. He and Chapel have a quick makeout sesh before he introduces himself to Kirk. But then this lady appears! 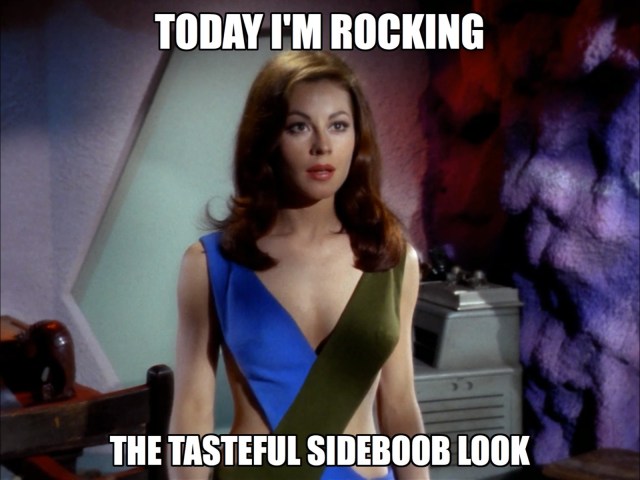 Dr. Brown is also rocking the same uniform, but they cover him up with a black shirt.

Of course Chapel glares daggers at Andrea, who turns out to be another “research assistant” who’s been stuck in this cave for half a decade. Awwwwkward.

Things get ugly fast when Kirk attempts to communicate with his security detail, only to get no response. He panics and starts to call the Enterprise, but then Brown pulls a phaser on him! 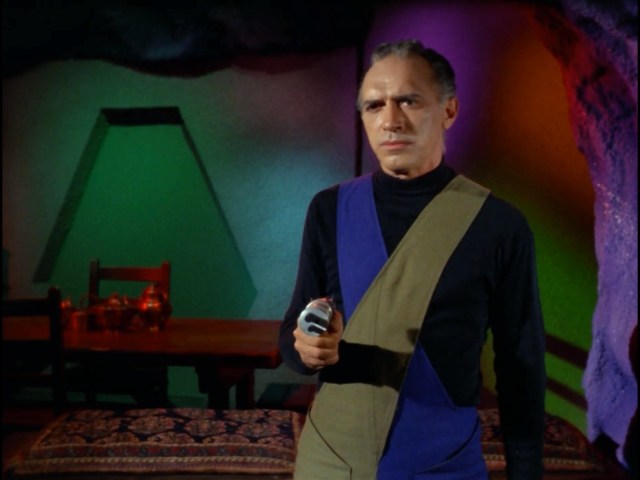 Kirk uses his space kung fu to wrestle a phaser away from Andrea. He holds her hostage for a split second, before tumbling behind a table for cover. Go Space Kung Fu Kirk! 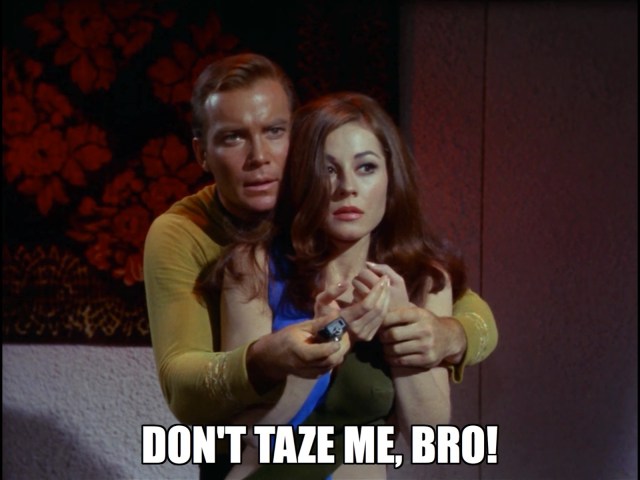 Kirk zaps Brown with the phaser. Suddenly, Purple Wizard Dude bursts into the room and picks Kirk up like a baby, which is pretty impressive. Chapel screams and points at Brown’s body, because oh em gee, he’s a machine! 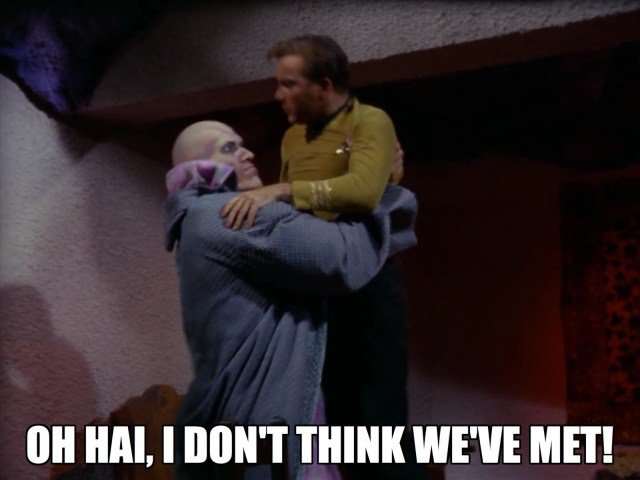 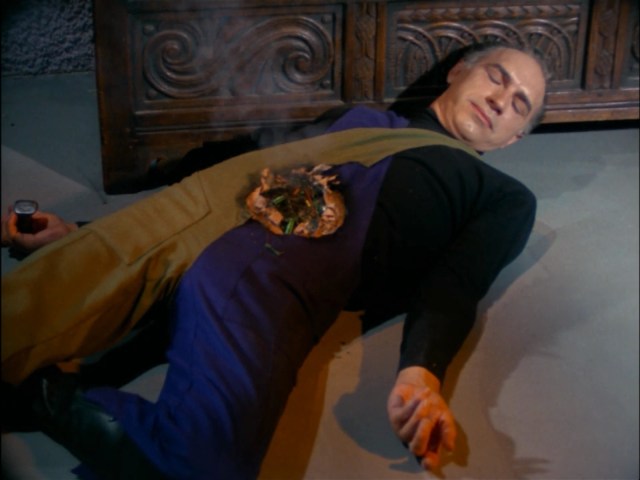 So sad, he didn’t get even get a Blade Runner style “Tears in the Rain” moment.

Turns out that Purple Wizard Guy is named “Ruk,” and he’s an android left behind by his masters, “The Old Ones,” who built an underground society eons ago. He’s got some attitude, claiming that he’s “more complex than Brown. Much superior!”

Ruk’s got this unique talent of being able to impersonate anyone, including Captain Kirk. Ruk grabs the communicator and tells Spock that they’re all okay, and that the landing party is making preparations to pack up Korby’s research. Spock, being ever-so-cautious, asks “Captain, are you all right? You sound tired.” 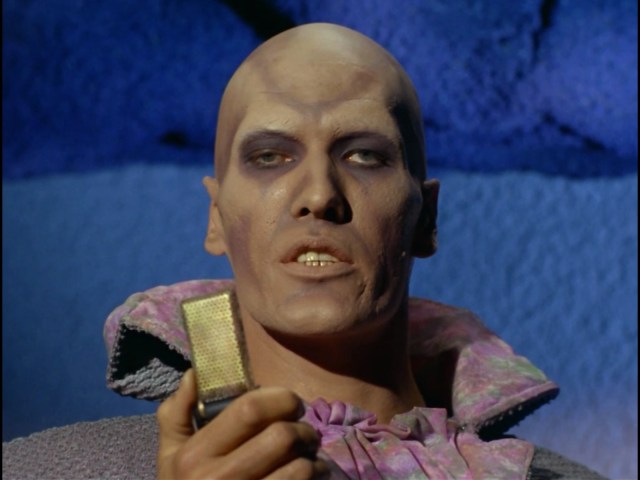 Also, that is most definitely a cheese grater. #propsmasterwin

Kirk tries to convince Ruk to let him go. “The whole galaxy knows who you are and what you stand for. That’s why all this makes no sense!” But Korby wants Kirk to stay for a day and see what they’ve discovered. Kirk will only do so with one caveat – that Ruk obeys any command from Christine. The loaded gun! Maybe she can help Kirk escape! 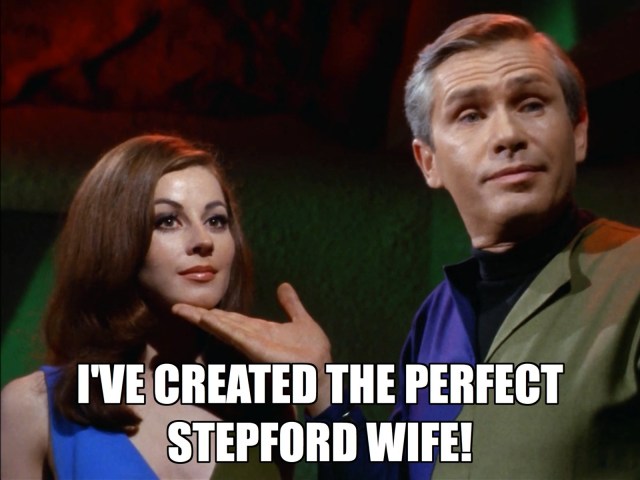 Korby escalates his creepiness by revealing that Andrea is also an android, showing her off like a product on QVC. “The flesh has warmth. There’s even a pulse. Physical sensation.” His fiancée, Nurse Chapel snorts and calls Andrea a “mechanical geisha.” I feel ya girl, Korby is one sketchy dude.

Guess Korby feels bad, because he insists that there’s no emotional bond with Andrea. She “simply responds to orders. A thing. Not a woman.” *shudders* To demonstrate, he has Andrea kiss and slap Kirk in a bizarre display of forced sexual harassment. Yikes! 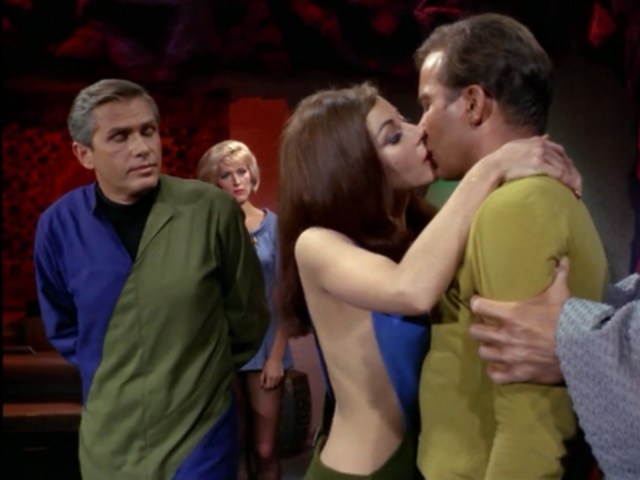 See honey, haven’t I convinced you that she’s NOT a sexbot?

Dr. Kolby decides that they’re going to make Kirk-shaped dolls now, and straps the Captain onto his Android Clone Machine ™. 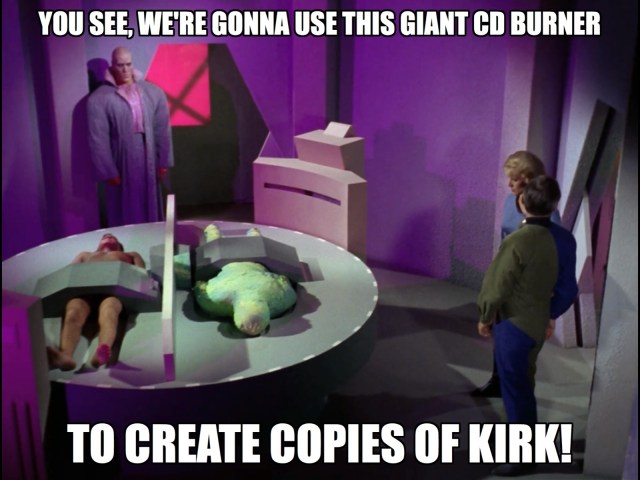 The cloning is successful, and now we’re in for Doppelgänger Kirk, round two! Recycle, reduce, reuse (your plots)!

Andrea sets the dining room table, because jeez, building android clones is hard work! Andrea reveals that she is now programmed to please Christine too. Let’s all giggle now at the lesbian subtext. 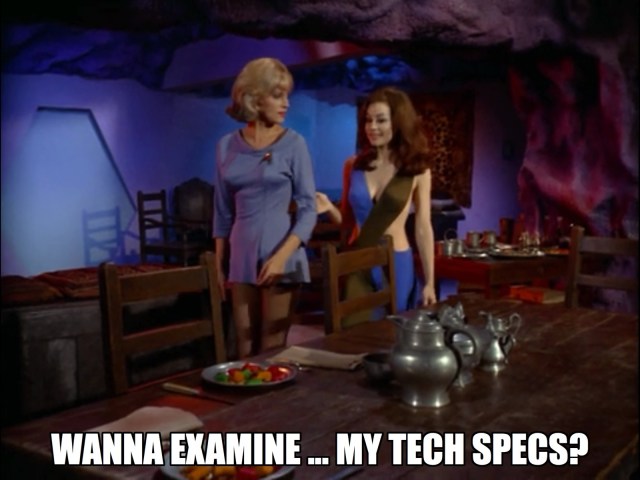 They all sit down to the most awkward dinner in the universe. Kirk grills his Android clone and learns that he’s got the same memories. While they chat, Kirk fiddles with the ropes tying him down to the chair. I’m sure he scored the knot badge in Starfleet Scouts.

Kirk escapes into the caves, and Ruk pursues! Good thing this cave is full of GIANT DICK-SHAPED STALACTITES that can be used as weapons! 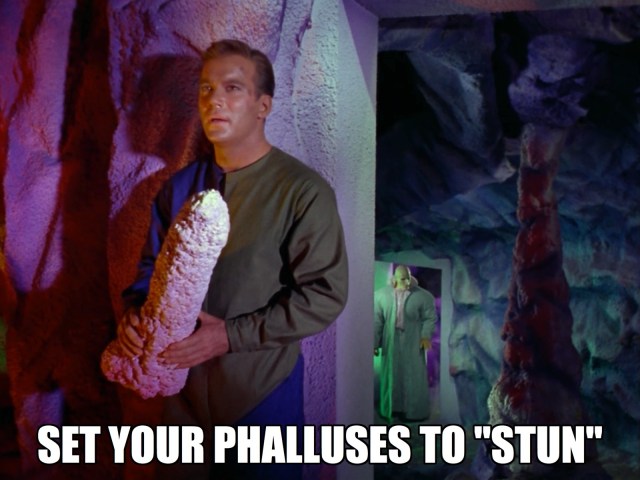 Android Kirk beams up to the Enterprise, and Spock is surprised, noting that they weren’t expecting the Captain back so soon. And how does Android Kirk respond? 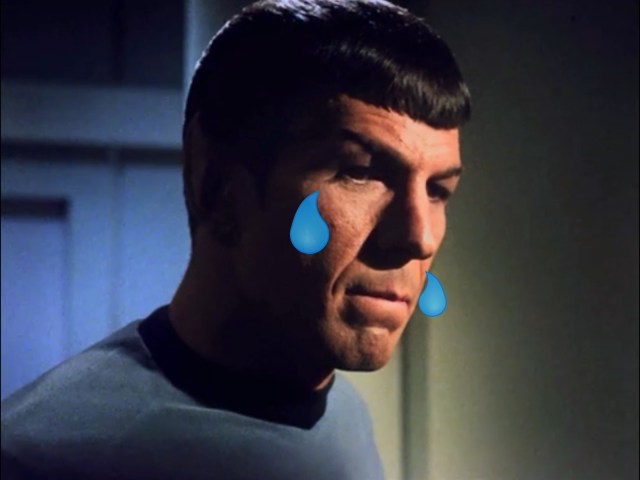 Poor Spock, right in the feels!

Of course, Spock gets suspicious and arranges to meet with a security team once Kirk leaves.

Kirk tries to convince his captors to release him. First he smooches Andrea, which seems to just confuse her. Then he tries to instigate a robot revolution with Ruk. Kirk asks questions about the Old Ones, jarring Ruk’s memory banks. “The ones who made us, they grew fearful of us. They began to turn us off!” Ruk exclaims. 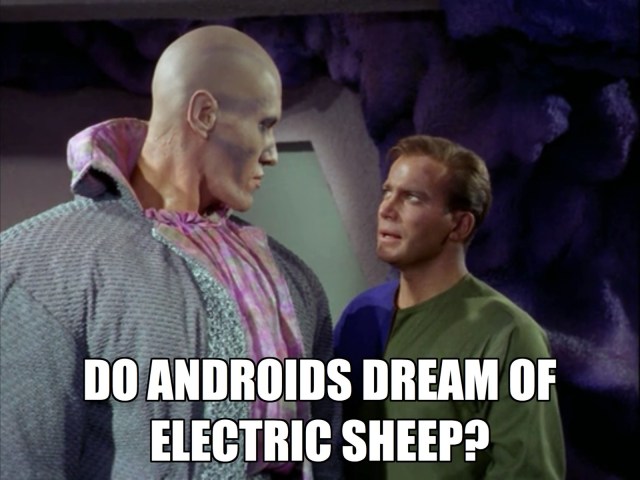 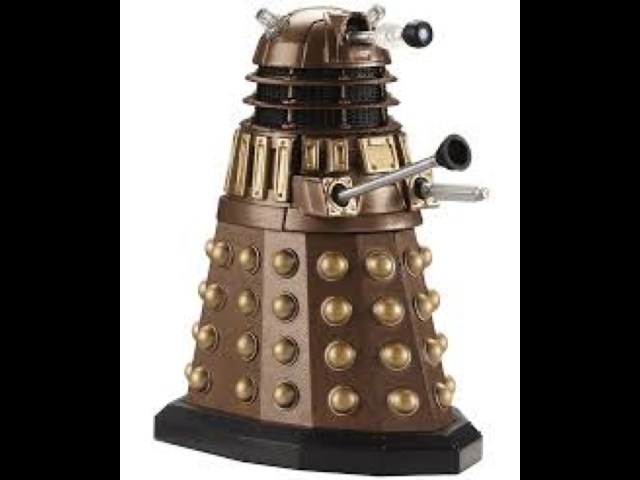 Korby overhears some of this revolutionary talk and vaporizes Ruk with a phaser. A this point, I’m wondering if he’s an android himself! Kirk attacks him, but is thrown across the room. Aaaaand yep! Korby’s a machine! He converted himself before he could freeze to death on the planet. 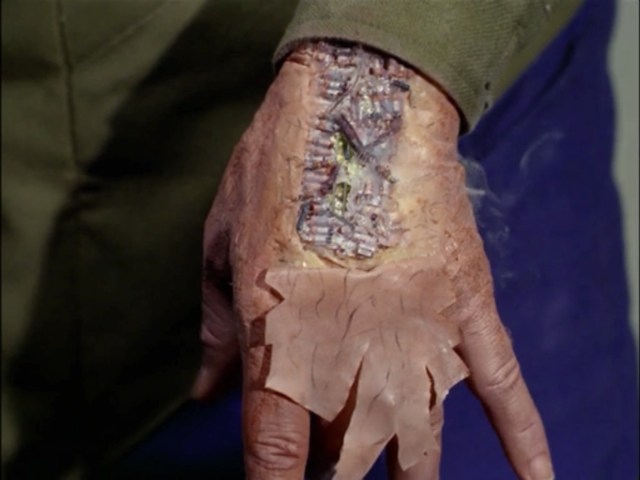 Turns out Kirk’s kiss caused a malfunction in Andrea’s circuits. She approaches Android Kirk and demands a kiss. He refuses, because it’s “illogical.” So she vaporizes Android Kirk with a phaser. Dang, talk about an overreaction!

Andrea walks in on Korby, who’s trying to convince Kirk and Nurse Chapel that he’s created the perfect species. When Andrea mentions love, Korby shakes his head. “You cannot love. You’re not human.” At this point he must realize that he’s made a big boo-boo, and that they aren’t the perfect species. So he embraces Andrea and pulls the trigger to her phaser, committing robot suicide. 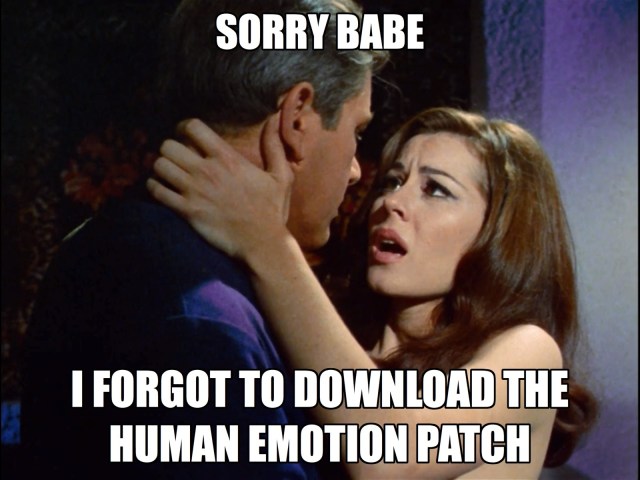 :( Welp, that was depressing.

Tears in the Rain, indeed.

Spock bursts into the room, demanding, “Where is Dr. Korby?” And Kirk tells him, “Dr. Korby was never here.”

Nurse Chapel is heartbroken, but she decides to stay on the Enterprise as a crew member, thanking the Captain for respecting her decision. Hooray, hopefully we’ll get to see more positive female character representations. (P.S. I’m really hoping for more Uhura storylines!)

As they leave Exo-III, Spock quips, “Frankly, I was rather dismayed by your use of the term ‘half-breed.'” Heh, we are too Spock. Also disappointed that the title was about little girls and referencing a full grown android woman.

Let’s take a moment of silence for those poor, sad androids.