You may have seen our Fall 2013 Makeup Trends (for Brown Folk). Here is the next installment, featuring four scrumptious holiday looks specifically designed for darker skin. 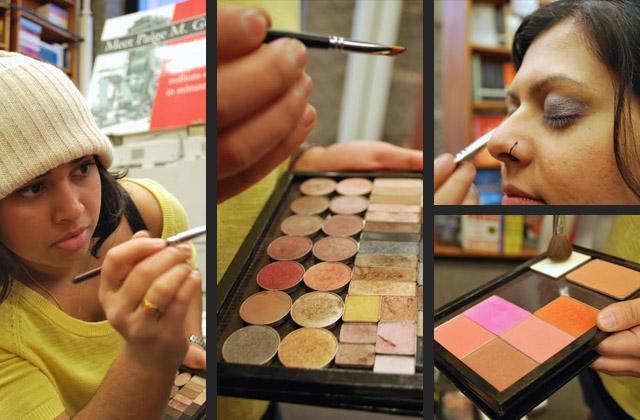 Emerald was Pantone’s Color of the Year for 2013 and what a colorful year it was! Greens look amazing on brown skin and eyes, so say goodbye to 2013 in style with an ode to emerald in a fierce winged cat eye. 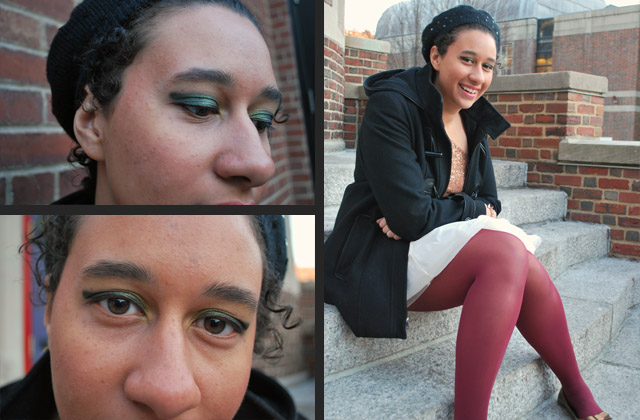 To get Brianna’s look, draw out a wing shape using Urban Decay’s 24/7 Glide On Eye Pencil in Zero black liner. The liner helps to give depth to the color, and give it something to stick to. On top of the black, layer a medium-green all over the eye. I used Urban Decay shadow in Mildew. Blend a darker green shadow into the outer corner and crease, a black into the very outer part of the wing and a light gold into the inner corners.

Pair these deep pigmented eyes with a blend of coral and brown blushes. Brianna is wearing NARS blush in Torrid and Lovejoy, but you can use any combination of somewhat neutral brown and coral.  Finish off this fun look with a light pink lip balm such as Tarte Lipsurgence Lip Tint in Enchanted. 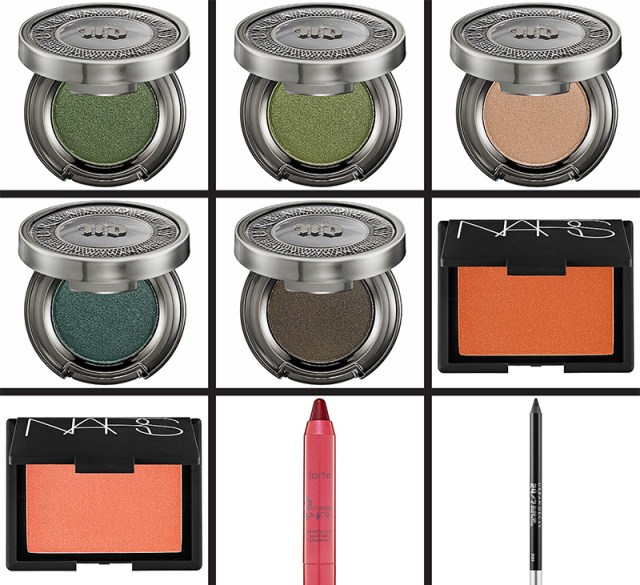 If you’re searching for a look that oozes warmth, look no further than the colors of your favorite hot seasonal beverage! This is the perfect time of year to show off your eyes layered in copper and bronze metallics paired with freshly bitten cinnamon lips. 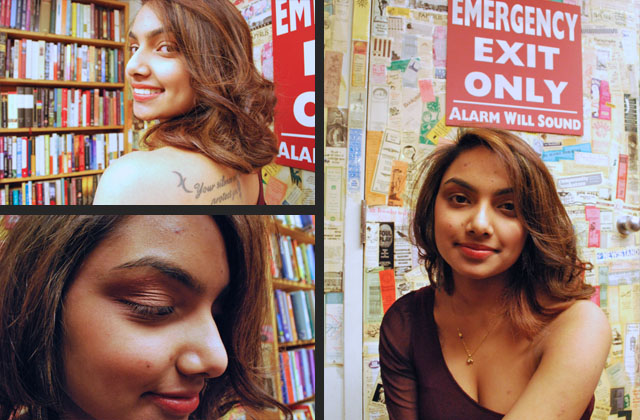 If you want Sasanka’s eyes, start with gold shadow on the inner part of the lid, with copper shadow on top. This is a great opportunity to utilize an already paired shadow duo such as NARS shadow duo in Isolde. Highlight the inner corners with a light gold shadow and blend a darker copper shadow into the outer corners and crease. I used Urban Decay shadow in Half Baked and NARS shadow in California.

I contoured Sasanka’s cheekbones with the matte bronzer NARS bronzer in Irrésistiblement and highlighted with the golden NARS blush in Albatross. I finished off the look with a dusting of deep purple NARS blush in Seduction.

For her cinnamon lips, I used two coats of the shimmery, orange-based red NARS Pure Matte lipstick in Moscow. 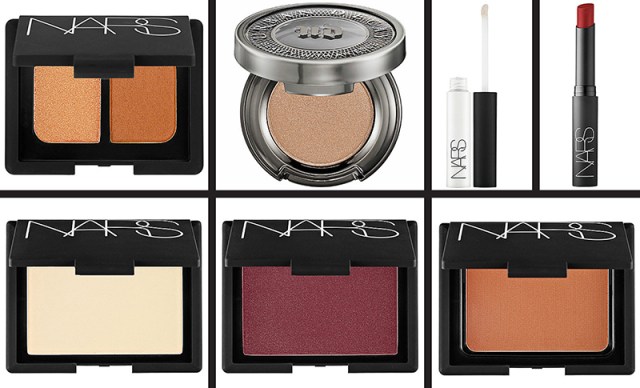 Metallic purple eyes are just as popular this season as they were last season, but now we’ve got a new twist!. The holiday iteration brings us a grayer, more metallic purple. Let’s call it grayple. Purplay? 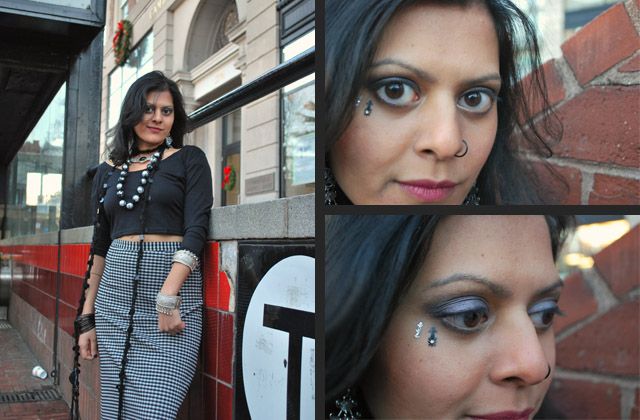 This is a smoldering look that works on any skin tone. You start with a layer of purple liner or shadow pencil all over the lid. Urban Decay’s 24/7 Shadow Pencil in Delinquent is a good option. Don’t worry if it looks scary. We’re gonna layer, because that’s what you do in the winter. Think of the purple as the cozy fleece-lined tights you wear under your jeans.

To get Sarah’s look, I layered grays of varying intensity, building from lightest at the inner corner of the eye to darkest at the outer corners and in the crease. I used Urban Decay shadow in Mushroom, Gunmetal and Asphalt from the Smoked Palette. On the very inner corners, I used the shimmery vanilla Urban Decay shadow in Virgin as a highlight. To get the perfect smoky look, instead of liner, use a dark matte black to line the eye, such as my ever favorite Urban Decay shadow in Blackout. Blend all the colors together using a fluffy brush. Finally, use an angled brush to push some of the medium and dark gray shadows under the lower lashes.

Once you have the eyes completed, pull the whole look together with a dark burgundy blush with a slight shimmer such as NARS blush in Seduction, and a berry lipstick such as NARS lipstick in Scarlet Empress.

Winter is all about smoky eyes, but for darker-skinned folk, it can be harder to pull off the heavy gray smokey eye without looking washed out or tired. Solution: color. Big, bold, beautiful color. I used cobalt, but any color will do. Purple, green, orange, brown, red, and if you’re not feeling very adventurous, taupe or bronze. 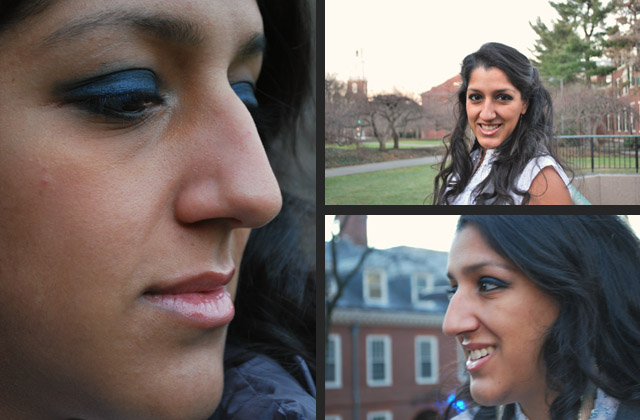 To finish off the look and balance out the eyes, swipe on a deep wintery blush, such as NARS blush in Seduction, and a coat of  Smashbox Lip Enhancing Gloss in Illume or another shimmery gloss. 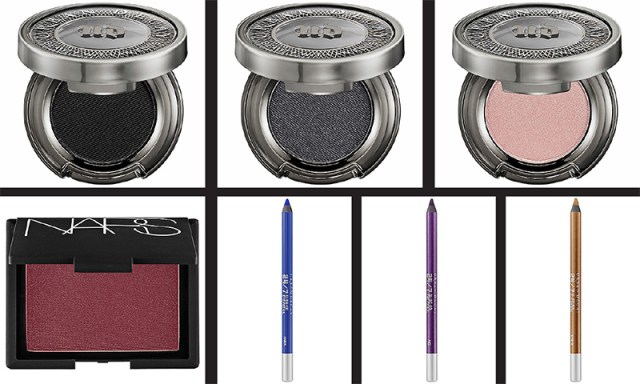 I hope you have fun rocking these looks at your holiday functions! You’re sure to grab enough attention to keep you warm all winter long.