It felt like church. We stood riveted, reverent, in a dingy concrete room and watched Julien Baker play. The only sounds besides her music were a few kids singing along under their bated breath and the occasional rumble of a passing train.

I’ve watched a lot of people play guitar in a lot of concrete rooms all over Texas. But I had never seen this before: A young queer woman from the South singing about depression, substance abuse and a God that seems something like the one I try to believe in. She stood on the stage at Rubber Gloves in Denton in a camo tee shirt with a giant AFI patch stitched on the front that she inherited from two friends who had worn it their whole respective tours. She put nothing but a Fender Telecaster and a marvelous pedal kit between her and the whole world. 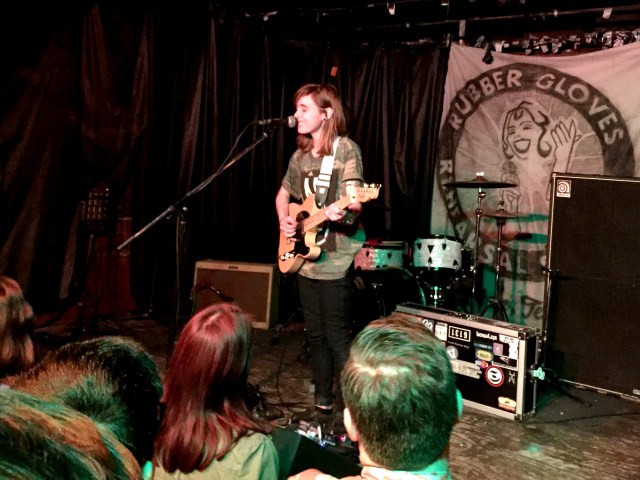 Baker played one devastating song after another, but we all understood that sad songs are more than what they appear.

Julien Baker’s artistry is about making the best out of nothing — making light out of the darkest times, carving faith out of doubt, building connections with strangers. Her debut album Sprained Ankle came about because she missed her Forrister bandmates back in Memphis and needed to create something.

The outcome is nine songs that tell the mostly true story of a weird, messed up kid who hasn’t given up. In a phone interview, she cites Rilke: “Perhaps all the dragons in our lives are princesses who are only waiting to see us act, just once, with beauty and courage. Perhaps everything that frightens us is, in its deepest essence, something helpless that wants our love.”

“Shitty things happened last year and I had to reorganize my life,” Baker said. “And that was the best thing that could have happened.”

She takes inspiration from kids on Tumblr and at shows who tell her that her lyrics about faith and her honesty about her sexuality give them something to relate to. She just has a thing, an inexplicable sparkle that makes her easy to connect to.

“I told my manager, don’t ever give me quantitative data,” she said. “I don’t look at numbers of followers, Soundcloud streams or sales. I hardly even look at the spreadsheets for the tour except to make sure I can fairly compensate the people I need to pay. It’s qualitative data when I get a Facebook message saying ‘your album helped me through a rough time.’”

After her set at Rubber Gloves, she perched on the edge of the stage wrapping up guitar cables while college kids asked her about her plans for South By Southwest, which she would play for the first time the following weekend. This is the surest sign of an up-and-comer — Baker has enough fans that the engagement takes a lot of energy and time, but she still does her own tech. She’s hasn’t totally come to terms with the last year, when she went from an English student at a Tennessee university with nine great songs self-released on Bandcamp to a “phenom,” “artist to watch” and “breakout star” with a successful debut on 6131 records and a growing following fueled by write ups in every major indie music publication in the country, to say nothing of NPR and the New York Times.

But far more than stunned, she’s grateful for the opportunity to reach people with her work. She feared at first that her family, teachers and bandmates would discourage her from pursuing life as a solo musician. Instead, she was met with universal encouragement.

“Music seemed like a pipe dream and now suddenly it’s not, and it makes me motivated to throw everything I have toward that goal. There are six billion people on this earth and I don’t know why I get a microphone. All I can do is use it for the best ends I can.”

She’s put school on the backburner for at least the rest of the year so she can tour and record new music. She grew up on punk, coming into her own at a sober punk space in Memphis called Smith7 and always knowing she had to shred harder than any of the boys to be respected. At age 20, she has crafted a guitar style that somehow summons both Elliott Smith and Bikini Kill in its earnestness and heartbreak. It’s not that strange a combo, really. I’ve said it before and I’ll say it again: Crying is so punk.

Amidst touring, Baker is working on new music and trying not to get ahead of herself in the face of something like fame. About her longterm goals, Baker keeps it simple: “I have no personal aspirations — not that I’m ungrateful.”

In fact, unending gratitude fueled by her faith seems to be the most constant element of her life. She calls her socially engaged and inclusive church in Murfreesboro the “Island of Misfit Queers” and downloads sermons from different church leaders to listen to on the road. Even as most things are in flux, her faith remains her cornerstone, on and off tour. Her queer identity is not a flipside of that faith; rather, the two are seamlessly integrated. She tried for a while to date boys, but eventually came to a realization that many people in our community have: “I can’t do this or I’ll die.”

“If I’m going to take it as a postulate that a higher power exists, do I think He hates me? I started reading tons of books, I read Wesley and Kierkegaard because I was hungry for more knowledge about the nature of Christ and to know if the thing that made me hates me. The only thing God has to say to man is that He loves us.”

Over time, she discerned that her faith and sexuality weren’t so contradictory after all. She sees Tennessee and the South as home, in spite of and perhaps because of all its detractors. The South needs kind people to make loud noises on its behalf, so don’t expect Baker to move to Seattle or Brooklyn anytime soon. All these elements of her life —queerness, faith, Southern roots and music — look like part of a larger plan. The people she is able to reach with her music now have changed the way she views her past trauma.

“I used to pray that I would wake up straight so God would love me,” Baker said. “But now I hear from these kids who are Christian and queer and I realize that’s why I couldn’t have it easy. There’s something beyond the suffering of feeling alienated. It’s like, I have a chance to be the physical embodiment of love to other people, and that’s your only responsibility as a human.”

Baker played some new songs at Rubber Gloves, and in one she sang about “humiliating grace.” I think it’s that feeling that we can’t conceivably deserve what we have so it’s hard to know what to do when we get it.

The answer, it seems, is to sing loud and give love.