Welcome to Soggy Bottoms, where, lacking a tent in the British countryside, Autostraddle writers attempt to bake things inspired by The Great British Bake Off in their own homes, to varying degrees of success. This month, Maddie and Audrey made rough puff pastry.

About 90 percent of the foods they make on the Bake Off are random but extremely specific European desserts that I’ve never heard of. It’s exciting to peer into a world of carbs beyond cake, pie and things from a Pillsbury can. So when I went to visit Maddie in Philadelphia, we decided to take on one of the most consistently challenging recipes on the show: Pastry. Y’all, I’m not even sure I entirely knew what constituted a pastry until now. But I can tell you: It’s mostly butter and sweat.

Y’all, this is Maddie writing now, and I would just like to add that usually, when I’m cooking or baking, I work alone. I am not… the best… at sharing that space. Throughout this process, Audrey was very patient with me and my propensity to be a “kitchen top.”

So, minus a few moments of panic (the salt, the salt!) we came through this challenge with our selves and our friendship unscathed. But did the recipe work? Read on to find out and learn to make your own.

Make sure your three sticks of butter are cold, then use a sharp knife to cut the butter into small (roughly ⅓ inch) cubes.

Sift the flour and butter.

Put the cubes in a pile on the cutting board, and dump all the flour on top of the butter.
Use the pastry blender to cut the butter into the flour, until you have a relatively uniform crumbly mixture of flour and butter.

Arrange the flour/butter mixture into a mound of sorts with a little divot, like a volcano with a crater at the very top. Add about a third of the cold water and mix it into the dough. Repeat the water-adding process twice more. The dough should be moist and roughly held together; however, it should not look anything like your mental image of puff pastry dough yet.

Audrey used the pastry blender (also called a pastry cutter) to chop the pile of flour, butter and water into a mass. This process feels endless and useless at first, but with patience you will achieve greatness.

It’s time for your rolling pin! Or your wine bottle. Roll out the dough into a flat sheet. It won’t look smooth yet! That’s ok.

Once you have a flat sheet (it’ll still be piecey, but you’ve just gotta trust the dough that it’s gonna work out), fold it in thirds like you would if you were folding a letter. 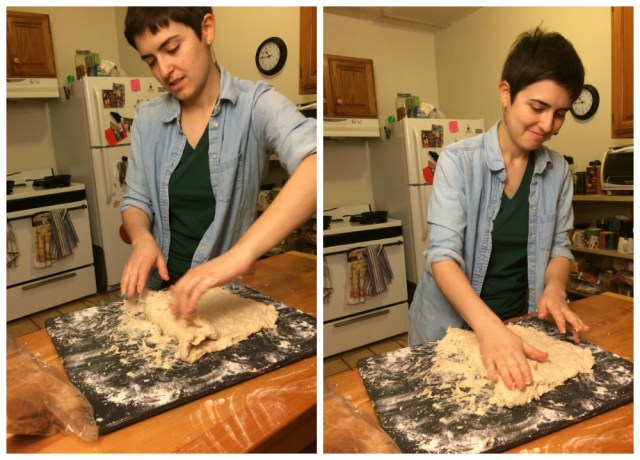 We were not sure about the first rounds of folding. It didn’t seem like this sticky pile would ever look like food. But Maddie kept up her spirits about it. 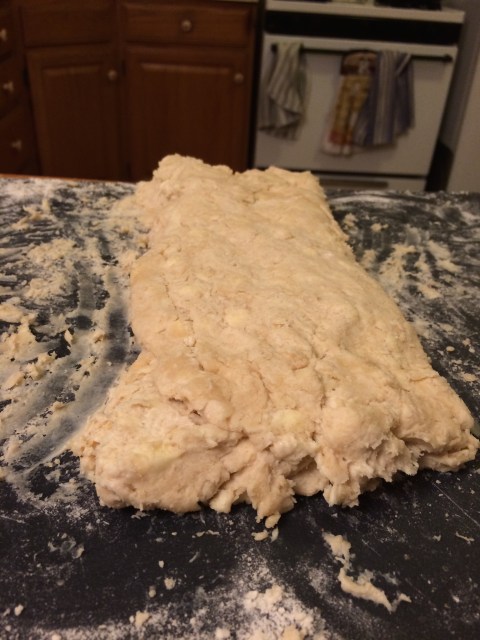 This is what we got after the first turn.

Then use your rolling pin to flatten it out again, and then fold it like a letter again.

Repeat those steps two or three times (each rotation is called, in baking terminology, a “turn”). 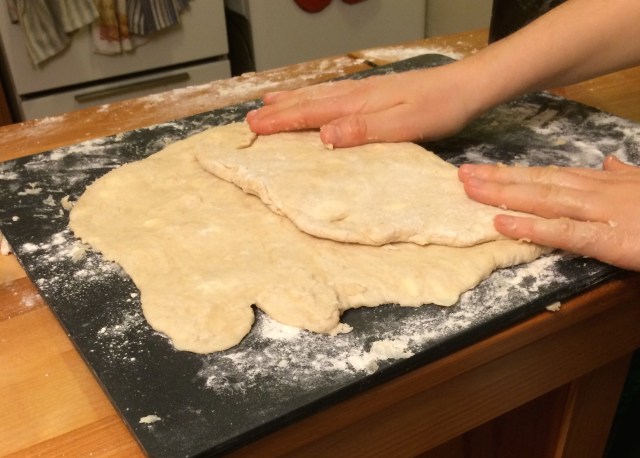 After the second turn! The flour and butter are looking more blended, and it’s getting easier to fold. Sprinkling the cutting board with flour definitely helped.

This is the process called “lamination” – it’s how the layers develop. If you were making real puff pastry, you’d be laminating a literal sheet of butter between sheets of dough, but this is ROUGH PUFF (ruff puff? rough pough?) and it’s a lot less precise and therefore it’s easier for the first-timer. Like you. Like us.

By the second or third turn, your dough should finally look like the pastry dough you’ve been imagining: a smooth and flexible sheet that doesn’t stick to anything or itself.

Maddie’s friend made us very strong cocktails at dinner so Audrey was extra pumped about this dough.

Fold it again and wrap it in saran wrap; then chill it in the fridge for half an hour. Then give it two or three more turns. After this, chill it for at least another half hour. You can use it right after the half hour, or leave it for up to three days (we left it overnight).

If you leave it for more than the half hour, you might want to let it soften up out of the fridge for a few minutes – I tried to unfold it immediately, but it broke into pieces, so I decided to leave it folded and roll it out again. That worked fine, too.

NOW YOU HAVE A ROUGH PUFF PASTRY DOUGH! AMAZING! 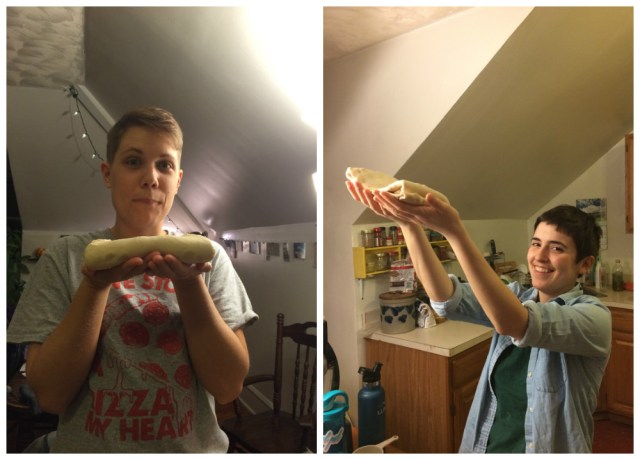 Please do not forget the very important step of posing with your dough.

But what are you going to do with it?

We went the savory pastry route, using this recipe as inspiration. We caramelized some thinly sliced onions and peppers and let some goat cheese get nice and soft. 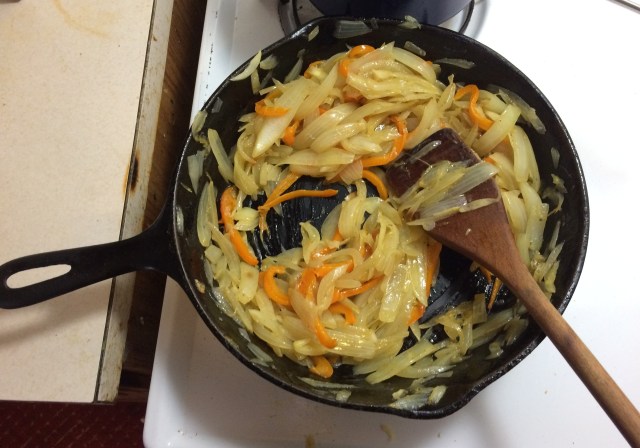 Caramelizing onions always takes longer than you think it should, but I promise it’s worth it.

Then we cut our pastry into eight pieces (this whole “equal pieces” thing is a combination of baking technique and geometry I have yet to master and that continues to present baking challenges to me).

We scored edges into them using a butter knife. 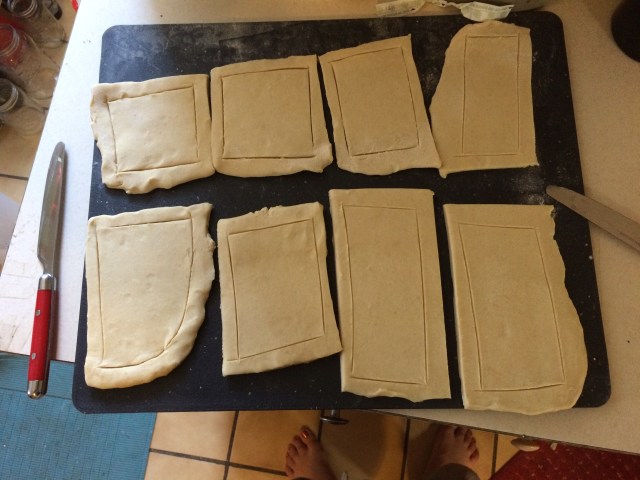 This is after we cut off the wonkiest edges.

Then we pre-baked the pastry at 350 degrees for about 10 minutes, and then the idea was that the middle parts would “push in” and the outer edges would puff up more to make a crust…

That concept kind of worked. At any rate, we then loaded the pastries up with the onions and peppers and dolloped goat cheese on top, and then we baked them for another 20-30 minutes. 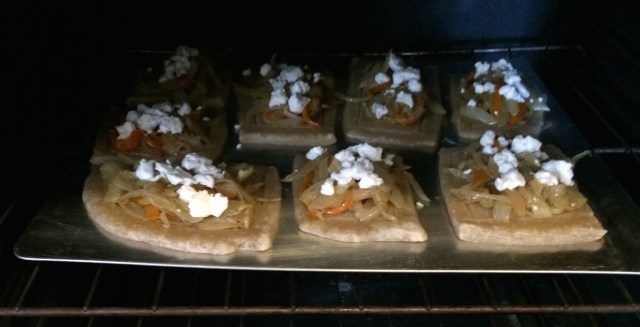 The little pastries that could~

When they came out, it was the moment of truth: WOULD THE BOTTOM BE SOGGY? That is, after all, the only question that matters. It’s the “real challenge” of this whole process.

The verdict was…… NOT REALLY!

Overall, the bottoms were mostly crisp! They were a littttle greasy (remember how there are 3 sticks of butter in this recipe?), but the bottoms themselves were not overly soggy. The top was golden, and the dough had developed layers and puffed up! 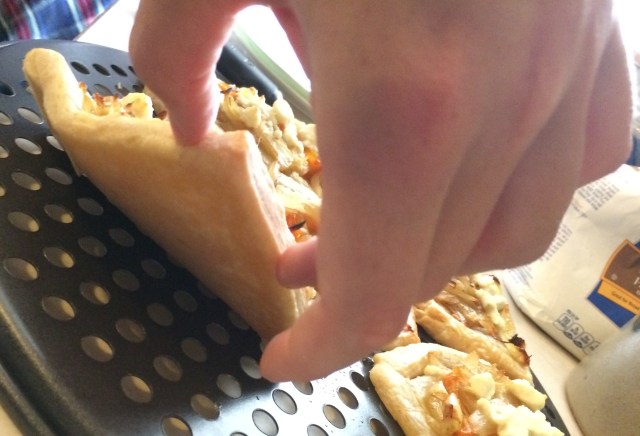 Look at that crispy bottom! That’s the crispiest bottom that ever bottomed.

The inside was another story. Imagine Paul Hollywood saying, “it’s not cooked,” and you have a pretty accurate representation of what we were dealing with. Overall, I think they could have pre-baked longer, because the wet ingredients on top stopped it from being able to cook through entirely.

For a first attempt at rough puff pastry, though, I’d say we did ok. Follow this recipe at home and see what you come up with! Audrey ate one at my house and then another one on the plane and they said it held up as well as you’d expect a pastry in a ziploc bag in a backpack. My roommates inhaled them. I ate two despite severely overestimating how much butter my lactose intolerant stomach can stomach. So if those aren’t endorsements for a solid first swing at rough puff pastry… I dare you to do better.

…no but really try to make them and come report back on how it went. 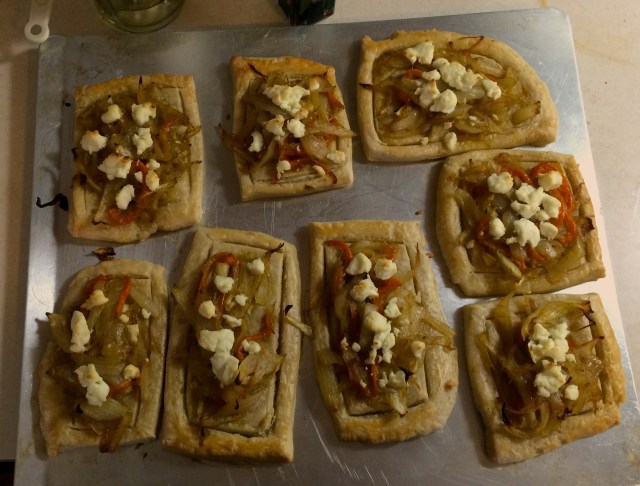