In exactly one year, I’ll be sitting on my couch wrapped in a Canadian flag, screaming at a television cuddling my Quatchi(s). If my previous Olympics experiences have taught me anything, it’s that as soon as that cauldron lights up, the world becomes one massive smorgasboard of facepaint, alcohol, flag inspired outfits and vuvuzuelas. Sochi is set to rack up a fifty billion dollar tab, making it the costliest Olympics to date. Will there be giant blue bouncing balls this time? Or supermodels in snowglobes? Only time will tell. But unlike other host countries that did their social spring cleaning before the world’s attention turned to them, Russia is taking a different approach. They’re pulling their skeletons out of the closets and stuffing their citizens deep inside.

Russia is brazenly pushing through its gay propaganda law in the face of mounting international criticism. The bill is supposed to “protect” impressionable children from the homosexuality by banning and severely fining any groups that are depraved enough to show that LGBT people exist. A similar bill already passed in St. Petersburg and now is now poised to go country-wide. In its first reading last month, the draft law passed 388-1. Yes, one. Sergei Kuzin, the deputy behind that lone vote asks a simple question, “Do you seriously think that you can foster homosexuality via propaganda?” Elena Mizulina, the chair of the Duma’s family issues committee apparently thinks so. She’s quoted as saying that”the spread of gay propaganda among minors violates their rights. Russian society is more conservative so the passing of this law is justified.” Even though the bill still has to make it through two more readings before it gets Putin’s signature, this Russian society has already proven itself to be an inhospitable host. 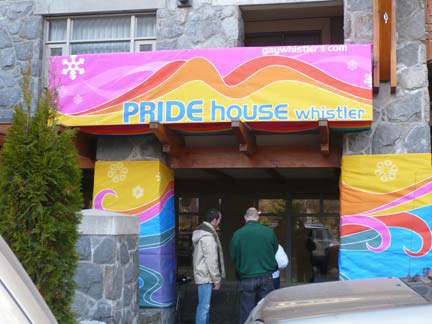 For the past two Olympics and Paralympics, Pride House has existed as a place of refuge among the other international pavilions. Created for the 2010 Olympics, the organization set up houses in Whistler and Vancouver to provide LGBT athletes and allies with spaces to relax, unwind and be themselves. The venues also provided resources and support services for international athletes that sought asylum from their homelands. It was a safe space that allowed queers from all over the world come together to share their experiences, kind of like the Olympics themselves. London followed suit this past summer with two weeks of events celebrating and educating queers in sports. The games were so queer-inclusive that many said that the Olympic gaymers trounced their straight competitors. But sadly, the legacy ends there. Plans for an LGBT friendly space in Sochi were scrapped when a judge asserted that the Pride House would undermine Russian society. Of course, this bigoted view underscores the need for an LGBT sanctuary at Sochi.

There has been a huge amount of backlash when past Olympic athletes were caught in immoral acts during the games. When a Greek athlete sent a racist tweet before the games, her Olympic committee stopped her from competing. Even though she could have brought home a prestigious medal, they still exposed her since she “showed no respect for the basic Olympian value.” This value being that everyone should be able to play sports without discrimination of any kind and in the Olympic spirit. But what if it’s the host that’s spouting the hateful rhetoric? So far: nothing. Confronted with questions surrounding Russia’s gay propaganda law, the International Olympic Committee wouldn’t take a stand. Sandrine Tonge, their spokesperson said, “The IOC would like to reiterate its long commitment to non-discrimination against those taking part in the Olympic Games. The IOC is an open organisation and athletes of all orientations will be welcome at the Games.”

How welcome can athletes feel at Sochi next year? USA Today spoke to several out athletes about their experience and concerns for LGBT acceptance in the Olympic Games. Johnny Weir really loves Russia and Russia loves him right back, but even he acknowledges that his sexuality puts him at odds with their society. His advice for queer athletes that aren’t as knowledgable about Russian culture is to tone down the flamboyancy; “if you don’t call attention to yourself, attention won’t come to you.” But in a country where homosexual propaganda might be outlawed, will everyone be afforded that luxury? Even though Weir has traveled Russia with his husband, the journalist acknowledged that his case may be special. Not all queers can hide behind their celebrity (or the country’s love of figure skating) and get a pass.

Blake Skjellerup, a New Zealand speedskater that competed in Vancouver, feels differently. “I don’t want to have to tone myself down about who I am,” he said, “That wasn’t very fun and there’s no way I’m going back in the closet. I just want to be myself and I hate to think that being myself would get me in trouble.” After visiting Vancouver’s Pride House, he was inspired to come out and show others it’s okay to be gay. “If I had felt like I needed a space to be myself away from the Olympic village, it would have been there. I hope the idea can grow from Olympics to Olympics.”

Louise Englefield, the London Pride House coordinator, still wants to pass the queer torch onto Sochi. Since there’s no set venue, she hopes that the national houses will do their queer citizens proud by taking a day to host their own Pride House. And maybe a few more Skjellerups will come out of the closet, a few more Weirs can convince the Russian government that gays aren’t so bad and these out female athletes can continue to take their rightful place on the podium.