Probably you know from the thinly veiled personal blog that Queer Your Tech actually is that I’ve moved recently (a couple months ago, but it still feels very recent). And probably I have also mentioned, like, one million times that I have moved to a city. And one of the cool things about living in New York City versus living in rural New Jersey is the ability to walk everywhere all the time. In rural New Jersey, if you want anything at all within a reasonable time frame, you get in a car. In New York City, if you want anything at all, you hit the pavement with your feet. I love it. I feel better this way.

So it’s no surprise that I have a new app obsession to go with it. Queermos, may I present to you:

Made by the same folks who brought us Zombies Run, The Walk is all about using innovative storytelling to get people out there putting one foot in front of the other. The plot: you’re at Inverness train station when someone mistakes you for an agent (of what agency? Who can say.) and drops a package with you. Just as they do this, the power goes out. You escape as the train station blows up. You’re not sure what’s in the package, but the agent that gave it to you says it could save the world. It just has to get to Edinburgh. And you have to walk it there. 500 miles. 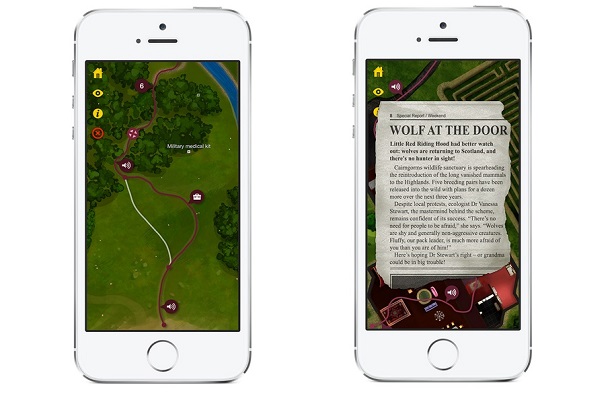 The more you walk, the more bits of the story you uncover. And your phone sits unobtrusively in your pocket or bag. You can even leave it running and save listening to the story-bits of it later. I am loving the walk for a great many reasons — there are fierce female characters in it so far (women in charge of things that talk to each other about something other than a man! Saints preserve us!), and I’m holding out for a few queer ones à la Zombies Run. But mostly, I’m surprised because there are relatively few fitness apps and fitness technologies that I like.

I Can’t Stand Most Fitness Technology

Okay, so a while back I bought a Nike+ Fuelband because I got it at a deep discount and I needed a watch. Never mind that it’s officially super ugly, I really did need the watch. But secretly, in some corner of my brain, I was hoping that the measurability of walking and movement would get me out and moving more in my New Jersey home. That somehow converting my steps into “fuel” would encourage me to, I dunno, to just not sit as much. And it worked. For about two weeks.

Then came the first day where I had a bunch of deadlines to meet. It was one of those days where you just had to sort of sit down for ten hours and write at breakneck pace. I’m sure all of y’all have had that for your job at one time or another — a moment where there wasn’t the time nor the headspace for legit anything else other than what you were working on. That’s the kind of day I was. And when I failed to reach my goal for the day, I felt really bad about it.

And every time I had one of those days, I continued to feel really bad about it. At the time I’m writing this, I just canceled my yoga class because I have so much work to do. I don’t feel great about doing that, but at least I’ve stopped wearing that stupid Fuelband so no one’s going to tell me I “failed” for the day. Life happens — today life included a treasured friend from out of town, Lit Magazine’s launch party and deadlines coming out my ears. That doesn’t sound like a failure to meet my goal — that actually sounds like a lot of success. Especially if I actually meet all those deadlines. (I will.)

And I suppose that’s one reason that I don’t like most fitness technology — the assumption that your entire life’s work is to attain fitness. I’m sorry, Fuelband. I contain multitudes.

Then there’s the obsession fitness tech can engender — we’ve all read David Sedaris’s Stepping Out over the summer, right? If not, I highly recommend it. He details his experience with the FitBit, Nike FuelBand’s more evolved cousin, and how it changes the value of walking. The scary notion that his steps don’t count if it’s not witnessed by technology (a notion that was terrifyingly expanded upon in Dave Eggers’s The Circle, a book I didn’t like but think everyone should read anyway) takes over. The joy of walking around and experiencing something like a new city or a beautiful day becomes commodified. And we as humans become even more watched and measured than we already are. You may have noticed I didn’t cover Apple Watch — it’s the same principle as strapping a FitBit to your wrist and it’s the same idea that I find repulsive. Humans are to be measured. We don’t exist without a witness. 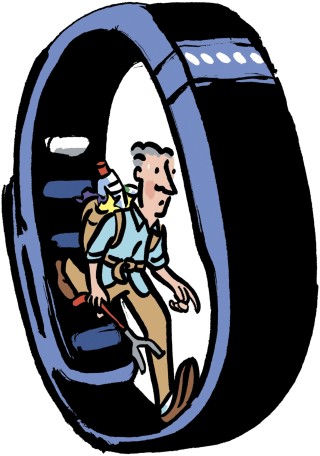 Illustration by Nishant Choksi for The New Yorker

If that weren’t enough, much of fitness tech right now places the emphasis on weight loss. I don’t find that very helpful. Take Fitocracy, for instance. I originally thought I was going to love Fitocracy for the simple reason that it allowed users to obtain badges when they met their goals. I love shit like that — I secretly wish there were an organization like Girl Scouts except for adults and I could earn badges for everything (and yes, I know adults can be Girl Scouts, but it’s not like we’re going to camp and earning badges, okay?!). I goddamn love badges.

However, Fitocracy requires a user to put their weight in to have a complete profile. I finish (almost) everything, so I went and weighed myself for the first time in literally years. And Christ, I did not like the number, didn’t like it one bit. And for a solid hour of my time, I forgot that I look and feel the best I’ve ever looked and felt and became obsessed with that number, a number that didn’t bother me in the slightest until Fitocracy went and blew up my serenity. But I looked at the computer and said to myself, Ali. It’s a website. Really? Really!? And just logged off, never to log back on again.

Yes, I recognize that there are plenty of people that could benefit from both the emphasis on weight loss and the measurability of fitness and humans in general (athletes, people partnering with their doctor to change something about their nutrition or exercise regime). Heck, I bet there are even people who could benefit from the guilt factor if they find that particularly motivating. I am just not one of those people. And if I’m not, I’d bet y’all I’m not alone. I’d bet that some people are right there with me.

Which brings me back around to The Walk.

Why The Walk Is Different

Stories motivate people. It’s true. Stories are why people read books, watch television and see films. We try to find reflections of our life in art. We try to escape. We try to learn something. There are one million reasons why human beings love stories, but those almost don’t matter because the fact is the same. We love stories.

And the people behind The Walk understand that. What they’ve created is, essentially, a new storytelling medium—app-based, borderline augmented reality, audio and visual (sound and maps and text). It’s this crazy multimedia experience with the added benefit of being a fitness app that doesn’t suck a potato. They really nailed it. I love The Walk’s method of encouraging activity rather than guilting me into it. And I love that the emphasis is simply on the act of walking, rather than on weight loss goals or appearance-related anything. And you can still earn badges.

This has been the ninety-ninth installment of  Queer Your Tech with Fun, Autostraddle’s nerdy tech column. Not everything we cover is queer per se, but we talk about customizing this awesome technology you’ve got. Having it our way, expressing our appy selves just like we do with our identities. Here we can talk about anything from app recommendations to choosing a wireless printer to web sites you have to favorite to any other fun shit we can do with technology. Feature image via Shutterstock. Header by Rory Midhani.