Put down your goblet of Moscato because we get Callie right away in this episode, like in the first two minutes. She’s the crunchy, fresh out of the oven, cheesy half of a calzona. What more could we want? 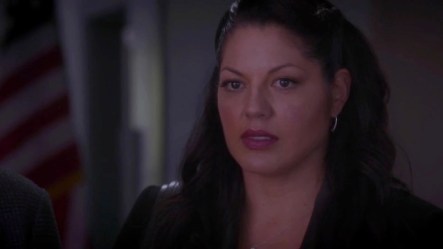 Bitch, I know you did not just compare me to food.

Callie’s wearing her very best Professional Bisexual leather jacket. It’s as if she’s walking down the halls of Madison Square Garden, ready for her cage match. Vince McMahon’s voice can be heard shouting throughout the stadium. Callie and Dr. Rowdy Roddy Piper are ready to throw down together. 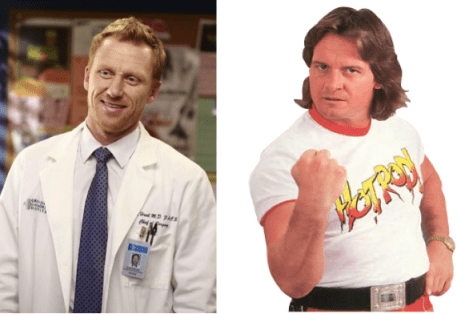 As they walk down the hall towards greatness, Callie grumbles about being busy and having babies. A light sweat beads across her forehead. Stress lines wreak havoc across her face. It could be appendicitis but it’s Callie’s resting worry face. She needs a half-a-gramme of soma and two days off from life, y’all. Dr. Hunt urges Callie to keep lovin’ and keep fightin’. 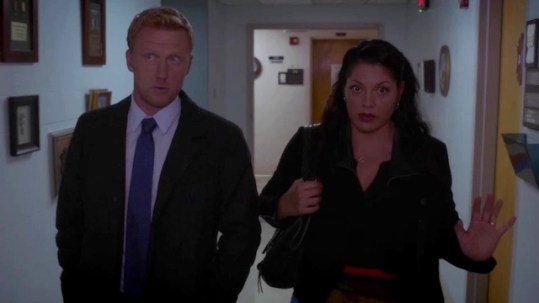 Dr. Hunt leads her to a room full of veterans, all amputees. Within 10 seconds, it’s obvious that somehow Callie’s research is going to be used to create bionic limbs for them. Callie, unfazed, in her quest to use the research to create her own secret cyborg biker-gang, is not impressed by the veterans. There will be no new friends in her Ruff Ryders crew. 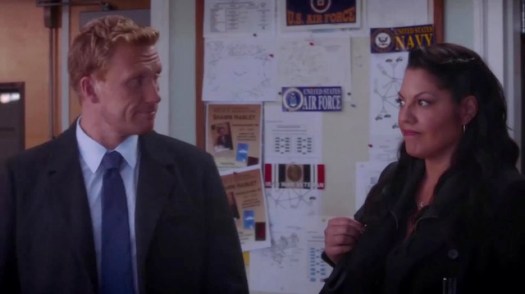 And before we have time to make up any gay story lines for the other characters, Arizona and Dr. Long Kiss Goodnight stroll aggressively across the lobby together. Dr. Long Kiss is weaving a tale of bravery and honor involving amniotic fluid to a rapt Arizona. Wide-eyed, and hanging on every syllable, Arizona stumbles over herself and her flushed cheeks, unable to answer even the smallest questions regarding procedure. 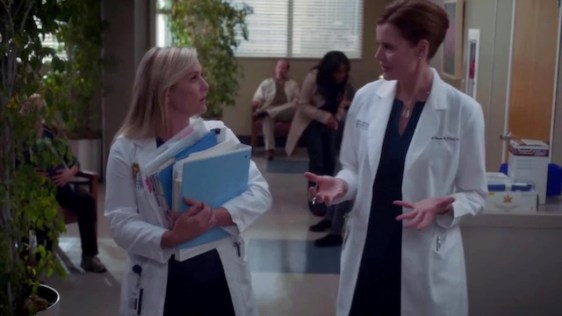 In which Arizona drops her notes and sings ‘Touch my body. Put me on the floor. Wrestle me around. Play with me some more.’

This is how you get yourself on the road to Fingersmithing your boss.

Dr. Geena Davis, Jr. is having no part of this fan-girl business. She whips off her lab coat, pulls a riding crop from her thigh high boots, and orders Arizona to get on her knees. 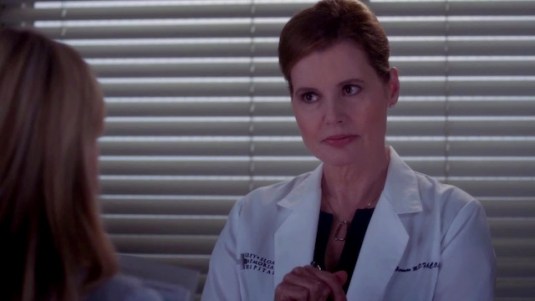 Girl, I will break you like a bad habit.

With a swift metaphorical backhand, Dr. Geena Davis tells Arizona that she better start carrying a notebook like a good little sub.

– and then they totally checked in with each other to make sure that the boundaries of the role-play had been respected. –

Dr. Geena Davis to Arizona: Everything in utero happens at hyper-speed and the sooner you get up to that speed the better. 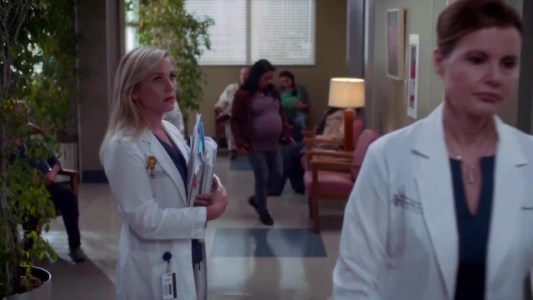 I’m totally gonna have to give up my morning blunt. 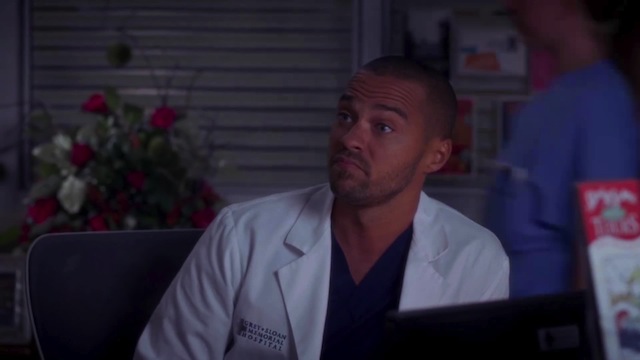 Callie’s cage-match has ended. We see her and Dr. Ginger Spice Hunt speaking with one of the veterans. Callie should be a glob of happiness but since she worships at the Church of Fellowship Baby Stress, she can’t even muster a smile for the hunky All-American veteran. After Dr. Ginger Spice Hunt sings Callie’s praises to the Lord, she pulls him into the hallway and berates him for not singing loud enough to drown out the cries of the baby she doesn’t have yet. 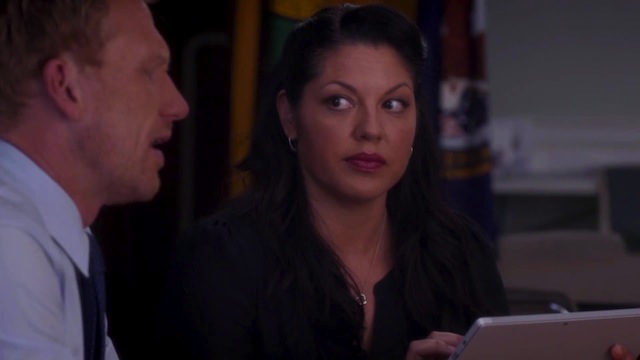 I straight up got stuck with Howdy Doody this whole episode.

Sidenote: I’m not buying this push-back from Callie. I don’t think she’d really be so adamant about not wanting to work or even investigate working with the veterans but whatevs.

Ten minutes in, ding, dong, Calzona’s here. Piping hot, dripping in drama with a side of extra complaints, and ready to process. They’re both frothing about work. Callie still refuses to add any new members to her post-apocalyptic cyborg biker-gang. Arizona’s mad because Dr. Master is making her wait for gratification. They’re both feeling life so hard. There’s never any time to do the things like hug the daughter they already have. Doctoring is a bitch, y’all. 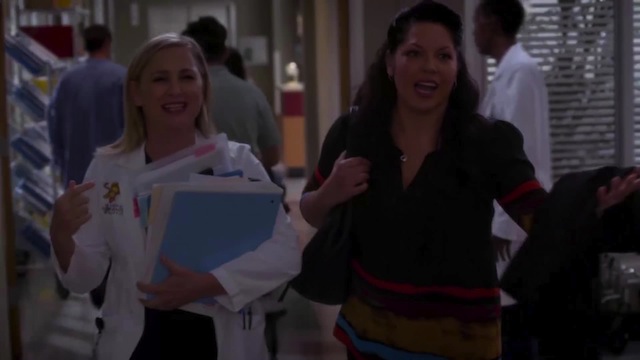 lol we make so much money tho

But in the middle of their mutual venting session, Callie gives her best change of subject hairflip and pounces.

Freak-Out Callie: So is this your way of telling me that you’re canceling our meeting with the surrogacy agency tonight?

Startled, Arizona sparks a leaf and promises that they’ll make it all work. And to remind them/us that Calzona is in fact a loving couple and not two women on the road to an inevitable highly dramatic uncoupling, Arizona asks Callie for a pep talk. 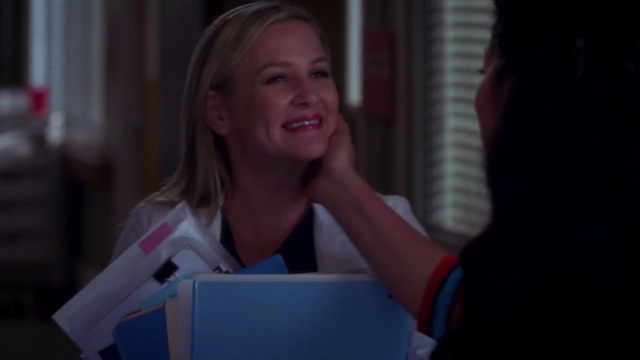 Callie pats Arizona on the bum and says, “Keep your eye on the ball, kid. Swing hard. We’ll get that baby.”

Back in Callie’s Laboratory, Callie’s using an electromygraph to spy on rival biker gangs and see if hunky All-American veteran’s nerves are communicating with his muscles. This test will help the world determine if he can use Callie’s top secret robo-leg. His nerves aren’t doing a damn thing and Callie’s quick to be like ‘Boy, bye. No bionics for you.’ 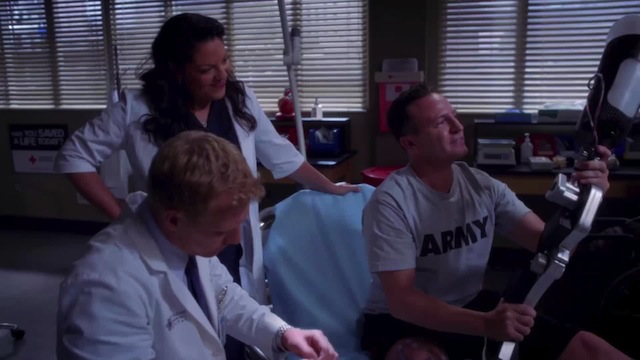 Yeah I built that. You break. You buy.

Her bad attitude disrupts Dr. Ginger Hunt’s moon cycle. He pulls her into the hallway and attempts his signature move, the Sleeper Hold. Callie blocks him, steals a chair from the announcers, and slaps him over the back with it. The referees were of course not paying any attention. Callie is Team No New Friends, esp when their nerves don’t work. She screams at Dr. Hunt, “I’m in charge and I’m leaving.” 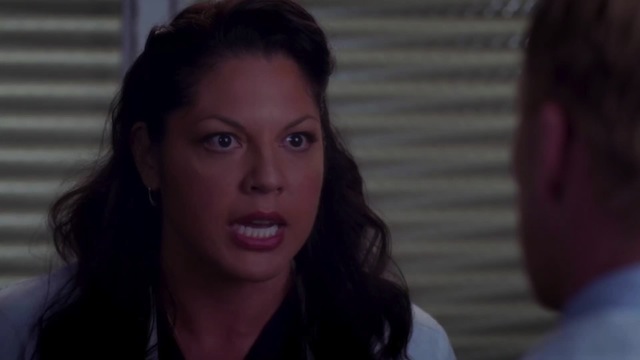 My research. My cyborg biker gang. I will eat your brains if you test me again.

Side note pt.2: Still not buying this idea that Callie has an exciting problem related to her specialty right in front of her and won’t dive in and try to solve it. I’m not buying this patriarchal bullshit where Dr. Hunt has to coax her into using her brilliance. I get that she’s stressed but like this reminds me of that time in Glee where Finn convinces Santana that it’s ok to be gay. Stop.

Also, mad love to whoever is choosing the music on Grey’s because my baby momma, Jhene Aiko, is getting some play. They used her song ‘Lyin King’ over the next few scenes. (My fave from her new album is Limbo Limbo Limbo and you might already know her from The Worst.) 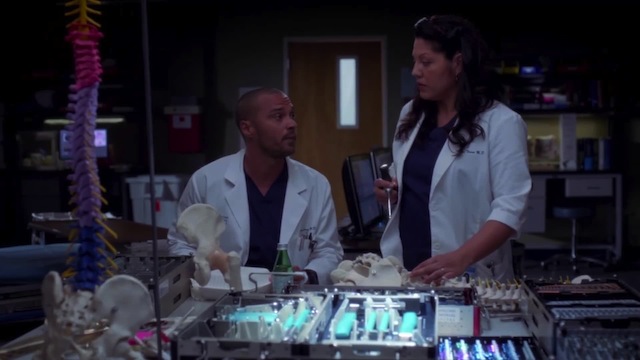 Mami, you can’t just be wilin’ out like that, ok?

Dr. SexyBrain McPrettyEyes finds Callie in her laboratory and lays down the law of the hospital. He reminds Callie that she’s a distinguished member of the Grey-Sloan Memorial Illuminati and as such, she can’t be engaged in cage matches with Dr. Hunt during work hours. Callie sucks her teeth a little but finally comes around. Together they throw up the Roc symbol while Callie grinds bones for their sacred ritual.

They then discover that Dr. SexyBrain McPrettyEyes is also the Nerve Whisperer. He is the chosen one and will bring Callie’s bionic biker gang to life and save the veterans. 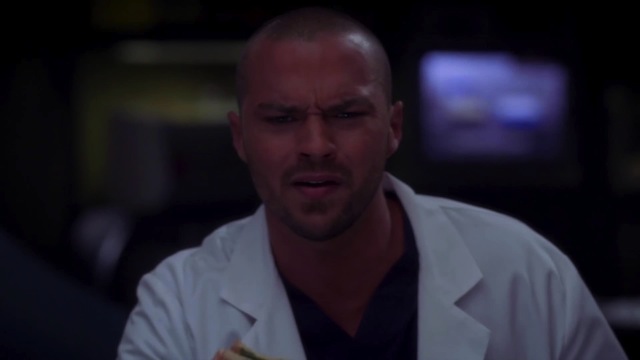 Wait, so this whole time Callie just needed a dude to help her solve her problems? TF?

Cut to the nurse’s station where a weary Arizona lounges for a minute, sneaking one second of rest from servitude. Dr. Geena Davis, Jr., sensing weakness, finds Arizona chillen out and unprepared. Arizona offers an excuse, something about Moms being unhelpful to doctors. It’s all bs and Dr. Geena Davis, jr. tells her to pull up her big girl panties and get it the hell together. 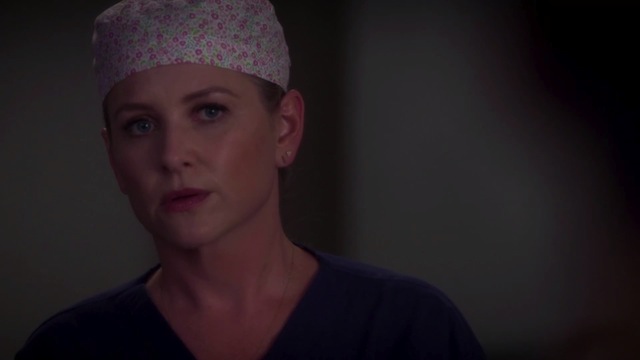 That was way harsh, Tai.

And then we’re back again to Dr. Hunt who opens his lion’s mouth and lets out all the feelings re: wars and losing Christina. It’s monologue time for Dr. Ginger Spice Hunt. Callie, who’s been feeling muy heavy metal and reflective, accepts his truth and offers him a spot in the O.R. to watch the Nerve Whisperer work some magic.

Praise Lesbian Jesus, Arizona and Callie actually make it to the Little Shop of Surrogacy together without fighting. 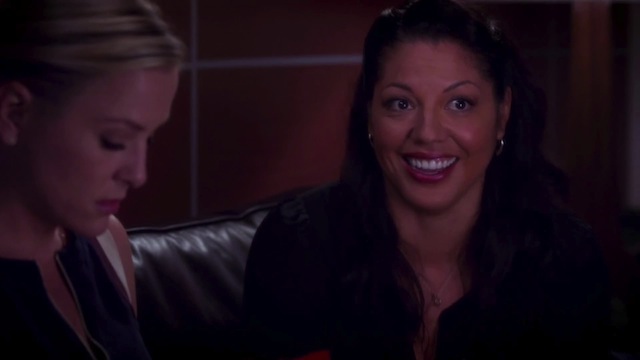 Make-up. Flawless. Skin. Flawless. Posted up on leather chairs. Flawless. Boastin’ bout bionics. Flawless. This rock. Holy mother of domesticity, they’re being cute with each other. It lasts about two seconds. And then they’re both singing, ‘Aye, aye, aye, come me duele.’ 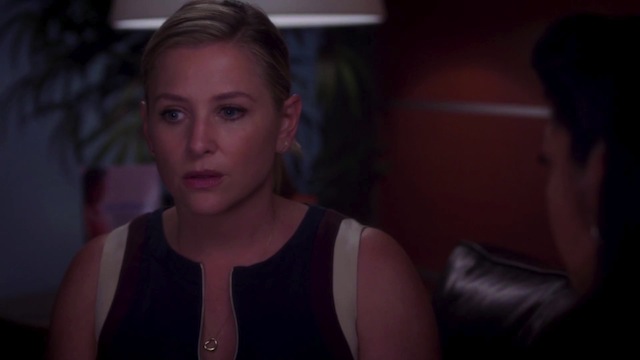 But babe, can we baby?

The pressure Calzona is putting on themselves to have another baby is stressing me the fuck out. Why do people do this to themselves? In Calzona, the Auto-novela, this would be the part where Arizona says:

Let’s get out of here, my sweet human.

And then she’d lead Callie out into the rain where they’d kiss Love Jones style and promise to focus their energies on healing their relationship with each other. They’d run holding hands to their bomb apartment, snuggle their daughter, Sofia, and sing her to sleep. Together, they’d then take shower, and engage in a long night of super-connected, body-to-body, shared spiritual wavelength intimacy.

But in Shondaland, shrieky Callie puts Arizona in a Cutthroat Kitchen pressure cooker and asks her for the millionth time if they’re going to have another baby.

Just as they’re about to sing-rumble it out ala West Side Story, a potential surrogate walks into the room. Cue dramatic music. 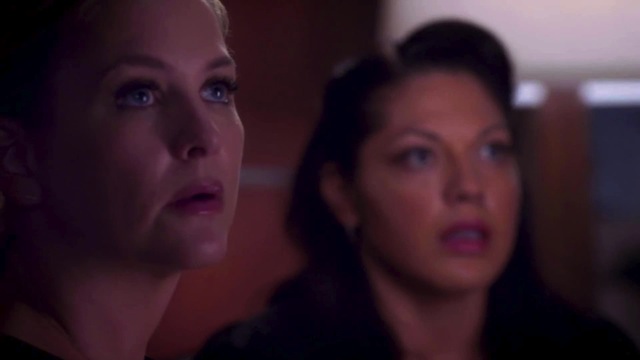 New Game: Every time Callie or Arizona says the word baby, let’s swap it out for the word toaster. Then we’ll pour a little Moscato out on the concrete to pay our respects. 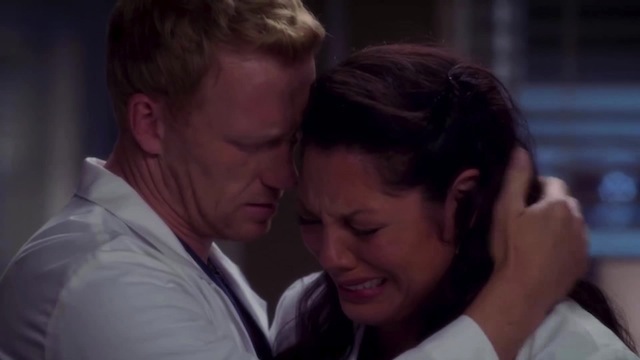 But, Dr. Ginger Spice, all I’m asking for is a new toaster.

What should Callie name her biker gang? Do you own a Professional Bisexual leather jacket? Will Dr. Geena Davis, Jr., ever crack a smile or a whip? Should Arizona give up her morning blunt? Tell me things. What did you love/hate about this episode, besides the stench of patriarchy?