The ACLU reports that single-sex public education is on the rise and the picture it paints isn’t pretty. In the initial findings of the organization’s “Teach Kids, Not Stereotypes” campaign, they report that the majority of the districts studied based their programs on unproven theories surrounding neurological differences between boys and girls and that many of the teachers relied on stereotypes to plan and conduct their classes.

The campaign, which was launched in May, sent requests to schools in fifteen states asking the districts to detail the single-sex programs in their schools. It was introduced in response to the growing trend in public single-sex education — a trend that seems to have taken off after a 2006 amendment to Title IX of the Education Amendment of 1972 clarified why and how single-sex classrooms can be implemented. That same Title IX that women athletes (and their fans) know and love created curricular guidelines for schools around the country that would help prevent federal money from funding discrimination. The 2006 amendment relaxed Title IX’s previously stringent requirements on single-sex education and displaced Title IX’s singular objective (the elimination of sex discrimination) with goals such as the “achievement of an important governmental or educational objective.” 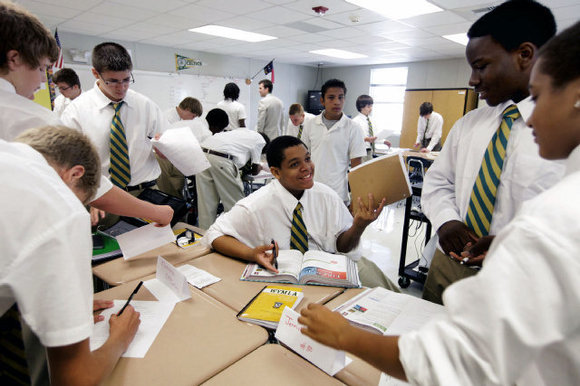 Hello I am a boy and I am so totally and completely incapable of sitting still and paying atten — Oh hey! Watch me do this thing where I flip my pen around my fingers!

There’s a good deal of speculation that that amendment was sparked by concern over the supposed “boy crisis.” In 2006, news of the boy crisis was everywhere. While the trope has been making rounds since women started demanding the right to be viewed as human beings and continues to make guest appearances when it starts feeling lonely and forgotten, the political climate of that particular era was ripe for boy-focused legislation. Remove the barriers for single-sex classrooms, so the story goes, and the boys — unfettered by educational models that play to girls’ strengths — will again find themselves among the top academic performers.

Of course, the boy crisis has been repeatedly shown to have little scientific basis. And from ashes to ashes, dust to dust. The ACLU found that many of the programs surveyed operated under the mistaken belief that boys are girls are “hardwired” differently. One Virginia school reported that,

“[b]oys prefer reading material that is non-fiction, or if fiction, adventure oriented. In math, boys can get interested in ‘pure’ math and geometry, without linking it to the real world applications. The female brain does not prefer such action. … girls prefer reading fiction material that does not necessarily contain much action. In math, girls generally prefer a real world application that shows them why it is meaningful. They are generally not interested in ‘pure’ math for its own sake.”

Many of the schools cited these brain differences as the primary reason for offering single-sex classes. While it’s true that there are plenty of boys who enjoy non-fiction and girls who prefer their geometry in real-life examples, the differences among boys and among girls are actually greater than those differences between the two sexes. Some schools pointed to distractions and flirting that goes on in co-ed classrooms as a motivation for instituting segregated programs. The gender essentialism and assumptions of heterosexuality implicit in both of these justifications is just too glaring to ignore. What happens if a boy decides he’d rather be drinking cocoa (I couldn’t make this ish up) with the girls next door? What kinds of messages do LGBT kids get about their identities? Rather than fighting stereotypes by fostering a diverse environment that encourages kids to work out their differences, these classrooms seem to cement them at an early age. 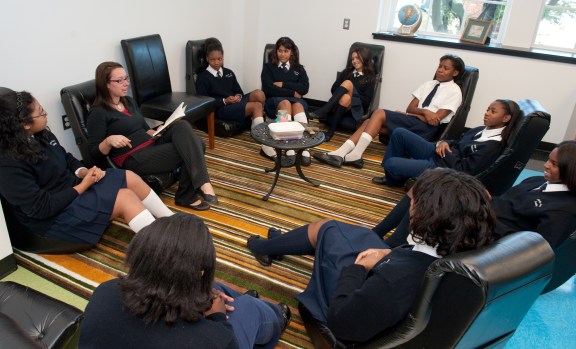 I am a young lady and I could just sit in this big circle of sisterhood with my legs daintily crossed and talk about feelings and Heathcliff all day.

Taking a moment to revisit the boy crisis, it’s worth pointing out that while boys overall are only barely lagging behind girls, among minority and lower-class children there is a more significant gender gap. One of the schools studied (Foley Intermediate School, Alabama) introduced single-sex programs specifically to address lower test scores among minority boys. But the history of sex-segregated classrooms in the south is long and twisted; in an effort to prevent black boys and white girls from bring in the same room, single-sex became the norm after Brown v. Board of Education forced racial integration. The role that race and socioeconomic status play in the debate isn’t one that can’t be overlooked.

The report shows that, at the very least, the 2006 amendment has led to a broad misapplication of Title IX. Rather than fighting discrimination and creating opportunities for men and women, the changes have led to the reinforcement of stereotypes. Moreover, there has yet to be a single academically rigorous study that proves that single-sex education leads to better outcomes. While many have been offered up, they all fail to control for some crucial factor such as class size, funding, parental involvement or previous achievement. The ACLU is recommending that the legislature repeal the 2006 amendment. By removing the language that allows schools to invent their own “educational objectives,” schools will be required to consider not whether more of their boys will get into college, but whether their programs help to end sexism.