My fellow bookworms, do you have inferiority complexes because (sometimes) you still count with your fingers when doing simple math? My loveable reading rainbows, don’t feel bad about yourselves. If you enjoy Shakespeare, other classical texts, and poetry, your brain has superpowers. Here’s something to consider next time you find yourself between the (book) covers wearing nothing but your rodeOH, snuggling with your cat and contemplating Elizabethan drag culture in Twelfth Night: science now confirms that reading the famous bard and his literary companions literally lights up your brain and makes you not only smarter but also a better person.

At Liverpool University, scientists, psychologists, and English academics scanned the brain activity of volunteers reading works by William Shakespeare, William Wordsworth, and T.S. Eliot. Volunteers were then made to read modern translations of the texts while having their brain activity monitored again. The verdict? The more challenging the text, the more the brain lit up, causing English professor Philip Davis, who collaborated on the study at the university’s magnetic resonance centre to conclude that “serious literature acts like a rocket booster to the brain.” He continued, explaining, “The research shows the power of literature to shift mental pathways, to create new thoughts, shapes, and connections in the young and staid alike.” We’ve already told you that reading fiction makes you a nice person, but so does reading poetry and plays! The connections lighting up your brain and rocket boosting new neurological pathways increase your self awareness, therefore making you an all-around more decent person to be around. 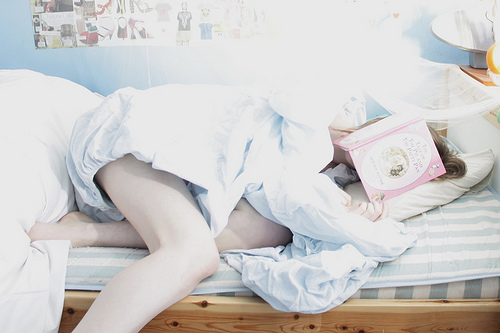 According to the article:

“The research also found that reading poetry, in particular, increases activity in the right hemisphere of the brain, an area concerned with “autobiographical memory”, helping the reader to reflect on and reappraise their own experiences in light of what they have read. The academics said this meant the classics were more useful than self-help books.”

Hold on a minute, you may be angrily muttering to yourself, is Autostraddle seriously telling me I need to read a bunch of dead white men called William to be a better person? Excuse me while I minimize your article to dismantle patriarchal language by reading a PDF of the beginning of Judith Butler’s Gender Trouble. To which I would reply, yes! Go read Judith Butler! It’ll also make you smarter, nicer, etc. The Liverpool University team found that the brain benefitted from the classics because it was presented with different sentence structures and words used in unfamiliar ways. Following that logic, Judith Butler, who definitely uses words in new ways, can also act like a “rocket booster” to your mind as can any writer who dares to creatively play with words and sentence structure. Why don’t you go reread all of our Pure Poetry pieces? It’ll be good for your brain. I’m guessing that the same goes for learning a new language or even dating someone from a different country/region who speaks English a little differently than you do. Orgasms light up the brain too. Just sayin’.