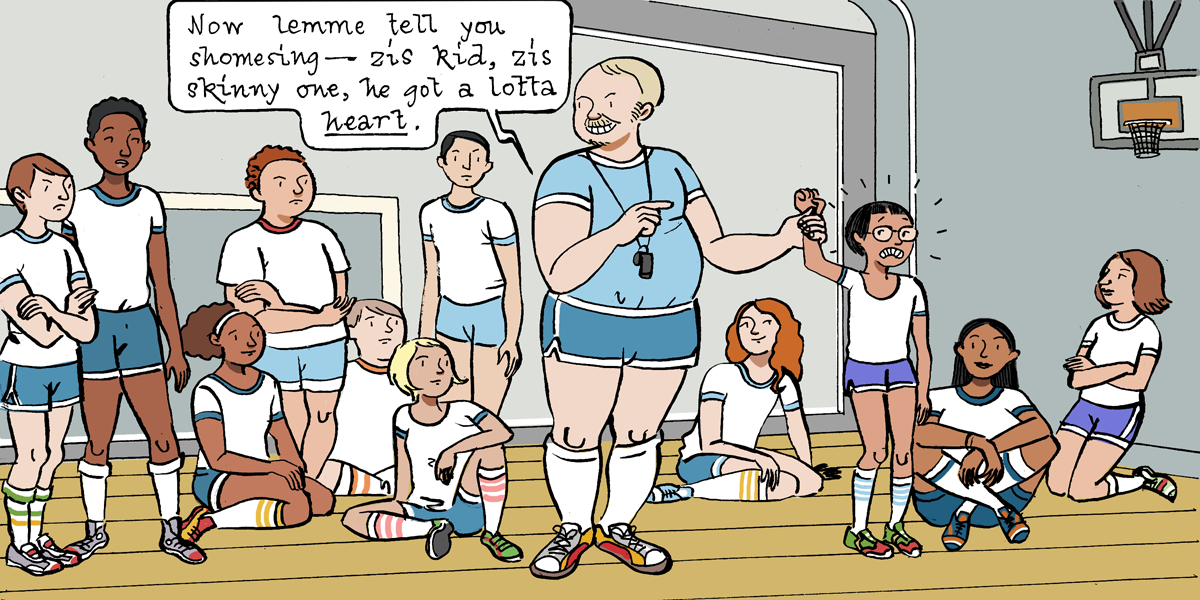 1. Maybe you can relate: I absolutely loathed gym class in seventh grade. My bony frame, skinny arms, chicken legs—let’s not even talk about ‘shirts vs. skins’—but maybe worst of all, the sanctioned sense of hierarchy and competition. But there were only so many times I could claim to have a stomachache. So most of the time I had no choice but to participate in the dreaded ritual. One Thursday, Mr. Popovich introduced us to ‘European Handball’, which was like soccer, in that you scored goals by getting a ball into the back of a net, except that you passed the ball with your hands. (“What fresh hell is this?” I didn’t think to myself.) Anyway, as usual, five ‘captains’ were nominated—these were inevitably the tallest, strongest, most athletic and popular boys of our class. And yes, they were always boys. In turn, they would pick their teams, starting with the next most athletic boys, and so on, until they got to the least physical boys. At the end of this lottery, it was usually just the girls left…and me. So Mr. Popovich got it into his head that the rest of us should form a sixth team, and we did.

Something struck me that afternoon and I got pretty het up, angry about this system that reinforced a sense of validation according to physical prowess, power, and gender. And I guess that anger translated itself into a small superpower because: in the first game I scored two goals (I imagine little me hurling the ball at the goal, teeth bared, skinny limbs flailing), and we beat the first boys’ team. In the second game, I scored another goal and we were off to the finals, against all odds. The girls’ team didn’t win the final round, but sister, we gave the boys’ teams a little demonstration of femme power, yes we did. After this idiotic tournament, Mr. Popovich was impressed enough that he came up to me, lifted me up from my cross-legged seat on the floor by one skinny caramel-colored arm and said something about how I had showed a lot of heart and spirit and that was what P.E. was all about. (53-year-old me calls bullshit on that, Mr. Popovich, and would have wanted you to dismantle the systems that made P.E. the hellscape that it was.) I was mortified, to be sure, but also honored and validated, to be on the girls’ team. And oh yes, honey—I’ve never left. 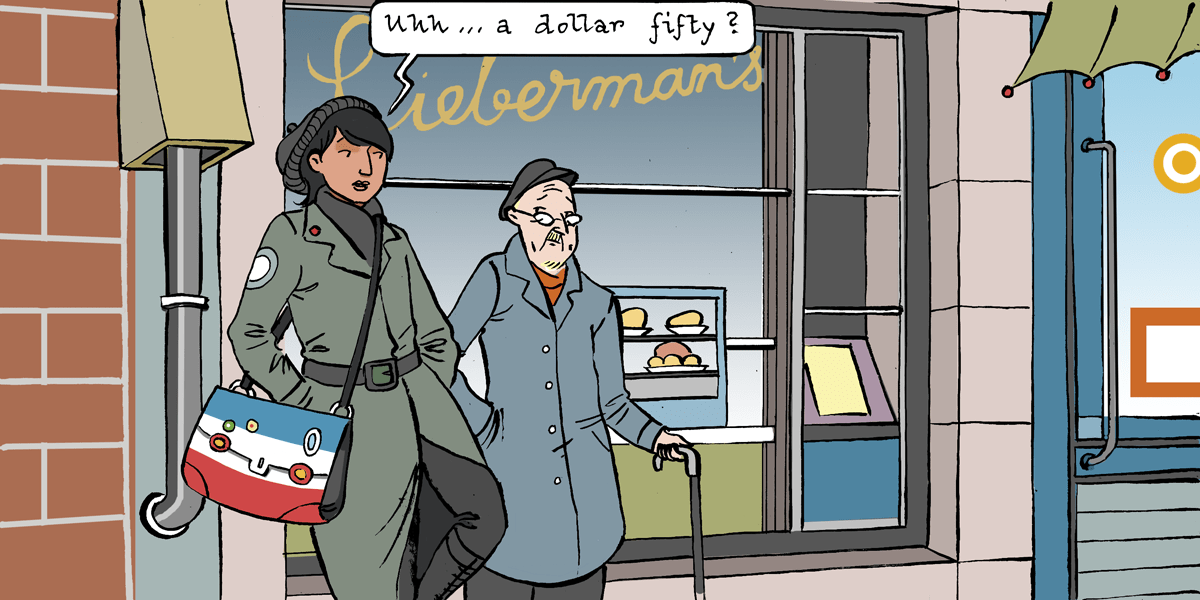 2. I’m home in Manhattan during fall break from college. I’m heading downtown to meet friends for an early drink at Holiday bar, tatty seats, grumpy bartender and all. I should have just walked there but instead I’m waiting for the M15 bus on 2nd avenue and 23rd street. I’m leaning up against the façade of a deli, thinking that the closest thing they have to a ‘premium’ beer at Holiday is…Rolling Rock. An older fella, a small man with a cap and cane, sidles up to me, a little too close. After a minute he asks: “How much?” I’m a little flummoxed but, thinking he means “How much is the bus fare?” I answer: “It’s…it’s a dollar fifty.” His eyes light up but now it’s his turn to be flummoxed—he says nothing but proceeds to shuffle away, clearly distraught. It’s only later, on the bus, while I’m mulling over this weird interaction, that it dawns on me what his enquiry actually entailed. 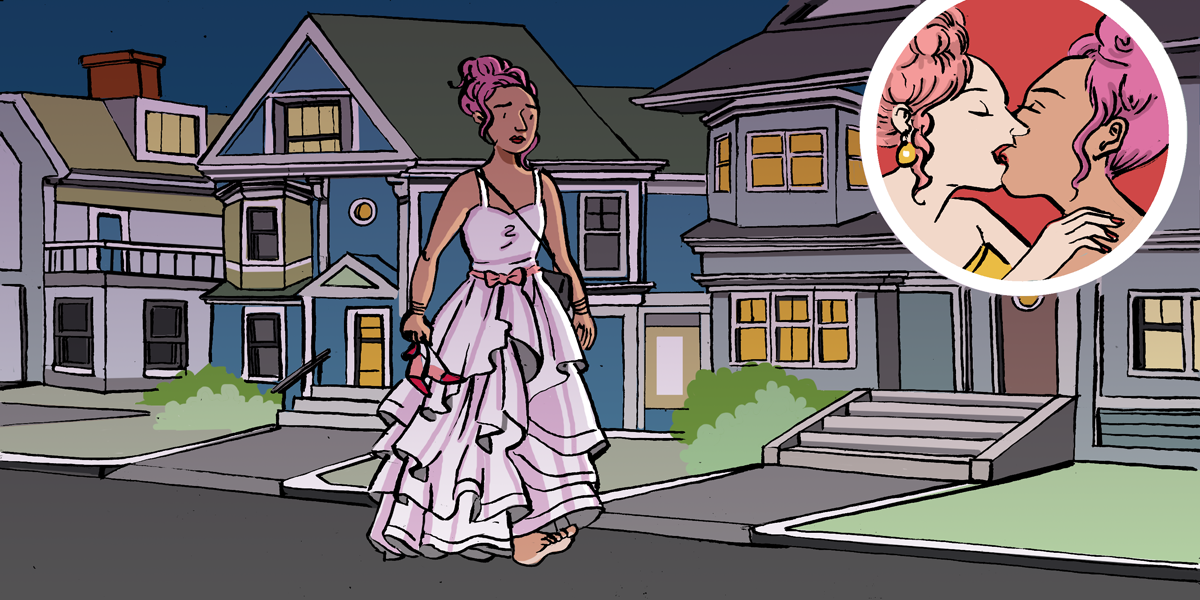 3. The architecture school I attended hosted the best Hallowe’en party on campus. Everyone put in extra effort into their costumes and the atmosphere was heady, glamorous, decadent. For me, it was a chance to indulge: I would go over to the vintage clothing store in Porter Square (next to the witchcraft store, natch) and pick out a cheap, frilly pink or lavender wedding/prom dress, organza ruffles, spaghetti straps, you girls know the deal. I’d dyed my hair a very tasteful fuschia (or was it cyclamen?) that year and arranged my tresses into a messy updo. I wore long white gloves like I was a Southern debutante. I’m not sure if this was the first time I’d played dress-up since it was Hallowe’en, it seemed like it was the one night when such things were ‘allowed’, that wearing such clothes didn’t seem transgressive.

I had a lively time that night. Michele (the Swiss exchange student, who also loved The Primitives and Tintin, and rode a Vespa back in Zurich) had, along with two other girls, had got dolled up and looked like Rococo courtesans, with elaborate Marie Antoinette-style wigs and poufy floor-length gowns—we’d been sharing cigarettes recently after lectures and at parties and were becoming friends quite quickly, but that night, she kissed me. It was my first kiss with a girl, as a girl. I was a little giddy, to say the least. Later that night when I had to pee, I headed to the men’s room (ridiculous, I know) where my transgression reared up: the boys there all turned from their urinals and informed me, angrily, that I was in the wrong bathroom and told me to get out. I think I explained that, um, it was Hallowe’en and that I was in costume, and that I just wanted to pee in peace, for goddess’ sake. A night of firsts. Michele went off to another party but I was too tired to join her. I couldn’t ride my bike home owing to my voluminous frock so I legged it—my pumps were not made for walking, so I took them off at some point and ambled through the streets of Cambridge barefoot, equal parts drunk, melancholy and elated. 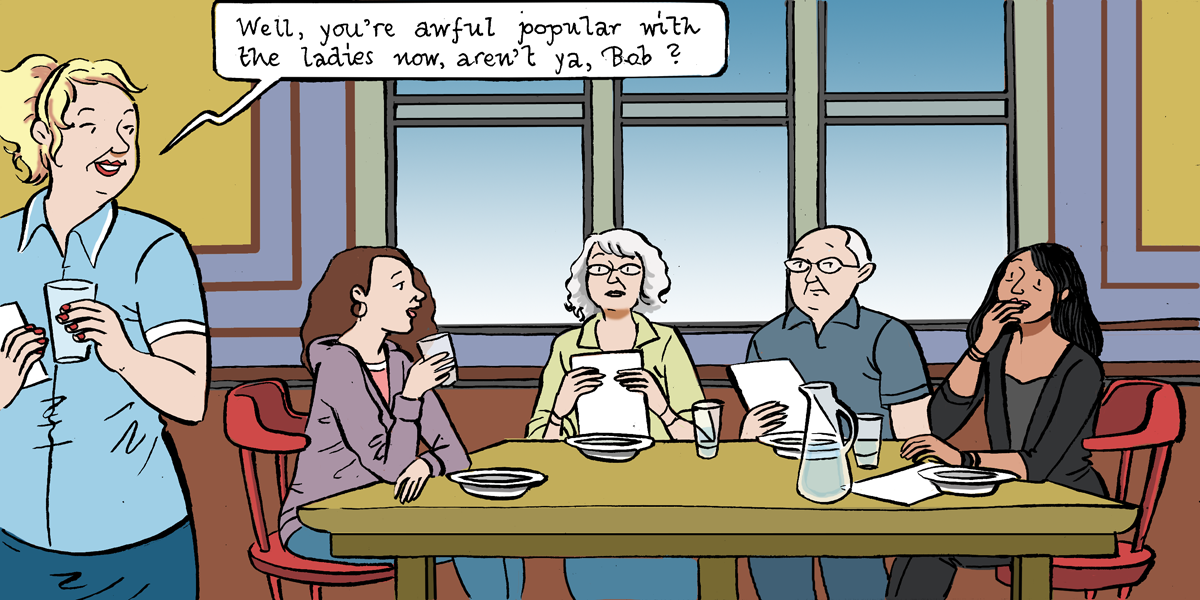 4. Joan and I are upstate, on the way up to her mom’s place in the Adirondacks, when we make a stop in Saratoga Springs to meet mom and her new boyfriend, Bob, for lunch. He’s meeting us at The Olde Bryan Inn, which sounds like it’s right up my alley. He’s been sitting at a table before we arrive, but he comes out to meet us in the parking lot when we drive up and ushers us inside. They have Schöfferhofer on tap, which for some reason seems very exotic to me (I was still in my 40s, whaddaya want.) The waitress comes over to our table with menus and makes idle chit-chat with Bob, who she seems to know well. As she takes our drinks orders, and starts heading back to the bar, she says: “Well, I was worried about ya Bob, sittin’ there by yourself earlier on, but here you are now, surrounded by three lovely ladies!”

Joan turns to me and smiles—I’m chuckling to myself. Joan’s mom and Bob are confused but say nothing. Maybe this was the first signpost on the right path.

Bishakh's work has appeared in many publications, including The New Yorker. Her graphic novels Apsara Engine (from The Feminist Press) and Spellbound (from Street Noise Books) are out in 2020.