Just one week after perhaps the most powerful episode in the show’s history, Shonda Rhimes’ force-of-nature hit show Scandal has once again destroyed our hearts. While last week it was because of a tragic, poignant and timely story about an unarmed black teenager being murdered by a racist police officer, this week’s story touched the souls of audiences everywhere with two tales of love trying to rise above what seem like impossible situations. 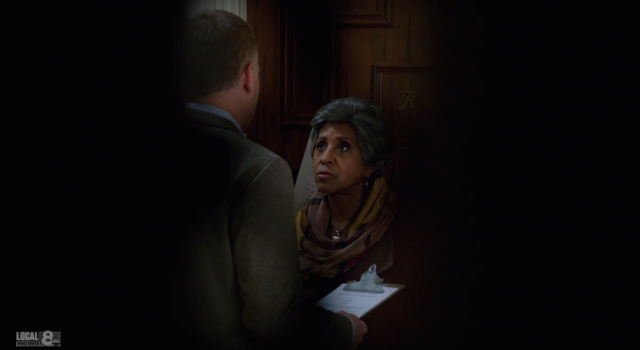 Rose, defending the home of the woman she loves.

Early in the episode, Olivia Pope is talking on the phone when she hears an argument across the hall from her. A woman named Rose is out there defending Olivia’s across-the-hall neighbor’s apartment from having its locks changed. If you recall, when Olivia was kidnapped, her abductors dragged her into this apartment to hide her. They were, unfortunately, also holding Lois, the woman who lived there, hostage and shot her to help create a way to get Olivia out of the building and get rid of the witness. At first, when Olivia says she’ll help, Rose says that she and Lois were good friends, but there are a lot of clues that there’s more to it than that. They spend all day, every day together, they go on vacation together, she has Lois’ power of attorney; Rose says she knows Lois like she knows herself.

After Olivia spends most of the episode trying to find Lois’ body, she tells Rose that things aren’t looking good, and that maybe she shouldn’t have her hopes up. Rose says she understands this. She knows Lois is gone. She also says that Lois was the love of her life. The pain in her voice when she says “I know she didn’t just get lost. I know she’s gone, I can feel it, But I still need to know what happened,” is palpable. This is the first time I cried during this episode. 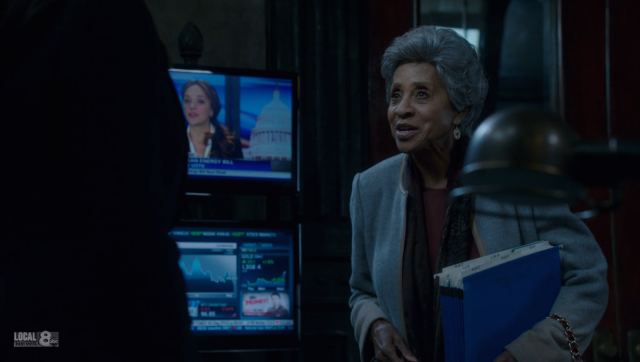 I think we all wish we had a girlfriend as tenacious as Rose was in this episode.

These two fell in love when they were sixteen, sixty years earlier. The show completely breaks our hearts when Rose says that Lois’ parents found out about the two of them and moved her out of state. And that she understands why. She says “I couldn’t blame ’em; that was sixty years ago. It was hard enough being black, let alone black and gay,” and our collective hearts drop into our feet. In their time apart, Lois got married to man, but she and Rose never stopped loving each other. Rose says that when Lois’ husband died, she wrote Rose a letter, and an hour later, Rose hopped on a plane to be with the love of her life. In response to Olivia’s question as to why the two never lived together, even after Lois’ husband died, Rose gives the perfectly adorable Old Lady answer of “she kept that damn place way too hot.”

It is so amazing and so important to see older queer women on TV like this, and especially older queer women of color. We already get so little representation for queer women, and diversity in that representation is even rarer. Seeing their stories is vitally important. A character like Rose, wonderfully played by Marla Gibbs who was nominated for five Emmys for her role as Florence on The Jeffersons and later stared in and co-produced the sitcom 227, lets us see the very real and very human side of our community’s history. A character like this gives us a direct account of how hard it was to be black, gay and a woman in previous generations in America, and it’s important that we learn about and from our past. We learn so much about our community and so much about ourselves when we see stories like this. After all, how can we know where we’re going if we don’t know where we’ve been? 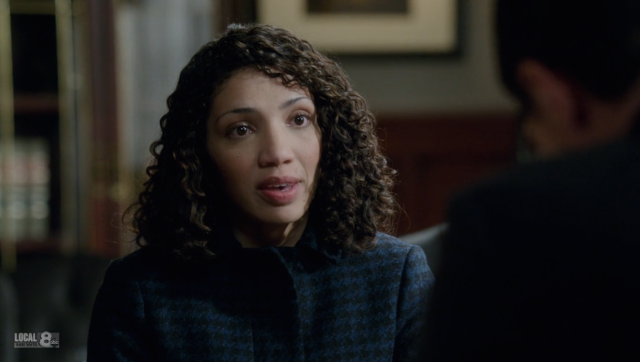 When Jasika Nicole’s on your side, you know you’ve got a winning team.

The other highlight of this episode for me was Jasika Nicole’s storyline and performance. Jasika Nicole is the supremely talented actress, artist, craft master, seamstress, knitter and all-around adorable person who plays Huck’s long-lost wife, Kim, on the show. She also gives terrifically fun-to-read interviews and will be one of the special guests at the upcoming spring A-Camp.

Kim had some real screen time this episode for the first time in a while, and boy oh boy did she make the most of it. First she shows up in US Attorney General David Rosen’s office on a day when he’s accepting visits from random people off the street (it’s very reminiscent of Leo McGarry’s Big Block of Cheese Day), including one man who says the moon is just a hologram. Instead of saying something equally ridiculous, she walks in and says that her husband used to be an assassin for a secret government agency called B613. She even has the files to prove it. If you’re familiar at all with the show Scandal, you know that this means that the chance she’s going to be murdered just skyrocketed. Obviously, this would be the absolute worst and I was ridiculously worried about her safety for the rest of the episode. 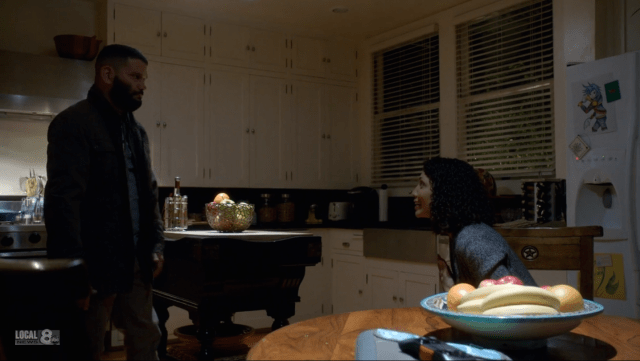 Who could say no to Jasika Nicole? Even when she’s asking you to do something that could put all your lives at risk?

Kim and Diego (that’s Huck’s real name, and boy is it weird to hear someone call Huck anything other than “Huck” as much as Kim does) are finally spending some real family time together. She’s just so happy now that she knows her husband has been telling the truth this whole time and that she can finally do something to help him. Above all, she’s proud of him for being brave and being willing to testify in front of the Attorney General so that they can finally move on with their lives and be a family again. Huck knows that it’s not that simple.

He knows the ins and outs of B613 and therefore he knows that she’s putting both of them, as well as David Rosen and Olivia Pope and everyone else on the show, in mortal danger. Huck decides that he’ll lie to Rosen, denying that he was ever a part of B613. For the first few questions of the deposition, he does exactly that. However, as soon as he sees how he’s breaking Kim’s heart and he starts remembering who they were together before B613, he starts to give real answers. When a she hears how horrifyingly he was treated, how he was put in a small, dark hole where he had to make up an entire world for himself, how he mentally wrote a letter to her and their son every day he was down there, tears are falling down her cheek. This was the second time I cried. 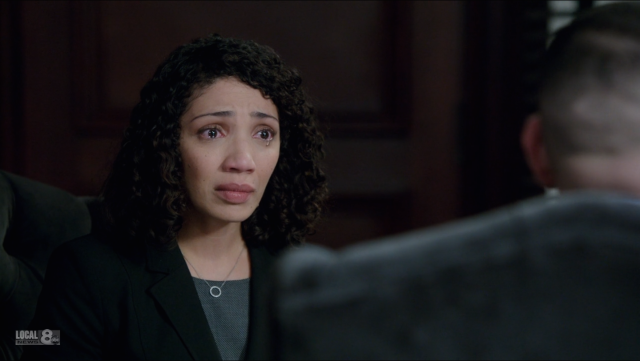 Jasika, why do you have to stomp all over my heart with just a look?

Both Jasika Nicole and Guillermo Diaz, who plays Huck, gave powerhouse performances in this episode. Both of them are also out, and both are people of color, and these distinctions are important. Shonda Rhimes is known for her commitment to diversity, both among her casts and her characters, and to have Nicole and Diaz, two out people of color playing a straight couple highlights that. It wasn’t that long ago that places like Newsweek argued that gay actors couldn’t convincingly play straight roles, but just on this show alone, Rhimes has these two, along with Portia de Rossi as the head of the RNC Elizabeth North, all playing straight characters. This is progress — queer representation on screen is important, and so is out queer representation on the cast list.

Toward the end of the episode, Olivia’s team eventually does find Lois’ body, thanks to the serial number on her replacement hip, and Olivia goes to break the news to Rose. Of course, just as any long-term partner would, Rose asks what happened to her, how she died. Olivia, not wanting to tell the story of Lois’ violent death, instead tells her a story about how Lois was walking in Georgetown, down by the river when she sat down on a bench and there, had a brain aneurysm. She says this is the most painless way to die, that it was just like going to sleep on a warm day, hearing the calm waters of the river beside her. While this brings some comfort to Rose, she also cries over the casket, saying, “It’s just too soon. it’s still too soon. You left way too soon. Lo, why did you have to go and have to do that? Now I’m alone, I’m all alone Lo, all alone. Things ain’t never gonna be the same without you.” I cried for a third time. 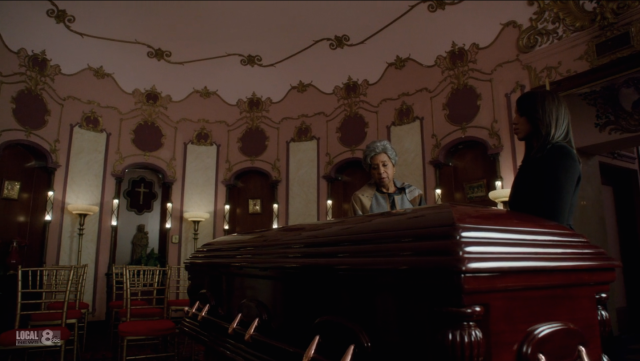 Oh, Rose, I just want you to be happy.

I like that Rose’s idea of using the serial number on Lois’ recently replaced hip to find her is what ultimately, helps the team find Lois in the end. There’s something satisfying in that. That it was Rose’s devotion and intimate knowledge of her loved one that allowed her to find peace. Largely, it’s Rose’s devotion to Lois that makes their love story so remarkable. As she tells Olivia when they’re still trying to find out what happened, she waited over forty years to be able to have a relationship with the woman she loved, and now that she’s gone, she’s willing to be patient enough to hang in there until the very end.

With this episode we saw a beautifully told story of love between two women that lasted for over sixty years. We saw a queer woman of color tell her story of facing intolerance and adversity so strong that it took forty years off of her relationship. We also saw that woman say that, in the end, none of that was enough to kill the love that she shared with the woman she was meant to be with. We also saw Jasika Nicole, an extremely talented openly queer, biracial actress give the best performance she’s ever given on this show. Once again, Scandal and Shonda Rhimes have delivered TV unlike anything else out there. Thanks to shows like Scandal, the stories of queer women are being told and thanks to shows like Scandal, queer people are not only getting jobs based on their talent, they’re knocking those jobs out of the park. When we talk about the future of representation on TV, Scandal is a good place to start the conversation.