SARAH PALIN: The 18 Biggest Falsehoods from Sarah Palin’s book “Going Rogue,” which we’ve kindly avoided mentioning until now because we are in denial that this book exists, that Sarah Palin ever did exist and still exists and is profiting from her own existence. 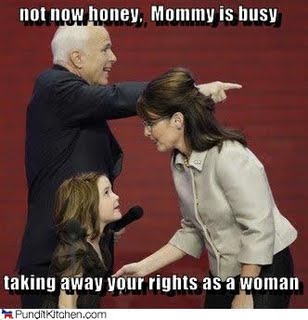 Furthermore Palin believes in racial profiling, thinks Glenn Beck is great for America, and is fully prepared for our liberal heads to explode when she reveals this news. Well Sarah our heads are still on, no worries there, but you are making our hearts bleed.

GENDER WARS: Okay, women didn’t really win everything or even get to see the earth at night. But there’s this guy, Marcus Buckingham, over at HuffPo who wrote a nice article to let us know that feminism’s won because now men are just like women. He makes a few valid points, but in general doesn’t make sense and therefore Bitch breaks it all down for you: “Aha! So what Buckingham is saying is that since now a whopping 42 percent of men think that they should be the primary breadwinners and women should be the primary homemakers that somehow men are turning into women. What if 42 percent of white people believed we should overturn Brown v. Board of Education? Would signify a “win” for civil rights activists because barely half of white people thought that integration was a tolerable notion?” Just FYI, he also talks about how Zac Efron is the new face of actors. I don’t know why this is indicative of men anywhere because Zacquisha is clearly a lesbian. (@bitch)

DOUBLE X: Jezebel asks Do We Need Websites For Women? and answers, “because of these possibilities, women’s blogs aren’t just blogs for women. They’re blogs about issues that affect women — issues as various as reproductive rights, healthcare reform, world affairs, and yes, Battlestar Galactica — for anyone who happens to read about them.” See Double X is folding back into Slate. We think we need more good women’s blogs, but Double X never found a way to prove it was anything besides an experiment in feministing + jezebel ’cause it only distanced itself from jezebel by criticizing it, not by demonstrating a specific difference from it or bettering it at its own game. (@jezebel)

TARGET WOMEN: But don’t worry,when a SCARY MAN BREAKS INTO YOUR HOUSE YOU ARE SAFE! Sarah Haskins breaks it all down for you:

SEX APPEAL: Women should wear clothes that bare 40 per cent of their flesh to maximise their chances of attracting men, new scientific research indicates. God I am so glad that this doesn’t apply to me, where’s my hoodie. (@the west australian)

MONEY: We’ve got even more proof that the gay storm is not coming! Since India decriminalized homosexuality in July, gay-oriented businesses have sprung up across the country. And who’s going to argue against all that money? (@business)