In the past few months, this non-athletic human has surprised herself and become a runner.

Sports were always an intimidating endeavor for me. They were defined by unnecessarily mean little league softball coaches who informed me of things like, “My grandmother could swing the bat harder than you!” and high school gym where they made me take off my glasses to wear safety goggles during mandatory floor hockey, when I played defense against the offense comprised of my classmates on the football team. I was convinced to run cross-country in eighth grade, and I came in last in every race. I could never wait for these activities to end. I would much rather have been reading a book. 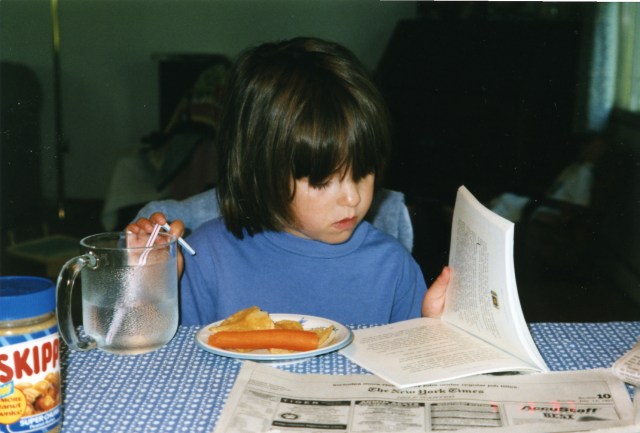 Why would I possibly want to play any sports when I could instead read this riveting chapter book?

I cast off sports, especially running, as “not my thing,” and mostly took to ignoring them. I was frustrated that I wasn’t athletic, but I had no idea how or where to begin. I tried individual things once in a while – bouts of going to the gym, stints with yoga, a couple of epic bike rides, some solid hikes. They all seemed to require major investments of gear, time, or money before I could do them seriously, but it didn’t make sense to make the major investments if I didn’t already do them seriously.

I owned my non-athlete identity right into college, ignoring the rugby team’s invitations to first year women to join, “no experience necessary,” and rolling my eyes at my roommate’s new-found love of frisbee.

Then one day, during one of my gym phases, it was hot. The walk to the gym seemed long. So I decided to run, and was surprised to find out that I actually could do it. I got to the gym in record time.

It wasn’t the real beginning of my running, but it planted the seed. Running to the gym that day, I felt alive in a way that I never had in yoga or in a session at the gym. I surprised myself.

I began to question why I thought that I couldn’t run before. Why had I dismissed sporty things, while so many around me embraced them? I uncovered a heap of fears about my body and ideas about its limitations that I had developed while growing up with a very sick mom. Hidden beneath my scorn of athletics were a bunch of worries about not being physically able to do things.

I decided it was time to try to trust my body and see what it would be capable of. An experienced runner friend helped me create a plan to start.

Now, with 2014 arriving in a second, I am about to start training for a major running endeavor. In April, I will run way further than I’ve ever run – more than twice as far as I ran today. Here’s what I’ve learned about running in 2013 to carry me into this next phase:

I like running because I get to watch my body grow stronger and more capable. I am really, really proud of what my body is doing. I wasn’t as fast as those girls I ran and played with in my earlier years, and assumed I never could be. Now I don’t compare myself to anyone, which is why I’m not telling you how far or how fast I go. Those numbers make me proud, and they are a reflection of me. Wow! That’s my body making it happen!

These are my running feet!

2. Sometimes when you fall, you can get up and keep going and it’s awesome.

Today, when I was almost done with my run, I was feeling tired and suddenly my foot caught on the pavement. I was down. My knees hurt beneath my running tights, but I was fine. I got back on my feet, flashed a thumbs up to the car that had been driving by, and continued on. A new wave of adrenaline pumped through my veins and propelled me through the end of my run. 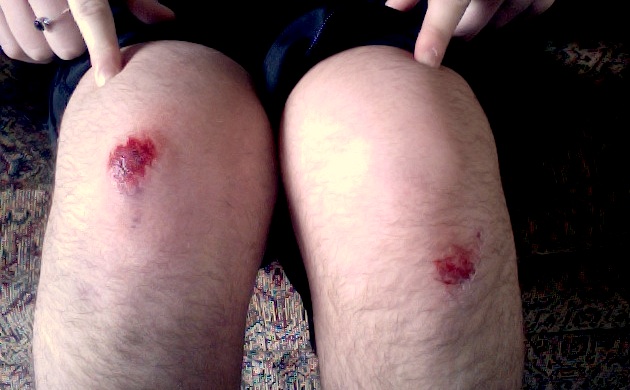 Wow, what a badass.

3. Sometimes when you fall, you can’t keep going. Or you could, but you shouldn’t.

This summer, I was running with my iPod (an older Nano with pointy corners – this is foreshadowing) in my hand. I wasn’t even a full song into my run (it was “Drove Me Wild” by Tegan and Sara), and I tripped. I put my hands out to break my fall, and I watched as the corner of my iPod buried itself in the palm of my hand. I bounced up. My legs were fine, but upon closer examination, I discovered that I could see layers of skin in my hand that I had never seen before. Though I could have kept running with blood dripping down my hand, skin open to the world, I decided to turn back and go to the emergency room, because sometimes you need to abandon your running plans to take care of your body.

And see, look: I needed stitches. 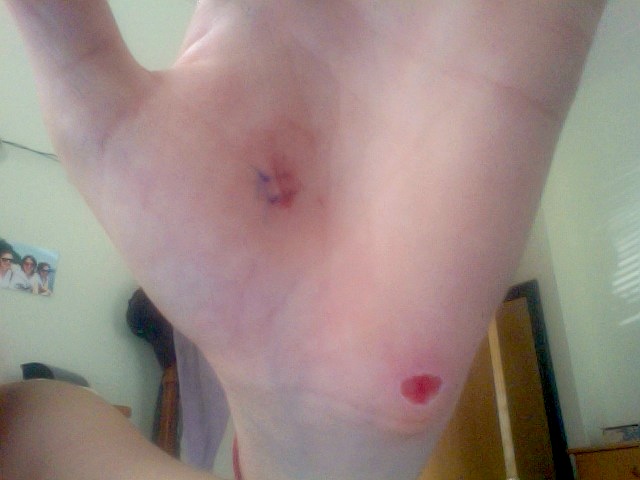 Skin is so weird.

Some runs are going to be shitty. It’s just true. Maybe I didn’t sleep well the night before. Maybe I didn’t drink enough water in the few hours leading up to it, and now I have a cramp. Maybe I drank too much, and I have to pee the whole time I’m running. Often, if I push through (sometimes I don’t, and that’s ok, too), I have to give myself encouragement. Maybe I’ll just yell, “YEAH!!!” into the woods or neighborhood. Or maybe I’ll yell how much further I have to go – “ONE! MORE! MILE!!!”

5. Have a routine, but keep it interesting.

Part of what I really like about running is that it isn’t particularly complicated. I put on my running clothes, pull up my running playlist and run on the same trails by my house. It helps me keep my pacing consistent and it also helps me zone out, so I’m not constantly asking myself, “Ok, how much farther? How much longer?”

As I keep running further and longer than before, I add new songs to my playlist, and new pieces on my route. I explore new streets and paths. I recently added a bunch of Tegan and Sara collaborations to my running playlist. “Every Chance We Get We Run,” their collaboration with David Guetta and Alesso is an obvious ideal addition to a running playlist. 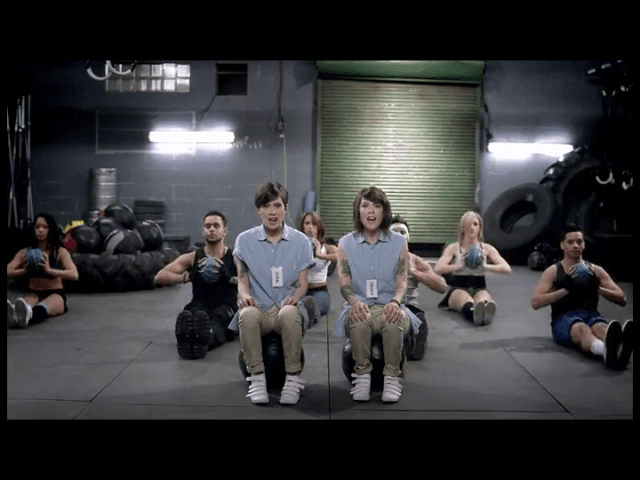 It’s fun to pretend you’re a backup dancer in the “Body Work” video. via amazon.com

6. Take care of yourself, and ask for help when you need it.

Hydration, nutrition and stretching are real things. Also, while it’s important to push yourself to meet new goals, it’s also important not to go to far too fast. Running can be really hard on the body. A few weeks ago, the top of one of my feet really hurt, and I dismissed it until it was hard to walk. I went to the doctor, and he told me to use an elliptical to run on it for two weeks. I did that, and the pain went away. Magic! 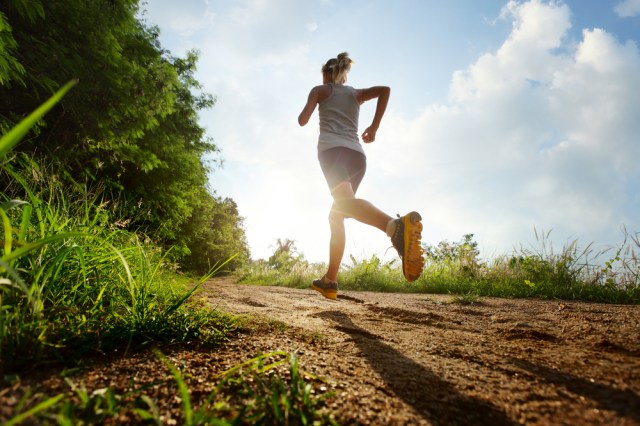 What a powerful human! via shutterstock.com

I ran so much further today than I ever would have imagined I could!