If you were on a certain part of the Internet around 2015, Rowan Blanchard’s reputation might precede her. At age 14, the then-Disney Channel star wrote an essay on the importance of intersectional feminism which went viral, and wrote regularly for Rookie magazine. She gave a speech on feminism and gender equality at the UN Women and US National Committee’s annual conference that same year, as a member of #TeamHeForShe, which Emma Watson also lead. Time magazine named her one of the most influential teens of 2015. Suddenly, she was looked to as an activist, incredibly poised, articulate and ready to shake things up. That spotlight hasn’t been without its pressures, causing Rowan to state in interviews that she had to reevaluate the role of social media and that form of online activism in her life.

As Paige, the lead in Hulu’s new queer rom-com Crush, which releases on Friday, Blanchard plays a slightly awkward high schooler who is struggling with her application to a summer arts program. She’s witty and funny with her friends, but hopelessly tongue-tied around her crush, and Blanchard delivers both tones — and everything in between — with clear-eyed precision. In person (on Zoom) Blanchard seems less like a figurehead and a lot more like most smart, composed twenty-year-olds you know. Joining me from the floor where she was sitting next to the WiFi box, with still-wet hair from her morning shower, she still has an air of effortless cool. She’s thoughtful and self-assured, but also prone to grasping for her words while speaking and, as far as I can tell, loves a good placement of the f-word.

You know how when you walk by a group of teens in public somewhere, you kind of hope they look at you and think “that’s a cool person”? Despite my best efforts, that was definitely the vibe of my chat with her!

Analyssa: Oh, thank you. It’s a cover for the fact that I didn’t get to wash my hair this morning.

Rowan: My hair is still wet, it’s been wet in all these interviews.

Analyssa: That was my other option, I was like if I shower I could have wet hair or I can just throw this little scarf over it. So I’m glad you like it.

So the first question’s kind of a big one. You’ve been publicly out as queer since you were 14. You came out on Twitter and it became this whole thing about, I feel, your persona in the media — I was wondering what it feels like to be playing an out gay character at this point in your life so many years later.

Rowan: I mean, honestly, it doesn’t feel different from playing my other characters — I think that’s what I like about the movie. That it’s not like… it doesn’t feel like she’s defined by this part of her identity, which is probably one of the least interesting things about her. And about me, honestly [laughs].

I don’t know, I really was attracted to the movie because it feels like it’s just about Paige and her friends and her mom and her school and her crush. It doesn’t feel like it’s about ⁠— I don’t feel like I was setting out to be making a gay thing. It doesn’t… my identity in real life is not… it doesn’t inform my career choices necessarily.

Analyssa: I think that’s something we’ve heard a bunch about Crush — and that I thought, too!  — it’s like being gay for Paige and for all the people in the movie who are queer… it’s part of who they are but it’s not the leading characteristic.

Analyssa: It’s just about a movie about people who are gay.

Yeah, like what, it’s a “straight comedy”? It’s a “straight rom-com”? No. Nobody would ever say that…  To me it’s like, a funny movie. And if it wasn’t funny, and it was still gay, I wouldn’t have wanted to do it.

Rowan: Yeah, and I’ve been so hesitant when talking about the movie, it just doesn’t… I don’t use the word “gay” or “queer”  or anything to describe it honestly, because I really don’t want straight people to think it’s not for them, too. I just want it to be, like, a comedy movie.

Analyssa: Well, and because we don’t really assign like “straight” to the beginning of a rom-com if it’s a straight rom-com, I guess.

Rowan: Yeah, like what, it’s a “straight comedy”? It’s a “straight rom-com”? No. Nobody would ever say that. So I’m just like, yeah. To me it’s like, a funny movie. And if it wasn’t funny, and it was still gay, I wouldn’t have wanted to do it [laughs]. Crush being gay was way less important to me than it being funny.

Analyssa: So much of the movie’s humor and heart relies on banter between the cast —

Analyssa: Especially between Paige and her mom, Paige and AJ, Paige and her friends. Could you just talk about finding those rhythms with your castmates, what it was like on set?

Rowan: Well that was what attracted me about the script also, was how conversational a lot of things felt. It felt like a really good jumping point for improv on set and a really easy way to build chemistry when the characters relate to each other on the page so naturally. I had so much fun improving with fucking Megan [Mullally, who plays Paige’s mom], who is just everything.

Analyssa: I mean she was iconic every time she’s on screen! You’re just like “Yeah, you’re crushing.”

Rowan: She’s just amazing… and she’s so amazing to work with. And I was so happy that I got to say that she’s my mom in the movie. Yeah, I had so much fun improving with Tyler [Alvarez, who play’s Paige’s best friend]. Tyler and me had a really amazing time improving. Tyler and Teala [Dunn]’s improv is iconic in the movie. We just wanted to make everything feel and sound really natural. We all felt, I feel like, dedicated to that. 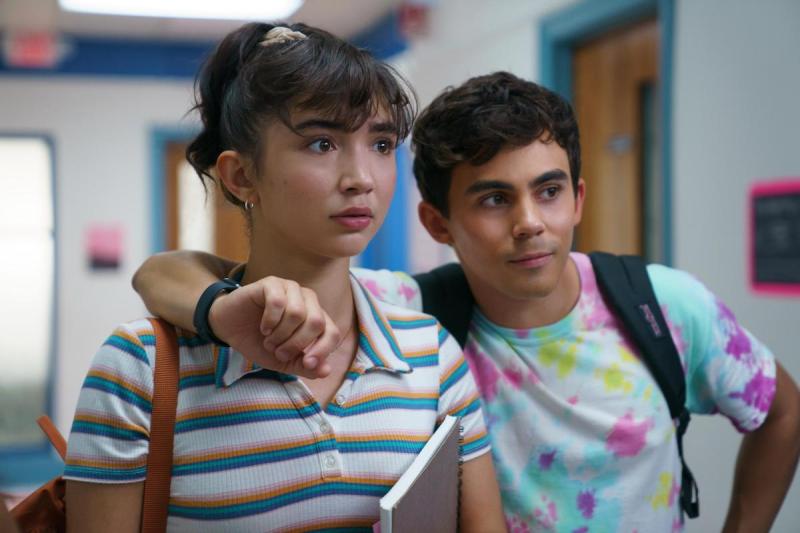 Analyssa: One theme that runs through both of those things is that all of the quote unquote “gay” humor feels really baked in, too. Like it’s just how these people all talk, because this is just part of their lives. It’s jokes about being a top or bottom right next to jokes about eating a whole pie, or whatever things they’re chatting about.

Rowan: It just feels, yeah it just feels so not… everything just feels a part of the world of Paige. It doesn’t feel like we were trying to comment on anything. At least for me, I wasn’t. That is so… yeah, I appreciate that it all feels just genuine to the character.

Analyssa: The big thing in this movie is that Paige decides to run track to impress her crush and then later pulls off this huge romantic gesture. Have you ever done anything out of character in pursuit of love yourself?

Rowan: God, well I feel like there’s that horrible, horrible part of when you like somebody — I mean I haven’t done this in a minute! — but like, we’re all guilty of this, where like they’ll talk about a band and maybe you don’t really know the band that well but you want to be a fan of the band so you just kind of go with it that you know them.

Rowan: Yeah. Out of character, though? Ummm… well, if I liked somebody who was a track star in real life, I can promise you, I would not learn how to run track for that person. So yeah I dunno, guess it depends on what thing.

Analyssa: Yeah, running track for me is a bridge too far! I’d go to all the track meets. I’d pretend I knew what was going on.

Rowan: Yeah, see, I started being homeschooled in the seventh grade so I don’t… this was my first track meet.

Rowan: Wow, I haven’t seen that in so long!

Analyssa: I hadn’t seen it in forever either, and it just does a funny version of that where you know, she’s like “I love The Smiths,” and so he starts playing it as his desk like, every day, hoping that she’ll walk by and notice?

Analyssa: And I just remembered that at a job I had one time, I walked by the desk of a girl that I had a crush on, and she was like “it’s so nice when you walk by singing.” Like, I was singing to myself as I walked by. And then every time I walked by her desk, if she was sitting there I was like “I’m gonna sing a song to myself.” [laughs]

Analyssa: It’s really very embarrassing to think about now, though.

Rowan: I don’t think that’s embarrassing, I think that’s really fucking cute. Like that’s different, than like, pretending to be a track star. That was just something that came from you. You know?

Analyssa: Sure, but I probably wouldn’t —

Rowan: That’s so cute, though!

Analyssa: I probably wouldn’t have done it so much if she’d never said anything about it. Okay, since we’re talking about not having that sort of classic high school experience, do you have a favorite high school comedy movie? I feel like Crush pays homage to so many classics. There were so many scenes that I was like “that’s like similar or playing on or doing something different than a movie I’ve seen and loved.”

Crush premieres on Hulu this Friday. Earlier this week, I also talked with Rowan’s co-star, Auli’i Cravalho, about the movie.

Analyssa has written 42 articles for us.