In honor of the fact that we have some truly precious perks (that you can get right here as a way to get something cute with your donation to Autostraddle) the Autostraddle team got together and recalled the very first gay things we saw within the electric void in which we do our daily work — the internet. Every one of our perks counts toward our fundraiser goal, too! It’s a win, win, win! (You, us and the people who get to be in your glorious be-perked presence.) So while we celebrate just how darn gay the internet has been since its birth, we hope you’ll help us keep it gay by supporting our fundraiser. We’re fundraising to make it through January 2022, and it’s true, Autostraddle would not still be here without the support of readers like you. 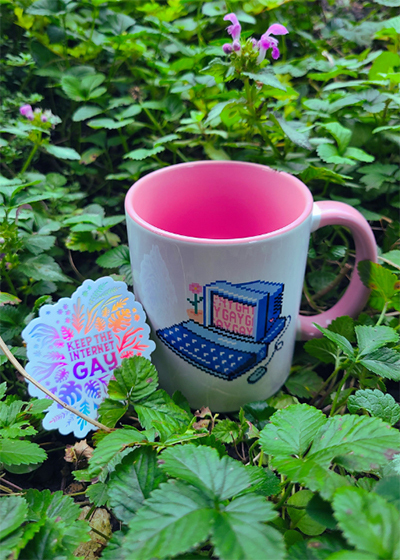 The very first gay thing I saw on the internet was…uh…oh wow hmm. This is embarrassing, but I think it was the fan page for The Rocky Horror Picture Show run by Sal Piro. That was also the first queer media I intentinally consumed when I was 12. (Thanks, VH1 Movies That Rock!) It messed me up in a mostly good way that only became problematic once I was a little older and had, you know, perspective. Eesh. This prompt is making me realize that I did most of my pre-coming out work the old fashioned way, with books from the local college library, The Puppy Episode of Ellen, and staring down my own internalized biphobia silently. My first post-being out gay internet experience was definitely, definitely some various feminist and bisexual communities on Livejournal. Lucky for you, I locked down my Livejournal, but kept a screenshot of my profile page and I seem to have been actively involved in “fufeminism” and had a very long list of interests that included such embarrasing gems as: alabama slammers, anti-bras, bandanas, butches, community service, cult movies, fishnets, global thinking, hummus, literary criticism, musical soundtracks, napping, pacifism, power femme, purple roses, queer theory, sandalwood, self-depricating humor, the vagina monologues, tiger lilies, tim curry, tofu, transliberation, veganism, women’s studies, writing. I really defined my online brand and ran with a cool crowd on Livejournal.

I was the first gay thing I saw on the Internet. Let me explain: several members of my fifth grade class created a GeoCities page titled, “Ro White Is A [gay slur]”. An anonymous student sent me the page over AOL Instant Messenger. This was one of many bullying tactics I encountered that year, but it was the first time that my tormentors used that particular slur. I didn’t know what it meant, and there’s a good chance that some of my bullies didn’t know either. It was a word that kids flung at anyone who seemed too weird, too smart, too fragile or too shy. I looked it up, probably by asking Jeeves. The definition was the second gay thing I saw on the Internet.

Later that year, I created my own GeoCities page. Unsurprisingly, my website was a fan page dedicated to the Broadway musical Cats. So I guess that’s the third gay thing I saw online.

It’s honestly hard for me to recall what the EXACT first thing was, because I’ve been extremely online for what feels like my entire life, and it turns out the internet is a pretty gay place. But I’m gonna go with the rainbow paintbrush on Neopets, which despite being rainbow is not really gay in and of itself in my mind. Rather, my DEDICATION to trying to get the rainbow paintbrush was the thing that was gay. I was ready to give my life to my pet Lupe. I would do whatever it took to get him the coveted rainbow paintbrush!!!! I was clearly destined to become a Pet Gay. Also my username was topangaisdabomb6 out of reverence for, yes, Topanga Lawrence from Boy Meets World, so my overall Neopets presence screamed closeted angst. I reeeeally encountered Gay Internet Content™ shortly after though when I joined The WB’s official message boards and compulsively read Smallville/Charmed crossover fic and also participated in Charmed RPGs as Piper.

I also do not fully know what was the first gay thing I saw. Likely, it was some reference to “homosexuality” on some witchcraft site / forum or other, which was what I usually haunted in the early days of the internet. None of those are especially memorable because they would have been moments in passing, mentions of gayness, usually focused on cis men. Whenever I came across anything like that, I’d just stare for a long time like that would make the very sparse reference to all of queerness mean more, but you know, it didn’t help. It just told me I was obsessed with gay stuff. I think a close second might have also been a Willow / Tara Geocities fansite. I can still picture the red, glittering rose GIFs, twinkling, crackling with queer early internet energy. Finally, I have a very distinct memory of looking up the word “lesbian” because I had a crush on a (presumed straight) friend. Maybe I asked Jeeves? I don’t remember. What I DO remember is that I found a website that defined a lesbian as “a woman who is attracted to women who are also attracted to women.” To which I was like — I don’t qualify! I like straight girls! What do you call that?!? (It was a different time!) I have never been able to find this website again, so it must have not made it, which is fine. ANYWAY I sure am glad Autostraddle is out there for the queers of today, with all our actually accurate information, guides, roundtables — you name it. I still miss an internet that had more glittering GIFs in it, though.

The first gay thing I saw on the internet was me googling “katherine moennig”.

Haruka + Michiru! Sailor Moon was SO formative in my life when it first started airing in the U.S., back when I was just in elementary school. My sisters and I became so obsessed with it and trafficked the fan sites regularly when our family got a computer and dial-up. For years the U.S. release was stuck on an episode in the middle of the Rini season, and we wanted so badly to know what happened next. So of course, we turned to the internet to find out: the two lesbian scouts get introduced in the very next season, and it’s a few seasons later where we get the story of the trans Starlights. Reading about the original Sailor Moon on fan sites really opened my eyes to a whole world of viewing gender and sexuality in ways that literally did not exist in any other part of my life. (I stopped watching the dub before they committed the travesty of making Haruka and Michiru “cousins.”) Sailor Moon and all the internet fandom around it also introduced me to a world of anime, some of which also experiments with and subverts gender and relationships far more than anything else I had ever seen or read. I look back on all of this now with a much more nuanced and inquisitive lens (for instance, I’m really not sure how to feel about the Starlights and the different ways their genders are portrayed in the anime and in the manga), but I know for a fact that I would not be me and I would not be here today were it not for the early internet Sailor Moon fandom.

Anyway, we’re both gay now. So.

The first gay thing I saw on the internet was that clip from Set It Off with Queen Latifah and her girlfriend on the hood of that car. It was very early in the internet’s days of existing, earlier than YouTube, early like AOL and getting a second phone line ’cause it was still dial-up. I thought I was having a literal heart attack watching that ten-second clip. My heart was racing, my chest was on fire, I was short of breath. I watched the clip over, and over, and over, and then Set It Off became the first gay movie I rented at Blockbuster. I shoved the DVD onto the counter sandwiched between Varsity Blues and Toy Story 2. I don’t know where the clip came from. I don’t know what site or message board it was on. I could never find it again, no matter how many times I asked Jeeves about it. Probably a good thing anyway. It took like ten minutes for a video of that size to load and I’d have been watching it every day.