After literally hiring Jughead to find out who shot her father, Veronica Lodge decides at the end of Riverdale’s delightful noir tribute, “The Red Dahlia,” that she actually doesn’t care to know who it was anymore. “Forget it, Jughead,” she says. “It’s Riverdale.”

She of course meant the town, but she might as well have been talking about the show. Whether intentional or not, it’s a hilariously meta line that speaks to this show’s increasingly outrageous plotting issues. It almost doesn’t matter who shot Hiram, because it could have been anyone. Riverdale bends characters and their motivations at the whims of the story. It’s starting to fall into dangerous How To Get Away With Murder waters in its implication that anyone can be bad and do bad things. “No one’s innocent in crime town,” Jughead muses in his voiceovers, which are the most thematically and stylistically relevant they’ve ever been in this episode because of its noir setup. But if no one’s innocent, if we don’t even care who’s doing murders now, then where are we supposed to go?

And that’s not even the main critique I want to delve into this week, so let’s get the nuts and (Natalie) Bolt(t)s out of the way, shall we? To its credit, “The Red Dahlia” answers a lot of questions — so many that I will now list those reveals in bullet point form:

+ Clifford was dead before he hung himself, killed by PUFFERFISH POISON. Penelope Blossom pretty much confesses to doing this.

+ Penelope Blossom also pretty much confesses to killing Claudius. According to her, she only kills bad men, so it’s fine. (Sounds fine to me.)

+ Claudius was running a Fizzle Rocks side business at the Blossom Maple Farms and dumping the run-off into Sweetwater River, which is why Riverdale started having a mass seizure problem.

+ Hiram Lodge has a mistress played by Mark Consuelos’ real-life wife and certified Mommi, Kelly Ripa. She is a water inspector who faked a report on the water to cover up the run-off situation.

+ Sheriff Minetta is alive and having an affair with Hermione Lodge.

+ Hermione Lodge hired FP to shoot Hiram Lodge and FP was more than down to do it because he blames Hiram for what happened to Jughead on Riot Night.

+ Hermione Lodge wants Hiram Lodge out of the picture so she can sell his drug operation for profit. She’s also mad at him for almost killing her and their daughter on multiple occasions.

+ Archie is maybe an alcoholic now.

+ But Archie and Hiram have a truce now.

Anyway, now that we’ve gotten all that out of the way, here’s what I want to actually talk about, and it should come to no surprise: Cheryl and Toni. Where have Cheryl and Toni been all season? Yes, they’re technically there, burglarizing houses and (rightfully) questioning Jughead’s judgement and being intimidatingly hot in the background. But where are they really? When was the last time they got any semblance of character development? I love the film noir style of “The Red Dahlia,” because I love film noir. You know what I don’t love about mainstream film noir as a genre? Historically, despite the fact that the genre often dabbles in queer camp aesthetics, it remains very heteronormative in its storytelling. (The Wachowski’s Bound is a brilliant but rare exception.)

Here, Riverdale has an opportunity to play with tropes of the genre in a convention-bending way, and it just doesn’t. Everyone fits into neat little pre-packaged categories (Betty as the hardboiled detective is much more compelling than Jughead, at least). Riverdale squanders the opportunity for a queer film noir, relegating Cheryl and Toni to the same peripheral space they’ve existed in all season. Yes, the show has a lot of characters to balance, and yes, it’s always going to focus the most on the core four. But I’m not asking for a full episode centered on Cheryl Blossom. I just think it’s starting to seem like the Riverdale writers had no idea what to do with these two characters once they finally acted on their sexual tension.

And that’s often the problem with a will-they/won’t-they setup. The character development and relationship writing needs to be strong enough to sustain beyond the initial yearning. Cheryl and Toni weren’t will-they/won’t-they for very long, but that period was infinitely more exhilarating than the time since they’ve been together. Every glance and touch burst with that young, queer love excitement, made even more exciting by the fact that we didn’t yet know about Cheryl’s queerness.

Cheryl’s coming out arc was hasty but still pretty well done (until we got to that whole gay conversion camp thing). But that was really the last time we saw any depth to this character, and that’s bananas, almost as if Riverdale is saying that the most interesting thing a queer character can do is come out of the closet. Look, I think coming-out arcs are very important. We’re nowhere close to being at a point where television stories about young queers coming out seem redundant or irrelevant. More please! But coming out is just one part of being queer, and it’s also not something that’s close-ended. 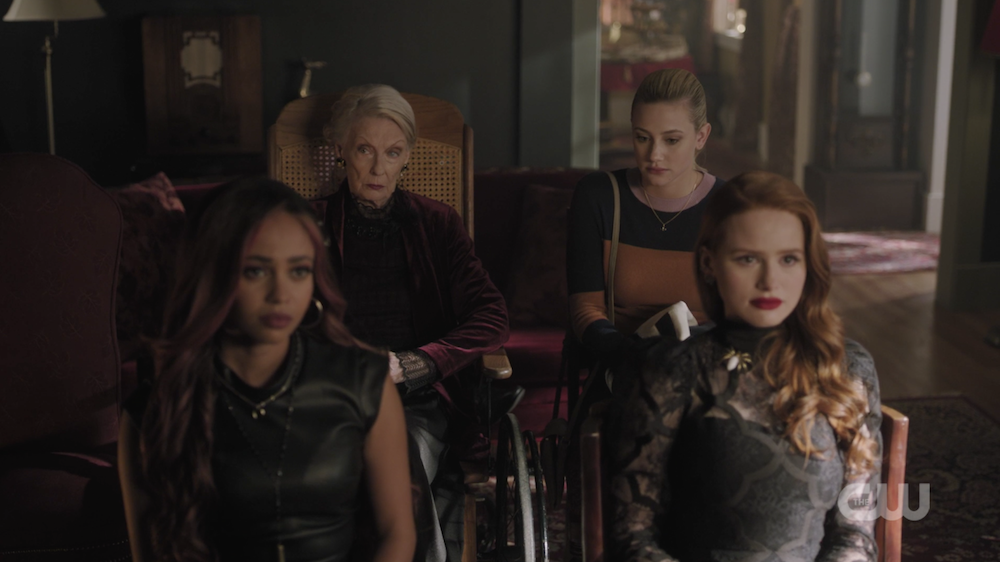 Ahhh, yes, the camera is literally focused on Betty while Toni and Cheryl are blurred in what is one of their only scenes of this episode — what a metaphor!

But the thing is: I’m not even demanding that Riverdale serve us more queer storylines!!! That would be lovely!! And I do think a real opportunity was wasted with this whole film noir sitch by making it so dang hetero!! But I’m mostly just saying that it would be nice for Cheryl and Toni to have…just any character development whatsoever or a storyline that doesn’t entirely hinge on Archie or Jughead. And if their whole thing is just going to be that they’re in love and together all the time, then at least make their love scenes as steamy as Archie and Veronica’s have been allowed to be?

Running out of steam after the initial build-up to their relationship is just such an unfortunate turn of events. Why make Vanessa Morgan a series regular this season if you’re barely going to use her? Charles Melton has had a hell of a lot more to do as Reggie, especially in recent weeks. Maybe instead of introducing a bunch of new relationships (including two affairs?!), we could focus on an existing one that also happens to seem like the healthiest one? Just an idea!!!