Welcome to Autostraddle Riverdale recaps!!!!! Whew, what a week to start with. “There Will Be Blood” is one of the biggest, wildest episodes the show has done in a while. And almost every character is a part of it, but the writers impressively weave between characters here, never losing control, reiterating just how tied up in each other’s drama everyone is in this dysfunctional, beautiful town. So let’s dive into the thick of it, shall we? 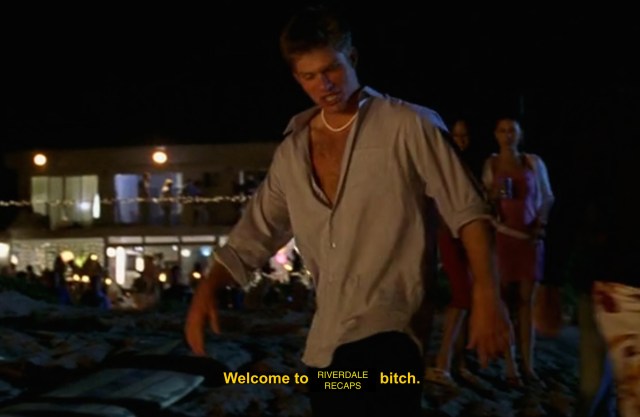 There’s going to be a special election for mayor, and Hiram Lodge wants Fred Andrews to run. That makes total sense on Hiram’s part: The Andrews boys are easy to control, making them ideal soldiers in the Lodge Masterplan. But Fred’s willingness to run is a bit of a stretch. He knows the Lodges are bad news, and yet he seems to forget that entirely for the course of this episode. The fact that Archie is more suspicious than Fred just doesn’t entirely check out.

But this mayoral election business pushes Archie and Veronica to a tipping point in their VERY WEIRD RELATIONSHIP. Archie has just been blindly trusting that the Lodges really are doing something good and worthwhile by buying up a bunch of property in Riverdale, even though there are approximately a million red flags. Veronica seems pretty chill with manipulating Archie and Fred… until she suddenly isn’t and tells her mom she wants out of the puppeteering game, to which Hermione responds with some sexist bullshit about how the men are the gangsters and the women are the behind-the-scenes manipulators or something like that. So much of Riverdale seems to be about the younger generation trying so hard to not make the same choices as their parents that they end up overcorrecting and falling right back into the same mistakes as their parents. By the end, Fred Andrews is out and Hermione is in for the run for mayor, and seeing Veronica just steps behind her mother at the podium is a striking image. As Veronica might say herself, the Swarovski crystal apple doesn’t far fall from the tree.

After so many off-screen conversations about what the Lodges have been up to this whole time, it’s very satisfying that “There Will Be Blood” finally gives us the truth head-on. I’ve assumed Hiram was up to some sort of luxury housing development plan, but as it turns out, he’s much more evil than a gentrifier. Hiram wants to build a massive, for-profit private prison in Riverdale. That makes a lot more sense. I didn’t really think there was a market for pricey condos in Riverdale, so housing for prison workers indeed seems more lucrative. And it also makes sense why the plan has been so secret. Because it’s straight-up evil! I had been starting to convince myself that maybe the Lodges weren’t so bad after all, and then they drop this bomb. A for-profit prison is one of the most evil things a person can build, and it seems absurd that Archie is totally on board, but then again, he’s Archie. He doesn’t have the best judgement. And he’s malleable enough to become convinced that there’s an upside to something as depraved as for-profit prisons. I’m more surprised that Veronica is so on board, but I’m also holding onto hope that this is all building to an ultimate betrayal on her part. She has shown flickers of doubt along the way. 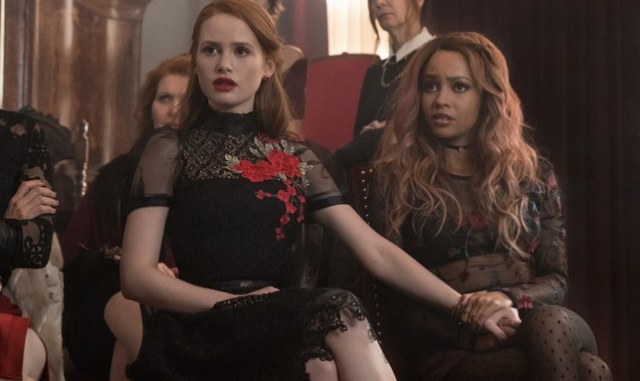 As you can see, they are already sharing a closet, which is Lesbian Third Base

Let’s jump over to the Riverdale content we’re all here for: CHERYL BLOSSOM AND TONI TOPAZ. When we last saw these two, Cheryl was confessing her deeply repressed crush on her childhood friend Heather, and Toni was telling Cheryl she’s sensational. Now, they’re seemingly inseparable? Cheryl invites Toni to her father’s public will reading, which is apparently a thing? Is it? I’m fine with Riverdale just totally pretending ridiculous things are real, because I am thoroughly convinced that the show exists outside of the space-time continuum (which is why I was unnerved by all the Love, Simon product placement last week — I don’t like anything that roots this show in our realm!). Anyway, regardless of whether public will readings are something that exist past the 1900s, I’m on-board. Cheryl and Toni get real flirty in Cheryl’s bedroom beforehand, and Cheryl somehow makes the word “augmented” incredibly sexy. Penelope tries to bust in and stop the flirting in its tracks, but there’s no stopping the connection between these two that is growing stronger by the second.

At the public will reading, Toni clasps Cheryl’s hands in both of hers (what I like to call a Leia/Holdo Handhold) as they wait to hear what Cheryl’s inheritance might be. According to Clifford Blossom’s will, half of his money should be split between Jason and Cheryl, and the other half should be divvied up between anyone who can prove they have Blossom blood. That’s a sort of weird caveat to throw into his will considering the fact that he knew the Coopers were of Blossom blood and hated the Coopers. But it does catalyze some really satisfying Cooper drama and warrants a classic Alice Cooper interruption. She bursts into the room and reads everyone for filth, but especially Hal, who earlier in the episode asked her for a divorce. Hal’s main purpose on this show is to be dragged by Alice. She also announces that she has hired Sierra McCoy as her lawyer, keeping the McCoys in play even though she isn’t mayor anymore. 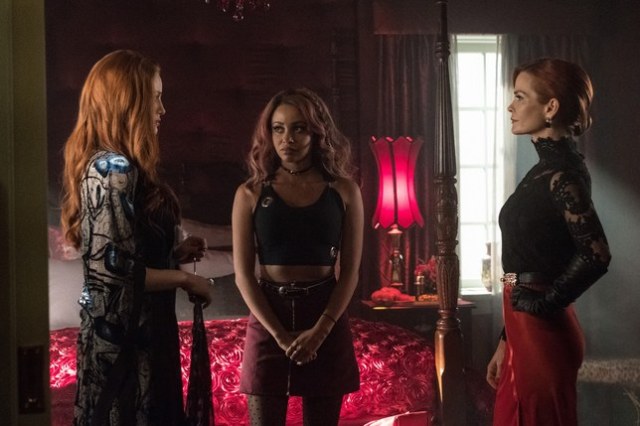 Penelope can’t stop the bisexual energy humming in this scene

Alice isn’t the only one who dramatically interrupts the will reading. When Cheryl stands up to talk about how she wants to end the Blossom cycle of violence, Clifford Blossom himself STRUTS INTO HIS OWN WILL READING.

Well, maybe not. The man who causes Cheryl to faint in slow-motion claims to be Claudius Blossom, the long-lost twin brother of Clifford. Look, it is canon that the Blossom bloodline is riddled with twins, so this isn’t necessarily the most shocking of twists, but it’s pulled off well. So much about this episode is just so fun, playing to the cast’s strengths and bringing all the major threads of this season together organically in a way that’s particular to this show. In other words, it’s strong storytelling but it’s also extra as hell.

“Claudius” “Blossom” explains why he disappeared for so long with this tale: On Clifford’s and his 14th birthday, Clifford pointed a gun at him and said that in the long history of Blossom twins, one twin always meets a violent end, often at the hands of the other. Clifford spared him, but Claudius ran away from home, never to return — until now. This Blossom twin curse makes for wonderful mythology. While Riverdale has never crossed into explicitly supernatural territory (and I don’t think it ever will despite its upcoming Sabrina spinoff), it has always shared DNA with folklore. It’s a fairytale rooted in reality: Its villain is waging war on the kingdom by secretly building a for-profit prison. And everyone else has a role to play in the familiar narrative, but Riverdale also plays with our expectations when it comes to those roles.

Like with Betty Cooper, who is more dark knight than princess. After Clifford’s will reading, Polly is eager to prove their Blossom blood and claim their money, but Chic isn’t. Betty is immediately suspicious, as she should be, so she sneaks into Chic’s bathroom and steals some floss. We don’t know the exact results of the DNA test she has done without his permission, but she makes it clear that Chic has been lying about his identity in some way. My money has been on him being FP’s son rather than Hal’s, but I suppose we’ll have to wait for a real answer.

We also never get explicit confirmation that Claudius is who he says he is. It’s hinted that he could actually be Clifford, which would mean one twin staged his own suicide and actually killed his own brother. That would be a supremely dark twist, but remember: Clifford Blossom shot his own son point blank. The show has already gone there, and if Clifford Blossom really does walk this earth, no one is safe. Yes, this episode of Riverdale has its fun, but it’s also sinister throughout, the Lodge, Blossom, Cooper, and Andrews families all thrown into chaos.

Other things to note: Kevin tries to help Betty by soliciting her brother online. Jughead and FP team up for some classic father-son Lodge sabotage. Smithers betrays the Lodges by slipping Jughead some information. Jughead also finally learns to value people over the story and declines to publish the truth about Hiram owning the diner in order to protect Pop. Toni seemingly lives at Thistlehouse now. Hiram and Archie are blood brothers? Polly is “driving West” (“maybe to San Francisco?”), which is, you know, a chill thing a single mother of twin infants with no job can just do. How much money are they getting from the Clifford will anyway? Who knows! Who cares? Money, like time and weather, does not really exist in the doomed town of Riverdale.

Kayla has written 409 articles for us.