In a perfect example of how this campaign is becoming an elementary-school-style cry for attention, many Americans’ evenings were recently rudely interrupted when they were texted anti-gay and anti-Obama messages. Tuesday night, D.C residents were going about their lives, free from thoughts such as, “Gosh, why won’t the Republican party text me already?”  Unfortunately, to spread hatred on a more intimate level, a company linked to former Republican Virginia State candidate Jason Flanary thought it could help Romney win by sending citizens messages such as “Re-electing Obama puts medicare at risk” and “Obama supports same-sex marriages.” The 13-year-old daughter of New York Times reporter Jonathan Weisman even received a text which read, “Obama denies support to babies who survive abortion. Obama is just wrong”. Rather than explain how these text messages are lies, full of false assumptions (many Americans support same-sex marriages) and in horrifying bad taste (I’m sure there’s a section in Miss Manners on how old men should not text 13-year-old girls about abortions), the real issue in this text scandal is the lack of transparency. 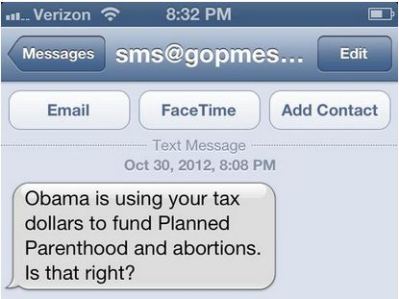 When residents tried to text a response, they weren’t able to. They also had no immediate way of telling who the messages were coming from because the sender was disguised under pseudonyms such as “슠sms@gopmessage.com,” “슠sms@aicett.com,” and finally, “&#8216;SMS@Aicett.Com.” It took some digging to figure out that the spam was linked to a company called ccAdvertising, which is in turn linked to Republican Jason Flanary who unsuccessfully (no surprise there) ran for Senate in Virginia last year. According to CBS news:

WHOIS, an Internet protocol that provides the name of any website’s owner unless he or she pays for anonymity, on Wednesday showed that voteett.com – suspended for ‘spam and abuse’ – is registered to Jason Flanary and managed by a Centreville, Va., company called ccAdvertising. Flanary is the chief operating officer of ccAdvertising, which according to the company’s website provides robo-calls to ‘commercial, Political, Congressional and non-profit clients.

Unfortunately in America if you have enough money you can potentially hire a group of people to make a PSA ad that says, “Obama Farts,” and it will be played on television to a soundtrack of scary music. This is because in 2010 a Supreme Court ruling determined that corporations, unions, and third-party interests groups are “people” entitled to spend as much money as they want to get a political message across. The only silver lining is that information must be given on who exactly is paying for the ad. “Paid for by the hypothetical Coalition against Obama and Farts” would have to be included at the end of the aforementioned nonsensical ad.

More than 800 million dollars have been spent on advertising so far this election season. It seems a bit ridiculous to fund an ad tying Obama to Fidel Castro and Hugo Chavez instead of, say, funding a citizen’s hospital visit; but at least the names of the advertisers are out in the public. It’s not much, but it’s a start. If your day is going to be rudely interrupted by lies and nonsense, you want to know where it’s coming from. 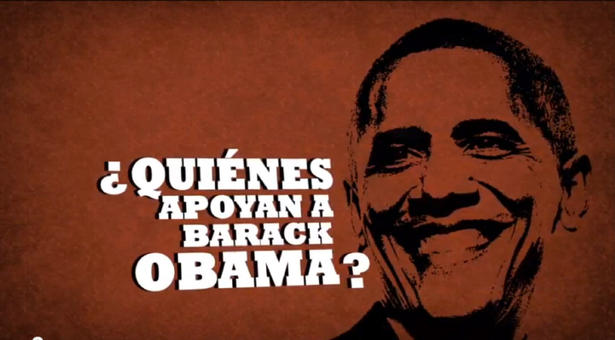 According to The Atlantic, the texters avoided the illegality of non-transparency of distributing unsolicited messages by using an email addresses to send the texts. The domain names of the sender were registered, but blocked; but obviously not blocked that well. It makes me wonder what the point of the messages was. Did Flanary really how to persuade voters with information from a mysterious source? He seems to have wanted so desperately to make some noise that he forgot to think about his actions.

Of course, for the unlucky recipients of anti-gay and anti-Obama text messages on Tuesday, the lack of information regarding the sender was frustrating. But  the good news is it’s unlikely the texts have harmed Obama. Michigan State University’s advertising expert Richard Cole believes that at this point in the campaign, instead of being persuaded by them, Americans are just tuning attack ads out:

We’ve reached the point now where people’s minds are pretty much made up and whoever is left, you have to conclude, is pretty much mindless. Once the decision takes hold, more and more people just put their hands over their ears and shout, ‘I don’t want to hear about it’ over the ads.

He also went on to explain that of the world’s 175 democracies, the United States is alone in allowing so much influence from non-democratic sources: “Frankly, I’m embarrassed, knowing that the people of Canada and elsewhere must be scratching their heads at how much we’ve allowed money to take hold.” 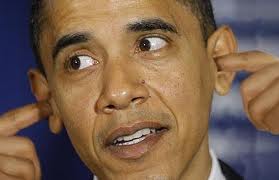 While Team Obama spent most of its budget this summer, Team Romney has saved up for a grand finale attack. I hate to say it, but this last week of campaigning, the noise is only going to get worse.  But like with an annoying stupid classmate, if you just ignore his or her noise and draw pictures of dragons in the margins of your notebook, sooner or later, you’ll feel at peace.