One thing that no one seemed to ever tire of doing as a response to the recession was play the game of who had it worst — the term “he-cession” comes to mind. While that may not be a particularly productive conversation, it is true that economic inequalities exist, and that people who are marginalized socially often also experience the bottom of the economic ladder. For instance, according to the (relatively) recent report from Half in Ten, which (among many other useful and interesting things!) details the specific ways in which LGBT couples and families are economically worse off than their straight counterparts. 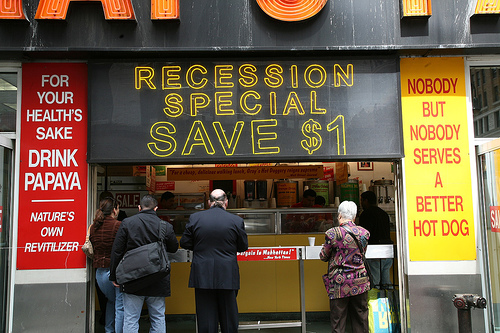 Half in Ten is an organization which aims to cut poverty levels in America in half over the next ten years, and in the process of doing so is making information available about how bad poverty levels actually are right now. In their report from the end of 2011, “Restoring Shared Prosperity: Strategies to Cut Poverty and Expand Economic Growth,” they’ve included a section on how poverty impacts the LGBT community, and the facts are pretty eye-opening. Among their findings:

+ Transgender individuals have high unemployment rates, low incomes, high poverty rates, and high rates of homelessness. While little data is available on the wages of transgender people, between 22 percent and 64 percent of transgender people reported annual earnings of less than $25,000 in sample surveys.

The recession hit everyone hard, but there are some groups who had less of an economic support system to fall back on when jobs and money became scarce — like queers, or trans people, or people of color, and people who identify as more than one of those things. In some ways, these findings are consistent with those for straight people in the same situation — given the gendered wage gap, of course an unmarried woman (because marriage between two women isn’t federally recognized, so lesbian couples are “unmarried”) over the age of 65 would be more likely to be living in poverty. These gaps in income in wealth would certainly be reduced if, say, DOMA were repealed, and same-sex couples were entitled to the same legal and tax rights as straight married couples.

On the other hand, though, there are economic hardships particular to our community, and those might take longer to go away. It’s much harder to get a job, especially in this economy, if you’re gender-nonconforming, or “too butch,” or trans. There are states, like Michigan, where you can legally be fired for no reason other than being gay. There are plenty of other states where it may not be legal, but it may also not be easy to prosecute, especially if you’re a broke queer who can’t afford to sue. If a queer person loses their job, there usually aren’t benefits provided for their partner or children unless they’re biologically related or second-parent adopted. If we can’t get health insurance for our families because our families aren’t recognized as real, we have to pay out of pocket with money we don’t have. And perhaps most significantly, many of us don’t have our families to fall back on — during a time when people were moving back in with their parents or relying on them for extra money in droves, many queer people aren’t welcome in their parents’ houses, at least not with their partners or families. And if our parents have disowned us or refuse to support us financially, we’re also left without the inheritances and trust funds that many straight people count on. And when our lives are this financially unstable, we’re often totally unable to save and invest — which is what would enable us to create wealth, which is what would keep our children from being twice as likely to be poor as the children of our straight counterparts.

200,000 new jobs were created in December, and the unemployment rate is lower than it was months ago, if only slightly. It seems possible that while we may not be in the middle of an economic recovery, we might be seeing the beginnings of one. But while there’s some contention over whether the recession affected everyone “equally,” we also have to remember that there are some groups that may not come out of the recession equally on their feet, especially if a factor in their economic inequality is social marginalization. Unless America also manages a recovery of its values of equal rights and freedom for all, it may be a while until some of us see economic justice.