And in a way that we’ve never quite seen before in the US’s political history, women are at the center of our political discourse. 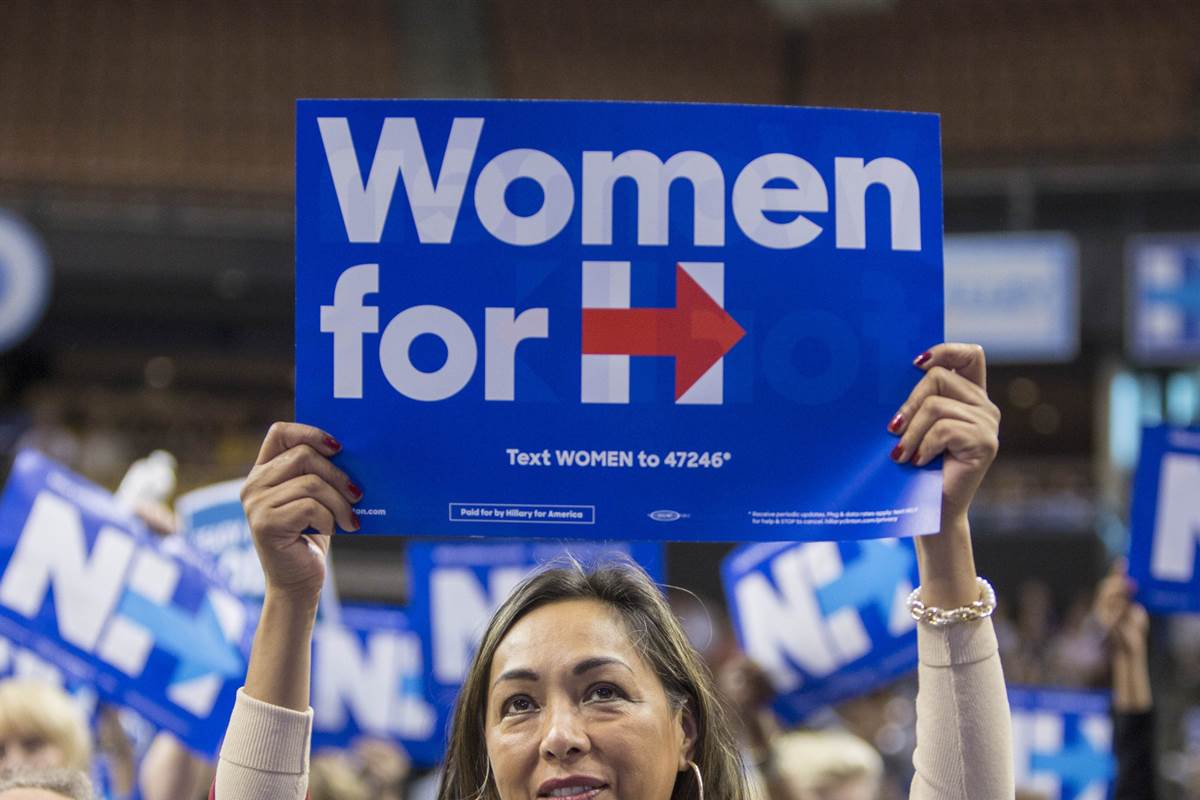 Some of the ways in which gender politics are finally impacting actual politics have manifested through the traditional means: voting and talking points. Women voters are moving away from Donald Trump, including women on the right, and Hillary Clinton is largely pulling them all in. The gender gap in the upcoming presidential election could be the largest in history. We already know that women have consistently shaped the outcomes of various elections — most notably, the 2012 election, in which women voters as a bloc single-handedly decided the fate of the nation between a President Obama and a President Romney. And this year, in an election some could say is “very important because Donald Trump can never be president,” women will have truly unprecedented influence on the outcome.

And all along the campaign trail, both Hillary Clinton and Donald Trump have shown that they are remarkably aware of the ways in which the 19th amendment will shape the election. The fact that Clinton has embraced this fact, leaning into talking about women’s issues explicitly, while Trump has decided to use it as lighter fluid for the dumpster fire that is his campaign is another point entirely, and one too obvious to warrant a post. Both candidates are talking about gender, whether it’s because they’re putting women and babies down at rallies or thanking young women for being the bright future of the world.

We’ve explored together the ways in which women lead different political lives than men. We all mostly have a working knowledge of the things that come immediately to mind as “women’s issues” — reproductive rights, parental leave, etc. But that isn’t all women voters pay attention to. Instead, the  voting gender gap is shaped by myriad issues that run the gamut from climate change to gun reform to national security.

In a feat of analysis never done before, Ms. crunched numbers on the gender gap and spoke to experts in the realm of politics and feminism for a recent report on how women will shape the 2016 election. In that feature, they spotlight the issues women voters put first: the economy and workplace issues, equality and equal representation, abortion and health care, LGBT rights (thanks ladies!), sexual violence, the environment and renewable energy, and national security. It’s also been noted that women voters are more invested than men in issues of education, gun control, and — duh — lady stuff like childcare. It isn’t shocking, then, that in a political landscape where more women than men are expected to turn out and most of them hate Donald Trump so fucking much, these issues sound awfully familiar. But what’s harder to grasp is how revolutionary this turn of events truly is.

When I spent twelve hours of my life watching political advertisements from the dawn of time to analyze the way women were portrayed in them, what stood out to me was that women’s faces and voices and bodies were present in the political discourse of their eras, but their issues weren’t. Instead, women were props — innocent faces to threaten with nuclear war, kind housewives to sing to you about a man who was gee golly gosh darn such a good choice for the Oval Office, and emotional wrecks talking about the pain of mismanaged political battles. Women were there to convey a point crafted by men, for men, and targeted toward other men. Women were never the voters in question — they were merely the messengers for the “actual voters,” imagined, of course, to be men.

How times have changed.

At the center of this marked shift, too, is a woman herself. Hillary Rodham Clinton came out of the gate in the primary season putting the issues that shape the gender gap — and reflect a growing feminist praxis among voters — first and foremost. She embraced running as openly female, rejecting campaigning as “one of the boys” and instead set forth with a new purpose: women to the front. She gave a spotlight specifically to the mothers of Black Americans shot by police. She came out aggressively in support of gun control, with one-woman-revolution Erica Smegielski leading that fight for her on the campaign trail in honor of her mother, who died at the Sandy Hook massacre. She’s carved out policies on labor rights that center around equal pay, paid family leave, and raising the minimum wage. She’s come out swinging in support of affordable, high-quality childcare. She actually says the word “abortion” and refuses to let politics trump women’s healthcare.

This election has been shaped by Clinton’s campaign at least as much as Trump’s trainwreck of one. She’s aggressively capitalized on her gender by positioning it not as a side note, or even a historic anecdote waiting to happen, but instead as a tangible asset than shifts her ability to lead. And in the process of doing so, Clinton’s campaign has forced Trump’s to play along — you may remember Ivanka’s surprisingly female-focused introduction of her father just a short while ago.

Donald Trump, too, has addressed abortion. (In short: “Nah, bruh.”) He released a shitty economic plan and then had his wife talk about women’s rights as workers, too, which was awkward since her own employees don’t get maternity leave. He has talked about guns, too. (Remember when he tried to convince people to use them to shoot Hillary Clinton or whatever?) And he’s definitely giving the whole “I like people of color and LGBT people, too, I promise,” thing a run for its money, albeit while also fucking it up every step of the way.

Somewhere in there, in the middle of this wet hot American mess, is the true revolution of this election. Many of us have pinned our hopes for a first woman president on this election, and understandably so. Electing a woman president would be fine and dandy, and I’m not sure how well you know me but I’d be pretty fucking into it, JSYK. Electing a woman president would mean finally shattering one of the highest glass ceilings in the nation’s history. It would mean putting a woman at the head of a power structure that, for centuries, has been a symbol of masculine force across the globe. It would mean finally watching a woman run the country and run shit all over the world, and it wold also mean watching me cry a lot of happy tears for probably a long time if not the rest of my life.

But Hillary Clinton’s truly revolutionary candidacy has already left a mark. In running, in embracing her gender, in centering women and the issues that women voters put first, Hillary Clinton’s campaign has broken new ground in our political system. Our conversations are no longer solely built on the premise of the male voter. Our political discourse is more inclusive than ever. At every level of the circus that is a presidential election and the government of the United States of America, women are not only being seen, but being truly heard. For the first time, women are explicitly at the core of a battle for the heart of the country.

I’ve said it before and I’ll say it again, albeit for a different reason: Voting for women isn’t enough. Voting for women isn’t what makes politics change overnight into a realm women feel truly prepared for or comfortable in or, damn it, safe in. Electing women is truly and deeply important for this country. We need more women in office and we need more women in politics. But changing the culture — the sexism that permeates our every waking minute as women and the boys’ clubs that push us out of the world of politics and policy — is what truly matters.

And by shaping a national discourse around a presidential election around the issues that drive women voters to the polls, Hillary Clinton is doing her damnedest to get both done at once.