When women won the right to vote in America, they changed the entire political and cultural landscape that surrounded their lives. Although it didn’t happen overnight, that victory ultimately gave women the leverage to take some solid swings at the sexist power structures that kept them out of public affairs; although it didn’t happen overnight, women’s suffrage was the first step in creating one of the most powerful voting blocs in America.

The “Gender Gap” in elections is a term that refers to the differences in voting patterns by women and men en masse. In other words, the “gender gap” represents the difference between who men voted for and who women voted for.

And it’s nothing to take lightly.

In 2016, women could play a pivotal role in electing the president. It wouldn’t be the first time: Beginning in the mid-60’s, women began harnessing their political power by showing up at the ballot box in tremendous numbers, often outnumbering men and voting in large numbers for candidates who led on women’s issues.

In this lesson, I’m spotlighting five times in which women voters showed up and shaped the results of a presidential election. This is hopefully only the beginning of some of our lessons in this column centered around women’s political history in this country, and these stories don’t even begin to tell the true story of women’s impact on the political system. (But they’re a solid start.)

In what is often a forgotten instance of the gender gap at play, women came out fervently to support Herbert Hoover in the 1928 election — the first time since their suffrage win that women, as a bloc, came together to do so. Hoover, who was known as the “women’s candidate” because of his popularity with female voters (most likely because of his ties with the temperance movement), was besieged by women volunteers for his ’28 campaign, and women registered to vote and then voted him into office in record numbers. He was also endorsed by the National Woman’s Party, and was the only major party candidate in a presidential race to win a feminist group’s endorsement until 1984. 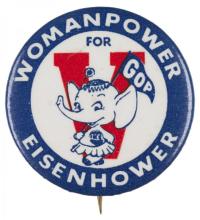 Eisenhower’s 1952 campaign is largely known as the first to practice a concerted effort to attract women voters. His campaign specifically commissioned television, radio, and print ads geared explicitly at women voters leading up the election, and also put women employees on the front lines of recruiting efforts. He ultimately won a majority of women’s votes — and took the election by a landslide. 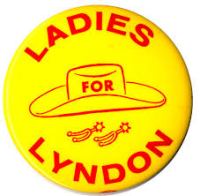 Despite the easily accepted myth that women elected John F. Kennedy because he was a stone cold fox, data shows that women actually voted for Nixon in the 1960 election, which is personally very disappointing if you ask me. But! Four years later, when JFK’s successor Lyndon Johnson ran for re-election, women voters outnumbered men and supported Johnson in large numbers. Johnson won in a landslide, and used his candidacy to expand the role of women in politics. 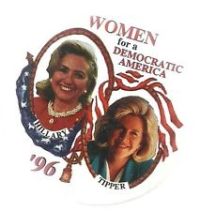 Bill Clinton won in 1992 with the help of the women’s vote, but in 1996 the gender gap helped him make history. That’s because in the ’96 election, Clinton won the presidency despite losing a majority of the male vote. That’s right: Women elected Bill Clinton president in 1996 against the wishes of most men. I’m willing to bet it was all that stuff with the saxophone. That stuff still makes my mom swoon, JSYK. 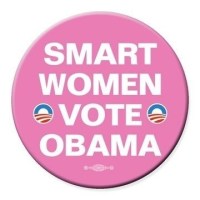 For too long, the face of the “women’s vote” has been that of a white woman. But in 2008, Barack Obama’s race rewrote that script. We’re all probably familiar by now with the fact that women elected Barack Obama, and then re-elected him in 2012. But when we talk about that, we need to be more specific: It’s women of color who elected Barack Obama president in 2008 and then re-elected him in 2012, although the gender gap among white women also grew during those two races. And the political power of women of color as a specific voting bloc is only going to keep growing through the year. (In fact, in 2013 and 2014, 2 million women of color became eligible voters.)

Readings and Resources for This Unit