When I got my review copy of I Must Be Living Twice, the new anthology of Eileen Myles‘ poetry also featuring some previously unpublished work, I figured I’d just read the first six poems — the new ones, that is — and then write something for you right here on this website about it. But that wasn’t how it went. Instead, I devoured the entire book, only to figure out by the end that we are all living twice, and maybe even three or four times, and that each time it sounds like a different set of poems.

At the end of Living Twice, an essay titled “Twice” from a lecture in New York by the poet in 2014 spells out the collection’s title. Within it is a tale of two poems — one now published in Living Twice, one originally from Not Me — that live almost twenty years apart but echo each other. (Both are, broadly, “breakup poems” that capture a feeling of great loss, and encapsulate moments in which the poet “vanished.”) “Is it the same poem?” she asks. “It’s the same life.” 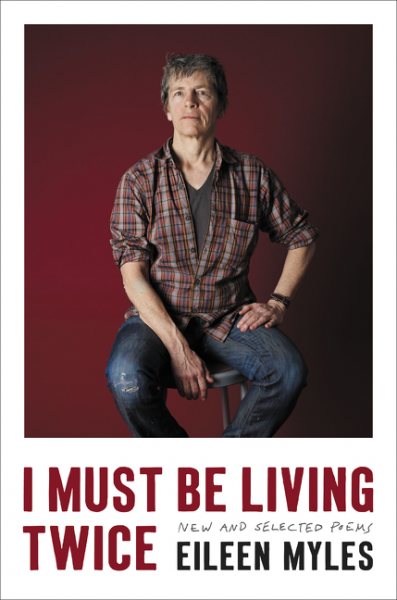 And so it goes with the collection, which spans poetry from 1975 to 2014, pulling from ten books of poems and two collections of new writing to paint a picture of that life, and a prolific and powerful career. Myles’ poems, which have always shed a spectacular light on the everyday in the poet’s world and, thus, in our own, have always been powerful enough to stand alone. But in each book — and now, in this one — there lies a story about where Eileen Myles is.

Every Eileen Myles book, every Eileen Myles poem, is our informal check-in with the poet herself. Is the dog inside? Who did you think of this afternoon? How is the weather? And on and on and on. All those tiny poems and big books, all those hundreds of tiny parts of a life. And now, we have a highlight reel — one that, when it stands alone, allows us to read those tiny poems and get a small sense of those big books and watch her grow each time she goes through something, whether it’s the first or second or third time she’s survived it.

I knew there would be something that connected the poems, and there was: The voice. Eileen Myles’ exquisite language. Her run-on thoughts and intersecting emotions and perfectly fragmented sentences. Her punctuation, or lack thereof. Her sex, her breakups, her coffee pots, her early mornings, her heartache, her bliss, her losses, her triumphs, her ability to look at all the things she is told to herald and spit on them. Her spirit is the single thread that holds her entire life together. It’s the binding on the book.

Within each collection, too, there are through lines. There are the the mentions of flowers in Sappho’s Boat, clouds and the wide open ceiling of the world in Skies, light in School of Fish, all these patterns that seem to melt into each other when there’s fewer words between each repetition and nothing but a page between each book. And once we recognize how all of those themes come together, what all of those things recognize, each of those books and all of the poems in this one become infinitely more layered and important. It’s like only when we stack these words next to each other, only when we read this story from cover to cover, do we realize that all along Eileen has been giving us even more than we realized. Suddenly, the images are even more vivid. The memories are even more connected. And the voice is even more powerful.

With I Must Be Living Twice, Eileen Myles has, at long-last, finally been recognized for all of those things. The collection does more than just exhibit some of her best work; it honors it. It’s a spell bounding, awe-inspiring chunk of a life, and of a career. Samples include “fan favorites” — “Peanut Butter,” “On the Death of Robert Lowell,” and “I always put my pussy…,” which was featured in season two of Transparent — as well as pieces you imagine Myles chose herself, perhaps because she was most proud of them. Many of the books culled for the anthology are books I’ve never read, despite being an avid collector of anything with Myles’ name on it. But sprinkled between poems I remembered from Sorry, Tree or Snowflake / Different Streets or, of course, Skies, were the poems that had slipped away from my memory, and seeing them there promoted me to re-examine them and wonder what meaning they must have had in this great poet’s world, in her career, in her life.

I always feel when I am reading an Eileen Myles poem that I am getting to know her better. And although Living Twice would of course make a great starting point for those who haven’t yet pried into Eileen Myles’ world, it’s also an enthralling and deeper look into her story for those of us who have been attempting to follow it all along.