Hi nerds!  We were thinking today, about your needs, and we decided that some of you could probably use a little poetry in your lives.  We’ve mashed our brains together and made a list (which could never ever be complete enough!) of ten amazing queer ladysexy poets that you should check out right now, if you haven’t already. 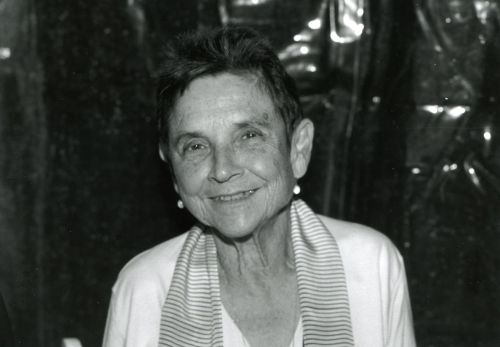 Adrienne Rich is more or less super- famous. She’s a major feminist and queer theorist (“Compulsory Heterosexuality” anyone?) who’s written heaps of non-fiction and poetry books. W.S Merwin said this about Adrienne Rich: “All her life she has been in love with the hope of telling utter truth, and her command of language from the first has been startlingly powerful.”

There come times — perhaps this is one of them —
when we have to take ourselves more seriously or die
when we have to pull back from the incantations,
rhythms we’ve moved to thoughtlessly,
and disenthrall ourselves, bestow
ourselves to silence, or a severer listening, cleansed
of oratory, formulas, choruses, laments, static
crowding the wires. 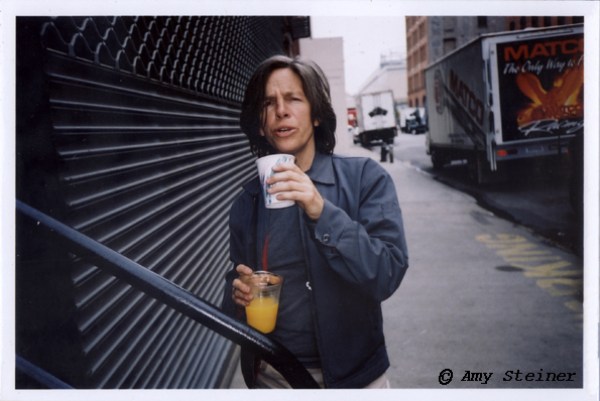 Eileen Myles is “the rock star of modern poetry” (BUST Magazine) and “a cult figure to a generation of post-punk female writer-perfomers” (The New York Times) and we think that means that she’s super-honest and unafraid to get ugly or dirty or otherwise f*cked up. An East Village fixture with a working-class Boston background, she’s worked as Artistic Diretor of the St.Mark’s Poetry project, toured with Sister Spit and performed all around the world including at the Poetry Project, P.S. 122 and the WOW Café. Also she’s published like 15 books and has a “poet’s novel,” INFERNO, coming out this fall. Her memoir Chelsea Girls is one of Emily Gould’s favorites.

Some bits and pieces:

From “For Jordana”:
I think writing
is desire
not a form
of it

From “Dear Andrea”:
I love you too
don’t fuck up my hair
I can’t believe
you almost fisted me
today.
That was great.

From “Him and Others”:
Thoughts. Silly. I’d rather
sink my teeth in your neck,
seriously, knock you down
on the floor — all for love.
You’ll forget my lousy
poems but if I could just
mar you or something. Nothing
nice ever sticks but boy
a scar — If I could ever
really bruise you with
my feelings, them, so infinitely
forgettable & gone.

Get Eileen Myles: Sorry, Tree or Not Me (Native Agents). 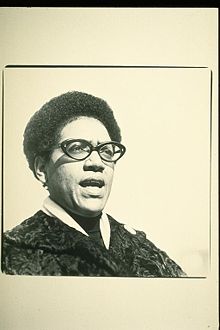 In addition to being a poet, Audre Lorde is a mega-important feminist and activist who was at the forefront of a new group of politically active women of all colors challenging the white middle-class hegemony and subsequent ethnocentric goals of 1960s feminism. Lorde pioneered the concept that racism, sexism and homophobia were linked in that they stemmed from people’s inability to recognize or tolerate difference.

On the topic of art as protest:

“… the question of social protest and art is inseparable for me. I can’t say it is an either-or proposition. Art for art’s sake doesn’t really exist for me. What I saw was wrong, and I had to speak up. I loved poetry, and I loved words. But what was beautiful had to serve the purpose of changing my life, or I would have died. If I cannot air this pain and alter it, I will surely die of it. That’s the beginning of social protest.”

From “Who Said It Was Simple”:

and sit here wondering
which me will survive
all these liberations.

Get yourself some Audre Lorde books now. 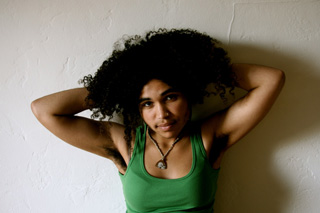 I met Kirya Traber when she toured with Sister Spit in 2009. Aside from being a killer slam poet with years of festivals under her belt, she’s also working as the Residency Program Manager for YouthSpeaks.  Her poems deal with feminism, hair, race and Nina Simone, among other things.

thick and road worn,
dirt stained, jacked up 4 wheeler
truck behind us
one hand
on my mother’s shoulder

I could smell his breath
tobacco plaque tangy
from across the front seat
and even then, I didn’t know
he was talking about me 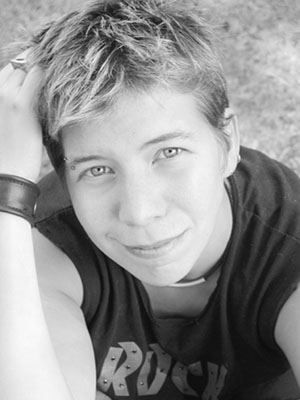 Alix Olson is a spoken word poet / “red-hot, fire-bellied, feminismo-spewin’ volcano.” She tours the world, has been featured in practically every relevant magazine or newspaper and has put out a couple of albums – Built Like That and Independence Meal – that you should buy and eat with your ears. She interviewed Rachel Maddow for Velvet Park magazine, which is really neither here nor there, but I thought you might like to read it.

Harlem born bisexual June Jordan was a Carribbean-American poet, novelist, journalist, biographer, dramatist, teacher and activist with lots of important super-passionate felings about the construction of race, gender, sexuality, politics, war, violence and human rights. She’s one of the most prolific African-American writers of all time with 28 books of varying genres like essays, memoirs, novels, poetry and children’s books. You know how Barack Obama was always saying “we are the ones we’ve been waiting for”? He got it from June Jordan. Or from Alice Walker who got it from June Jordan. You know.

HAY HOLLER BISXEXUALS, she’s got some words about y’all: “If you are free, you are not predictable and you are not controllable. To my mind, that is the keenly positive, politicizing significance of bisexual affirmation… to insist upon the equal validity of all the components of social/sexual complexity.”

Read this interview with June Jordan at BOMB Magazine about “I Was Looking at the Ceiling and Then I Saw the Sky,” an experimental contemporary opera made in collaboration with composer John Adams and director Peter Sellars, that tells the stories of “men and women in Los Angeles struggling to find and articulate love in the midst of moral and physical devastation, tragedy, and upheaval . . . Like all of her work, the opera strives to bear witness to the human ability to survive nightmares of injustice and embrace visions of a more hopeful future.”

This is a first map of territory
I will have to explore as poems,
again and again

My mother murdering me
to have a life of her own

What would I say
(if I could speak about it?)

My father raising me
to be a life that he
owns

What can I say
(in this loneliness) 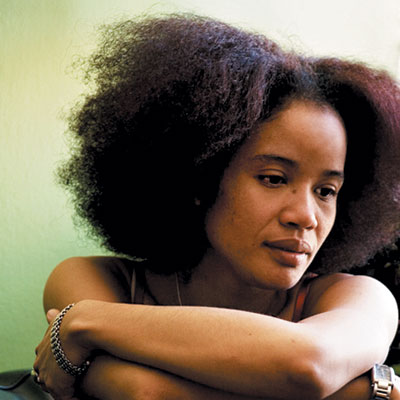 Staceyann Chin grew up in the part of Jamaica where buses full of white tourists don’t go. Her memoir, The Other Side of Paradise, deals with her mother’s rejection of Chin and her brother, and her subsequent struggle to grow up in the face of poverty and a splintered family.

From Publisher’s Weekly:
“[Chin’s mother] quickly foisted them onto other relatives for good, leaving Chin, at age nine, to fend for herself in the shack of her harsh great-aunt whose boys routinely attempted to rape her.”

Chin moved to New York several years ago and is an out lesbian political activist poet womanchild. She writes things like this, which I think you will like: 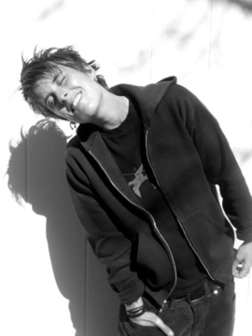 Andrea Gibson is another spoken word American poet and activist. Her latest album, Yellowbird, features a version of one of her most ridiculously moving pieces, “Ashes,” with music from Chris Pureka. Here just watch this:

Jan Heller Levi, who sounds pretty important, said this about Marilyn Hacker which is better than what I might say: “I think of her magnificent virtuosity in the face of all the strictures to be silent, to name her fears and her desires, and in the process, to name ours. Let’s face it, no one writes about lust and lunch like Marilyn Hacker. No one can jump around in two, sometimes even three, languages and come up with poems that speak for those of us who sometimes barely think we can even communicate in one.”

You did say, need me less and I’ll want you more.
I’m still shellshocked at needing anyone,
used to being used to it on my own.
It won’t be me out on the tiles till four-
thirty, while you’re in bed, willing the door
open with your need. You wanted her then,
more. Because you need to, I woke alone
in what’s not yet our room, strewn, though, with your
guitar, shoes, notebook, socks, trousers enjambed
with mine. Half the world was sleeping it off
in every other bed under my roof.
I wish I had a roof over my bed
to pull down on my head when I feel damned
by wanting you so much it looks like need.

Mary Oliver spent a few of her teenage years living in Edna St. Vincent Millay’s old house, helping Millay’s family sort through her old papers, so you know she’s gangsta. Since the early 1960s, Oliver has published heaps of poetry and prose, including American Primitive, which won the Pulitzer prize for poetry in 1984.  Her work is heavily informed by her reflections on her natural surroundings, conjuring up images of her native Ohio and New England; the Harvard Review described her work as an “excellent antidote for the excesses of civilization.”

You do not have to be good.
You do not have to walk on your knees
for a hundred miles through the desert, repenting.
You only have to let the soft animal of your body
love what it loves.
Tell me about despair, yours, and I will tell you mine.
Meanwhile the world goes on.

Riese has written 2828 articles for us.