Okay, let it be known that I love comics and comic books and graphic novels and webcomics. I read a lot of comics on a daily basis, and I fell in love with my girlfriend the moment I found she collected Batwoman. You might say queer comics are the way to my heart. Enter my new love: No Straight Lines: Four Decades of Queer Comics. 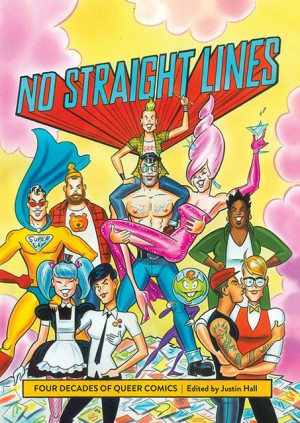 No Straight Lines: Four Decades of Queer Comics, edited by Justin Hall and published by Fantagraphics, is a definitive collection of queer comics through the past four decades. What I love about No Straight Lines is that the comics are the focus, not the editor’s analysis of the graphics and themes. In fact, Justin Hall spends only a few pages briefly describing the history of queer comics (and comix), and the book continues on to 300 pages of high-quality graphics.

No Straight Lines set out to compile and illustrate the uncensored and internal conversation that comics create within the queer community. These comics, and their creators, have analyzed their own communities and their relationship with the broader society in smart, funny, and profound ways.

You know the best part of queer comics? Women, gay and straight, were widely accepted in the movement and held many of the most profound and groundbreaking roles.

Ash wrote a really great introductory post to comics for the ladygays, but No Straight Lines focuses less on popular comics like Marvel, and instead draws together a range of underground comics.

Hall writes in the Editor’s Note:

My first task in putting together No Straight Lines was to create a working definition of queer comics. They are comic books, strips, graphic novels, and webcomics that deal with LGBTQ themes from an insider’s perspective. These works are sometimes created by straight artists and read by straight audiences, but they differentiate themselves from queer representations in mainstream comics by the perspective they evince. In the past, the mainstream never touched LGBTQ characters except in a derogatory or fetishistic fashion; that’s different now in the age of well-rounded lesbian superheroes and sympathetic gay Archie characters. Still, it remains the job of mainstream comics to assimilate LGBTQ characters, while it falls to queer comics to dissect queer identities and examine in more profound ways the queer experience. 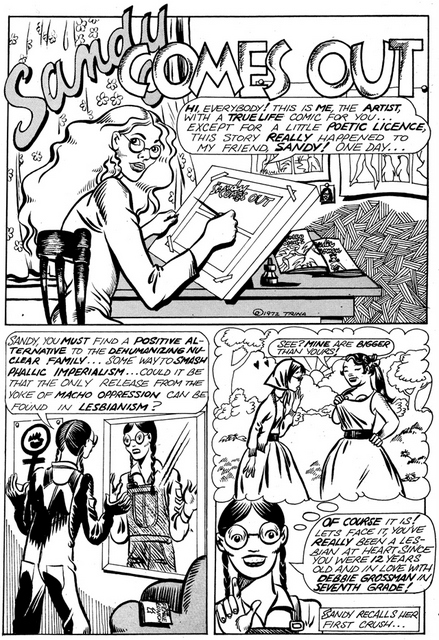 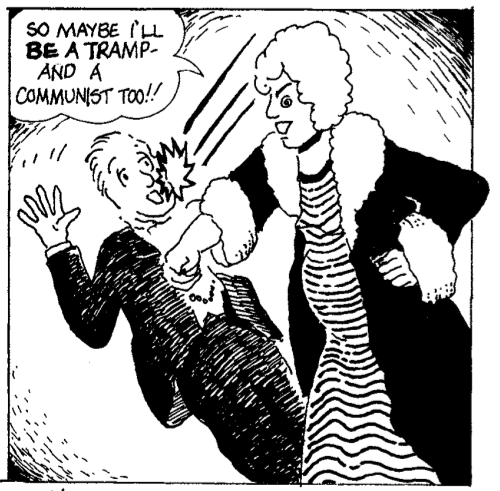 Mary Wings, inspired by Sandy Comes Out, began creating her own comic. She said of Robbins,

In those days of identity politics, only a lesbian could really tell the story of coming out, so I hastened to do a rejoinder to Trina’s story. It was as if Sandy came out, went to the bar, took karate lessons, and that was it. There was an emotional and spiritual side to coming out that wasn’t there.

Wing’s Come Out Comix was the first lesbian comic book. She went on to write lesbian detective novels. Naturally. 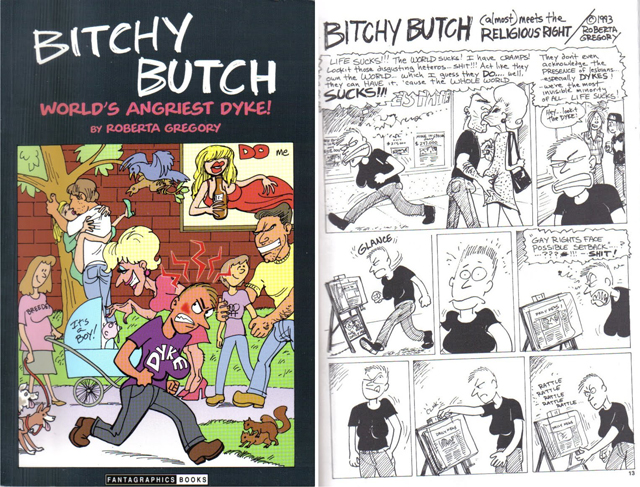 Roberta Gregory created Dynamite Damsels in much the same way, which became the first continuing series self-published by a woman, gay or straight.

The groundbreaking works changed the landscape of LGBTQ comic books, and in the early 1980s, gay newspapers and magazines rose significantly in popularity. One such artist, Alison Bechdel — you might have heard of her, maybe — got her start in 1983 with strips in gay and lesbian newspapers. 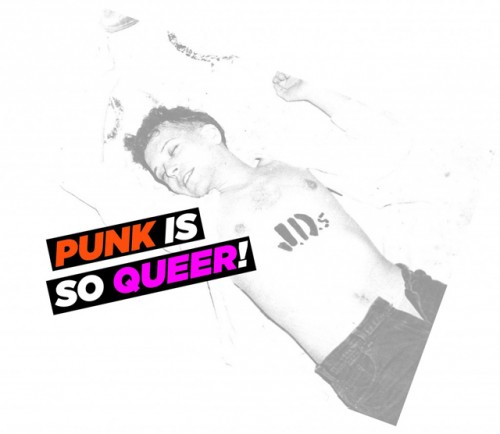 Around the same time, the punk and DIY culture began emerging in the LGBTQ community. This is where low-budget, kind of scrappy comic zines started! J.D.’s, a zine created by G.B. Jones and Bruce LaBruce in 1985, brought the term “homocore” (later changed to “queercore”). Queercore was designed to “piss off the punk mainstream and the establishment gay and lesbian culture.” Queercore aligned itself with third wave feminism and the riot grrl movement by reclaiming derogatory words and phrases, like “bitch,” “dyke,” and “queer.” Queercore also rejected binary gender notions and assimilation to the mainstream.

Diane DiMassa and her subsequently violent yet popular Hothead Paisan: Homicidal Lesbian Terrorist came from this movement, and queer perspectives began to be less concerned with the gay community and unapologetically focused on personal lives and identities.

Angela Bocage said of this movement,

“If gender identities, the realness of girl and boy, are plastic, they can be melted down. Re-shaped. First a re-imagining of the possibilities would be called for… Comics are well suited to these explorations… Comics can show subjective worlds very well.” 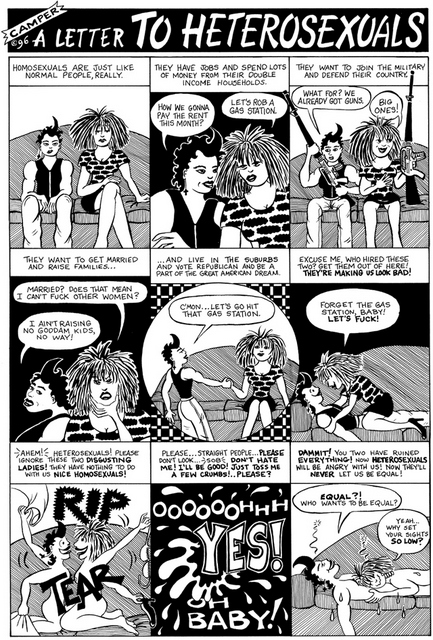 Women cartoonists were particularly changed in this time. The Lesbian Cartoonists Network was formed in 1990, publishing favorites like Girl Frenzy, Dyke’s Delight, and Dyke Strippers. This group also did a good job of aligning veteran lesbian cartoonists like Jennifer Camper and Roberta Gregory with newcomers like Roxxie and Kris Dresden (here is a really funny Kris Dresden comic that is included in the book!). It was the golden age of lesbian comics, indeed.

But maybe NOW is the golden age of lesbian comics. The internet has increased accessibility and interest in LGBTQ comics. No longer are LGBTQ graphic novels and comic strips exiled to the special interest bookshelf or back page of conspicuously LGBTQ literature.

The idea of using the internet as a queer, creative community is such a natural transition for queer comics. Queer comics are no longer stuck in the “queer media ghetto” formed by the gay and lesbian newspaper, bookstore, and publishing industry. On the other hand, that industry is no longer as nurturing to queer cartoonists as it has been in the past, and has developed a very interesting aesthetic of commentary. 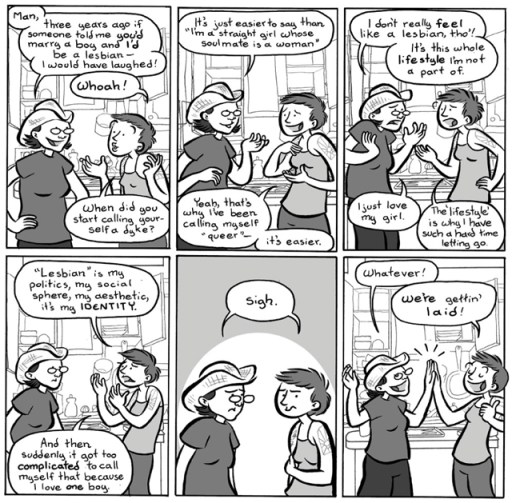 Justin Hall writes in the last lines of the intro of the book:

Queer creators will continue to hold up a fractured, funhouse mirror in which we LGBTQ people can view ourselves and allow others to see us as well. This is the role of the artist and storyteller, the truth teller and the spinner of tall tales. The future is bright, queer, and full of comics.

What No Straight Lines really achieves is putting all of these influential comics in one place. Together, they contextualize each other and the LGBTQ scene at the same time. 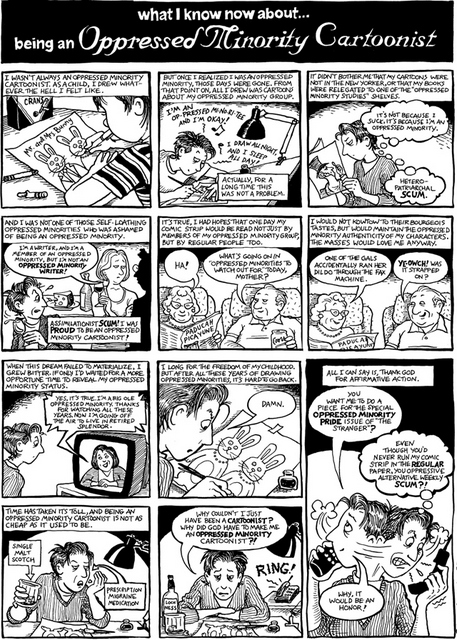 Perhaps it’s because the average person thinks comics are harmless — those colorful pages you read over breakfast on Sunday morning — but the comics in No Straight Lines illustrate some of the more taboo subjects. They normalize the big, mysterious, gay experience in an unassuming way that art, poetry, and queer theory hasn’t quite mastered.

I’d recommend this anthology to anyone interested in comics, the history of the gay rights movement, boobs, and lesbian jokes. Also, there’s a giant penis on page 101. I’m just warning you, because it caught me off-guard.

The tangible book itself is so aesthetically beautiful, with over 300 pages of high-quality illustration, many with full color pages. In a physical and emotional way, I’m really proud of this book and what it represents for our community.

If you’d like a look-through before you buy, there’s pictures and a video on the Fantagraphics website.