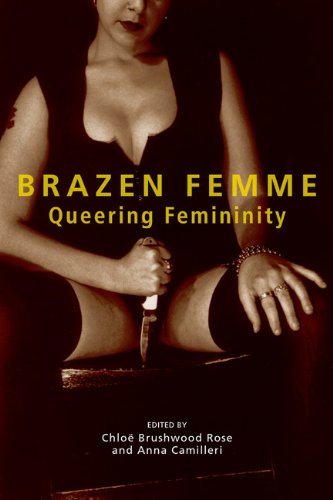 Anyone at all familiar with lesbian culture is at least marginally aware of femme invisibility, and those who have been affected by it – typically those who identify as femme – have also felt ridiculously frustrated.

Enter Brazen Femme: Queering Femininity, an amazing anthology edited by writers Chloë Brushwood Rose and Anna Camilleri that features work centered around the experience of being femme by award-winning authors, poets, artists, and activists; filled with short stories, musings, analytical essays, photographs, comics, and poems, some of which will (probably) make you fucking cry.

Though much has been written on the subjects of sexual and gender identities, far fewer texts examine femme identity on its own terms; femme as an identity that stands alone. Traditionally, when the femme identity is examined at all, it is examined in direct contrast with butch. But while the butch-femme dynamic is indeed an integral part of lesbian culture and history (herstory?), that’s not what readers can expect to find here. Instead, the contributors of Brazen Femme show us identities that are self-containing and independent, identities that define themselves precisely by resisting definition.

One doesn’t have to be a lesbian to be femme. One doesn’t have to be a woman even. As the editors note, femme is not “in one place, in one time, or in one tidy package.” Femme is an attitude, a personality; a way of being that can be embodied by anyone from lesbian girly girls in stilettos to drag queens to straight men in fishnets, where the only constant is the flux.

As such, the collection seeks to “theorize femme identity through description, reflection, and interpretation” rather than provide a set definition.

One noteworthy aspect of this anthology is that it works to encompass as many viewpoints as possible, thus recognizing multiple forms of radical femininity – of “femininity gone wrong.” For those looking to find a how-to manual on the art of femme, you won’t find it here. Nor will you find racy butch-femme erotica or fluttery poetry describing the exquisite pain of corset-lacing and the subversive power of red lipstick.  Femme is aggressive, its contents raw: it examines experiences of the femme identity complicated by the male gaze, by maleness in general, by racism, transsexuality, motherhood, fat and body politics, and institutionalization, just to name a few. However, the book is as artful and beautiful as it is unapologetic and fierce – much like its subject, the femme, it is a “layer of silk over steel skeleton.”

And it succeeds. The book is, for lack of a better word, intense, and unlike most anthologies, it never gets boring; as in, the contents never blend together and end up reading pretty much the same after awhile. Rather, the pieces here are so varied and dynamic, each one so different from the last, that even the most critical reader won’t lost interest.

Among my favorite pieces is “fading femme” by Debra Anderson, a poem that describes the institutionalized femme stripped of her trappings: “I’m losing my colors / cloaked in the faded blue / of hospital property pjs / almost forget the femme in me.” One aspect of the poem that stands out specifically is the interesting and important perspective Anderson offers on makeup: “this ritualized mask-making / not to hide behind / but to put forth;” that the aim of a femme’s makeup is not to cover up the face, but to create the face. It’s a form of performance art. Take that, One Direction.

Other particularly amazing pieces include “Two Poetic Incantations” by Karin Wolf, poems that will make your heart swell with blood, then break it, “Whores and Bitches Who Sleep With Women” by Kathryn Payne, an essay that will change your perspective on sex work, “Summer, or I Want the Rage of Poets to Bleed Guns Speechless with Words” by Anurima Bannerji, an incisive piece that does most of its work when absorbed rather than carefully read, and “Wheels Plus” by Michelle Tea, a short story that evokes the dreamlike ephemeral urgency of youth.

Mila has written 2 articles for us.