Cameron Esposito made a name for herself in Chicago before jean-jacket-jogging to the west coast, where she was named a top comedy act to watch in 2013 . Now in LA, she hosts a weekly stand-up show at Upright Citizens Brigade Theatre called Put Your Hands Together, which has seen the likes of Maria Bamford, Aziz Ansari, and Jenny Slate. Perhaps you read her response to a threesome heckler or caught her on Ferguson, when Jay Leno called her “the future of late night.” Maybe you plan on catching her on the road opening for America’s Sweetheart, Anthony Jeselnik. You could even take it slow by checking out these questions she was nice enough to answer. We talked about the usual comedy stuff. You know, Alex Mack, sweatpants, and Thundercat. 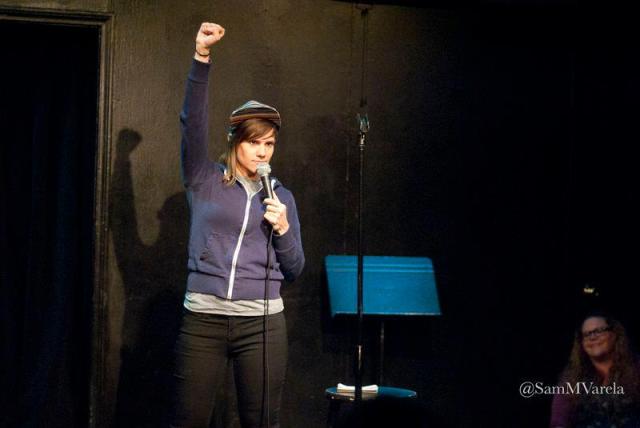 You’ve been quoted saying, “Chicago is a city for standup; LA is a city for comedy, a portion of which is standup.” Besides your podcasts, how do you think you’ve expanded your brand to range beyond that of stand-up comedian?

I’ve been doing some panel spots on TV — like on Chelsea Lately, for instance — and I’ve been doing some writing. I’ve been happy to have some work of mine published by VICE and The Advocate recently. I’m also working to get some television projects of my own off the ground SO KEEP THOSE FINGERS CROSSED THAT THOSE THINGS HAPPEN.

What do you find are the biggest differences between the LA and Chicago comedy scenes?

Chicago has a creative, DIY, community oriented scene. Los Angeles is really about the entertainment industry and plugging stand-up into that network of folks.

As the host of your own show, do you feel compelled to make sure female comedians are well-represented in the line-up?

I try to book the best comics I know and the comics I like the best. I really love watching women tell jokes, so that’s factored into my booking as a taste issue. But also, diversity in any show will make that show stronger. It’s just hard to stay interested in the opinions of 87 straight white dudes in a row. We really try and offer variety in every show because it makes each show better.

Your conversational and story-telling style incorporate a lot of true events and strange situations. Do you consider yourself someone who ‘does things for the story’ or does wacky shit kind of naturally happen to you?

Oh heavens. I mean, I’m a ‘wander around the city on my feet’ kind of gal, but I’m never looking for weirdness. Strange things happen all the time to everyone — I’m just really, unfailingly observant. It makes it hard to ride public transit amidst all the loud mouth noises that I can’t not hear. 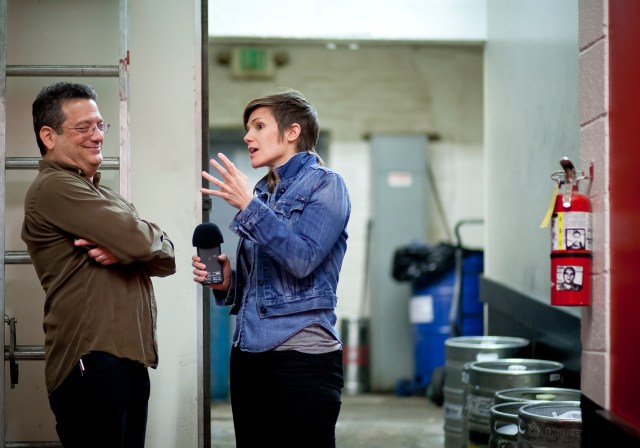 Interviewing Andy Kindler about how to minimize jean on jean friction. He has no clue.

How did you discover your love for denim? Where do you shop for most of your jean items?

It was whispered to me on a stiff denim wind. As to where I get things, that is a doozy. I find it very difficult to find hip, alt, semi-butch clothes that also fit me well and flatter/show-off by bod. It’s a serious undertaking involving trying on every tee and button down in the store and then buying like one thing. I do like Levi’s for quality. I wish they made shirts for gals without massive darts in ’em.

Are you disappointed that your haircut hasn’t caught on in the queer lady community the way, say, the side-shave has?

Wait, it hasn’t? I’m always getting shit about having a predictable haircut, but if my look is unique then I say: step off, ladies! There can only be one half 80’s metal band Thundercat side mullet amongst us. Find your own glory and leave me to mine!

Before taking up stand-up, you were doing improv hardcore. Do you ever miss it?

Not a bit. Stand-up suits me so much better. Plus, I talk to the audience a lot at shows so there is still an improvised element.

By talking about Angela Chase and Alex Mack in your stand-up, I think you’ve already won the hearts of Riese and Intern Grace. If you had to pick one more fictional character to round out that trio, who would it be?

Sarah Connor, as played by Linda Hamilton. Arms. Chin ups. Sunglasses. Motherhood. She is the best humanity has to offer and that’s exactly why we need her help.

What most excites you about touring with Anthony Jeselnik?

Anthony can draw enough to fill giant theater spaces. I cannot – YET! I’m stoked to do all those shows for all those people. Anthony is a real pro and I’m really looking forward to seeing how he handles those spaces and learning from him. 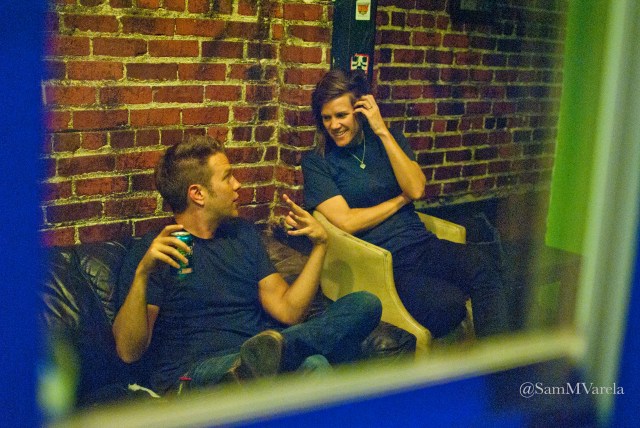 Teasing Jeselnik about buying the exact same shirt before it went on sale. What a dummy.

It’s obvious from your satirical post, “10 Tips for Men Starting Out in Stand-Up,” that you’ve had some pretty dumb advice thrown your way. Still, it seems like there can be helpful advice for women trying to break into a male-dominated field like comedy that isn’t inherently sexist or problematic. Do you have any lady-specific tips?

Do the work. When you are just starting out, it can feel like there is some magic formula to stand-up success and there is: get on stage all the time and fail and learn from that and improve. Especially for women who are such a minority in stand-up. It can feel like other folks around you are getting the rewards of friendship and bookings and community and you are not. None of that matters. You need the respect and admiration of your peers and that doesn’t come from friendship — that comes from work. And if you do the work, and remain open and kind to other comics and support their work, you will find those friendships that you want.

What is your favorite stereotypical lesbian dish? (Mine is BBQ tempeh FYI)

Well I’m a vegetarian and I don’t really drink. I really eat mostly black beans and mangos so it’s all pretty stereotypical around here. But I guess, to really namedrop, I love a good pre-sushi seaweed salad. Such a gorgeous color! And it makes me feel fancy to eat with chopsticks because I am brilliant at using them.

Which character from Orange is the New Black would you be and why?

OF COURSE I WOULD BE ALEX VOSS. Mysterious and glasses and toughness, etc. Stop asking such silly questions!

Ok, here’s a serious one. What’s your favorite pair of sweatpants and if you don’t wear sweatpants, tell me why you hate yourself.

They are black and baggy and say PERFORMING ARTS down one leg. I kidnapped them from an ex a bunch of years ago and, man, she really lost out when I did. It’s the vagueness of PERFORMING ARTS that really keeps me wearing ’em. They aren’t specific about dance or music or comedy. Just general performing. Who would make pants such as these? I have no idea. But they’re mine now and I love them.

Oh no, not at all. Now I put all my love for sci-fi and action movies into my weekly podcast, Wham Bam Pow.

Before you were engaged to fellow comedian, Rhea Butcher, did you date a lot of comedians? Do you have any tips for someone dating a comedian?

Nah, I didn’t date many comics. But, in general, if you are trying to date a comic or just be pals with them I’d say don’t worry about being funny or getting jokes into the conversation. Comics tell jokes for a living and can certainly be funny offstage but many folks seem to think we want to entertain at the bar afterward or at a dinner party or when meeting someone new. Don’t put a comic on the spot and ask ’em to tell a joke interpersonally and don’t get all in your head about needing to be funny to them. Just relax and let’s all talk like humans to one another and let the funny happen organically. 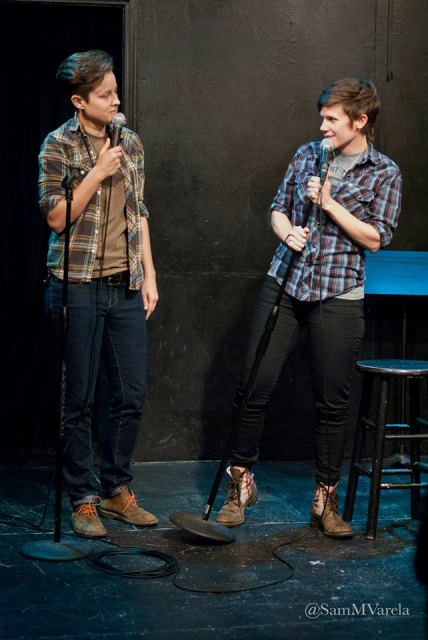 I’d love to shadow Ellen at work for the day, watch a movie with Queen Latifah and have dinner with Wanda Sykes. Can you set that up for me? Thanks.

You can hear spanking new stand-up material from a bunch of folks by subscribing to the Put Your Hands Together podcast, listen to Cameron expound on new sci-fi and action movies on Wham Bam Pow and see her in front of your very own eyes every week at UCB or on tour in various towns. Follow her on Twitter @cameronesposito to keep up with the latest.