June 12, 2016 was a rough day for me. It was my 37th birthday. I don’t have a close relationship with my family and I knew to expect nothing more than a text message from my mom. As the day went on, the birthday wishes from friends soon turned into cries of alarm. The 12th went from being another day my family didn’t care about me to a day my queer family was mourning. The shock and pain from what we were all experiencing as queer people, and more so for those of us as queer people of color, left me with an overwhelming need to be with community. As a Bisexual, Disabled, Cherokee woman I rarely feel as if there are truly welcoming spaces for myself, but the Pulse massacre sent me in search of it and led me to NYC for Pride. The thought of being with community at the site of the modern US queer liberation movement that was birthed and fought for by trans women who said “No more!” to police raids and abuse felt empowering and healing to me.

On June 24, 2016 President Obama designated The Stonewall Inn, and the surrounding 7.7 acres, a national monument. My first reaction was one of overwhelming awe that the site of such an important moment for queer rights in the US was being saved from the potential wrecking ball of land developers and the government’s eminent domain. However, I then began to reflect more on what this meant for us as a community that had just suffered such a massive tragedy, and my feelings changed. This felt like a condescending pat on the head from all-knowing Uncle Sam. Rather then doing the real work of ending violence at the hands of the state, corrective therapy, teen homelessness, mental illness, and the litany of other of issues that plague queer folks, the government instead saved a small plot of land that wasn’t even theirs to begin with. 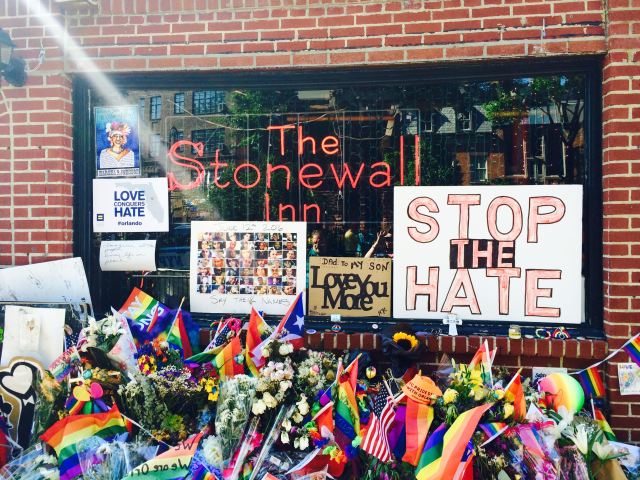 Once I arrived in NYC I headed to the Stonewall Inn. In front of what has been a space of salvation and struggle for so many of us was a vigil to memorialize the lives lost in Orlando and our community. Looking at the faces of the people that were recently killed out of hate was an experience that I am still at a loss for words to describe. It was heartbreaking and chilled me to the bone. The thought many of us have had, “It could have been me,” became even clearer as the revelry of Pride escaped and the bar’s doors were opened to let in the latest round of merriment-seeking queer folks. Surrounding the Stonewall were heavily armed NYPD officers and a news van hoping to catch a story, which only added to the eerie and traumatic nature of the circumstances.

To kick off Pride week, the NYPD announced they would have a special Pride patrol SUV with rainbow decals and the statement “Our heart goes out to Orlando.” This ill-conceived display was their shortsighted way of showing support for the LGBTQ2Spirit community. Meanwhile, they were out in full force in the Village and at Pride events, some with semi-automatic guns. As a Bisexual, Disabled, Native woman this didn’t make me feel safer. The sight of police terrifies me and makes me want to run as fast as my gimpy body will allow. The Lakota People’s Law Project’s Native Lives Matter report states that Native Americans are the racial group most likely to be killed by law enforcement and that Native women are six times more likely to be incarcerated than white women. While the statistics vary, the Ruderman Family Foundation reports that one third to half of all people killed by law enforcement are disabled. The Advocates for Human Rights Organization indicates that police households are 2-4 times more likely to experience domestic abuse. Rainbow stickers on one car does not make the NYPD and the areas it patrols safe for all queer people, especially those of us who are the most vulnerable members of the community.

Searching for salvation from the hetero hypocrisy I ran for cover to the nearest queer bars only to find that our so called community is still not a safe haven for me. I experienced gay men grabbing my breasts. When I expressed my anger they only laughed and replied “I’m gay! It doesn’t matter.” I fumed and stomped my way to a dyke bar in Brooklyn in hopes of a better time. As a Bi, Femme woman I’m always weary of dyke and lesbian spaces. Some of the most abusive and biphobic incidents I’ve encountered have been at the hands of lesbians. With the plans of simply sitting on a bar stool with a cold beverage in hand, free of police with large guns, blood thirsty news crews, and tit-grabbing, misogynistic gay men I figured I was safe. Much to my surprise people were friendly and I finally began to relax and enjoy myself. I was even flirting with a very cute woman with an adorable Brooklyn accent. Then her white and settler privilege tears began to flow. After mentioning that I’m Native she responded with “You don’t look Native.” I explained to her why this was an inappropriate, racist, and colonizing statement which she then followed with “You don’t know what I’ve been through. I’ve suffered from reverse racism so many times.” I could feel my rage boiling up and ready to explode. Instead of finding any sense of internal peace or healing I found further victimization of the erasure of myself and my people. I found myself spinning out of control and having a horrific pain attack with Xanax, a nip of bourbon, and a phone call to my best friend to talk me down.

It’s now not even two weeks since NYC Pride came to a close and the body count and victimization for queer, women, and people of color has continued to tick up. Josie Valadez Fraire, a Xicana, was a victim of excessive force and arrest by Denver police on July 1 for burning sage — a safe and sacred part of many Indigenous religions — at a Trump protest. On July 4 the NYPD arrested and dragged, Krys Fox, a queer man of color, off Jacob Riis Beach, a primarily LGBTQI2Spirit beach. RoyLynn Rides Horse, a Native woman who was beaten, burned, and left for dead on the Crow reservation, died on June 28. Captured on video are the murders of Philando Castile and Alton Sterling. Both men were murdered by the police in cold blood. Sterling was killed by the Baton Rouge police on July 5 and Castile in Falcon Heights, MN, a suburb of St. Paul, on July 6. On Thursday, in Dallas, Micah Xavier Johnson opened fire and killed five police officers and wounded seven before the DPD killed him. While this wasn’t the answer to what plagues us, the psychic pain and constant danger of living in a world that thinks so little of us is a burden too heavy to carry.

There have been countless other victims of abuse at the hands of the state whose stories we’ll never hear, but that doesn’t make them any less valid or important to us as queer people. What I choose to take away from my trip to NYC is from a poster of Marsha “Pay It No Mind” Johnson that was at The Stonewall Inn vigil. Johnson was a trans woman of color and a leader in the queer and trans liberation movements. This poster of her says something that will forever resonate with me as a queer person with multiple oppressions, as well as privileges: “No Pride for Some of Us without Liberation for All of Us.” This saying rings true for me now more than ever. We cannot allow any of our queer family to suffer, whether it’s due to racism, sexism, or ableism. What harms one of us, harms all of us. Yes, we deserve to kick up our heals and dance our troubles away, but we can’t forget that we are a long ways away from liberation for all queer people and as long as the souls and lives of some of us are treated as meaningless then we will all remain meaningless. 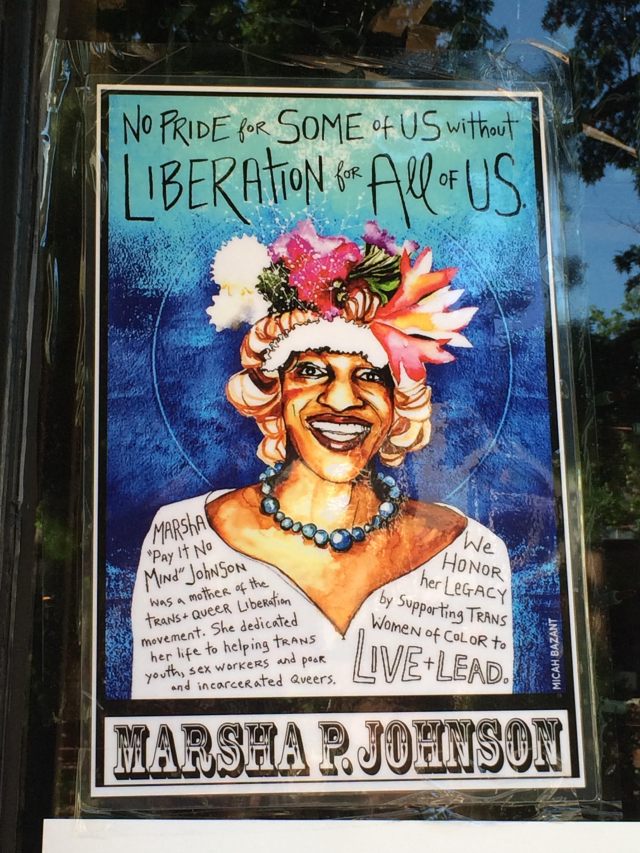 Jen Deerinwater is a classically trained vocalist vagabond with a love for books, well made martinis, and antique maps. Jen has several degrees from over priced universities and the student loan debt to prove it. She is an out and proud Bisexual, hard Femme, Disabled, and is mixed race Tsalagi-a citizen of the Cherokee Nation of Oklahoma. After several years spent in the trenches of American politics you can now find her stirring the pot of radical discourse online. Follow her musings and soap box rants at JenDeerinwater and jendeerinwater on Instagram.

Jen has written 1 article for us.