On my 14th birthday, with a fresh gift card burning a hole in my pocket, I found myself standing before the fledgling Young Adult section at Barnes and Noble, picking out Empress of the World by Sara Ryan. I read the back of the book and was excited because it was about kids at an academic summer camp, and I was about to go to an academic summer camp.

The names of the main characters, Nic and Battle, were gender neutral enough that I projected heterosexuality onto them, not yet knowing that gay YA lit was something even there to be looked for, but when I showed it to my mom, she said, “Mad, this looks good —I’m pretty sure it’s about two girls. You know that, right?” I hadn’t yet articulated anything definitive about my sexual orientation to myself, but I remember feeling a little like I’d been caught in the act. I played it cool and shrugged. I knew my mom didn’t care, and mostly I just felt subversive because the gift card I was going to buy it with had been given to me by one of my most conservative friends. That’ll show her for being so homophobic, I thought to myself, though I knew I’d never tell her. Empress was my first gay YA novel.

I don’t remember ever talking with my mom about Empress again. I don’t know why she pointed out that it was about two girls. I don’t know if she noticed how many times I read it. But my mom was always supportive, so much so that I came out to her by accident, assuming she’d already figured it out. My bigger concerns with coming out were related to my friends.

We got home from Barnes and Noble and I fell into the book, lost amidst Nic, Battle, Isaac and Katrina, four friends made fast on their first day of camp. Isaac and Katrina are infatuated with each other, Nic and Battle are infatuated with each other. They are all bad at telling each other their feelings, until an organized hike goes awry, Nic twists her ankle, Battle brings her an ice pack, and they kiss. Isaac and Katrina, their own crushes unacknowledged, don’t miss a beat. The four of them hang around campus doing homework and making fun of each other and avoiding bad dining hall food. Nic and Battle hold hands and kiss sometimes. Teen drama unfolds. Identity and sexual orientation play a huge role in the story, but the only people who are less-than-nice about it are clear villains. I’d never experienced a dynamic like that, and I wanted it.

At the time that I first read Empress, I was becoming more and more isolated from my friends at school. We had spent a lot of the beginning of eighth grade, which coincided with the Bush/Kerry election, having lively “debates” at lunch, which mostly meant I would defend the right to get an abortion while everyone else shouted at me. I was also afraid they were all going to disown me if I turned out to really be gay. My journal entries from that time are mostly political treatises (“I want equal rights for EVERYONE, including homosexuals.”), discussion of my life aspiration of becoming a congresswoman (my career path has since diverged), and my deep love of Jethro Tull (nothing’s changed there, TBH), but then there’s also this, from June 2005:

Empress of the World is the best book. I really relate to Nic. She’s sort of lost with friends. She’s quiet, but ambitious, and strong in her convictions. With her relationship with Battle, she’s happy with it because she’s in love, but she’s still confused about her sexuality, like I am. She faces problems with tolerance like I would, if I’m a lesbian. I don’t know. It’s confusing, and in the world and town I live in, it’s scary. I’d lose all the friends I have because their religion tells them that homosexuality is a sin. I don’t get it. 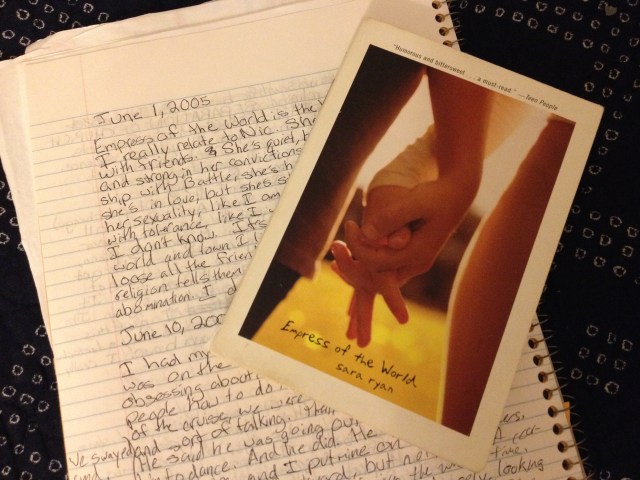 Empress gave me a roadmap that allowed me to be confused about my “label” while also letting me figure out who I wanted to be kissing, which was mostly girls. It gave me some language to start understanding desire. Nic’s self-conscious but diligent journaling throughout the book indulged and validated my own propensity to analyze the reasons behind everyone’s behavior.

Nic and Battle’s romance is delicate and sweet. You can feel the tension of their desire mixed with shyness: “If she wants a back rub, is it too much to kiss the back of her neck?” Nic wonders to the reader. I can feel my 14-year-old self just dying to have someone to share that gentle intimacy with. And of course, I wanted to know more about how they were being intimate. I wanted erotica, let’s be honest. But YA books don’t work that way, so I had to read between the lines as Battle and Nic’s physical relationship escalated, climaxing at a nighttime excursion to the woods: “all of it gets blurry and soft until all that’s left is sensations.”

I longed for those sensations, and I read Empress over and over, searching for new answers to make my life as a baby queer a little easier, a little less isolated, a little less filled with unrequited love and unfulfilled desire. Empress became a guide, a comfort, an aspiration, and a shield.

Reading Empress now, it’s still a comfort, still a book I’ll pull of the shelf and flip open at random to calm me in the middle of the night, when I’m looking for something familiar to hold my focus. These days, though, I feel more connected to Ryan’s perspective as the writer than Nic’s as narrator. I’ve experienced the love, the intimacy and the heartbreak I yearned for as a kid, and now I’m drawn back by the sweetness of the story. I appreciate the subtle misandry directed at the boys in the group of friends Nic falls into (“They sit across from us and spread out in a boy like way, taking up the maximum possible amount of space.”), and at the arrogant (and ignorant) boys in her archaeology class. I can also see how Ryan quietly but deliberately gives the reader a window into different queer cultural milestones: Battle shaves her head in defiance of her parents; Nic learns Isaac has gay aunts and is overjoyed to hear about adults like her actually existing. But Ryan also pushes back against queer tropes and stereotypes: while Isaac and Katrina good naturedly try to impose labels and butch/femme dynamics onto them, Nic and Battle shrug them off, not sure if they really fit. I think I was frustrated with this as a kid, really wanting Nic and Battle to take a definitive stance so that I might know what stance to take for myself. But looking back, I appreciate the ambiguity; I think it helped me be better at accepting the more fluid pieces of myself and others.

Empress came out at the height of my Harry Potter obsession, and at the dawn of the age of prolific young adult writers who turn out volume after volume chronicling the same characters or at least the same themes. I wanted a million more volumes of Nic and Battle’s story. I wanted more Sara Ryan on my shelf than Sarah Dessen. I watched Sara Ryan’s website like a hawk, looking for any possible sign of what became of Nic and Battle when they left their nerdy summer camp.

Six years after Empress, Ryan finally published The Rules for Hearts, a smart, lovely book that speaks to the angst of being totally enamored with someone who is not really available. It’s more of a companion more than a sequel, focusing on Battle, but not about Battle’s life with Nic. While my young teen self still itches for more of Nic and Battle, I’m satisfied that Empress of the World stands alone, a simple, sweet story I found by chance, but that I knew was mine.