Our Autostraddle Plus series, Interview With My Ex-Girlfriend, is a big hit with all of our A+ subscribers, so our senior editors decided to riff on that and have me interview my actual girlfriend, Stacy. They came up with the questions and Stacy graciously agreed to answer them. Our cat, Quasar, almost participated but then changed her mind at the last minute because she’s very busy and important.

Okay, question number one. How did we meet?

Well, you were writing Skins recaps, so that’s how I knew about you. So I tweeted you. You claim the first tweet I sent you was a photo of Paula Deen riding a stick of butter —

No, no. Paula Deen getting hit in the face with a ham.

I’m not mad about it. I’d say it worked out just fine. 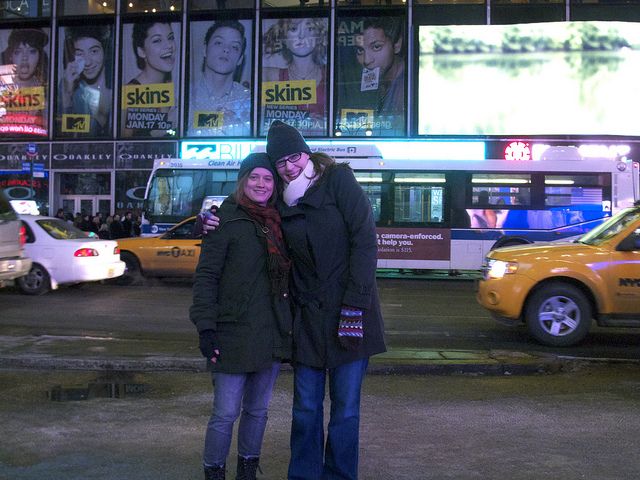 The night we met, long before I understood Times Square as a NIGHTMARE HELLSCAPE.

Question two. Was I different in real life than I was on the internet?

Really? I guess my personal brand is super authentic!

I can’t really put myself back in the headspace of only knowing you from the internet, but nothing about you struck me as being off-brand.

That’s true. We did stay out until 4:00 am talking about Skins the night we met.

And you got to know me really well that night because you got to see all my repressed anger issues because we were waiting in the snow for the US Skins premiere party and the cops busted up the VIP line and then we ended up in that cab and I had no idea where we should go, so we went to Cubby Hole and the bartender tried to serve you a Bud Light and I had finally had it. I was like “NO! SHE’S NOT DRINKING THIS SHIT!”

That was my first time in a gay bar and my first time in a New York bar, full stop; I would have just timidly taken whatever that bartender handed me. I had such heart eye emoji face when you sent it back. You’ve taught me so much about standing up for myself. And I haven’t had a Bud Light since then.

Oh, I don’t know. Whatever Brooklyn barbecue on a stoop when I reach into a cooler and it’s that or a can of Rolling Rock. Rolling Rock in a can, specifically, is the most revolting thing I have ever tasted. 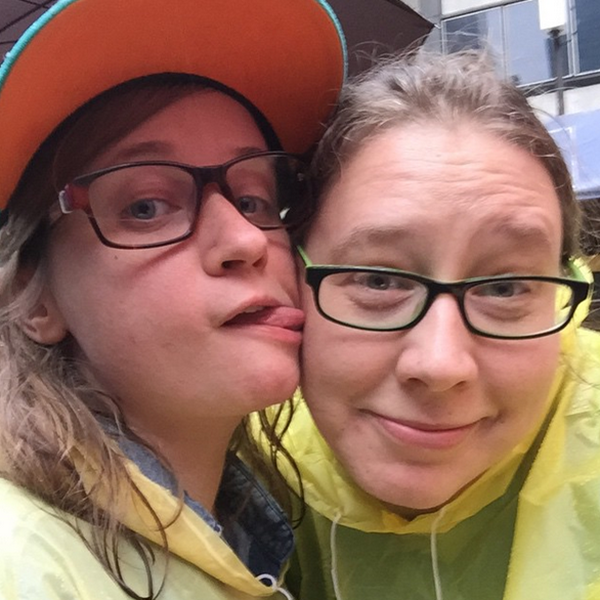 When did you know our relationship was special or different? That it was worth pursuing more than just like buddies?

For me, I don’t think there was a specific moment. Our love is like a rolling rock, tumbling down a mountain, gathering love moss. No, for real. It was like that. I didn’t have some kind of Don Draper Mad Men finale moment. DING! It really was a slow progression of small things. The more experiences I had with you, the more experiences I wanted to have with you. Talking about our lives, books, TV shows. I mean, I knew you were special, right away, and that alone made it worth pursuing — but I didn’t understand that we were special until later on.

What surprised you the most about me when we moved in together? Because we dated long distance for a couple of years.

I actually don’t think I was surprised by anything when we moved in together. The reason that question is tricky for us, or for people who may have had a similar experience as us, is that with a long distance relationship, when we did spend time together, we were together for long stretches. It’d be a week where I lived in your house with you, and then you’d come to New York and do the same with me. We went grocery shopping, we learned each other’s quirks, how we liked to sleep. We never went on dates where we’d meet for dinner and then go back to our own places. It’s like we were practicing living with each other, and then going back to our own spaces to process it, and then coming back together to practice again.

Okay, this question is from Riese. Do you ever worry that I don’t sleep enough?

Yes. I know people use the word “literally” liberally, but I literally worry all the time that you’re not getting enough sleep, and have worried about it every single day of our life together.

Oh. I did not know that. I guess this is a good follow-up question, then: What’s the hardest part about being partners with someone who also is married to the internet?

For you, I worry because your heart is so open and the internet can be such a monster. Autostraddle is really different than the other places you’ve worked, obviously, and that’s a relief, but social media can be terrible. A lot of people on the internet only care about their own agenda, only see things in black and white, and you are all about seeing things in grey, and I worry that you take some of the stuff to heart that you don’t necessarily need to take to heart. You want everyone to know they’re heard and loved, but some people just don’t deserve your attention. But in terms of how much you work, because my work is as time-consuming as yours, we basically never argue about our careers. We’re both work-a-holics. My worry is more about the culture of the internet beating your gentle heart down.

What’s your favorite thing that we do together?

Everything. We were just talking about this last week. Everything I do is better when I’m doing it with you — except for, like, going to the bathroom. Which I prefer to do alone. But everything else! 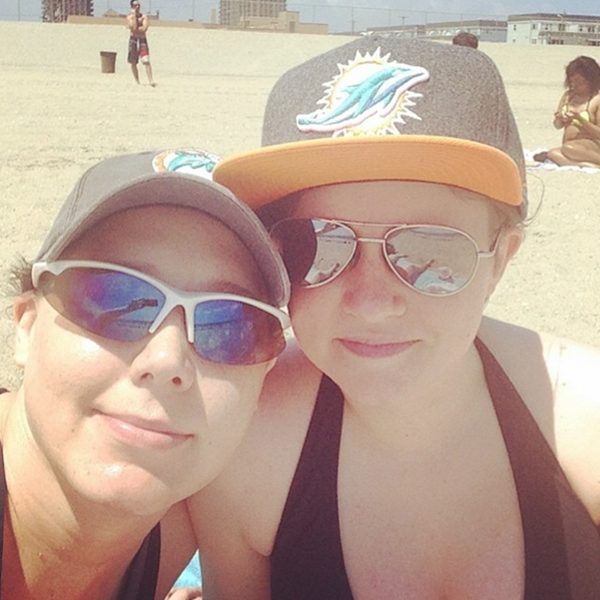 New York has beaches, did you know??

Of all the TV shows I’ve covered, which one do you hate the most?

Do you think I talk about Harry Potter too much?

No! I talk about the Miami Dolphins all the time and that has no redeeming value to society whatsoever, so it would be the worst hypocrisy on earth for me to criticize you for caring so much about a thing that has enormous value to our culture. We’re rereading the books together, right now, in fact.

I’m worried that I wouldn’t have been at Hogwarts because what if I was a Squib?

Baby, you are the brightest witch of your age!

Um, Hermione has a few things to say about that.

Okay, here’s what I think. If we’d met at Hogwarts as teenagers, we would not have fallen in love, because of both of our personalities. We would have been in different Houses. You’re a Hufflepuff. I’m a Gryffinclaw — so you say. I do wonder sometimes if I’m actually a Slytherin, which is fine, but I’ll tell you right now that I wouldn’t have left during the Battle of Hogwarts, MCGONAGALL. So, but, yeah, I don’t think me as an adolescent would have fallen in love with the you that I know now. And I think the same is true of what I know of you as an adolescent. However, as professors at Hogwarts, yes. Absolutely. We would have totally fallen in love as Hogwarts professors.