My first kiss was in a public bathroom. It was a seventh grade dance. Snoop Dogg was blasting from the six foot high speakers where kids were grinding up against the walls of the cafeteria.  Some sixth graders shouted “Ew, gross!”as I pulled this dude-bro I had been dancing with into the little boys room and stuck my tongue down his throat.

I didn’t yet know that bathrooms would become my obsession. 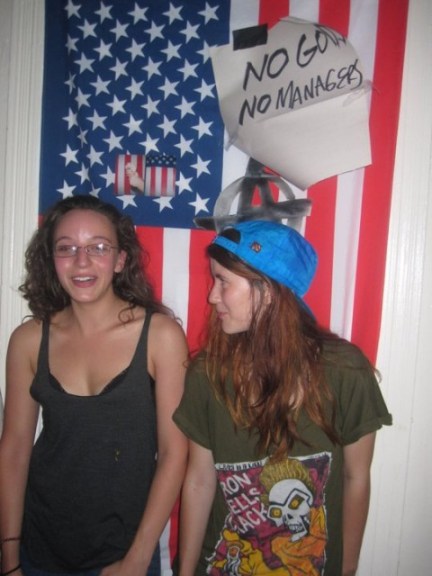 The author and her functionally lesbian roommate.

Heterosexism: a system of attitudes, bias, and discrimination in favor of opposite-sex sexuality and relationships.

You know how people are always saying that “girls always go to the bathroom together?” When it comes to bathroom sex, that idea can work to your advantage. Lesbian bathroom sex: brought to you by heterosexism.

My functionally lesbian roommate is judgmental of my bathroom sex excursions. Since we started living together she has become increasingly radicalized. I’m always in the process of trying to shift her paradigm to accept my experiences and take risks within her own social and sexual life (ahem, today she screamed “I don’t like femmes!” across the Brooklyn College quad when I referenced a femme who tried to kick it to her).

But femme invisibility has its advantages. Sycamore on Cortelyou Road and Westminster Street is the queerest straight bar I’ve ever been to in New York City. It’s a usual hangout for Brooklyn College faculty, students, and staff, and Kensington neighborhood folk. The bartenders are cute as hell, there’s a delicious beer selection, and there are two single-stall bathrooms. If you’re heteronormative, you might not notice through the dark-ass lighting that there are trans-folks making out in the booths. But it can be a hit-and-miss spot: sometimes there are dude-bros being mad homophobic and sexist. Overall, I like it because when I roll through with my queers we get free drinks and hook up with our best friends.

No one gives a fuck at Sycamore because of this air of heterosexism. You can go fuck a girlfriend in the bathroom and everybody just thinks you are chatting about that guy who bummed a cigarette from you in the backyard.

But bathroom sex can also result in a lot of “dude, not cool” sex shaming, which is whack.

Most of my relationship with slut shaming is inextricably tied to bathroom sex shaming. I like sex, and if you have sex with me, you should know that when I want to have sex, I want to have sex right now — when I want it, where I want it, and how I want it. If only somebody had told my twelve-year-old self that “public sex is radical sex!” It’s sexy, cool, and there’s totally nothing to be ashamed of. If I had known years ago that orgasms and public spaces equaled empowerment then I would have come out as bisexual a lot sooner.

One night at 773, a bar on Coney Island Avenue, my boo and I were making out and smoking cigarettes, having a grand old time with ten of our closest friends who were all playing darts and dancing to the Beach Boys. There was no one in the bar but our crew and the two of us wanted it pretty bad (as per usual). We fucked in the Men’s Room. (Yes, they have gender segregated bathrooms). And a good friend walked in on us, because the lock was broken — they were traumatized and pissed off because “all they wanted to do was take a piss” and when we finished we made the ultimate walk of pride.

The must-haves for bathroom sex are as follows:

+ Keep your shoes on! its not that important to take all your clothes off when getting down and dirty in the bathroom — be it boots or sneakers. Take my advice.

+ Leverage is key. Whether it’s the sink or the toilet seat or the tampon dispenser, get your knees, legs, ass up on something that gives you some more support, it makes it fun and kinky (try the top of the toilet, the tank).

+ Be as loud as you fucking want. The important thing about sex in bathrooms is to especially turn your partner on, and you as well, and to not give a fuck about what anybody else thinks — which you probably don’t, which is why you’re having bathroom sex to begin with.

+ Have a cute one-liner (suggestions: “mind the doorknob,” “we’re out of toilet paper,” “someone just had sex in this bathroom!”) for when you emerge from the stall or the family style one-roomer.

I was at Four Faced Liar on West 4th Street after a hyper-sexualized night at Rum Sunday (a local get together at El Cobre on Avenue A). We all ended up at a West Village spot to grab a Guinness before calling it a night. I had sex with someone in the bathroom — and while the small room with a toilet and sink would have been more conducive to oral sex and foreplay because of the great positioning of the sink and toilet paper dispenser, we were interrupted so many times that it really wasn’t worth it. If it doesn’t turn you on to be rushed (which I was), the high risk factor isn’t that worth it.

Ultimately, my experiment with bathroom sex is through the lens of this: how can you create a lesbian femme sex symbol? Lesson learned from this Brooklyn femme: be what you wanna jack off to. For me, I can’t help but sing Lana Del Rey (#LanadelGAY) while I write this. I wanna be the long-haired, bobby-pinned, lipsticked, combat-booted, pencil-skirted, hickey-ed, pink-streaked at the back (just so you know I’m a dyke), and HOT HOT HOT girl that subverts traditional interpretations of femininity. And by aggressively fucking women in bathrooms and liking it, I am.

Isabelle has written 1 article for us.