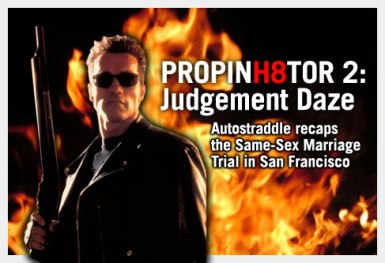 Welcome to Day Two of our Magical Funtime Journey into the pulsing heart of the Trial over Proposition 8, a.k.a., our lives, values, hearts & minds. Firstly, we’d like to give a BIG UP to Rick Jacobs at the Prop 8 Trial Tracker for giving us pretty much the best up-to-date info on this as it proceeds. Now we will regurgitate it for you.

Last Time on “Judgement Daze” – On January 11th, the H8ers, represented by Charles Cooper, gave an opening statement about how heterosexual marriage promotes good breeder values and how discrimination isn’t actually discrimination. The Lovers, represented by Ted Olson, explained how Prop 8 hurts people and how everybody who’s anybody is coming to San Francisco to: a) wear flowers in their hair, b) spread the good word/provide proof. Kristin M. Perry, (who brought the case to court) talked about falling in love with her partner, Sandra B. Stier, and said she tried boys and it was gross!

Part One: In Which Nancy Explains the History of Marriage and why the H8ers are all wrong about it. 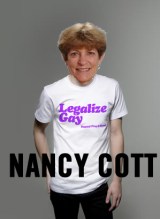 Higher Ed: Harvard history professor Nancy Cott testified that procreation has never been the central purpose of marriage in the United Sates. This is a big deal because of a statement made by the The Prop H8ers that is central to their case:

“And the purpose of the institution of marriage, the central purpose is to promote procreation and to channel naturally procreative sexual activity between men and women into stable enduring unions… it is the central and we would submit defining purpose of marriage.” (-h8ers)

Ms. Cott has written a book about the history of marriage in the United States, and her testimony is super important ’cause, amazingly, “unlike other marriage challenges, the suit is being decided in a full-blown, fact-finding trial intended to explore historical, psychological and religious meanings of marriage, the nature of sexual orientation and the history of discrimination against gays.” What does Cott have to say about the “historical, psychological and religious meanings of marriage? Well um…

“Procreation is one of the purposes of marriage. The larger purpose of marriage from the state’s perspective is the ordering of the household, the contribution to stability and governance… Looking at this historically, it’s the regulatory purpose of marriage. Husbands were economically responsible for their family/spouse. The point of marriage was so the sovereign could govern in smaller units, the household. We no longer assume that the single head of household has all the power, especially since 1920 when women got the right to vote. (BAM!!!!) The institution of marriage has always been as much about supporting adults as it has been minors. The proponents emphasize the minors’.“

Also, apparently in their opening statement Yes on 8 said that “Racial restrictions were never a definitional feature of the institution of marriage?” Is that, um, crazy? Can I get a witness? Yes, I can! FROM HISTORY! 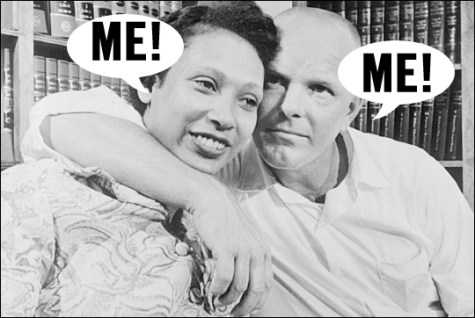 Hey, what’s up, Nancy Cott is here too, in this time zone and everything. What’s she got to say? 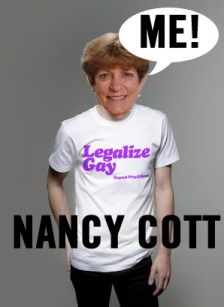 “There were many restrictive laws that prohibited Asians from entering the US. At the time the restriction laws were passed, there were already 100,000 or more Asian men in the west of the US, but there were very few Asian women. The restrictions against marrying white women made these men permanent bachelors. In 1907, a US restriction in law said that any American woman who married a foreigner would have to take his citizenship and lose her citizenship “even if she descended from the Mayflower.” A German, for example, could become a citizen through naturalization. But Asians were never eligible for citizenship. California invented this concept of Asians never being eligible for citizenship. If an American woman married an Asian, she could never again become an American [citizen]… Parallels between these restrictions and same-sex marriage restrictions exist… [opponents of interracial marriage] did say that interracial marriage would degrade their own marriages and make marriage less popular.”

While we think a lot of the parallels between the Gay Rights Movement and the Civil Rights Movement are not really fair, we do think Cott did a great job of making that specific parallel right where it’s relevant. Yahoo! Thanks for undermining the fantasy of marriage as an institution made out of non-discriminatory universal man-on-woman-loving sunshine and rainbows, girl!

h8er Rep Thompson tries to get Cott to say that same-sex marriage will destroy sanctity of family, bring society to its knees, cause earthquakes and birth defects, etc. STAY STRONG, NANCY!

Also, this happens: “Thompson reads from her Iowa deposition that says that since gay men and lesbians have married each other, the law is literally not against homosexuals marrying.” OMG OMG this feels exactly like having to sit through Thanksgiving dinner with my Dad, I can’t believe you’re actually allowed to say that and have it be “evidence.”

Also we are talking about Bill Clinton’s infidelity? Seriously? I can’t deal with this, it’s too much, but you can read the whole section of the liveblog here.

Basically, the coolest part is that the Judge is asking Cott really good and insightful questions, like how the state first became involved in regulating marriage and why, and it is really heartening and nice to have someone finally care about that and to think that they might even take it into account when deciding whether or not you can legally marry your f*cking wife. Right?

Part Two: In Which Chauncey explains that the H8ers have been
H8ing FOREVS and this sh*t is whack! 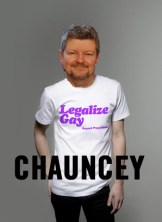 Expert on gays: Yale historian George Chauncey is called as an expert witness to explain “the campaign to enact Prop 8 as part of a historical trend of demonizing gays and lesbians.” Ohmigod you guys, this is really exciting, he is talking about sodomy laws and gays being arrested for being gay except they called it “disorderly conduct” & institutional discrimination – he’s establishing the fact that America has systematically and intentionally made our lives painful and difficult, and that Prop 8 is only one little blip in that big ol’ timeline of h8erade!

“Like most outsider groups, there have been stereotypes associated with gay people. Sermons railed against homosexuals. Campaigns were led against gay rights recently. Doctors assumed homosexuality to be a pathology which extended stereotypes. A lot of the research focused on gender nonconformity. Thought that homosexuality [was a] reversion of gender roles. Doctors opined that women should not take certain jobs or smoke cigars or vote because they’d take on pathology of lesbians and hurt their ability to bear children. Then in the 1930s, they imagined homosexuality to be arrested development. They were heterosexuals stuck in the homosexual stage, which reinforced the stereotype of immaturity.”

I almost feel like I’m watching the West Wing Edition of the Same-Sex Marriage Trial! All these smart people making solid points, I’m ready for Jed Bartlett to tell somebody off. I’m sure Maggie Gallagher’s at home rolling her beady eyes at this, and I suppose it could come to nothing … but isn’t it so VALIDATING to hear this all said in court? Like in some way, someone is finally being held accountable for all this bullsh*t? Or that maybe there’s someone out there reading the liveblog from their little bomb shelter or wherever they’ve been since the 50’s who never knew that once upon a time ladies got arrested in bars for having short hair and now they DO know ’cause someone just said it under oath and now they’re outraged! No?

Part 3: In Which We Travel Through Time And Realize How Far We Haven’t Come, But Should Probs Change Soon

Ok, it’s time travel time again so that we can look at how The H8 of Yesterday = The H8 of the Future. Y’all know about Anita Bryant? She’s the genius masterbrain who developed many of the anti-gay standards & slogans that are still used today. She’s a real pioneer. Here’s a little recap: 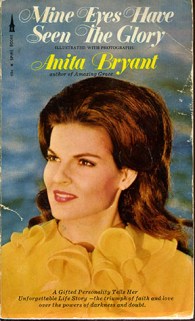 Chauncey talks about “Save Our Children,” the anti-gay campaign led by our dear Anita Bryant in Dade County, Florida in 1977 (1977! That recently!) A classic quote from this classy lady:

“Some of the stories I could tell you about child abuse and recruitment by homosexuals would turn your stomach. This recruitment is absolutely necessary since homosexuals cannot reproduce themselves so they must recruit to swell their ranks.” -Anita Bryant

We then talk about other anti-gay campaigns, like Briggs in CA, etc. to compare these campaigns to the ones Anita Bryant controversially raged. And then, we get to this:

H8ER/Terri Stewart (lawyer for the plaintiffs): Are you familiar with Prop.8?
Dr. George Chauncey: Yes…  as a historian I have to say that the wave of campaigns we’ve seen in the last decade is an extension of the previous campaigns.

Get it, girl! Chancey talks for a while about how the Yes on 8 campaign operated on the same principles of the Predatory H-omo-seck-shul that Children Need To Be Protected From as Save The Children and other campaigns that we like to think of as outdated and over-the-top now. Also, oh man, they finally talk about the Yes on 8 ads!

H8ER/TS: Do you believe Prop. 8 ads perpetuate the stereotypes of the history you describe?
CHAUNCEY: I think they do… (while looking at Yes on 8 PSAs) same messages. [he’s describing the message here:] We have to protect our children from exposure to gay people, fight gay marriage which is the full recognition of our rights. Underlying message here is something about the undesirability of homosexuality; we don’t want our children to become this way.

Afterwards, The H8ers gets to cross-examine Chauncey for 10 minutes, and shit gets really confusing. They start talking about the definition of homosexuality, and the Prop 8 lawyer brings up how it used to be more culturally normal for men to have sex with men, and I feel like usually homo-haters pretend that that isn’t true, but I think he’s trying to make a point? “Earlier culture allowed men to have sex with men without the need to identify as homosexual in the modern taxonomy. There were many men who had same sex relations who went on to marry women.” I am not sure what that means, perhaps this is affirmation for her own shammy marriage or a plug for Exodus International.

And then we’re done for the day! There is some more talk about what documents are going to be reviewed tomorrow, whether or not they are “secret” or “controversial,” I guess we will find out tomorrow!

This is going to make a really good musical some day, we can call it INHERIT THE WIN! 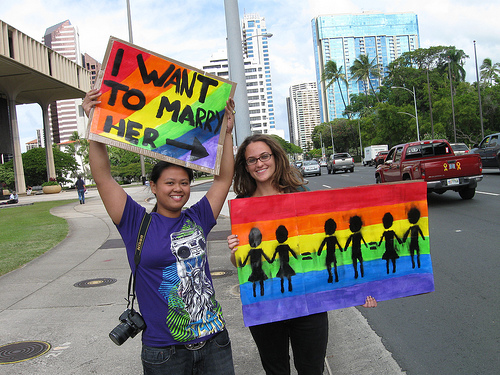 Cute Lesbians of the Day

Oh also, then our two lawyers went on Rachel Maddow to talk about how it isn’t a liberal or conservative battle, just an issue about American rights & values and why it’s important to take it to the federal level.