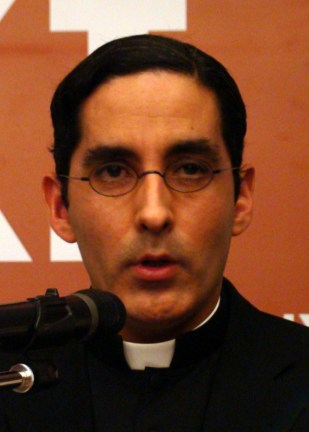 “Something terrible happened this past weekend in Maryland,” wrote blogger Ann Werner on AddictingInfo.org, “and the fact that it was Maryland, a state that has just proclaimed that all are equal and has enshrined this concept into state law, goes to highlight the lengths to which the right will go [to demonize gay & lesban people].”

This past weekend Werner attended the funeral of a blood relative of Werner’s ex-husband. Also in attendence at the funeral was the deceased’s lesbian daughter, “Barbara.” Werner describes Barbara as kind, smart and funny, a woman who “works hard promoting the arts,” “pays her bills, cares deeply for her family” and “loved her mother and her mother loved her right back.”

In fact, Guarnizo covered the bowl and said “I cannot give you communion because you live with a woman and that is a sin according to the church.”

That seems to be roughly the verbal equivalent of pouring the entire world’s salt supply into an open wound, doesn’t it?

Later in the service, when Barbara was delivering her mother’s eulogy, Father Guarnizo actually left the altar lest he be stuck up there with a lesbian. After the church service, Guarnizo told the funeral director that he’d be unable to deliver a final blessing at the gravesite becuase he “felt sick.”

In her post, Werner calls on “Christians of all stripes to stop and think about the teachings of the Jesus they proclaim to love so deeply and reverse so much.” Werner spent twelve years in Catholic school and says “the Jesus I was told about would never have turned away anyone for any reason and certainly not on the occasion of burying a parent. Fr. Guarnizo has a lot to learn about Christianity and the Catholic Church has a lot to learn about the teachings of Jesus if behavior of this sort is tolerated.”

She’s right that the timing of this tragic decision of a religious leader to make what was probably already one of the worst days of Barbara’s life into an even more soul-crushing event is particularly jarring due to Maryland’s recent equality-advancing measures.

See, on Thursday, a week after Maryland’s marriage equality bill was passed by the Senate (25-22), Governor Martin O’Malley will sign the bill into law, making Maryland the eighth state to legalize same-sex marriage. “All children deserve the opportunity to live in a loving, caring, committed, and stable home, protected equally under the law,” said O’Malley, which is a very nice thing to say! (Sidenote: Does marriage automatically produce children? I had no idea!)

The measure is set to go into effect in January 2013, which still gives opponents a chance to challenge the measure via referendum in November, Prop 8-style, which will undoubtedly be a delightful experience for everybody involved. Anti-equality crusaders told the AP that they’ve already begun gathering the nearly 56,000 signatures they’ll need to get their super special amendment onto the ballot.

Because if there’s one thing we know by now it’s that against all odds, there will be haters. Father Marcel Guarinzo is actually a particularly outspoken right-wing religious figure in the area — he is a prominent anti-choice activist who calls abortion clinics “veritable death camps” and lately has been participating in weekly protests at a clinic in Germantown he claims offers “late-term abortions.” He and other anti-choicers harass women visiting the clinic and hope their protest will eventually shut it down. “If Roe v. Wade continued for 20 more years in our community, we still intend to make it impossible for any abortionist to operate,” Guarinzo told CBN News in January.

A blogger at “Les Femmes”, who was not at the funeral and knows nothing about it besides what she read in the news about Guarnizo’s actions, wrote a post in defense of Father Marcel Guarnizo, in which she speculates excessively and declares:

“Obviously the daughter had to be flaunting her relationship. Otherwise, how would Father know she was a lesbian? Was she there holding hands with her lover? Did she talk at the wake about how grateful she was that her mother accepted their relationship? Was the “eulogy” for her mother (when the priest walked out) really a celebration of lesbianism? “Gays” tend to be narcissistic and it wouldn’t surprise me at all if the entire funeral became all about celebrating the disordered relationship.”

On February 12th, the Pastor at Saint John Neumann Catholic Church, Reverend Thomas G. LaHood, where Guarnizo is Parochial Vicar, released a newsletter to its parishioners regarding the General Assembly’s latest exercise in what La Hood calls “politicians dabbling in human nature.” The letter categorized same-sex marriage as reflecting a negative view of human nature and characterizes a world where people are unjustly “free to follow his impulses and desires as long as we do not hurt anyone else.”

This kind of thinking has grave consequences, the Pastor explains:

“…. the only moral question anyone has to answer in  regard to a particular action is this: “is this action what I  want to do and will it advance the fulfillment of my desires  without interfering with anyone seeking to fulfill his  desires?” This rule denies that any of us owes anything to  anyone else. This is the moral compass behind  contraception, abortion, no-fault divorce, in-vitro fertilization, embryonic stem cell research, slavery, and same-sex marriage.

The invocation of slavery and same sex marriage in the same category may seem startling. But, they both come under the same moral category.”

It’s true that we do owe things to other people — we owe them kindness and we owe them mercy, and certainly we owe them a respectful passing from this world to the next. After a day of neglect and cruelty, Guarnizo’s refusal to deliver Barbara’s mother her final blessings was simply the last nail in the coffin, so to speak. Shame on him.