Aria’s day is almost as weird as Spencer’s. Byron and Ella are getting remarried right goddamn now (despite invisible Mike’s invisible protests) and they want Aria to do the ceremony because “she’s the writer in the family.” Hanna has also been recruited to help; she’s designing and sewing Ella’s dress and also choosing the tablecloths for the reception. 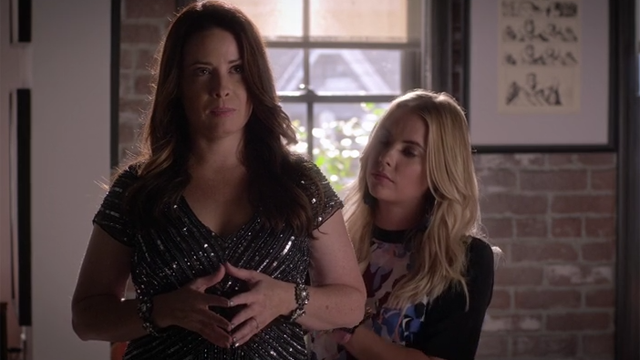 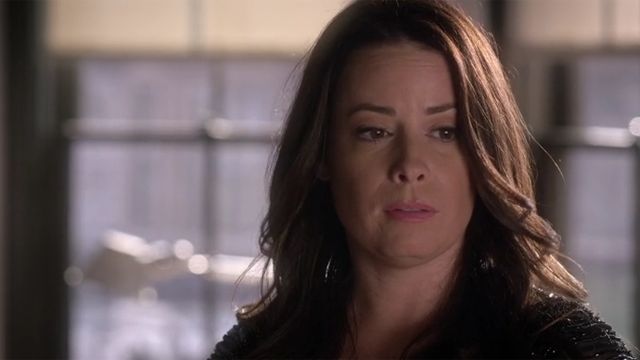 By helping Byron and Ella on their very special day, both Aria and Hanna come to conclusions about their own relationships. Hanna, who has been sidestepping either Liam or Jordan every time he asks her to set a date for their wedding, calls him up and tells him it’s going to be May 17. She’d kind of been holding out hope that she and Caleb were going to get back together, because if you leave your first love and they come back to you, it’s destiny. But Ella blows that theory out of the water because before Byron, she was into someone named Ricky, who no doubt had one dangly earring and drove a Trans-Am and thought he was the only person on earth who really got Kurt Cobain. Ella says high school romances never really last, and then you marry a guy who fucks one of his students who then ends up locking your daughter and their friends in the basement, and then you get engaged to a predator. At some point, if you’re a straight woman in Rosewood, you’ve just gotta settle.

Aria has a similar epiphany. She confesses to Ezra that she wrote his book and passed it off as his work, because of how he skipped town in a furious huff when they accused him of murder. He thinks about getting angry, but then remembers his entire history of being the wooooorrrst, and decides Aria gets a pass. Of course then he tells either Liam or Jordan that he and Aria were totally boning when she was his student, and either Liam or Jordan gets really upset about it. He doesn’t like it when Aria isn’t forthcoming with him, and when she lies by omission, which: You are in for a ride, brother. 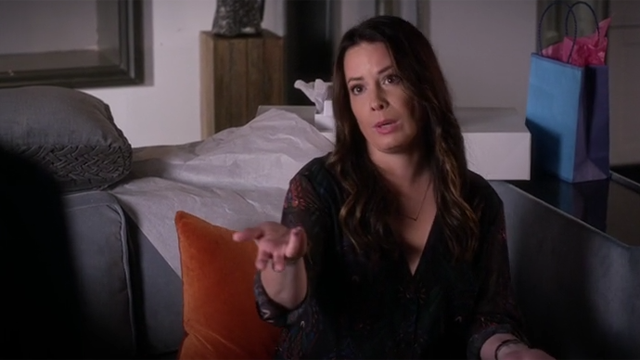 What if … anybody can be gay? 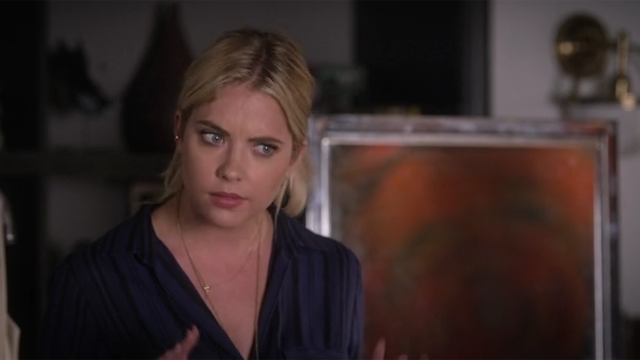 Are you saying *I* could be gay?

So Aria’s marrying her mom and dad, and she unearths the opposite truth from Hanna. Her future is either getting into a perpetual cycle of bullshit with a grown man who fucks his students, or she can try to make it work with literally anyone else. A piece of notebook paper. A loaf of white bread. An Amy’s frozen vegetarian burrito. All better options than Byron; therefore all options are better than Ezra. And so Aria chooses Liam. (Or Jordan?) 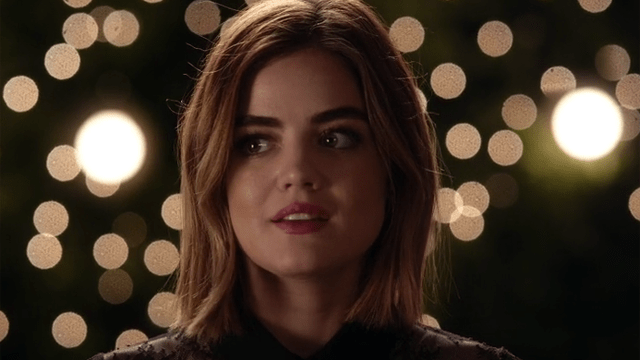 I hope you find the fullness of compassion and love in each other, like I have with Spencer. 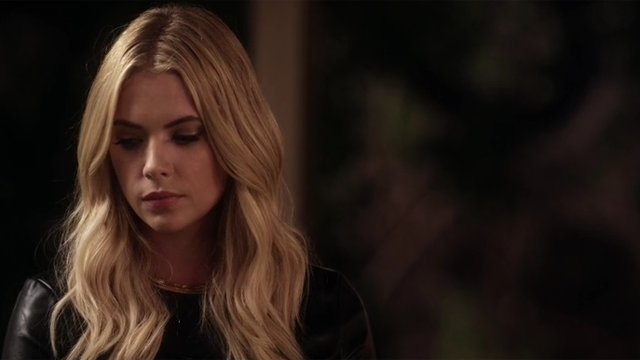 Alison is feeling wedding-y too. Not at first. It’s not how she begins her day. She starts it off with a text from Devil Emoji (by the way, the emojis this new A uses are ENORMOUS) asking if Dr. Rollins knows why Charlotte left Ali’s house in the first place the night she was murdered. Alison decides to just spill the truth to Rollins: Charlotte left because Ali told her about her affair with him, and while she was out, she got killed. Rollins, who just last week told Alison not to tell anyone about them, proposes to Ali on the spot. He’s already got the rings. (Does it seem to anyone else like the writers haven’t even read each other’s scripts this season? PLL has always been … less than seamless in tying individual writers’ ideas about these characters’ personalities and motivations together, but it is like whiplash this season with what someone says and does in one episode and then what they say and do in the very next episode.) Alison and Rollins go to Aria’s house because she’s a priest now, and they ask her to marry them together in matrimony.

Now. You will notice, I’m sure, that there’s one person missing from this episode. One person who has no tether to a romantic partner or to this theme of weddings or, just generally, to the plot of the show. It is Emily. First she meets a guy in the Hollis bookstore who, like her, is taking Psych 101 (is Emily starting college over at the very beginning??), but it turns out he is that reporter named Damian who was doing the scathing expose on the Hastings family. Emily realizes this with the help of her friends, but goes to meet Damian anyway. At a “diner” in the literal middle of the woods in the middle of the night. He is not there. No one is there. It’s just Emily and someone in a Jeep and for five entire scenes, Emily just runs around alone in the dark while this Jeep chases her. She climbs up onto the roof of the diner at one point and finds a hollow rod that was once connected to a rectangle piece. Charlotte’s murder weapon! On top of the diner! But of course she drops it to the ground, along with her phone, and the Jeep runs over them. 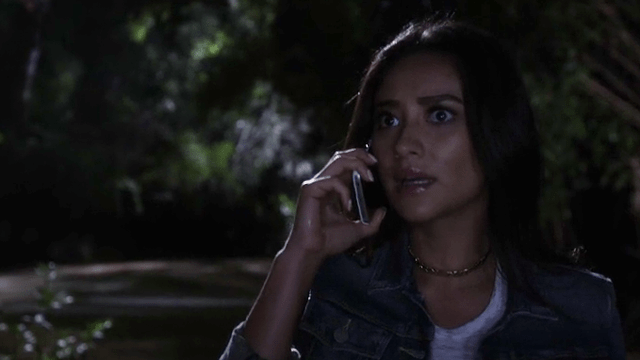 Hanna, what’s up. I’m rehashing our most overused plot line. 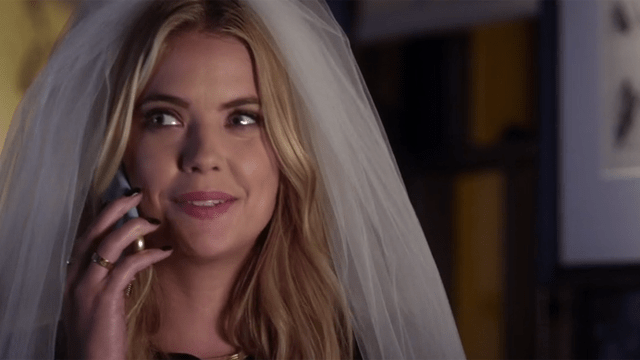 I THINK WE SHOULD GET MARRIED!

After being ostracized from love, Emily returns to Rosewood to proclaim that there are at least two Devil Emojis now. One of them, at least, is threatening to birth an army of Emily-shaped babies with her eggs and grow them into evil super-soldiers. Which makes more sense than getting killed by a suitcase handle, if we’re being honest.

The Risen Mitten enjoys a slice of wedding cake and struggles to program his new universal remote. Psychotic cyberterrorists, they’re just like us!

Heather has written 1244 articles for us.